The Classic Ride: Soaring into History 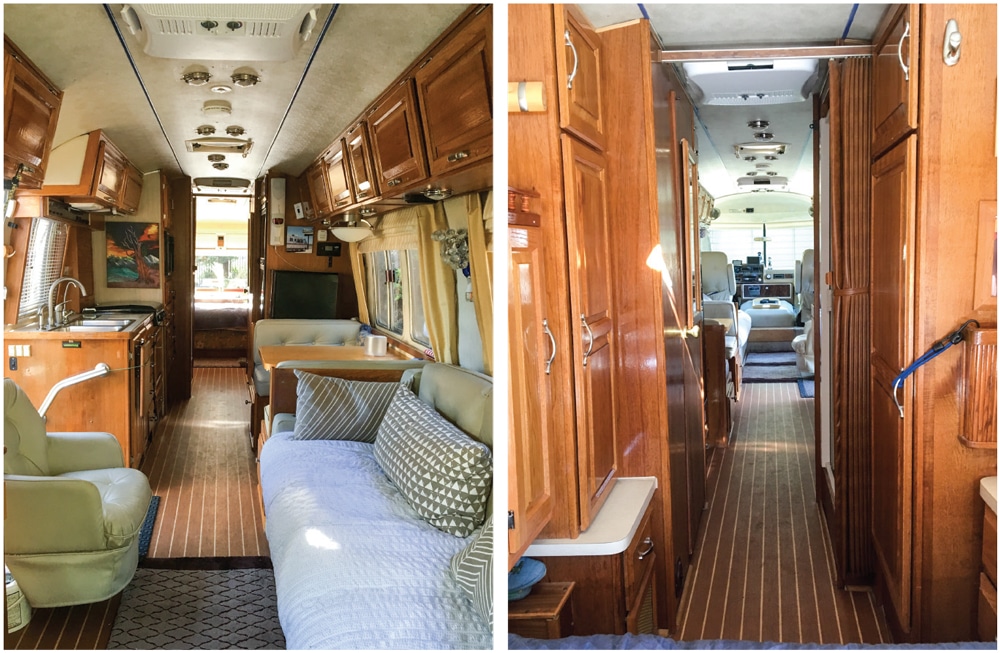 After an extensive restoration process, an iconic 1985 Airstream Class A motorhome is the perfect fit for an RVing couple looking to hit the road in their own slice of Americana

This article is the next in our series looking at motorhomes that have stood the test of time. They may have miles under their wheels, but they can still make dreams come true. Each has earned the right to be called “the classic ride.”

It is as close to flying as you can get in a motorhome.

Its smooth, futuristic aluminum body is based on a design by William Hawley Bowlus, builder of Lindbergh’s Spirit of St. Louis. Nicknamed the Astrovan, it transported every Space Shuttle astronaut to the launch pad from 1984 until flights ended in 2011. It is not enough to call it a classic – the Airstream Class A is a piece of American history.

It was this history, as well as the unit’s reputation for quality construction and durability, that drew Eray Honeycutt to the Airstream when he began looking for a motorhome for he and partner Simon Yen in 2004. As the owner of a marine-repair company, Honeycutt had worked extensively on refurbishing older vessels, and he had lived on a classic boat for eight years. He saw buying an aging motorhome as the same venture, “Except one floats and the other has wheels, but the same knowledge is required to keep it going,” he said. He was confident in his ability to take on a 30-year-old Airstream. It was just a matter of finding one.

The refinished wood cabinetry helps give the Airstream’s interior an elegant, rich feel.

Most people are familiar with the Airstream travel trailer developed in the late 1920s by Wally Byam. The company did not introduce Class A motorhomes until 1974, when it debuted a line of “painted Airstreams” under the Argosy brand. These motorhomes consisted of both riveted-aluminum skin and galvanized-steel panels in the front and rear atop a Chevy P-30 chassis. In 1979 the Argosy line was discontinued and the company began producing the shiny aluminum-skin Class A under the Airstream badge. By 1989, aluminum as a building material had become cost-prohibitive, and Airstream began production of a traditionally styled, laminated-fiberglass Class A motorhome introduced for model-year 1990 called the Land Yacht (there were already Land Yacht branded towables in the Airstream family). As a result, there were a relatively small number of the iconic aluminum Class A’s on the used market, and only a handful available to look at near Honeycutt’s California home. This was prior to the revival of interest in vintage RVs, and the few he did see were in serious disrepair. Honeycutt remembers one in particular that had been stored for years in the middle of a field, and when he pulled the dipstick, it came out covered with grit. He wisely decided to pass on that one.

It took two years before Honeycutt found his 1985 35-foot Airstream Classic 345. Unlike the others that he had seen, this Airstream was basically in sound condition, though the original owner had neglected preventive maintenance.

“I had a lot of catching up to do,” Honeycutt admits. 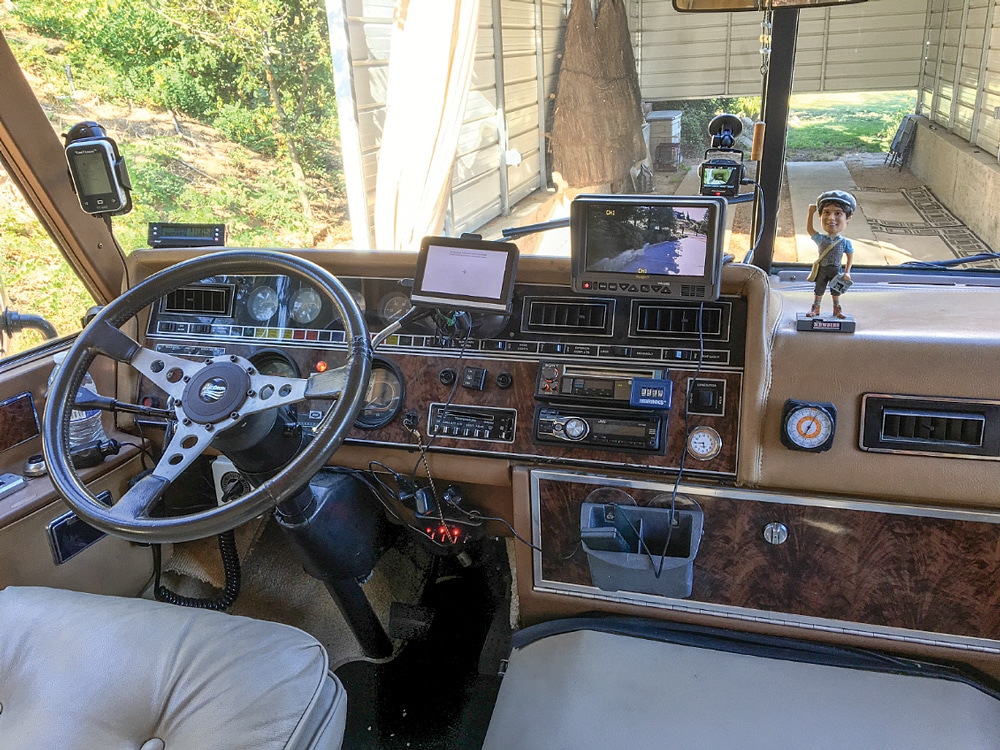 The Airstream’s dash has been updated with a GPS unit and a 7-inch color rearview monitor.

While the exterior of the motorhome polished up beautifully, elements of the interior were worn and dated. Honeycutt knew he wanted to do an all-out restoration, so he developed a list of potential projects ranging from “got-to-change” items to “upgrades.” His first step was pulling up the old carpet and replacing it with teak-like flooring. Honeycutt also stripped and refinished all of the woodwork, laying down nine coats of varnish in the process. In addition, he replaced the appliances and faucets, and switched all of the lights to LEDs.

While he was successful in doing much of the work himself, Honeycutt felt he needed the manufacturer’s expertise for some of the major changes he and Yen wanted to make. In 2008 he made the trip to the Airstream factory in Jackson Center, Ohio. He was amazed to find that three of the five technicians who worked on his upgrades were the same men who had put his motorhome together more than three decades earlier, providing a wealth of knowledge and experience. Among other upgrades, Honeycutt had the twin beds at the rear of the coach replaced with a junior queen, and also had an additional closet installed. In the bathroom, the shower floor was replaced with porcelain tile, the sink switched to stainless steel, and a sliding glass shower door was installed. The factory also replaced the aging striped patio awning and added additional awnings, all solid burgundy in color, to the rear- and streetside windows. Finally, the manual roof spot light was upgraded to remote control and the rear black-and-white camera to color/audio with a 7-inch monitor.

After returning from Ohio, the couple added left and right rearview cameras, and in 2011 they had the exterior vinyl decals replaced with paint, and the accent stripe repainted. They also added a satellite-television receiver and two flat-screen TVs.

Of all of the upgrades, Honeycutt recalls replacing the interior brushed copper hinges and handles as his least favorite.
“Eighty four handles, 168 hinges,” he says with a shake of his head. “Can you imagine how long that took?” 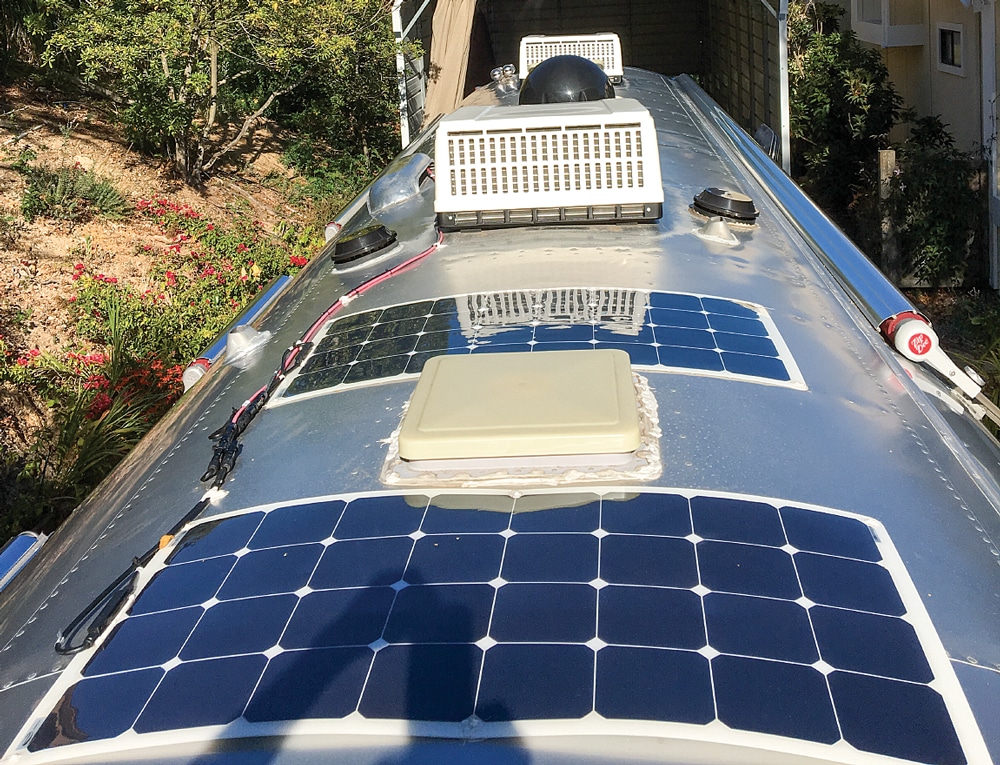 Honeycutt notes that while the motorhome had become a “show-stopper” in appearance, it had an Achilles’ heel – the original 454 Chevy engine with a three-speed transmission. Age had taken its toll, and it proved to be unreliable despite having extensive mechanical work.

“We were towed three times due to engine or transmission failure, even after repeated repairs and overhauls,” Honeycutt says.

The only real solution was to replace it. In 2014 they had a new Corvette LS3 engine with a six-speed transmission, revised drivetrain and suspension system installed, all custom-designed for their coach, and all computerized. Their first trip after that major upgrade? The Grand Canyon. According to Honeycutt, the Airstream flew up the mountains with ease, even while towing their Honda Fit.

Second to None
If you are interested in owning your own piece of history, these classic aluminum Class A Airstream motorhomes can be found for as little as $3,000, or up to $50,000 or more for a well-kept unit. As with any significantly older motorhome, condition varies widely, and a pre-buy inspection by an experienced motorhome technician is a must.

The renovation process finally came to an end last year, when the couple added dual forced-air furnaces, a Dometic climate-control system with heat strips and two 150-watt solar flex panels, and a new 600-watt inverter. Honeycutt can honestly say that the motorhome is now 99 percent reliable, from front to rear, left to right and top to bottom, and that there is nothing – absolutely nothing – he would change.

“It took 10 years, three mechanics and a darn good bank account – with a martini, once in a while. But we got ’er-done!” he laughs.

Honeycutt and Yen plan to retire at the end of the year and are looking forward to enjoying the fruits of their long, and sometimes difficult, labor. Along with their two dogs, two cats and their cockatoo, they hope to undertake an extensive trip across the United States, eventually exploring every state.

While bringing a classic ride like this one back to showroom condition is fulfilling, as Honeycutt alluded, it isn’t cheap. The initial cost of the motorhome itself was only $24,500, a small price for a well-built, 35-foot Class A. But even with Honeycutt doing much of the work himself, he estimated that they have put more than $150,000 into improvements – including $52,000 for the drivetrain replacement. However, as Honeycutt points out, the work was not done all at one time, and they were able to use the Airstream for vacations throughout the renovation process. And it would be difficult to find a new motorhome with the same quality of construction and upgrades for a final cost of less than $175,000.

Of course, they would also be missing out on the history of a true American classic ride.