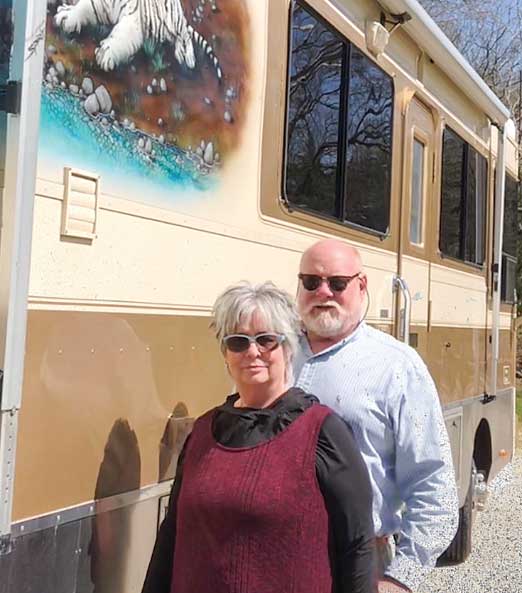 Three tiger murals, a free-flowing interior and extensive boondocking appointments make this 1991 Ivory Class A the perfect choice for the Barkers

Ken Barker still fondly remembers his introduction to Safari motorhomes. He and his wife, Billie Ann, were at a Good Sam rally with their fifth-wheel in 2001 when he saw a group of women clad almost solely in safari and lion-related gear – hats, shirts, jackets and more. With no jungle nearby and unsure of what they were celebrating, he turned to a fellow camper.

Billie Ann and Ken Barker became fans of the Safari Class A after viewing its loyal following first hand.

“What’s that all about?” Ken asked.

“Oh, that’s just a group of Safari owners. They’re crazy about their brand.”

In fact, if a brand can be judged by its avid followers, then everyone in the market for a used motorhome should be taking a look at a Safari. With one of the largest international RV clubs, Safari owners and enthusiasts form a close-knit support group that covers seven regions throughout the United States and Canada. Impressed by the quality of its coaches and the fervency of its members, the Barkers became Safari fans. So, it was only natural that the Missouri couple took a closer look when they saw a used 1991 Safari Ivory 36 at a local Ford dealership five years later. Ken was immediately sold on the Oshkosh chassis with an 8.3-liter Cummins engine and Allison transmission. And while some elements of the living space were worn or outdated, Billie Ann loved the floorplan and storage space.
“You can always redo the interior,” she observes.

Unfortunately, the initial asking price was steep, and the dealer rejected the Barkers’ much lower offer. Still, Ken sensed that the car dealer wasn’t quite sure what to do with an RV. A few weeks later the dealer called to see if Ken would meet him halfway. He refused, though he did mention that cold weather was on the way.
“I said, ‘You know, pretty soon you’re going to have to winterize,’ and I think that did it,” Ken laughs, because a few weeks later the dealership accepted Ken’s original offer of $28,000.

In 2006 the Barkers joined the ranks of proud Safari owners. The first thing they did was drive to a Freightliner Truck Center in Illinois, where Ken had the technicians “go over everything.” 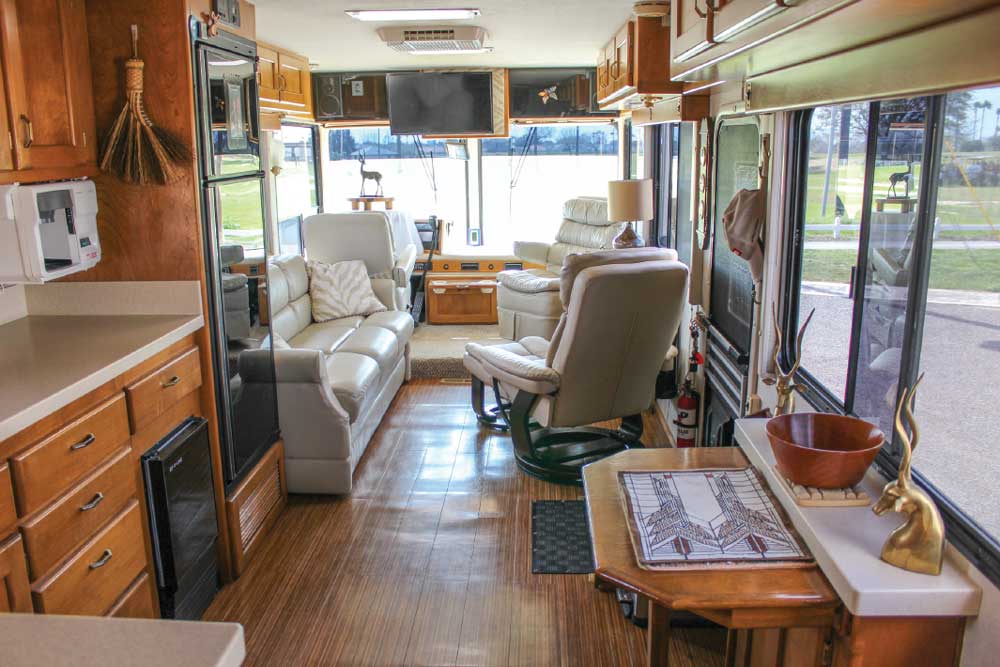 This Safari sports a new HDTV and Bose sound system. The new, white recliner and sofa, along with the reupholstered captain’s chairs, brighten the coach’s interior.

“I came away a whole bunch lighter in my pocketbook,” he says, but emphasizes that he would much rather spend money on keeping his coach maintained than on doing emergency repairs.

Once the Safari was declared mechanically sound, the Barkers turned their attention to upgrades. They added a Banks Power engine-performance package boosting the 8.3-liter 250-hp engine to 325 hp. They also had a new RV Armor roof installed.

In terms of outward appearance, their Ivory was stunning, with three Randy Nagle custom murals commissioned by the original owner. In keeping with the Safari theme, these include a white-and-black adult Bengal tiger on the right, an adult orange-striped Siberian tiger on the back and two adorable tiger cubs on the left side of the motorhome. All are captured in amazing detail. 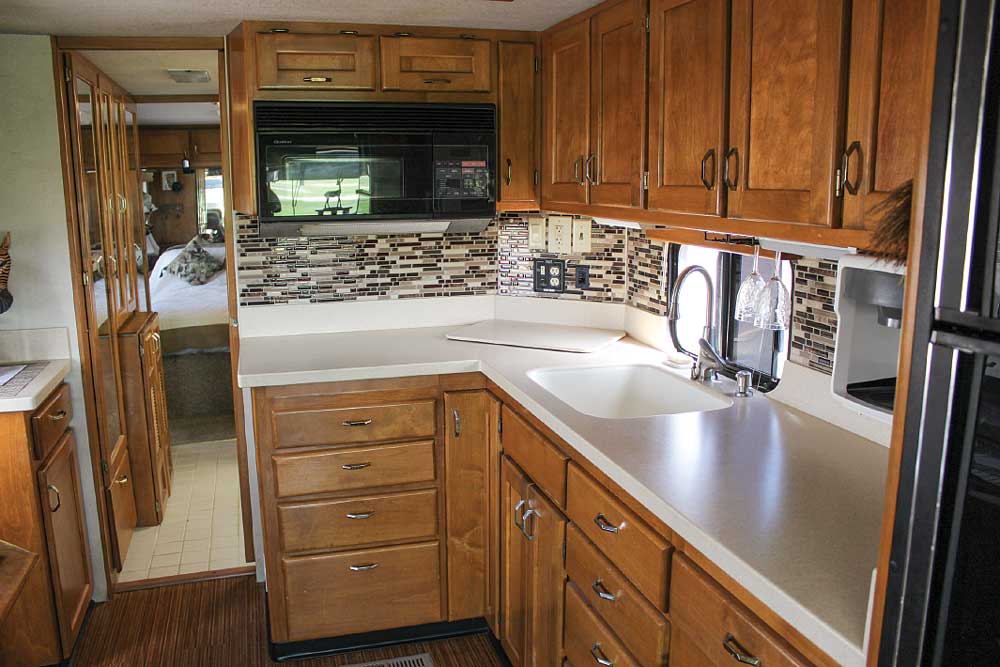 New solid-surface counters and tile backsplash, along with a laminate bamboo floor, update the Ivory’s galley.

But while the murals were in excellent condition, the pinstripes were decaying, and the front cap needed repainting. The total project, including removal of the old pinstripes and a three-coat clearcoat to preserve the murals, took about 17 days. The result is a classic coach that looks showroom-new and is likely to stay that way. When they are not traveling, the Barkers keep their Safari in an equipment barn on their farm or under the RV port at their “wintering over” spot in Mission, Texas. And when they are on the road, they are used to getting noticed.

“You’d be surprised at the number of people who come up to us at Flying J’s and ask if they can take pictures,” Billie Ann says with a smile.

As for the interior, the Barkers made changes “to fit our needs, our personalities.” Though the Ivory has no slides, it has an open, roomy feel accentuated by the couple’s addition of laminate bamboo flooring and their bright, neutral choice of color scheme. The sleek, solid alderwood cabinetry is offset by a new white leather sofa, recliner and reupholstered pilot and co-pilot captain’s chairs. In the galley, the counters have been replaced with seamless white solid-surface counter­tops and the backsplash upgraded with tile. The couple kept the original refrigerator but removed the four-burner stove (they primarily grill outside), replacing it with a portable induction cooktop. They’ve also found they seldom dine inside with guests, preferring to be outdoors, so they cut the table down to fit two comfortably, giving them more floorspace.

Wildlife murals, like these three tiger-themed masterpieces by artist Randy Nagle, are synonymous with the Safari brand.

“I love the simplicity. It’s just perfect for us,” Billie Ann says.

The Barkers’ Ivory makes optimal use of every square foot. The walk-through floorplan has a split bath with a freshly carpeted rear bedroom with a queen bed and ample closet space. Billie Ann has also kept decorating to a few select pieces that accentuate the coach’s modern look, so the long, uncluttered view from the front of the coach to the rear makes the Ivory feel much bigger than its 36 feet.

As an integral part of their optimization, the Barkers also removed the furnace, opting instead for two Olympian Wave catalytic heaters.

For entertainment, the Barkers replaced the original TVs with new HDTVs, adding a Winegard Slimline satellite system and Bose sound system. Other upgrades include engine- and refrigerator-fire suppression systems as well as an electrical surge and monitoring system for shorepower protection.

If they do spend time dry camping, the Safari is up to the task. They upgraded to a Magnum 2,000-watt pure-sine-wave inverter mated to a 600-watt, 30-amp six-panel solar array charging four Lifeline AGM batteries, providing a total of 600 amp hours of storage. In addition to their Honda 6,600-watt radiator-water-cooled generator, and the replacement of all existing lights with LEDs, these modifications make the Safari well-equipped for boondocking.

So far, the Safari Ivory has taken the Barkers from California to Florida and the Carolinas and across the central United States. They hope to include the northeast region in future trips. But for now, they are gearing up for the Safari International Club’s 30th Anniversary Rally August 27-September 1 in Shawnee, Oklahoma – and they can’t wait to bring along a copy of MotorHome magazine. The president of their club encouraged Ken and Billie Ann to contact us about their beautifully restored RV after it was featured in “Safari Trails,” the club’s news magazine, back in 2016. Of course, upgrades have continued since then, in what Ken refers to as “an ongoing labor of love,” and he credits the advice and support of the Safari community as instrumental in the renovation of this classic ride.
As Ken says proudly, “They’ve helped us ‘Keep the Lion Alive.’” 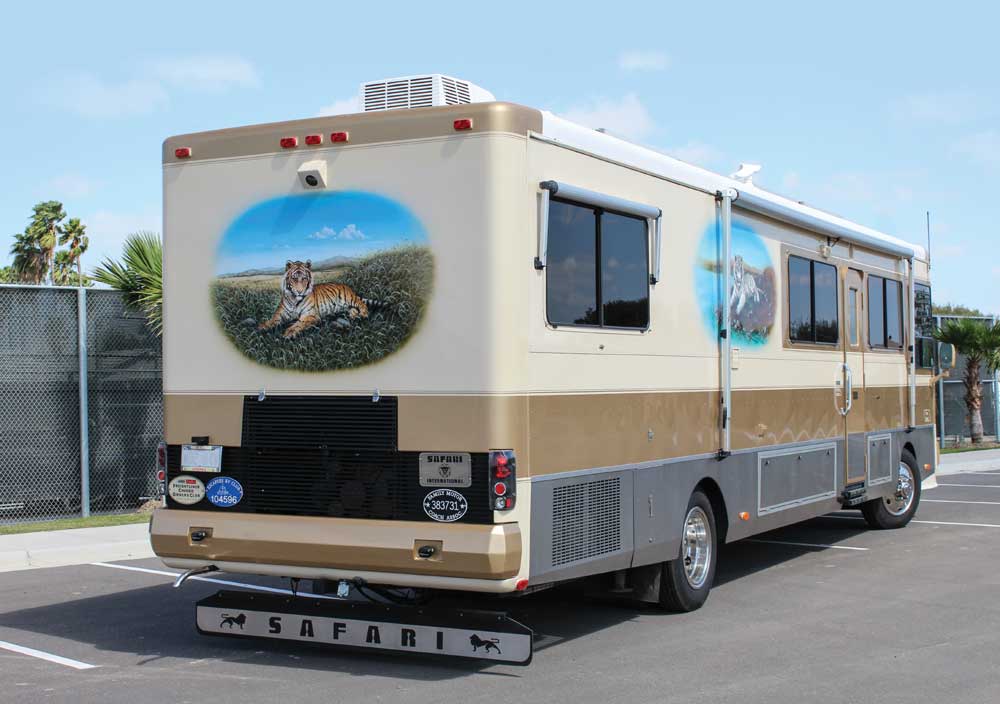 Safari Motor Coach Corp. was founded in the 1980s and produced both diesel- and gas-powered Class A motorhomes. The last Safaris were made in 2009 following a 2002 buyout by Monaco and that company’s subsequent bankruptcy. On today’s used market they sell quickly, still popular among RV enthusiasts for their quality and, of course, their iconic murals. If you can find a 1990s Safari Ivory, expect to pay between $30,000-$40,000. Comparable Safari diesels, like the Serengeti, can be found in the same price range. For larger models, like a 40-foot Continental, expect to pay an additional $10,000.