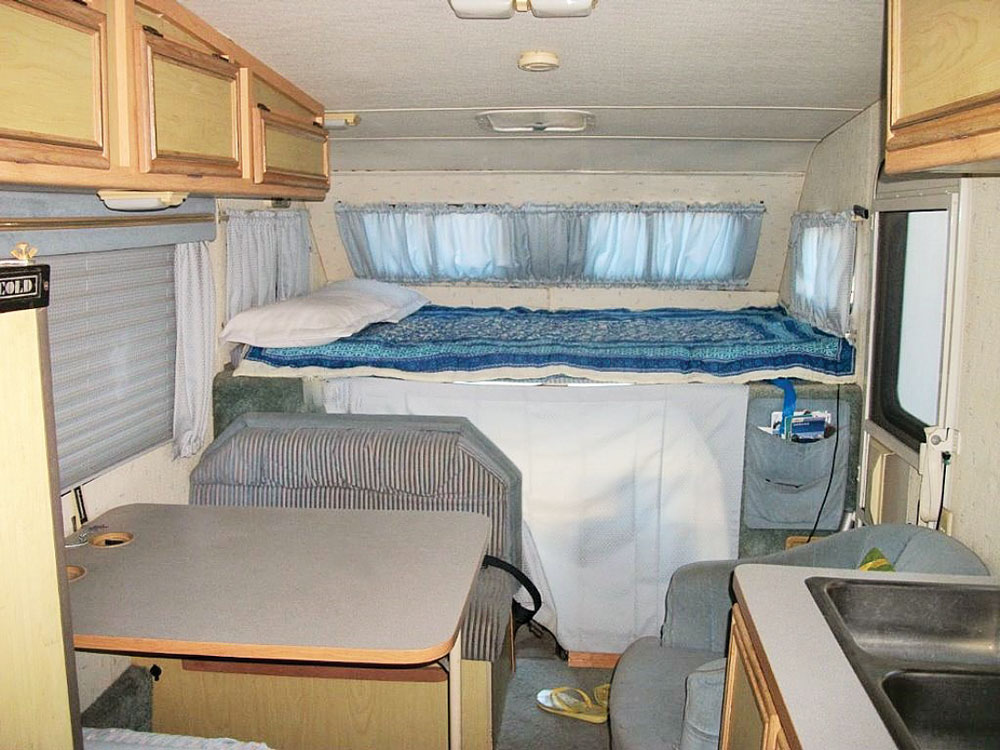 Everyone remembers their first time. Whether it was a Class A, B or C, we all think back fondly to our earliest adventures in a motorhome. For our family, like so many others, that first experience took place in a Winnebago. The company sold its first motorhome in 1966 for roughly half the price of its competitors, a strategy that quickly catapulted Winnebago to the top of the list of leading RV manufacturers. In fact, there were so many Winnebagos on the road by the early 1970s that the company’s brand name was often used as a generic term to refer to all motorhomes. If a classic ride can be determined by sheer numbers of owners introduced into the RV lifestyle, then the ubiquitous Winnebago has an unquestionable place on that list.

For Don and Claire Wilson, the Micro Warrior was not only their first motorhome – it has also been their last. They purchased the 1990 micro mini nearly 26 years ago, and after 140,000 miles, they still won’t part with it. Yet the RV lifestyle wasn’t even on their radar until the year that they bought it.

The comfortable cabover bed makes optimal use of space.

“We’d never even been in a motorhome before,” the couple admits, laughing.

Don was looking at the possibility of early retirement, and unbeknownst to Claire, had started researching RVs. When he finally broached the topic, Claire wanted to know just what they would do with a motorhome.

“He said, ‘Well, we could park on the beach in Mexico,’” Claire remembers, and she has to admit he made a pretty good case.

With romantic thoughts of Pacific sunsets in mind, they began searching for an RV. They were looking for something easy to drive that could double as a second car, and with a 20-foot-7-inch length and a width just over 7 feet, the Micro Warrior drew their attention. The diminutive Class C’s fuel efficiency was also a factor in their decision. The Warrior, built on a Toyota chassis with a standard V-6 engine and four-speed automatic transmission, averages a respectable 14 mpg and had already developed a reputation for reliability. The Wilsons were considering buying a new unit when they stumbled upon a year-old Micro Warrior parked outside an RV dealer’s lot with a for-sale sign in the window. The owner was there negotiating a trade-in for an Airstream, but Don was able to make her a better offer, picking up the nearly new motorhome with 7,000 miles on the engine for $22,000.

With a double sink and four-burner stove, the Micro Warrior’s galley is compact and usable.

“We have had wonderful luck with it,” Don says enthusiastically. “Except for regular maintenance, it has never had a problem.”

The interior of the Micro Warrior is not luxurious, but it offers all of the necessary amenities in a compact package. The cabover bunk provides a comfortable sleeping area without a loss of floor space, allowing the unit to have a roomier rear bath with a shower. Seating in the main living area is provided by a velvet-covered swivel chair and a dinette that conveniently converts into a guest bed for excursions that include grandchildren. The galley is small but functional, including a four-burner LP-gas stove, a double sink and a Norcold refrigerator/freezer. Climate control is provided by a roof air conditioner and a 12,500-Btu furnace. The light oak-look vinyl veneer cabinetry and stain-resistant pale blue carpet and upholstery are all original and have held up well to decades of wear.

While the Wilsons have been happy with most aspects of their Micro Warrior, Don’s one wish would be to increase the capacities of the fuel and the water tanks. The motorhome’s spec sheet lists the main gas tank as 17.2 gallons, which means stopping frequently to fill up on long trips. In addition, the unit’s freshwater capacity is only 18 gallons (including the water heater), and both holding tanks top out at 14 gallons each. The Wilsons do a lot of dry camping, and they know they must carefully monitor their usage before refilling with potable water and accessing a dump station. Still, they see this as a minor inconvenience, since moving such a small, self-contained unit takes relatively little effort.

The only modifications Don and Claire have made to their motorhome are the addition of reading lights and the installation of an extra 12-volt DC outlet in the dining area. While many new motorhomes come complete with multiple high-definition flat-screen TVs, media players, satellite antennas and theater-style surround-sound systems, the Wilsons have not even installed a single TV.

“We bought this motorhome to get away,” Claire says. “We read, play cards, play games and just talk.”

The Micro Warrior sports a roomy rear bath. Though the small gray- and black-water tanks fill quickly, the Wilsons can easily maneuver the diminutive motorhome to the dump station.

And get away they do. That initial promise of parking on the beach turned into a month in Mexico when Don retired. Since then, the couple has traveled extensively throughout the United States, including trips to Key West, the Grand Canyon, Glacier National Park and Jasper, and lots of visits to see their son in Texas. They’ve even been to Canada. The couple is just as fond of local camping, taking frequent two-week trips to nearby state and national parks and often heading out into the desert to enjoy the seclusion. Perhaps most impressive, they have traveled all these miles on a single initial investment made more than two decades ago. I had to ask – what advice would they give to a couple in the same situation they once were, considering the purchase of a small, affordable motorhome to pursue the RV dream?

“I’d tell them to make sure they had a good marriage,” Don jokes.

Claire agrees that the Warrior can be close quarters, especially when you factor in the Wilsons’ English springer spaniel, Danny Boy. However, while bigger and more opulent RVs have been all the rage for years, a new generation of buyers is now turning to more compact and affordable motorhomes, and Claire notes that their vintage Warrior is now garnering plenty of attention.

The Wilsons travel with their English springer spaniel, Danny Boy. The motorhome helps the family to unplug and get away.

“It’s not unusual for us to come back when we’ve parked somewhere and find a note under our windshield asking if we want to sell,” Claire says.

The answer, of course, is “No.” Like many other motorhome owners that we have met, the Wilsons have learned that the joy of camping is not about how much you take with you but about how many memories you bring back. That is why they will continue to stretch their horizons aboard their 1990 Winnebago Micro Warrior, an original classic ride.

The Toyota chassis and V-6 engine combine to give the Micro Warrior a respectable 14 mpg.

The Winnebago Warrior line included a Class A, traditional Class C and the Micro Warrior, all advertised as “a sure cure for sticker shock.” In 1990, a new Micro Warrior listed with a base price of $27,600. While these units can still be found for as little as $2,500 online, prices have increased as they have become a popular alternative for young first-time buyers and vintage-RV enthusiasts. The average selling price of a 1990 Micro Warrior today is between $4,000 and $5,000, but a low-mileage Micro Warrior in excellent condition can fetch up to $14,000.