The Classic Ride: Quite the Trek 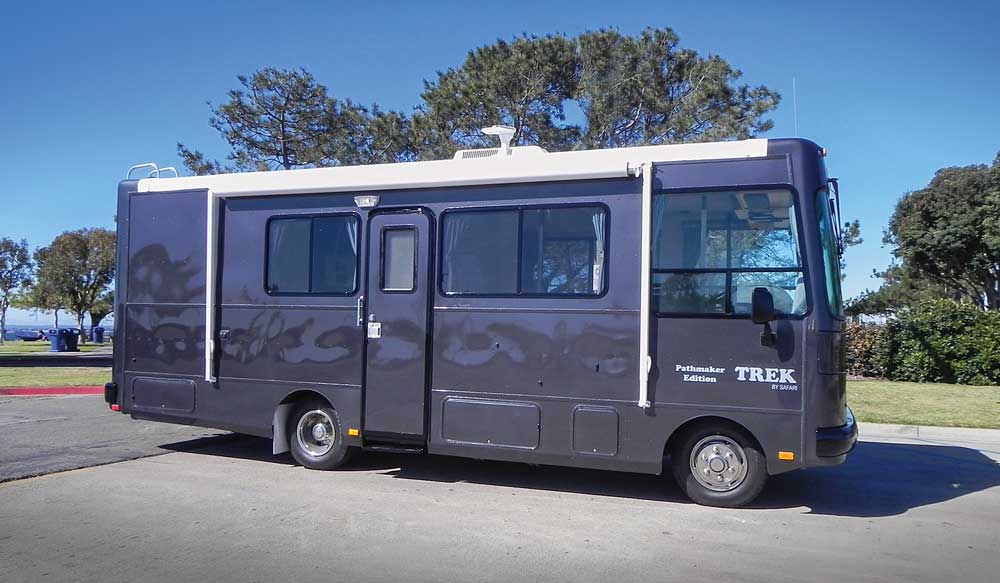 After an extensive renovation process, a couple is able to enjoy the 1993 Safari Trek Pathmaker of their dreams

Mark and Karen Souther are true “Trekkies” — not because they’re fans of Gene Roddenberry’s fictional starship, but because of their love for a 1993 Safari Trek Pathmaker. It is a relationship that has weathered a massive renovation project requiring patience, perseverance and even a few tears. If you’ve ever dreamed of breathing new life into a classic motorhome, theirs is an inspiring and cautionary tale.

The Southers have camped for as long as they can remember. As a couple, they’ve also owned their share of big RVs, most recently a 40-foot Monaco La Palma Class A motorhome. After an Alaska trip that saw them stuck in Anchorage for more than a month with a third slideout repair, the couple decided it was time to downsize.

But after several trips to dealers and RV shows, they were disappointed.

“Everything was so large,” Mark said. “We could afford to buy any coach we wanted, but none of them were what we wanted.”

Not long after, they happened upon a 24-foot Trek at a local RV park. Built in the 1990s on an Isuzu truck chassis and powered by a turbo­charged 4-cylinder diesel engine, the Safari had an unusually spacious living area thanks to its patented Electromajic bed, a queen-sized space saver that stored against the ceiling and lowered and raised with the push of a button.

“It had all the bells and whistles of a big coach, just in a smaller version,” Mark notes.
Having discovered the motorhome of their dreams, the challenge now was finding one for sale. Four-cylinder diesel Treks are a sought-after commodity, and they felt fortunate to pay just $12,000 for their 1993 Pathmaker, despite its poor condition. The Southers knew it was a good investment when they were offered $19,000 for the same Trek just two weeks later. 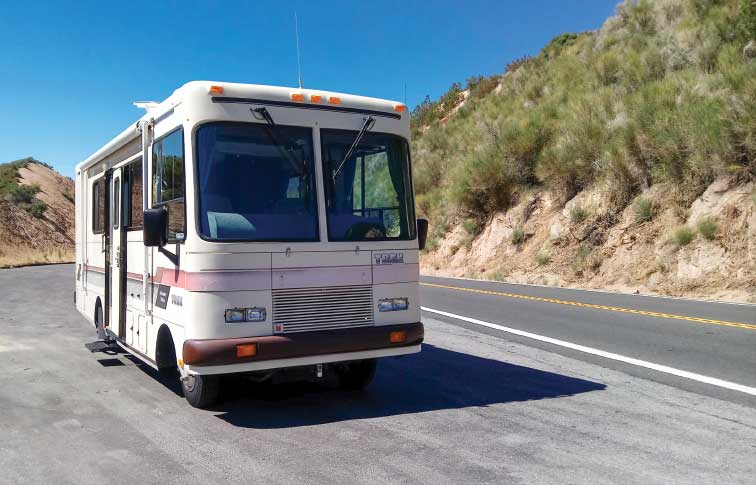 Souther Comfort: A 24-foot Safari Trek Pathmaker diesel on the used market can run anywhere from $11,000 -$30,000, depending on condition. Expect to pay a little more for the 28-foot model. The Southers estimate they spent $30,000 on renovations and new paint, far less than they would pay for a comparable new motorhome, and in return they have a pristine coach customized to fit their needs.

“We told the man it wasn’t for sale,” Mark says with a smile.

Restoration began with finding a truck repair facility willing to do the mechanical work. No Isuzu shop would touch the motorhome because of potential liability for damage to the interior, despite assurances it was going to be gutted anyway. They finally found a repair facility willing to take the job, then faced exorbitant costs, extended delays and work that was either poorly done or never completed.

The Southers ended up going back for parts to Draco Isuzu, the first shop to turn their Safari away. After hearing their story, the owner agreed to help. His mechanics had to redo much of the costly work supposedly already done by the other shop, and Mark and Karen credit Draco with saving their Trek. 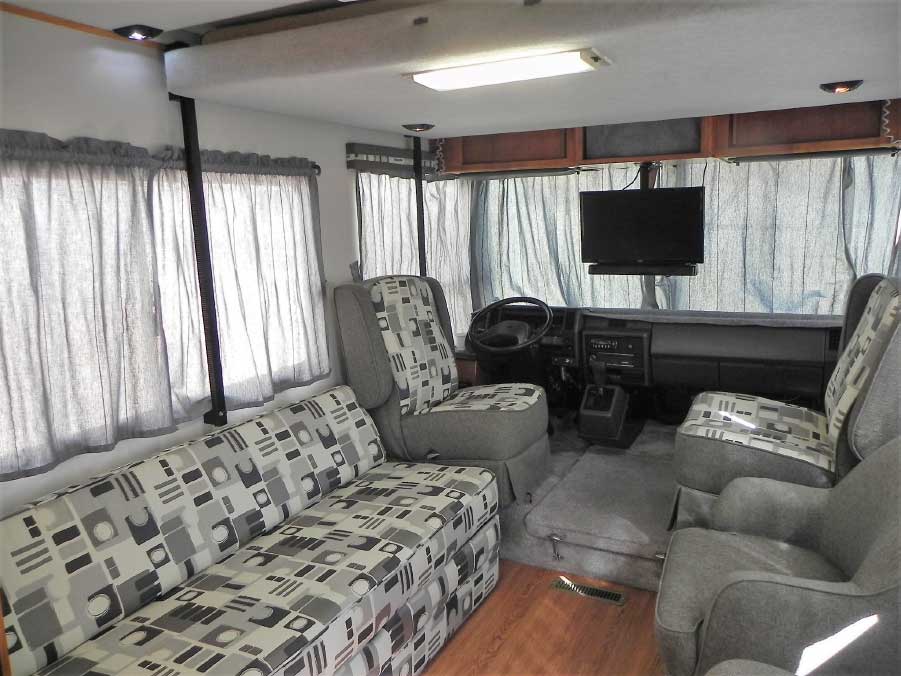 The Electromajic bed is stored in the ceiling of the living area above the sofa and chairs.

“Everything mechanically that needed attention was repaired or rebuilt. She’s like new,” Mark says.

With everything running smoothly, the Southers tackled their first major job, replacing the spongy roof — a task that included removing wet insulation, installing new wood bracing, adding metal sheathing, and caulking and sealing the seams with EternaBond tape. The obsolete shower skylight was replaced with a custom-made dome from a company in Maine. The couple also installed two new roof vents and repaired the air conditioner cover, finishing off the job with an application of Liquid Roof.

“Have you ever painted marshmallow fluff with a paint brush?” Karen jokes. “That’s what it was like.”

Confident the roof was now watertight, the Southers gutted much of the interior, stripping wallpaper with a blow dryer, repairing water-damaged walls and ceilings, and sending the furniture out for reupholstering. They installed a new headliner and used iron-on veneer to cover wall panel joints. A new Dometic toilet fit easily in the bathroom, but no replacements could be found for the odd-sized shower stall and sink, so they were refinished. New glued-down industrial-grade wood laminate flooring was installed, as well as quarter-round molding along the floor and ceiling. 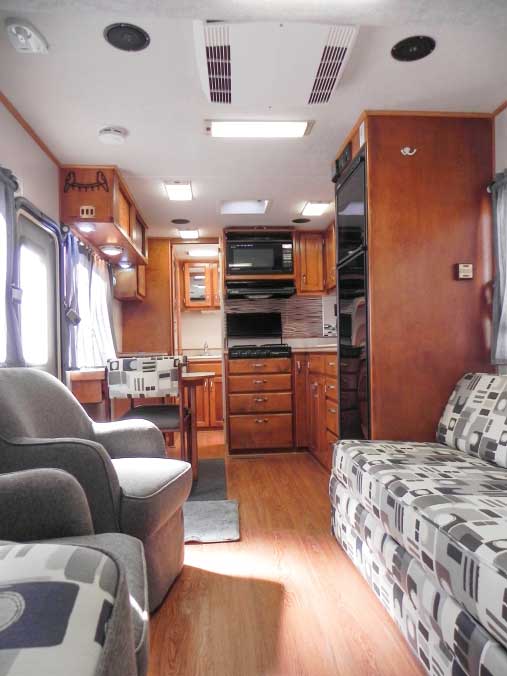 The open floorplan makes the Trek feel much bigger than its size.

In the kitchen, the Formica countertop, four-burner LP-gas stove, convection microwave and refrigerator were all in good condition. The couple added a tin-look backsplash, sanded the cabinets and applied fresh varnish, and replaced drawer pulls and hinges. Karen also made a Roman-style shade to fit the kitchen window.

The Southers removed the worn blinds and valances throughout the interior, replacing them with either tab or sliding curtains fashioned from Ikea panels. They even fashioned their own rods from dowels and doorknob pulls.

Clearing space around the windows “opened up the living space so much more,” Karen notes.

Other changes included removing the old tube-type TV up front, reconfiguring the cabinets and installing a flat-screen TV on a folding ceiling-mount. They also replaced all the lights on board with LEDs — and they’re fairly certain that’s not everything.

Karen laughs, “There are so many things we’ve done to her, we can’t keep track of them all!”

Having completed most of this major renovation themselves, they decided their “little girl” needed one refit they couldn’t do — exterior paint. They chose a shop that “seemed” to be the perfect fit, experienced with trucks and trailers and equipped with a huge bay, only later realizing the staff had never actually painted a motorhome. The Southers dropped their Trek off on August 28, 2017, with the promise she’d be done in a month. 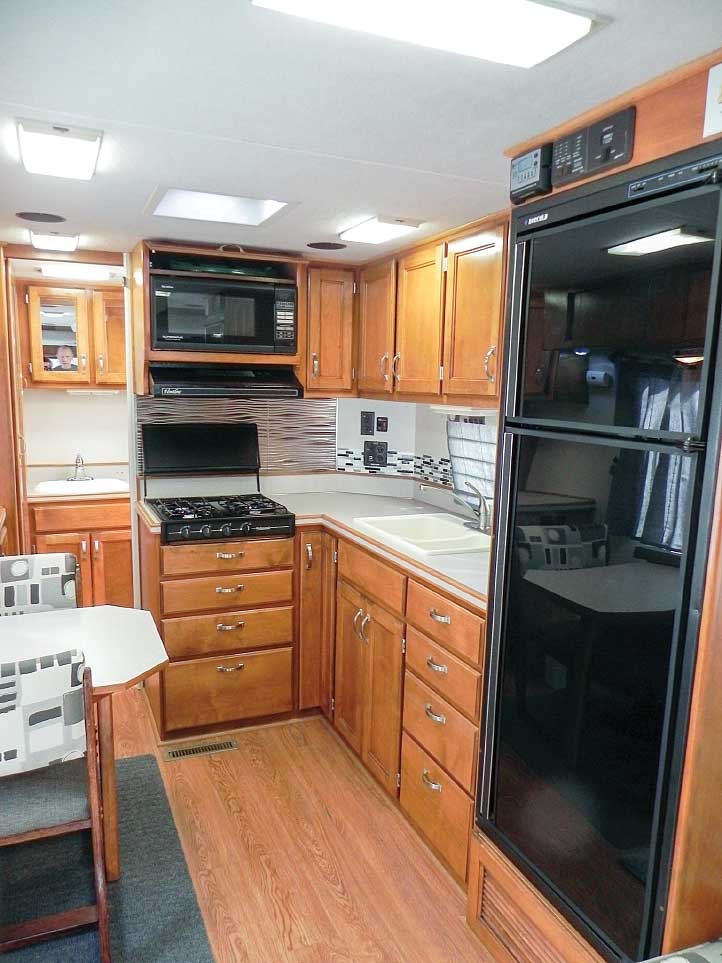 The Trek’s galley is unusually spacious for a small motorhome, complete with a 6-foot-long countertop.

Time dragged on until finally, in November, the shop called to say the Trek was prepped to paint. The Southers went to check it out and found that none of the caulking had been removed — a necessary part of the prep. Remedying that took another month, and it was nearly Christmas when the Southers’ Pathmaker was painted. Their first view of the finished product was disheartening: paint missing where tape had been pulled from around the windows and locks over sprayed, making keys useless. In addition, the front windshield couldn’t be reinstalled because the shop lost the gaskets.

Karen and Mark were able to track down new gaskets, but then the shop broke the driver’s-side window during installation, causing further delays. After the Southers brought their motorhome home, they found additional problems. A rear bumper had been painted but never repaired. Hardware had been lost and replaced with rusty, poorly fitting substitutes. On one compartment latch, long bolts were substituted for rivets; when these kept the compartment door from shutting, the workers drilled four holes to make room rather than find fasteners that would fit!

In April 2018, after numerous return trips to the paint shop, the Southers thought all issues had been resolved. However, on their first road trip they found that their two new Velvac side mirrors, the last available anywhere, had been broken and stuffed with paper to “fix” them. In addition, the shop had attempted to remove overspray from the backup camera’s plexiglass lens with a solvent, ruining visibility. 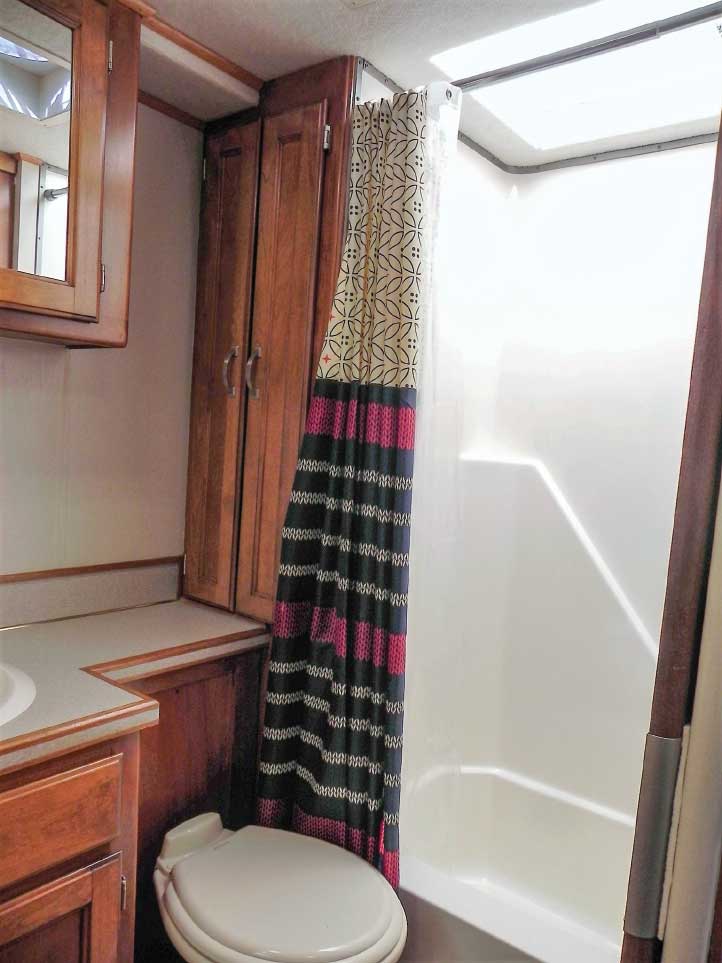 The rear bath has a new skylight and toilet, along with a refinished shower and sink.

It was, all in all, a heartbreaking experience, one they hope no other motorhome owner has to repeat. They stress that you should research a paint shop thoroughly, and ask for references, before you sign a contract.

“When you take your beauty to the beauty parlor, make sure you have done your homework,” Karen said.

The painting experience aside, these Trekkies have no regrets about the time and effort spent on their Pathmaker. They recently drove her from the West Coast to their new home in Maine, accompanied by their five rescue cats. Mark was confident about traveling across the country in a decades-old RV; after all the work they have done, he says he and Karen “know that coach inside and out.”

Their hard work has drawn accolades from RV enthusiasts.

“Every place we stop, people want to know about our Safari. They come inside and say ‘Wow’,” Karen says proudly. “I guess we did it right.”

Doing it right — the definition of a true classic ride.