The Classic Ride: Peace, Love and a VW Bus 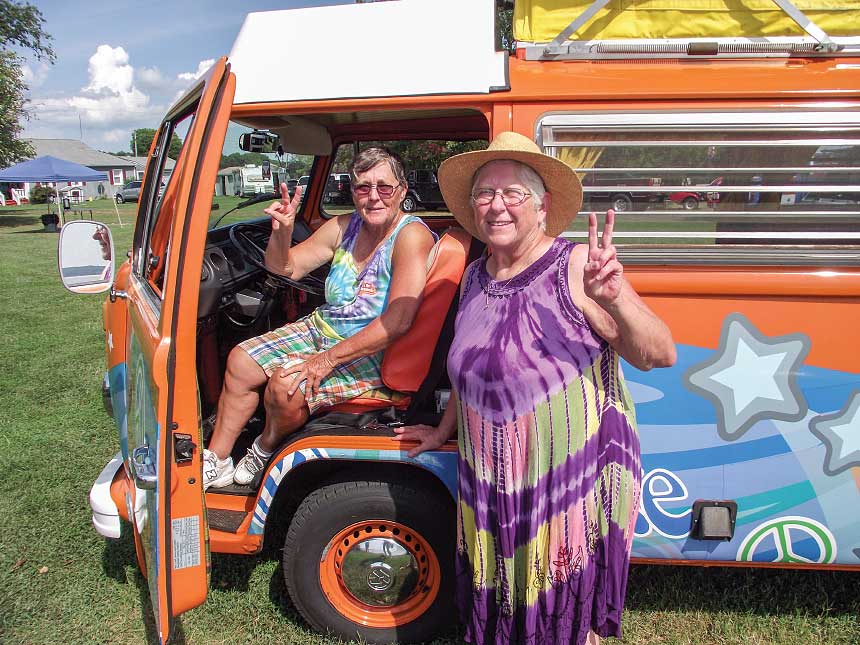 We are surrounded by men and women in tie-dyed shirts, listening to a band on a hot August day. Beside us, a camper van proclaims the words “peace” and “love” in Peter Max-like technicolor. It could be Woodstock, but this isn’t Max Yasgur’s dairy farm in New York. We are on the banks of Virginia’s Rappahannock River at an informal VW rally, celebrating the iconic “hippie bus” that became a symbol of youth culture in the 1960s.

The rally is the brainchild of D.K. Wills and Brenda Early, who have sponsored this low-key event every summer for eight years. Like everyone else here camping along the river, the partners are VW enthusiasts, but they’re also the proud owners of a barn full of Volkswagens they “tinker with,” including a 1969 tour bus and a ’74 Thing.

“I’ve always loved them,” Early explains. “When I was a kid, I really liked the rounded fenders of cars from the 1940s, but by the time I got my license, they had disappeared. The only car left with that style was the Beetle.”

She drove a long list of VWs over the years, everything from a ’73 bus to a VW convertible. Wills shares her affection for vintage vehicles, which led to their acquisition of the van they call the “Peace Bus.”

“We go to a lot of rallies, and we wanted something we could stay in. We had started looking, and someone called us from a show to say there was a cool bus there for sale. But it was just too far to go,” Wills says.

Coincidentally, the van was bought by a VW dealership in Staunton, close to the partners’ home in the Shenandoah Valley. The dealer did a partial glossy vinyl wrap on the van to echo the art and graffiti of the 1960s, using it as an eye-catching promotional car. And when the Peace Bus had mechanical issues, the staff sought the advice of the local vintage VW expert — Brenda Early.

“They would come pick Brenda up and drive her down there so she could advise them about what they needed to fix,” Wills laughs.

Eventually the dealership changed hands, and the new owner decided he wanted a more modern mascot. Wills heard the Peace Bus might be for sale, and she jumped on it.
“I told him what I was willing to pay, and I put my name on a piece of paper. The next day he called me and said, ‘Come and get it.’” 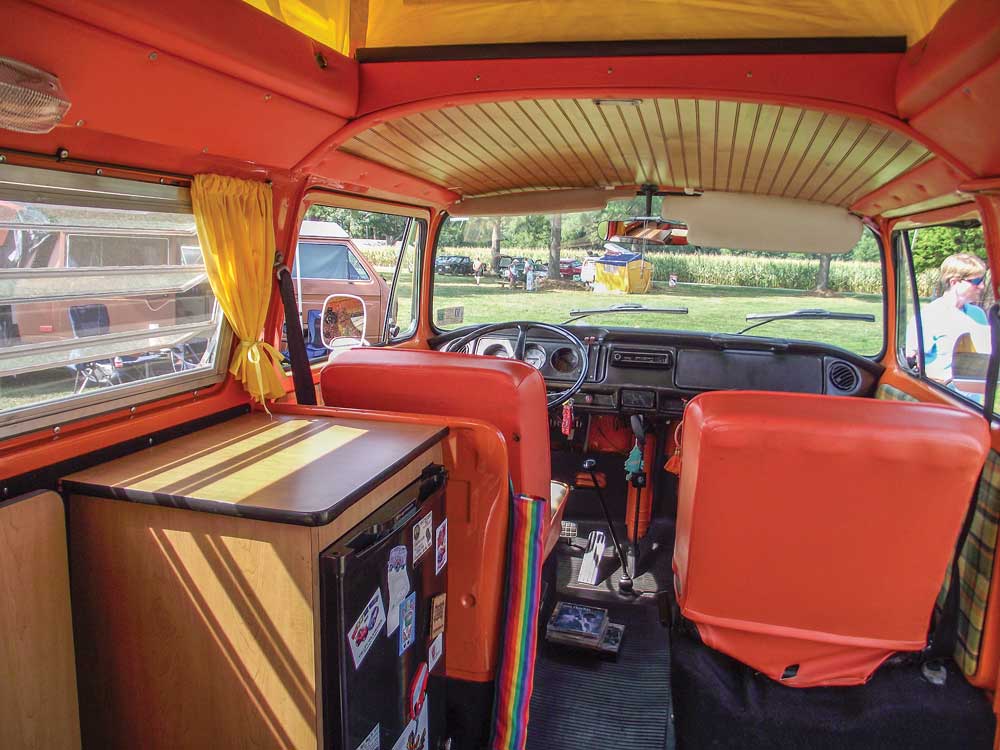 This vintage VW is equipped with a refrigerator and foldout dining table.

While it was actually produced a few years after the iconic 1969 music festival, the renovated 1973 Volkswagen Riviera camper van has the same look as its Woodstock-era predecessors. These VW campers grew from a sketch done in 1947 by Ben Pon, a Dutch businessman, after touring a Volkswagen factory in Germany. There he saw trolleys made from stripped down Beetle chassis being used to transport parts. The first VW Transporter rolled off the production line nearly three years later. The rear engine and open box design made it the perfect shell for myriad uses, and in the first five years Volkswagen turned out 90 different body combinations, from buses to pickups to beer wagons.

In 1951 VW licensed Westfalia to do its camper conversions, and the forerunner to today’s Class B motorhomes was born. Over the next decade, the popular bus evolved to include a folding rear bed, permanently installed kitchen unit, cabinets, water tank, curtains and an optional striped awning. As the camper’s popularity grew, companies in the United Kingdom and United States began producing their own van conversions. The Peace Bus was originally converted by Automotive Services Inc. (ASI) in conjunction with Riviera. They purchased the shells and had tops made by Campmobile. These popped straight up, as opposed to the slanted tent-like top of the Westfalias. While these early RVs did not include the many amenities of modern motorhomes, they did allow travelers to “carry their homes on their backs” affordably, becoming a physical representation of the younger generation’s rejection of material possessions and their embrace of a new, freewheeling lifestyle. 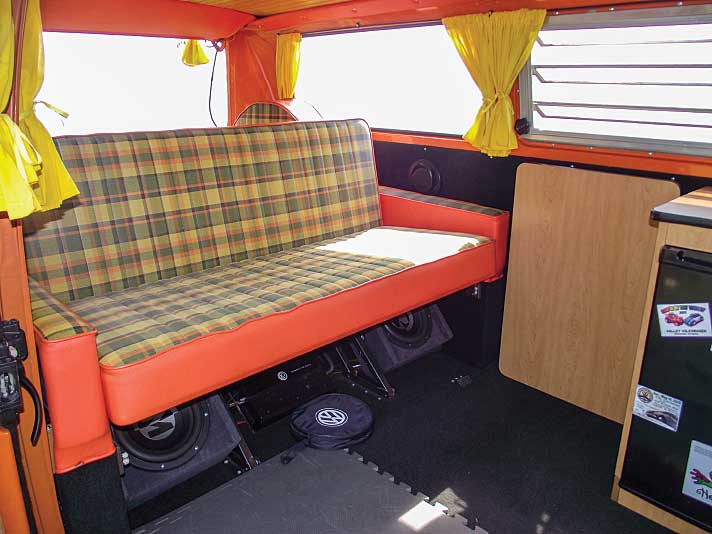 The bench seat folds into a bed for two.

The Peace Bus captures this era inside and out. Professionally remodeled prior to its purchase by the dealership, the upholstery and the fabric portion of the hard pop-top had been redone using bright colors and a plaid pattern reminiscent of the Sixties. The ceiling was fitted with light woodgrain panels to complete the look. The bench back seat converts to a full bed and sleeping for two additional adults when the top is popped up. A fold-down table provides an eating area, and the van also includes a small refrigerator. The VW is powered by an air-cooled 2.0-liter engine, which Wills and Early had rebuilt, and it is fitted with a three-rib (bell housing) transmission. It is a reliable vehicle, one Early says they would “take anywhere.”

In addition to attending rallies in the Peace Bus, Wills and Early also own a more modern RV to use for recreational camping. It is a Volkswagen, of course — a 1989 Vanagon — fully equipped with a stove and refrigerator, water and propane tank, and a portable chemical toilet — that they purchased seven years ago. Today it is parked beside the Peace Bus, another of the many diverse VW vans to attend this Woodstock-themed event. Participants have come from VW clubs across Virginia, and they form a close-knit community, always eager to share their knowledge and experience, as well as their fondness for all things Volkswagen. 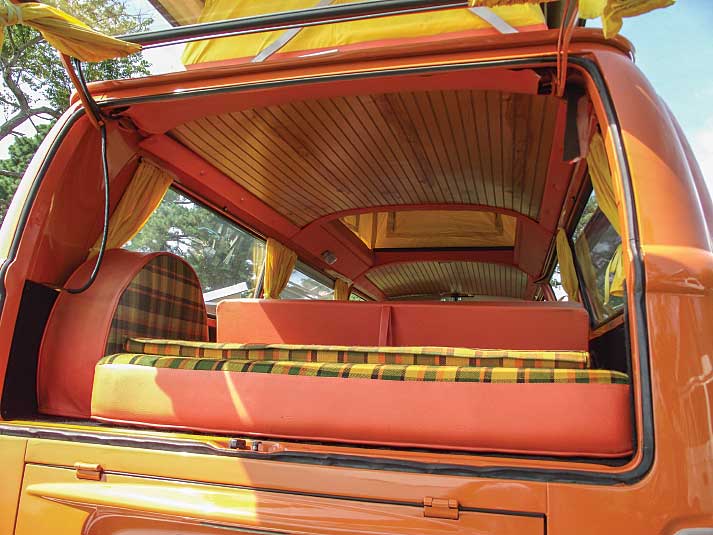 “Do you know how long I’ve been into VWs?” Jeff Hoaglin, a Westfalia owner laughs. “I bought a ’63 Herbie Love Bug for our first anniversary. That’s supposed to be the year you give paper, so I gave her the title!”

But it isn’t just affection for a brand that draws these folks together. There is something of the spirit of Woodstock here, a desire for a kinder and simpler existence. It is what drew eventgoers Noelle Eastwood and her husband to buy a vintage camper and bring their 3-year-old daughter. It is what makes people smile and wave whenever they see the Peace Bus. It is why Early is smiling now as she leans against her camper.

“I guess I’m just an old hippie at heart.”

The Westfalia Vanagon has a slanted screened pop-top that sleeps two adults. Wide windows lend an open feel, and there’s a full kitchen inside.

As everyone, young and old, claps and sings to the music, the Peace Bus looks on — the symbol of an era, and a MotorHome classic ride.

Prices for VW campers manufactured in the 1960s and ’70s depend on the level and type of restoration. Fully renovated custom units can go for $50,000-$60,000 or more, and often include features (like showers, microwaves and TVs) not found in the originals. A partial restoration runs between $12,000-$30,000, and a true project VW (needing body, interior and engine work) can be found for around $4,000. For a newer model, like the 1989 Westfalia Vanagon seen here, prices range between $18,000-$29,000 depending on condition and mileage.

Ann Eichenmuller is a Virginia writer who loves traveling with husband, Eric, in their Minnie Winnie. Ann is the author of four books, including her recent mystery, The Lies We Are.