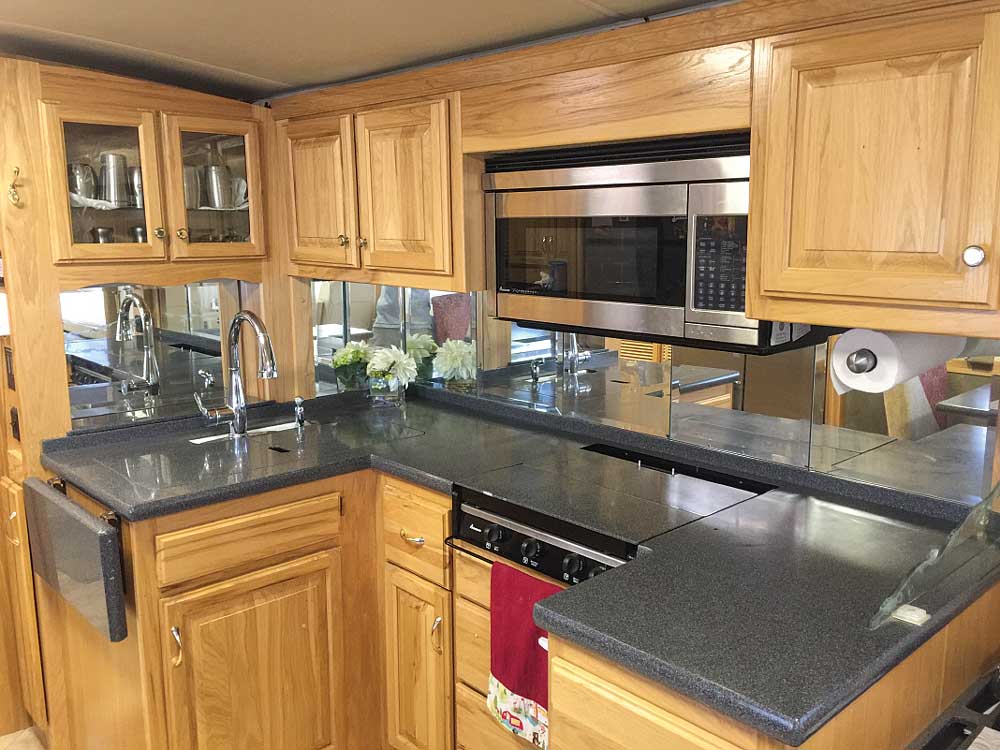 Buying a used motorhome is a little like online dating – you see a photo, send some emails, maybe chat on the phone, and then drive or fly to meet the person you hope will be “the one.” Unfortunately, for many potential RV buyers, that stunning picture from the ad turns out to be a decade-old and “lightly used” motorhome that has been sitting derelict for years. If you have the time and skills, as many of our readers have demonstrated, it is possible to bring a dead or dying coach back to life. But most of us don’t get into the RV lifestyle to spend the first year in the driveway tearing out soft floors or replacing a roof. We want to be out on the road, preferably right after we sign the check. As Dave Pass will tell you, such a fairy-tale ending is possible, if you pay attention to two words.

“Maintenance records,” he says emphatically. “They are the key to everything.”

Dave, and wife, Lynn, had owned three Airstream travel trailers, but in 2013 they decided they wanted to make the move to a Class A motorhome. They were looking for more space and comfort while driving, and the convenience of being able to move around while on the road. As active members of the Airstream owners’ club, and frequent participants in rallies and caravans, they didn’t want to lose that social connection, but they also weren’t interested in a vintage Airstream renovation. They wanted an Airstream coach that was less than 15 years old, and since the company produced fiberglass motorhomes beginning in the 1990s through 2006, that narrowed their search.

Solid hickory cabinets and woodwork throughout are a hallmark of this Airstream’s quality construction.

At the time, there weren’t a lot of larger Airstreams on the market, and the couple started to think they might have to go with another manufacturer. Then they were given a lead by a couple they met on a caravan trip to New Mexico who knew someone in Wisconsin who might be thinking of selling. They immediately contacted the owner and, after a few conversations, they booked a flight to look at the 2005 396XL Land Yacht. Two days later, they were driving it to their home in Portland, Oregon, and they have been camping in the Airstream at least 150 nights a year ever since, all without any problems.

What made the Passes’ experience so much more positive than most of the buyers we’ve met? While they agree that their coach’s quality construction is certainly a factor, they largely give credit to the Airstream’s previous owner. The motorhome’s Caterpillar 330 diesel engine and Freightliner chassis had been meticulously maintained. A professional truck driver, the owner had consistently changed the oil and fluids nearly twice as often as the owner’s manual recommended.

“He said, ‘Fluids are cheap, rebuilding is expensive,’ and I’ve followed his advice,” Dave explains. 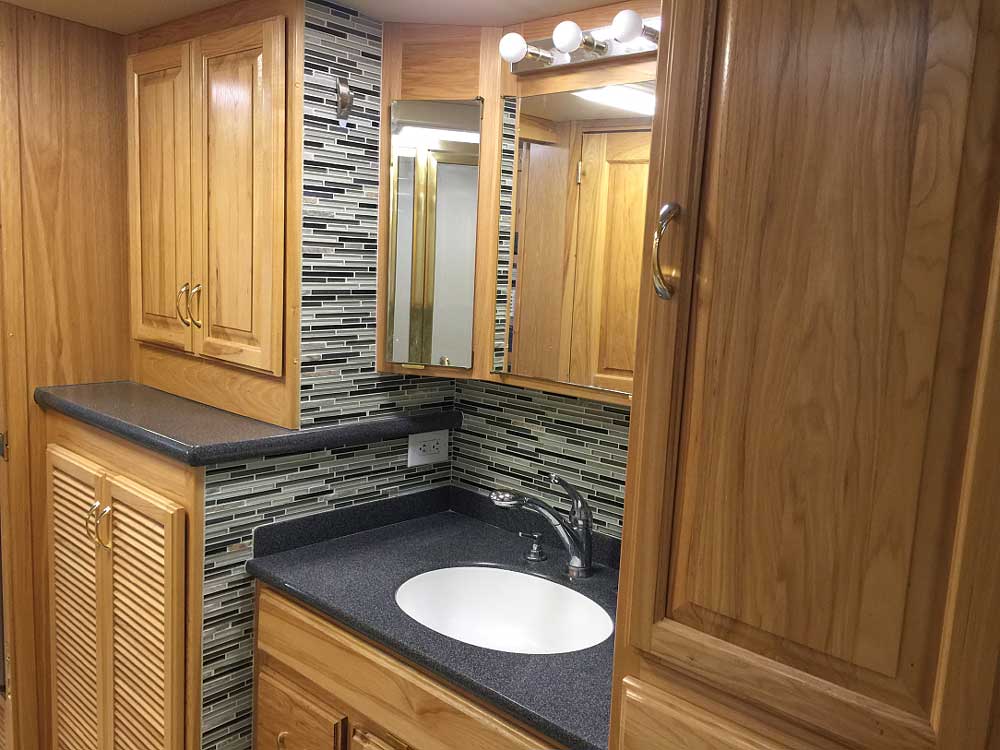 New tile updates the pass-through portion of the bathroom.

The seller’s commitment to the motorhome did not end there. When Dave and Lynn decided to buy the coach, the owner let them stay for two nights in his driveway as they became acquainted with all of the systems so that he would be available to help with any questions or problems. He even took Dave out for a driving lesson, since this was the couple’s first Class A. By literally going the extra mile, the Airstream’s seller provided something seldom included in a used RV purchase – peace of mind.

Despite being 13 years old, the 396XL Land Yacht has all of the amenities one would expect in a luxury motorhome. Two furnaces, two rooftop air conditioners with heat strips, and an 8-kW Onan generator make the Airstream well equipped for all-season camping. The large slideout expands the kitchen and the seating area, and there is a slideout for extra space in the bedroom as well. One feature the couple appreciated was that, unlike many modern coaches, the layout still provides plenty of room even when the slideouts are not extended, providing ease of movement while underway. They also point to the high-end cabinetry and woodwork as a factor in their decision to buy. Everything is solid hickory, including the bedroom door. They say this is just one example of the unit’s overall quality construction.

“We don’t worry about it falling apart going down the road,” Dave laughs.

Artist/owner Lynn Pass painted this original mural to personalize and add a sense of space to the small split bath.

While the Airstream was in turn-key condition, the couple has made some modifications in the five years they have owned it. The two interior TVs were replaced with new flat screens, and the stereo was upgraded to double as an entertainment sound system. Space already existed for an outdoor TV, so they had an Airstream dealer install one. They changed out the faucets in the kitchen and bath, upgraded from two 4D to two 8D batteries, and added an additional 160-watt solar panel to the 50-watt panel that came with the unit. On the motorhome’s exterior, Dave changed out the headlamps for better nighttime visibility, and they replaced the fabric on the two slideout awnings. They also added an awning over the bathroom window to keep it cooler on hot days.

The most creative modifications were in the split bath. The couple tiled the open vanity area, but they also wanted to improve the appearance of the enclosed bathroom. Lynn, an artist whose work has even graced the White House in the form of an original Christmas ornament, painted a bright and inviting mural that makes the Airstream’s smallest space also its most visually interesting.

They are now considering replacing the dark Corian kitchen counter with a lighter granite or quartz, and they plan to replace the large outdoor awning this spring. Otherwise, Dave says, there is not much else they would change about their Airstream.

“We love it. It is just so comfortable!” Lynn agrees.

Dave does have some advice for anyone in the market for a used motorhome.

“Don’t be afraid of mileage, especially in a diesel,” he recommends.

He points out that his own engine is under warranty for 300,000 miles. While it had only 62,005 miles on the odometer when they purchased it, he says they have put on 30,000 more. Many people express concern when they see mileage approaching 100,000, but for a well-maintained diesel, that is barely broken in. He also cautions buyers to look at the date stamp on tires when purchasing a used RV.

“Our expense to replace all our tires comes to about $3,000,” Dave says, pointing out that this a significant amount of money and should be factored into the purchase price depending on the tires’ age.

Dave and Lynn Pass have enjoyed five trouble-free years and more than 30,000 miles in their used Airstream.

His last bit of advice?

“You’ll never be unhappy with a larger engine.”

In fact, that is the only major feature about the 396XL he would consider changing. While the 330 engine is adequate, the couple does a lot of mountain travel while towing, and he says a bit more power might be nice. Still, Dave and Lynn would not consider parting with their Airstream, which they have nicknamed “Alley Cat” in honor of its diesel engine. It has taken them down the West Coast and all across the Southwest, and they are currently planning a trip to Canada. Their experience proves that buying an older coach does not necessarily mean spending months in renovation. It all starts with choosing the right motorhome, and that’s why the Airstream 396XL Land Yacht is the Passes’ classic ride. 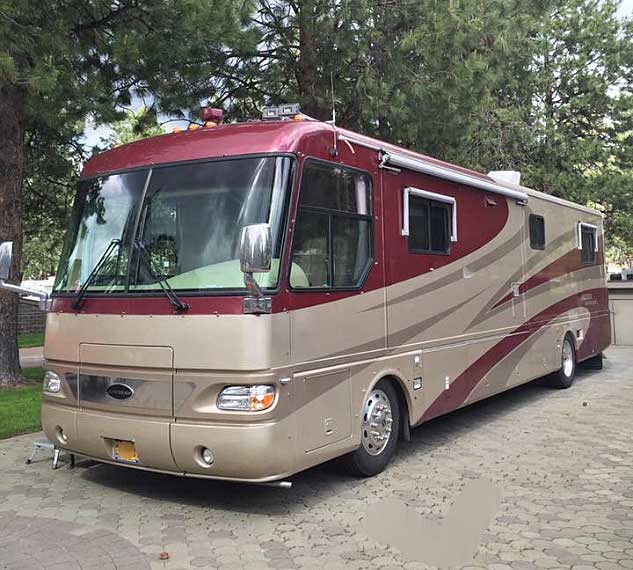 We’re on the lookout for classic rides! If you, or someone you know, has a terrific older motorhome, send an email with info and a photo to Ann Eichenmuller and your RV might be featured in MotorHome magazine!