The Classic Ride: Life Lessons in a 1990 Newell Coach 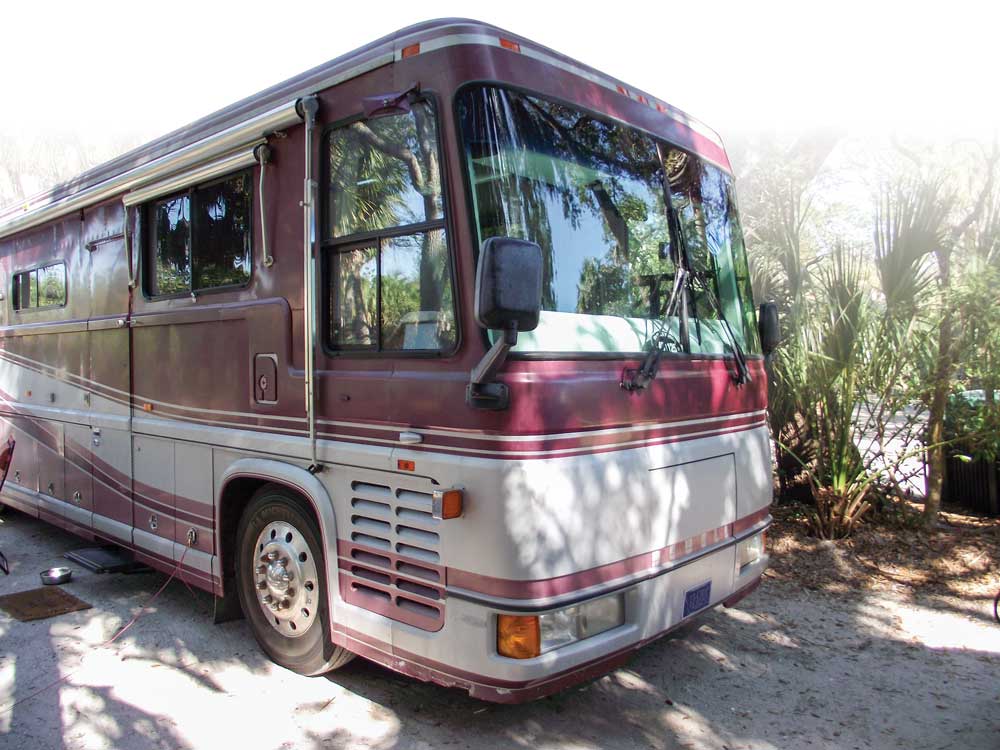 Laura Jenkins can remember the exact moment she decided to retire and buy a motorhome.

It was snowing and sleeting, and the math teacher’s northern Virginia school district had elected to open on time. She was inching along in treacherous conditions when she lost control of her car and skidded off the highway.

That was more than three years ago and a thousand miles from where we are sitting, nestled between palm trees in Florida’s Fort De Soto Park and admiring the Jenkinses’ classic 1990 Newell motorhome. Laura’s plan included taking early retirement, selling the couple’s suburban house and splitting their time between their Smith Mountain Lake, Virginia, vacation home and warmer climates in a yet-to-be-purchased RV. Ted wasn’t so sure. He loved his job as a correctional officer, and he wasn’t quite sold on the concept of retirement, but Laura’s perseverance won out. Nine months later, they purchased their first motorhome.

The Jenkinses found this 38-foot Newell coach in Oklahoma.

Choosing the right motorhome to be used as a second home is a very personal decision. For the Jenkinses, safety and durability were at the top of their list, leading them to look at older bus-style motorhomes by manufacturers like Blue Bird, Prevost and Newell. All three produced custom diesel pushers with heavy-duty steel and aluminum construction, air-ride suspensions and a reputation for quality. They soon found that even a used Prevost was more than they wanted to budget, and that Blue Birds were becoming popular with collectors, making them hard to find.

They concentrated their efforts on locating a used Newell in good condition, and after six months of online research and hours spent on the Newell Gurus website (www.newellgurus.com), they found a listing for a 38-foot coach in Oklahoma that seemed to fit their needs. They drove out to take a look and were impressed with the unit’s overall condition, inside and out. And despite the fact that the coach had been through four owners, it came with complete service records and manuals – three binders full.

“We have paperwork on everything that has ever been done,” Ted says. “If they got a new light bulb, it’s in there.” 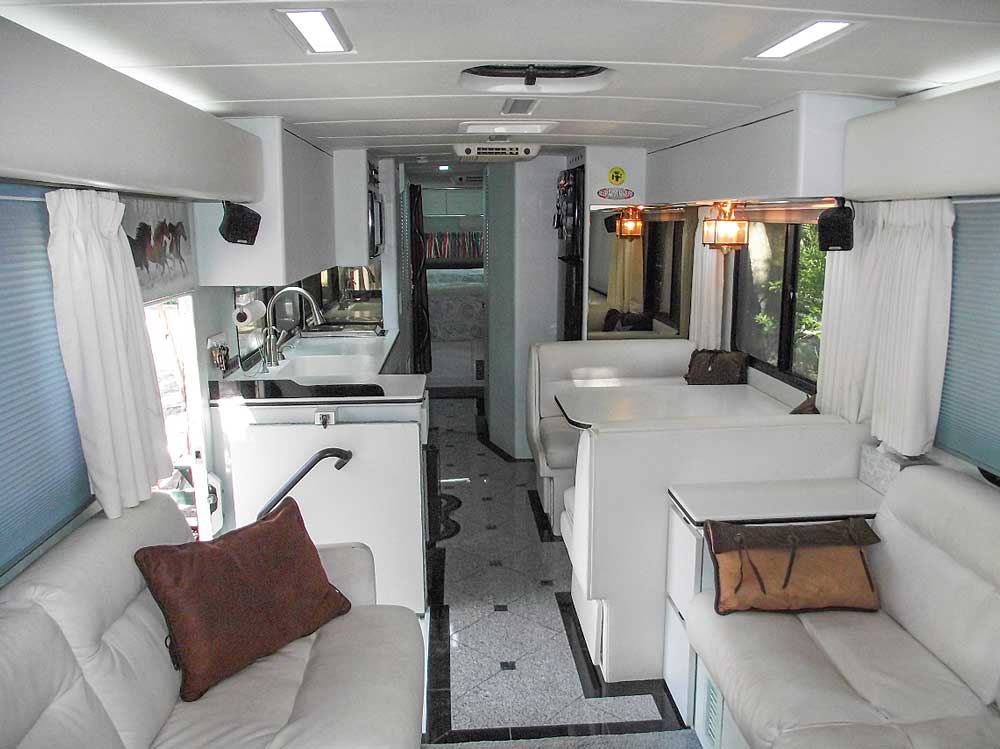 Flooring in the Newell was updated with elegant custom granite tile flooring in the galley, hallway and bathroom. Solid-surface countertops and updated hardware enhance the look.

They were also thrilled to find that one of the previous owners was actually Tom McCloud, the founder of the Newell Gurus website. McCloud and his wife had completed an interior renovation years before, which was now one of the coach’s main selling points. Despite being 25 years old, the living quarters of the 1990 Newell looked showroom new. The white cabinetry and ultraleather upholstery gave the motorhome 21st century appeal, accentuated by new carpet, window treatments, and beautiful custom granite tile flooring in the galley, hallway and bathroom. Solid-surface countertops and new plumbing and light fixtures enhanced the updated look. Appliances included a residential apartment-sized Whirlpool refrigerator, two-burner gas stove and microwave convection oven, all in excellent condition. And, of course, there was the shower – roomy, with a stainless floor and glass door, it is one of Laura’s favorite amenities.

The exterior of the coach had been well-maintained, and the couple liked the maroon-and-silver full-body paint scheme. They were also impressed with the ample basement storage. While the Newell had high miles – with an odometer reading of 169,000 – it is pushed by a Detroit Diesel Silver 8V92, an engine known for its power and longevity. In fact, there were just a few negatives; the coach needed a new air conditioner and generator, and the tires were due for replacement. Still, with a $32,000 price tag, the decision to buy was an easy one. The harder part, according to Ted, was learning to drive the coach on the way home to Virginia. 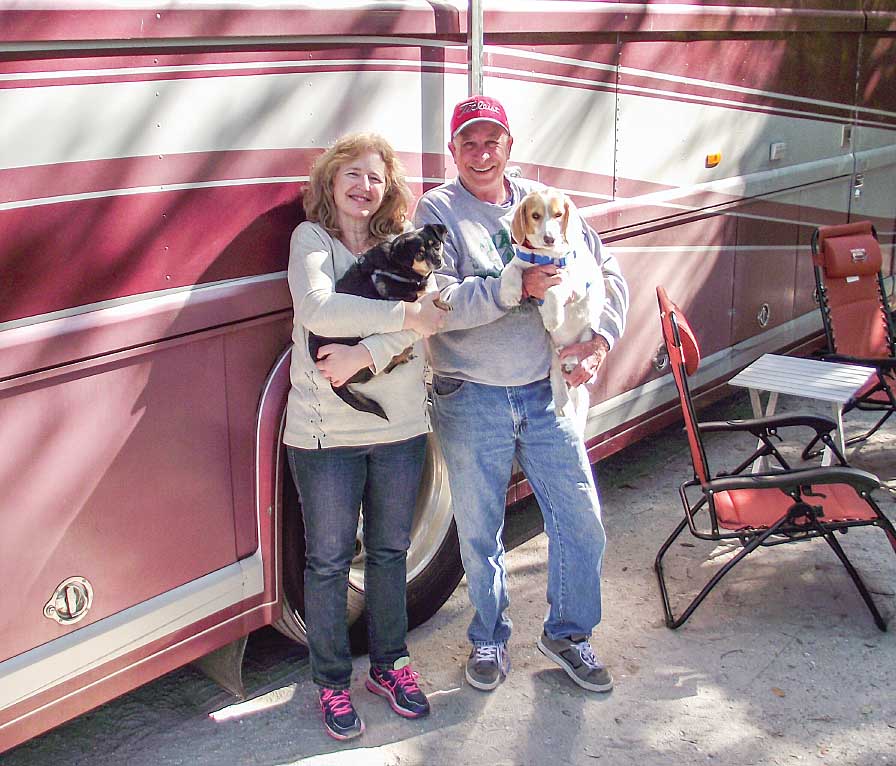 Ted and Laura Jenkins enjoy the relaxed pace of the RV lifestyle with their two canine traveling companions.

“I almost took it off a cliff,” he says ruefully.

It turns out that quirky handling wasn’t a result of Ted’s inexperience but of an error in repairs done on the unit’s air-suspension system. It’s something they might not have discovered if they hadn’t decided about two years into their ownership to take the motorhome back to Newell Coach for a complete checkup. The couple determined that, given the age of their coach, they needed the advice of experts to insure optimal performance and longevity. 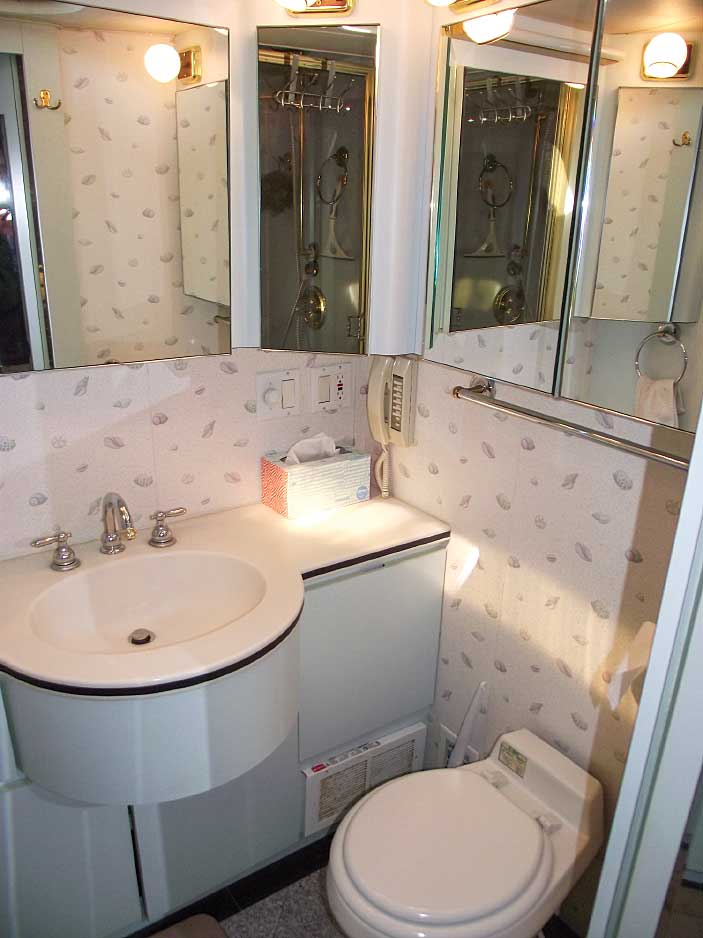 The curved vanity and mirrored cabinets help open up space in the bathroom.

“We asked them to go through it top to bottom, and fix anything they found,” Ted explains.
Thanks to the manufacturer’s knowledgeable service professionals, what they found was that the coach was riding 6 inches too high. The staff resolved the issue, and now the motorhome is “A pleasure to drive – like a race car.” Some buyers of used motorhomes might shy away from presenting their RV to a service center with a blank check, but Laura and Ted are quick to point out that the extensive and detailed maintenance done by Newell, which cost about $8,000, has provided true peace of mind.

“It was worth every penny,” Laura says. “We only wish we had done it from the start.”
In addition to the cost of factory maintenance, the Jenkinses have made some modifications of their own. The first was installation of a new Power Tech Ultimate II 12-kW AC generator, which provides enough power to run all of their systems, if necessary. More recently, they replaced one of the motorhome’s aging rooftop air conditioning units and an exhaust fan. Along with new tires, these have been the couple’s main expenses in owning their Newell thus far – a cost far less than the asking price of many of the newer Class A motorhomes they saw when they first began their search.

While they do occasionally go to RV shows and look longingly at “out-of-the-box” buses with multiple slideouts, they have found their Newell has just the right amount of space for the two of them and their two canine traveling companions. In fact, their coach doubles as an office and classroom – Laura has continued to teach virtual math courses while traveling, and she is even pursuing an online M.B.A. – all without the risk of an icy commute.

Wherever we go, we meet people who dream of climbing behind the wheel and taking off for parts unknown. For those who are still undecided about making the leap, Ted says the answer is quite simple.

Finding high-quality used motorhomes, like this 38-foot Newell, makes the RV lifestyle attainable to just about everyone, and that’s one more reason that this 28-year-young coach is a true classic ride. 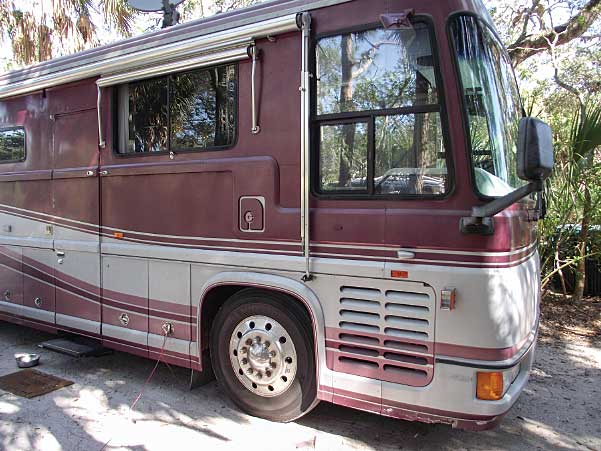 Newells like this one prove that quality workmanship stands the test of time.

Support is important in any used motorhome purchase, and Newell has one of the best reputations for customer service in the industry. This is one reason that used Newells are in high demand. You won’t find pricing guides on NADA, but a search of the current market shows that classics like this 1990 in good condition are rare and average between $50,000-$65,000. Late 1990s models are more common and start in the low $100,000s.