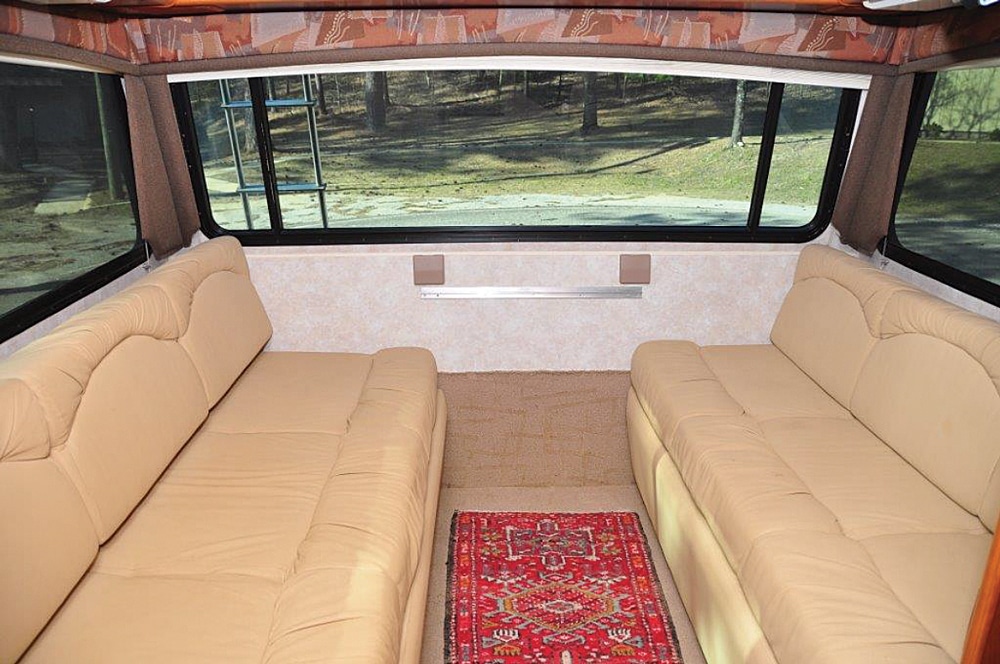 Two couples enjoy the smooth handling and easy living of the classic aircraft-aluminum Class C’s, which can still be purchased new from the factory

This article is the third in a series looking at motorhomes that have stood the test of time. They may have miles under their wheels, but they can still make dreams come true.  Each has earned the right to be called “the classic ride.”

With its retro stripes and laid-back brand name reminiscent of a 1960s surfer movie, the Lazy Daze cannot possibly be mistaken for any other motorhome. Its manufacturer is widely credited with “discovering” the Class C, and the RV itself has become something of a cult classic, with enthusiastic owners’ groups from coast to coast. It was this one-of-a-kind design that first caught our attention in the Florida Keys, where we met owners Jay and Gwynne Carlson.

“We get that a lot,” they laughed when we commented on the Lazy Daze’s unique baby-blue-and-white exterior.

The couple had purchased their 2003 unit just over a year before we met, selling their Seattle, Washington, home in 2014 in favor of adventure on the road aboard the 26½-foot Class C.

“This had always been a pipe dream of mine,” said Gwynne, adding that the transition to full-timing did not come overnight. It had taken nearly five years of planning, starting with a search for a livable and affordable high-quality RV.

“We had a 19-foot Islander Dodge van,” Jay said. “That was just a weekend warrior. We knew we needed something bigger.”

But not too big. While 26 feet may seem diminutive by many full-timers’ standards, the Carlsons planned to circle the continental U.S. for a year by primarily staying in state and national parks, many of which cannot accommodate big rigs. They looked at trailers and Class A motorhomes, but decided a Class C fit their needs.

Lazy Daze construction is unique in the Class C market. The exterior walls are covered with smooth aircraft-aluminum panels rather than fiberglass, and these can be individually replaced if damaged. The company uses a one-piece aluminum roof instead of rubber, resulting in better leak protection than many Class C motorhomes. The units are also painted with aircraft-type two-part polyurethane enamel, which is why a decades-old Lazy Daze often looks showroom new. All of this comes on a lifetime-warrantied frame.

Another unique feature of the Lazy Daze is that each new unit is ordered directly from the factory in Montclair, California, and built specifically for its owner. As a result of this “high-end” approach, the company has developed a reputation for quality and superior workmanship. Certain that this was the best motorhome to fulfill their full-time dream, the Carlsons pored over classifieds on the internet and eventually decided on a unit with 70,000 miles on the odometer that included a tow package and dinghy vehicle (a 2005 Subaru Forrester), all for a total price of $42,900. 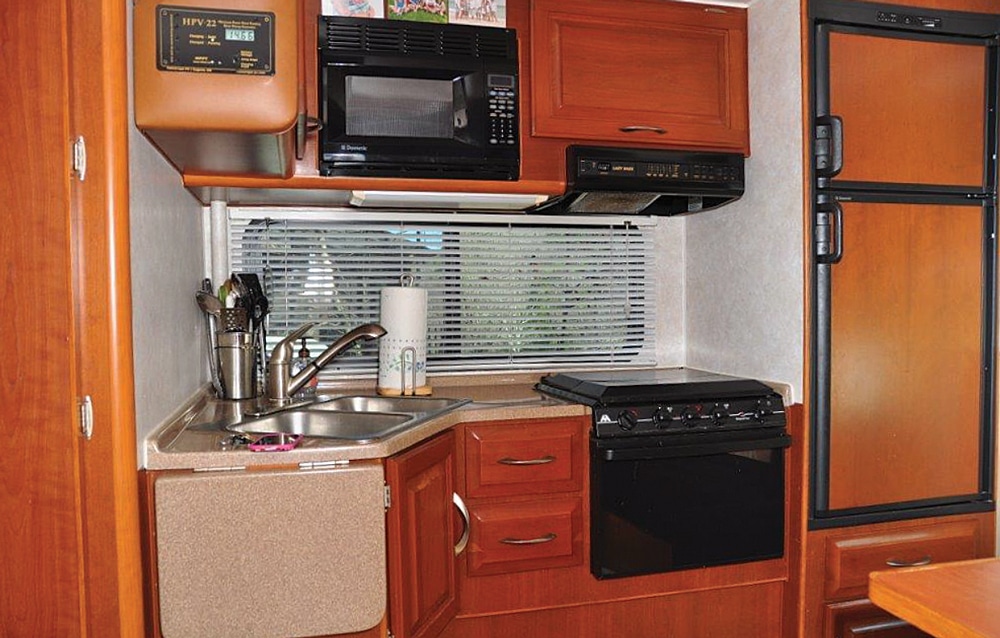 The galley makes good use of space, and the flip-up counter extension adds prep area.

As we have noted before in this series, any preowned motorhome purchase usually involves some trade-offs. This Lazy Daze had been customized with some features that were perfect for the boondocking that the Carlsons expected to be doing, including four 85-watt solar panels, a 4-kW Onan generator and double the standard battery capacity. However, the Carlsons had also wanted a midbath model with a separate rear lounge/bedroom, but had been unable to find this layout on the used market. As happy as they were with their motorhome, they couldn’t help but wonder what it would have been like to have gotten their dream motorhome directly from the manufacturer.

And, neither could we – which led us to Jeanne and Ed Gaffney of Hoover, Alabama, Wagonmasters of the SE Lazy Daze Caravan Club. They are the original owners of a 2006 50th Anniversary Edition 26.5 Lazy Daze – one of only 52 manufactured. Like the Carlsons, they did extensive research before choosing a motorhome, both online and hands-on. As first-timers, they weren’t sure exactly what they wanted, or even if they would both enjoy RVing.

“My husband wasn’t as excited about camping as I was,” said Jeanne. “He had done a lot of camping in Boy Scouts. He didn’t have great memories because they always camped in the cold in Pennsylvania.”

Their approach was to try it out before making the leap by renting motorhomes and RVing with their friends, who were Lazy Daze owners. Like the Carlsons, the Gaffneys found that they liked the ease of living in a smaller motorhome, and after comparing owners’ reviews on the web, they came to the conclusion that there was no better Class C than the Lazy Daze. They put in their order for a midbath with a rear lounge in late 2006 and took delivery in April of 2007. It has been happy trails ever since.

For one thing, the layout they chose has been perfect, offering lots of private sleeping area, a must for family trips.

“This past summer, we took our grandsons, ages 12 and 10, to Washington, D.C.,” said Jeanne, noting that everyone had plenty of space.

The rear lounge converts to a California king or two twin beds, the cabover is a queen-size bed and the dinette converts to a single-size bed, providing comfortable accommodations for five. Like the Carlsons, the Gaffneys also do a fair amount of boondocking, and appreciate the 100-watt solar panel that is a standard feature on the Lazy Daze. They also upgraded to two 6-volt absorbed glass mat (AGM) batteries and went with all LED lighting and an Onan generator, so the Gaffneys are comfortable with or without hookups.

One of the Gaffneys’ favorite features is the motorhome’s large windows, a detail that was also praised by the Carlsons.

“You have a 360-degree view,” said Gwynne. “Even though you’re in the motorhome, you still feel like you’re outside.” 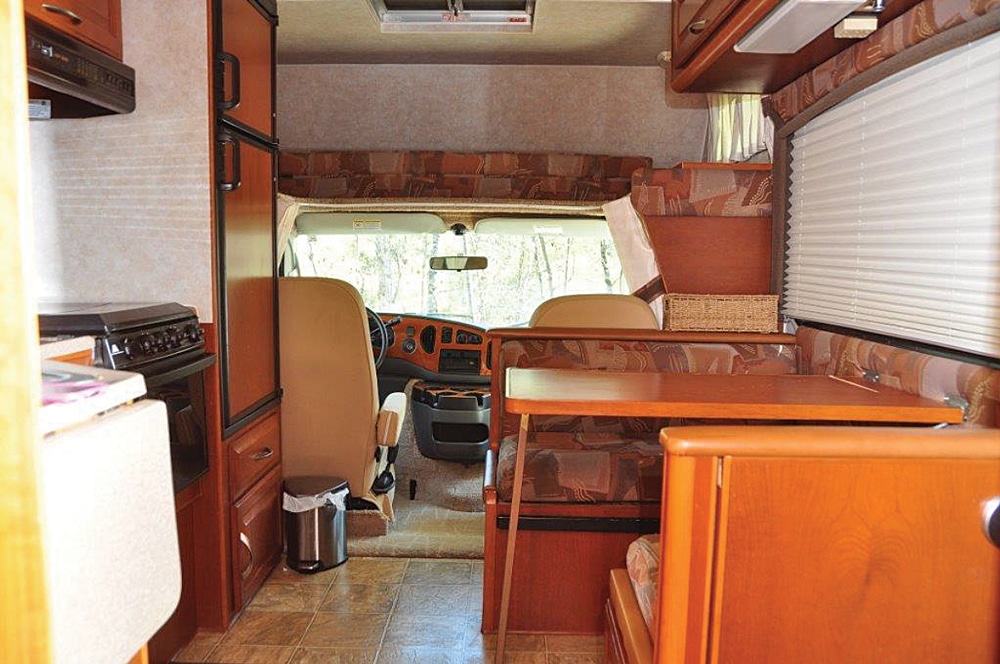 The floorplan is wide open despite not featuring a slideout.

Jeanne agrees. “The windows in the lounge area are huge, and wrap around the entire back. When we backed up to the Kenai Lake in Cooper Landing, Alaska, we could watch eagles fish and pontoon planes land and take off.”

In terms of modern technology, both couples installed hydraulic leveling systems, “a wonderful improvement from driving up on blocks,” according to Jeanne. Both also installed new HD flat-screen TVs and rooftop satellite antennas.

Both couples gave the Lazy Daze high marks for livability and dependability. In an era when many motorhomes are the size of luxury condos, these 26 ½-foot Class C’s still feel roomy and comfortable, and their size makes them easy to maneuver and park. Both motorhomes also feature the Ford E-450 chassis with a 6.8-liter V-10 engine, a tried-and-true standard. When we met the Carlsons, they had just arrived in the Keys via Michigan, Niagara Falls, Maine and Cape Hatteras. They termed the experience “wonderful,” and noted that the only repair in all of those miles had been a minor leak in a hydraulic-leveling-system hose. While the Gaffneys are not full-timers, they spend two to three months each summer in their RV, have been to Alaska twice and have spent at least one night in 40 of the 49 continental U.S. states. They, too, have nothing but praise for their Lazy Daze.

Perhaps the most inspiring thing about the experience of these Lazy Daze owners is their emphasis on the journey, not the destination. The Carlsons jokingly suggested that their one-year odyssey might well turn into two, and the Gaffneys have a 2-2-2 rule: No more than 200 miles a day, stop by 2 p.m. every day and stay two nights wherever they go.

“If you are going to invest in a [motorhome], then use it,” Ed Gaffney added. “This is a huge country with so much to see, and our bucket list is to see it all.”

Maybe that’s the Southern California surfer karma of the Lazy Daze – you don’t need a big rig to take to the open road, but you do need to stop, check out the waves and smell the salt air along the way. Which is why the Lazy Daze 26.5 definitely makes the grade as a classic ride.

If a preowned Lazy Daze fits your style, you may need to be patient; they are a popular brand on the preowned market and tend to go quickly. A Lazy Daze 26.5 from the early 2000s can be found for between $22,000 and 35,000, while a mid-2000s model is priced between $45,000 and $60,000. Newer models are hard to come by, and are offered for upward of $100,000. Of course, you can always custom order a brand-new unit directly from the manufacturer. One of the bonuses of the Lazy Daze is the support from other owners, who swap tips and DIY advice on user forums. Joining one of these groups is a good place to start your search for information on the model and options that will best suit your needs.