The Classic Ride: Home Away From Home 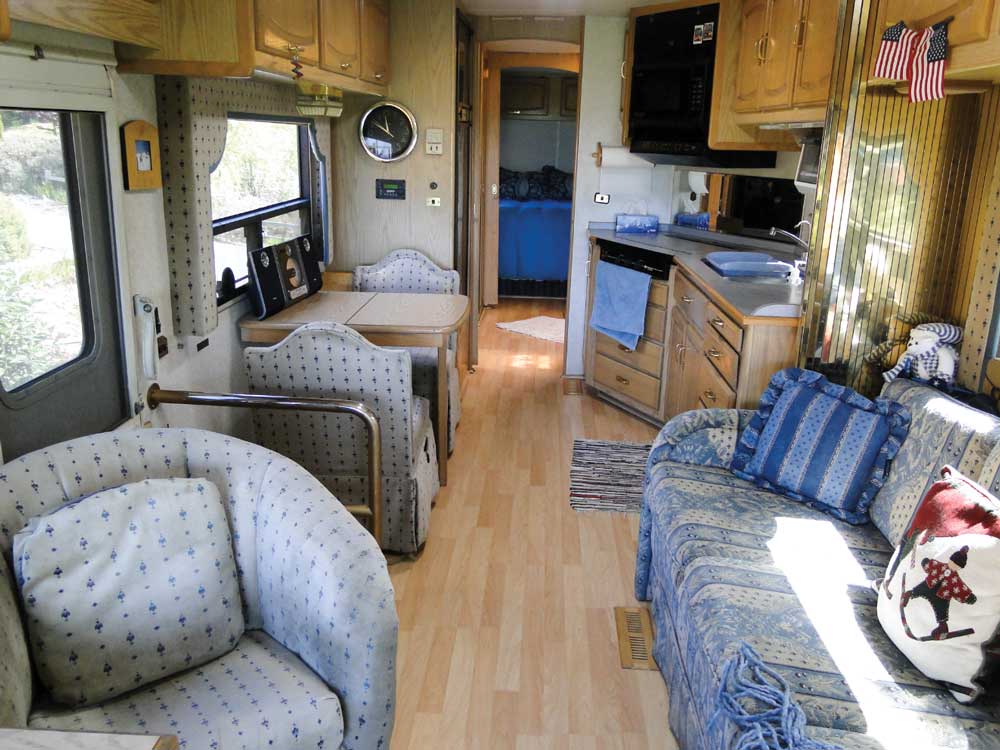 The reasons people give for purchasing an RV are as varied as the owners themselves. In more than two years of searching out classic rides, we have met couples whose motorhome doubled as a ski lodge, a beach four-wheeler, a location service for modeling shoots, and even a tow vehicle for a trailer full of goats. But Tom and Janice Lee were the first couple we encountered who purchased their RV so they could build a house.

Not that construction was their original motivation when the pair first got into camping. In 1980, Tom promised his wife that if she’d go along with buying a motorhome, they would never have to stay in a relative’s house again. The young couple’s first RV was a 17-foot Chinook on a Toyota chassis with a pop-top, followed by a 21-foot Vixen, and later by a 25-foot Sterling. They not only avoided family members’ sofa beds, the couple also averaged 8,000 miles a year in recreational camping trips.

The decision to move up to a larger Class A came after the couple bought property at Smith River in Northern California. They planned to design and build their own retirement home, and knowing this would be a long-term project, they realized a larger RV could double as an on-site residence while they worked. Not long after, the Lees were given the opportunity to purchase a 35-foot Winnebago Vectra owned by Tom’s aunt and uncle. The motorhome was purchased new in 1995, but by 2003 Tom’s uncle had passed away and his aunt wanted to sell the Vectra. One of the company’s first luxury Class A diesel motorhomes with an original base price of more than $120,000, the Vectra was well-equipped for full-time living. In good condition with only 20,000 miles on its Spartan chassis, this Winnebago fit perfectly into the Lees’ future plans.

The Lees purchased the Vectra for $40,000, living in it for nearly five years while they built their dream home. One added benefit to owning the large motorhome, at least in Tom’s mind, was the need for a much bigger garage. 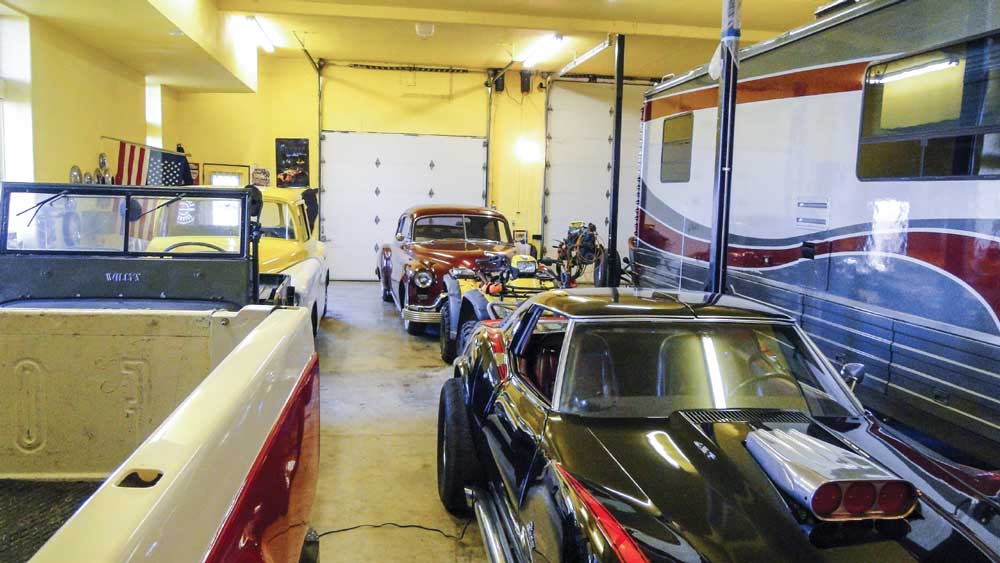 “I said she could design whatever she wanted in the house, but I needed a garage at least as big for the RV and tools,” he says with a smile. “She got a 3,400-square-foot house, and I got a 2,800-square-foot garage — so I guess she won.”

The 1995 Winnebago Vectra with dated decals before its new paint.

After construction was complete, full attention was turned to upgrading the Vectra. Janice was particularly eager to replace the baby-blue carpeting. “It must have been designed by a man who never had to clean it,” she says, only half-jokingly. The Lees replaced the flooring with wood laminate and also added a new Norcold refrigerator. Otherwise, the original appliances were functional, and the rest of the interior was in excellent condition. Janice was particularly impressed with the quality cabinetry and the detailed workmanship.

Other upgrades included four 6-volt deep-cycle batteries and replacements for the inverter and Onan generator. Tom notes that Onan is known for producing reliable equipment, but this particular generator had multiple issues. After several repairs, Tom laughs that his mechanic offered to sell the couple a new Onan at cost “if you just won’t make me work on this one anymore.”

The next project was the exterior. Like many motorhomes from the 1990s, it was white fiberglass with vinyl graphics that had grown faded and worn, and according to Janice, “definitely looked its age.” She designed the new exterior paint scheme, and the couple took it to a shop known for its classic car renovations. The Winnebago just fit into the shop bay, and the job took 10 gallons of paint at a cost of $300 a gallon. Of course, the same paint today would be $800 a gallon, so the Lees consider it a worthwhile investment, especially since it turned out so beautifully that their Vectra is often mistaken for a newer model. 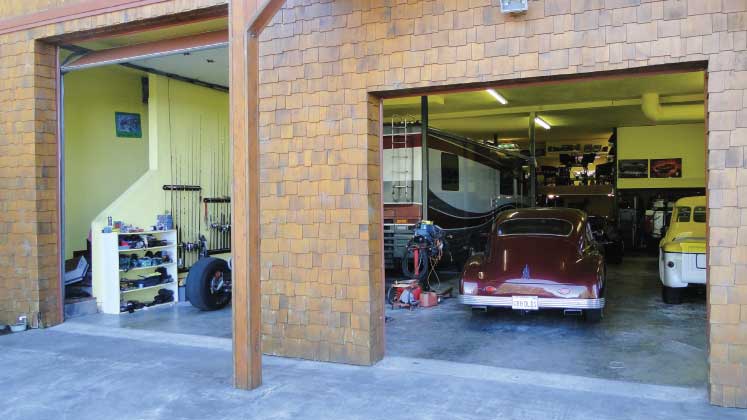 All told, the garage holds the Lees’ Vectra and eight classic cars, including the Olds Fastback painted to match the motorhome.

As always, space is one trade-off when you purchase an older motorhome. Slides were not available in the 1995 Vectra, and at only 8 feet wide it is narrower than more modern coaches. (In fact, the next model year up from the Lees’ grew by 6 inches in width.) The couple admits they wish their motorhome was “a bit wider,” but both agree they love their Winnebago anyway. They don’t feel the need to trade up, and Janice points out that all she ever really wanted in a motorhome was the ability to walk around the bed — something she can do in their Vectra.

The only other major upgrade made to their Winnebago was increased engine power, and it came as a result of having such a wonderfully large new garage. Tom, who had renovated a 1973 Corvette before the move to Northern California, realized that with 2,800 square feet, he had quite a bit of unused room.

The round sink in the split bath is an example of the Vectra’s original style and workmanship.

“I filled up the extra space with classic cars,” he says, adding, “so I guess I won after all.”
Tom has eight vintage vehicles, including a 1923 Model T and a 1950 Oldsmobile Fastback painted to match his Vectra. He also has an enclosed trailer to transport his cars to shows — and that’s where the problem developed. While the Cummins 5.9-liter, 230-hp diesel capably pushed the Winnebago over mountains, the same was not true when his car trailer was attached. Tom went with a Banks Power Pack and new fuel injectors, which combined to produce additional horsepower for towing.

“I can do a 6 percent grade at 55 mph easily and still get 10-11 mpg,” he says, joking that his Vectra gets better gas mileage than his vintage cars. 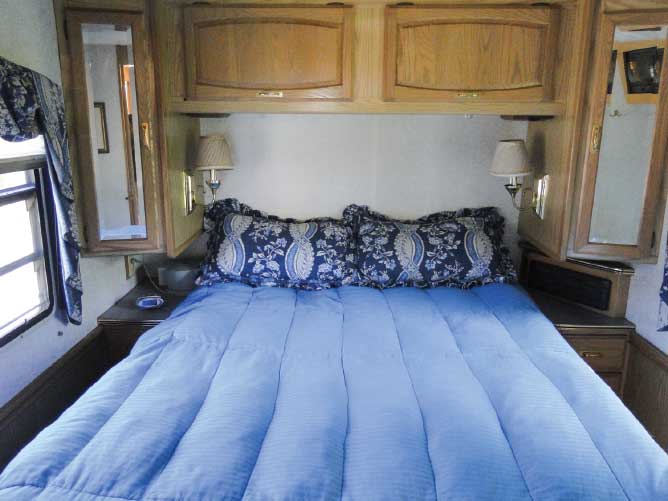 Tom and Janice have put more than 90,000 miles on their Vectra going to car shows, taking ski trips, and visiting friends and relatives. They point out that their total investment in their Winnebago Vectra has been less than $55,000, a fraction of the cost of a new diesel pusher. Tom says he spends less annually on maintenance than most owners he has met who have much newer motorhomes. The Lees hope to continue to travel affordably for years to come, and fully expect their Vectra’s diesel to make it to 300,000 miles.

That’s plenty of road ahead for this classic ride.