The Classic Ride: Finding The One 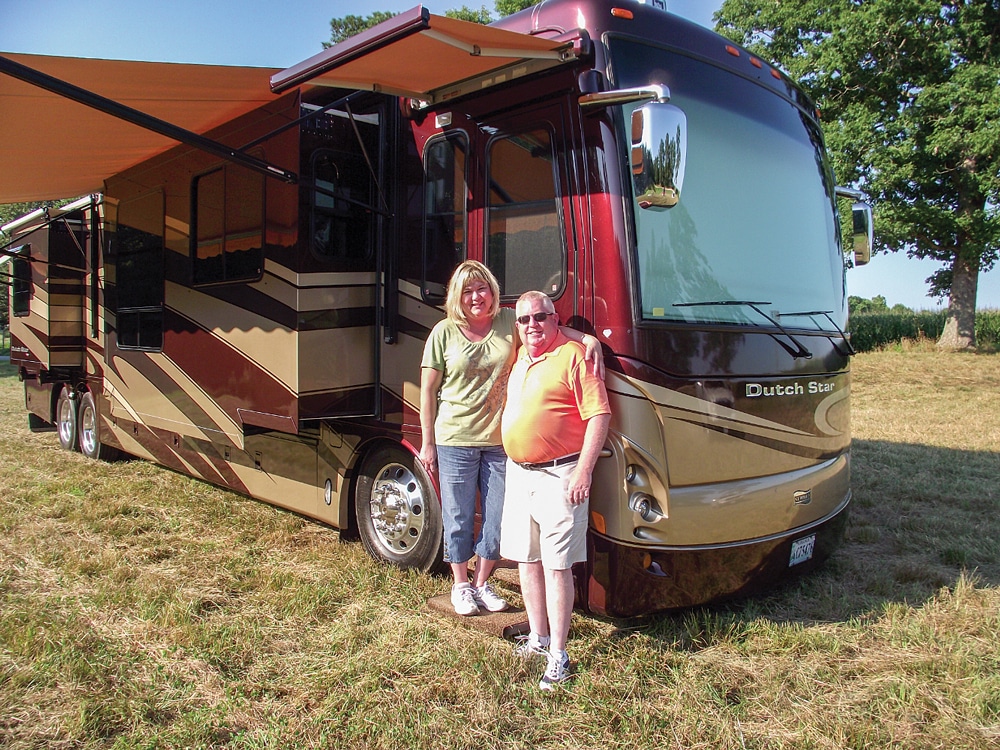 In our travels, it seems that everyone we meet has a long history of exes – RVs, that is, not spouses. We have met owners on their third, fourth or even 10th motorhome, all on the brink of moving up or moving on. The reasons are varied, ranging from size to layout, appearance to engine power. Yet every classic ride we have seen has one thing in common – its owners always tell us it is the last motorhome they will ever, ever own. For Robin and Jackie Barrack, it took a trailer and three motorhomes before they found “The One” – a 43-foot Dutch Star that they bought brand new a decade ago. For them, it is a match that continues to satisfy, season after season, mile after mile.

The Barracks’ first RV was a fifth-wheel trailer, purchased soon after they were married because they wanted to take their dog along on vacations, and few hotels at the time allowed pets. This was replaced by a succession of motorhomes as their family grew, but none of them seemed to be just right. The couple was disappointed with the reliability of their existing unit in November 2006 when they decided to look for another motorhome. They weren’t looking for a specific make or model of RV, but they knew what they wanted: dependability and enough space to comfortably travel with their sons, then 9 and 15 years of age. They looked at Class A’s from a variety of manufacturers, but were particularly impressed by two motorhomes: a 2005 Mountain Aire and a new model 2007 Dutch Star, both by Newmar. “They were just good rigs,” said Jackie.

In the end, it was the comfortable, casual interior of the Dutch Star, with its warm wood finishes and biscotti color scheme, that tipped the scales. It just felt more like home, Robin said, calling the Mountain Aire “just too fancy” for a family with two growing boys. Though the Dutch Star 4324 was actually considered an entry-level motorhome by Newmar in comparison to the manufacturer’s deluxe models, it had the attention to detail, workmanship and amenities usually reserved for luxury motorhomes.

The Dutch Star is framed with 16-inch on center studs like most stick-built residential homes. There are four slideouts, providing spacious dining, living and sleeping areas. The rear bedroom is roomy, with ample storage, a queen-size bed with a Sleep Number mattress, and a combination washer/dryer. The Barracks did not like the daily hassle of converting a dinette into a bed for their children, so they loved the facing jackknife sofa beds, which allow for an easy transition from living room to bedroom for their sons. The galley is both functional and attractive, and includes a four-door refrigerator with an icemaker and water dispenser, a microwave convection oven, a gas range and a dishwasher, all set off by Corian countertops and a tile backsplash. The unit also features two flat-screen TVs and a Sony surround-sound home-theater system.

The exterior of the Dutch Star is luxury-class as well. Newmar was an industry leader in applying full-body paint to its coaches, with a trademark Masterpiece finish included as a standard feature on the Dutch Star. Other amenities include an outdoor TV, a basement refrigerator/freezer and lighted storage compartments, which include a large pass-through compartment and one with a large built-in slide-out drawer. 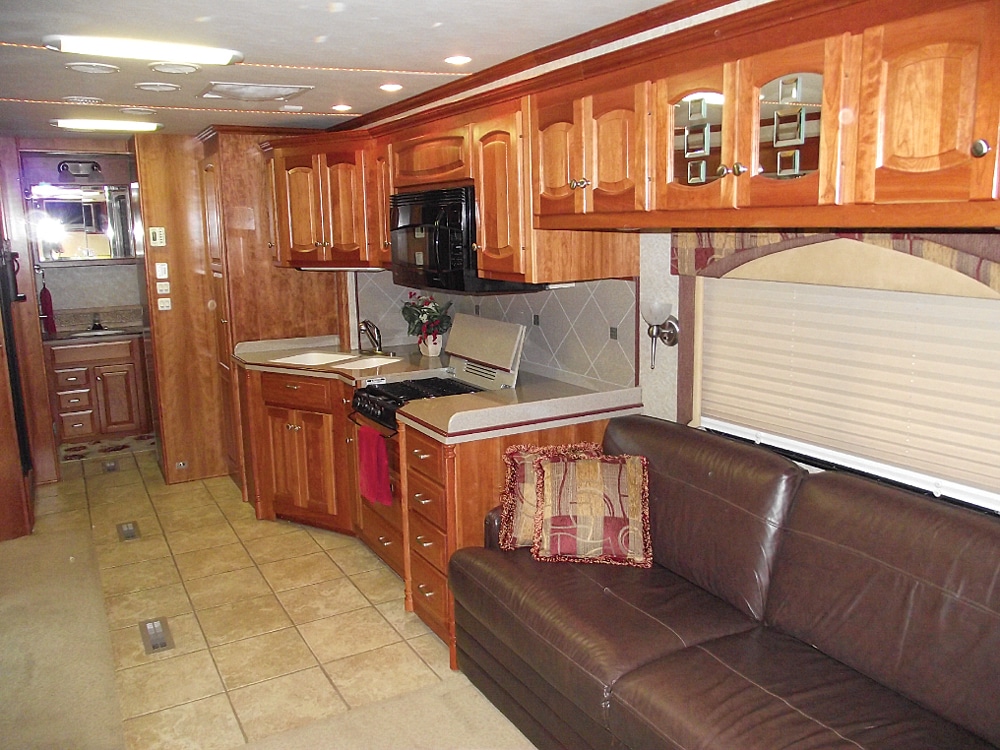 The living room has opposing jackknife sofa beds for an easy transition to sleeping area.

Of course, it’s the things you can’t easily see that matter most. The Dutch Star was built on a Spartan Mountain Master chassis with a 400-horsepower Cummins diesel, which has a track record for durability, and which was much appreciated when they had a tire blow out on one of their trips.

“It never shimmied or shook. You hear about people losing control, but there was no problem handling it. You could barely tell we had lost a tire,” Jackie explained.
The coach also features an 8-kW generator, a 4-kW power inverter, a bank of four 6-volt batteries on a pullout exterior tray and even a small rooftop solar panel. And since things you can’t see can also get you in trouble, the coach also had a rearview color monitor and right and left side-view cameras.

While there was no question that this motorhome was the perfect fit for the Barracks when they bought it in 2006, there were less expensive coaches on the market. Even with a final purchase price nearly 28 percent below the list price of $324,000, the Dutch Star 4324 was a big investment. The question was whether it was one that would pay off in the long term.

Say what you will about hindsight, the Barracks’ foresight when buying their Newmar was 20/20. The Dutch Star has become synonymous with quality and is one of the few models to be produced for more than 25 years.

The Barracks’ Dutch Star has carried their family to Walt Disney World every Thanksgiving, and to sites across the U.S. including Las Vegas and Yellowstone three times, and on a more than 6,000-mile trip to Glacier National Park. On the rare occasions when their coach needed work, Jackie has been impressed by what he calls Newmar’s “incredible support” both on the road and on visits to the factory in Nappannee, Indiana. It is a testament to Newmar’s design that the only real modifications the Barracks have made in all those miles was to add window awnings and shade visors. 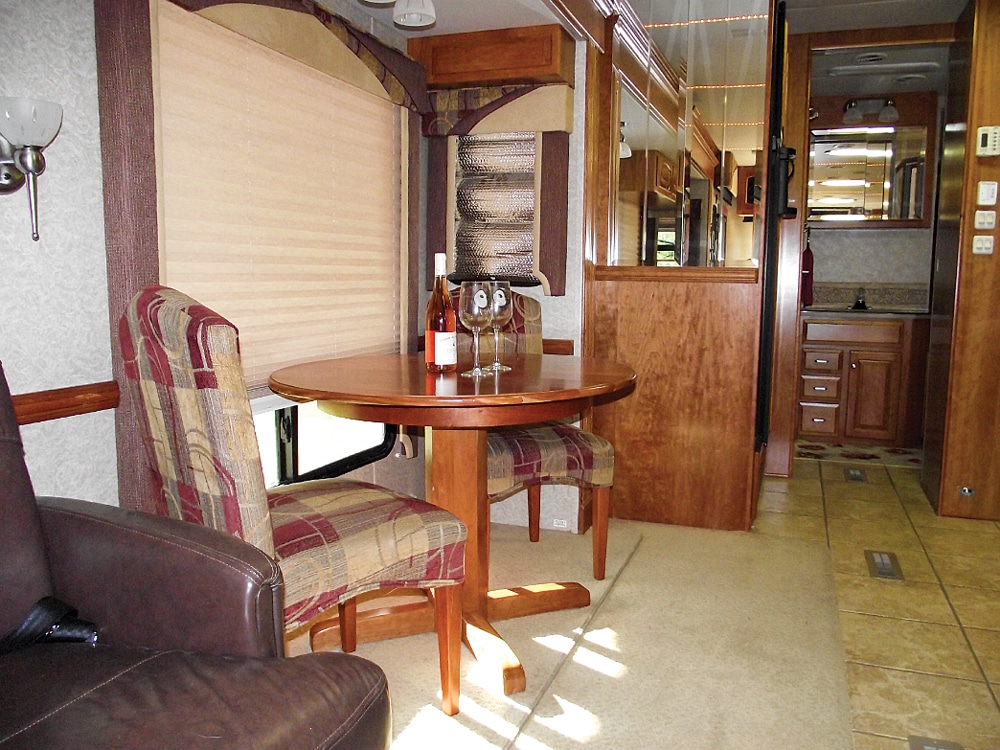 The roomy galley is fully equipped, while the four slides allow ample space for moving about.

“We had to. It was 107 degrees on the black asphalt in Las Vegas,” Jackie says with a laugh and a shake of his head.

With one son living in Richmond, Virginia, and another starting college, you might think the Barracks would be considering selling their 10-year-old coach. The days of big family vacations are behind them, and the couple is extremely busy between running GeoProducts, their building-supply store in Kilmarnock, Virginia; and Cedar Run Farm, where Robin breeds New Zealand Kiko goats and also produces her own line of goat-milk soaps and lotions. Instead, their Dutch Star has fit right into this new stage of their lives. The Dutch Star now doubles as an office on the road, allowing one of them to log in and check the store cameras or do the paperwork while the other drives, as they attend goat auctions across the country.

In fact, when we saw their motorhome for the first time, it was heading to Georgia, pulling a livestock trailer.

“People do look at us, hauling goats with this big, beautiful motorhome,” Robin smiles.

And their Dutch Star is beautiful. The exterior paint still shines, and the interior shows like a much newer unit. As it makes the transition with them to this new chapter of their lives, there are a few things they might like to change: hardwood floors perhaps, to replace the carpet, and an upgrade to new HDTVs. They would also consider adding a third air conditioner. Other than that, they can easily see using their motorhome into their retirement years. That is, of course, if they can ever slow down long enough to retire. For now, the Barracks are enjoying the comfort the Dutch Star offers while they work.

“And we can carry our dogs,” Jackie adds, proving that some things never change.

Not all motorhomes have the design, workmanship or quality to carry us through the seasons of our lives with grace and style. The Dutch Star does, and that is why it is still “The One” for the Barracks, and a modern-day classic ride. 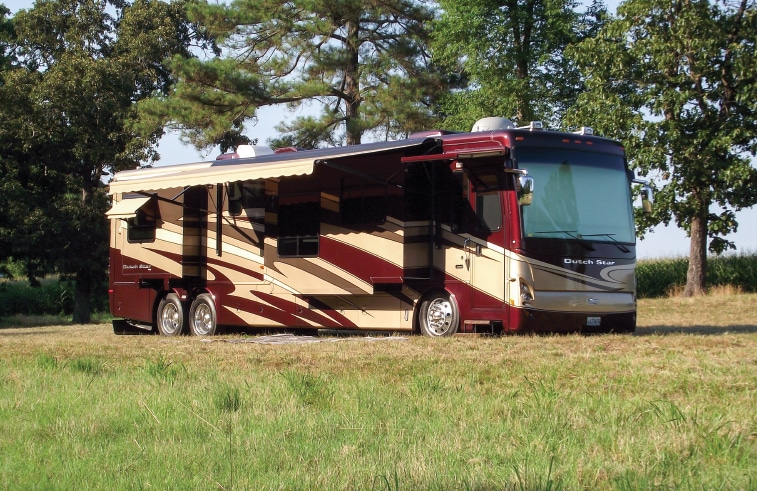 If you think a Newmar Dutch Star might be right for you, we’ve got good news. These motorhomes are recognized for their quality, and hold their value better than many other Class A’s of similar age. While a 2006 Dutch Star can be found for less than $90,000, well-kept units on the used market currently average around $125,000, and those with low miles in mint condition can go as high as $175,000. Given the Dutch Star’s reputation, that still represents a solid investment.