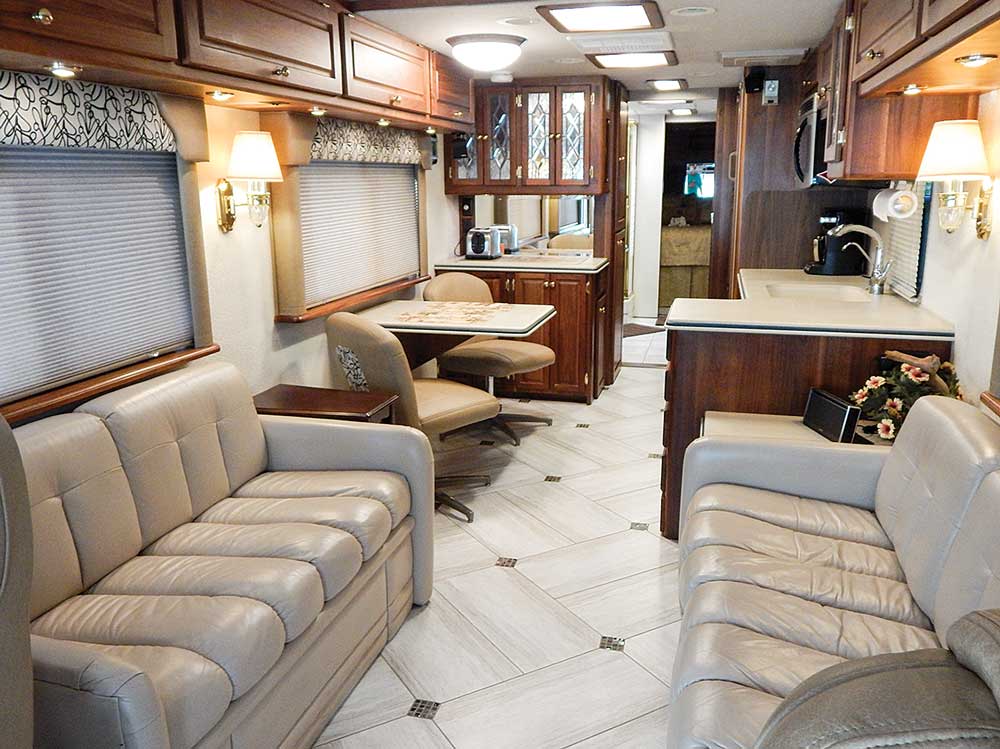 Buying a motorhome often begins with a dream – although in Rich Smith’s case, the word dream was a synonym for unattainable. For years, every time a large luxury coach would pass them on the highway, he would turn to his wife, Shana, and say, “Now that’s what we need.” Unfortunately, her response was always the same: “In your dreams.”
While a new motorhome did not fit the couple’s budget, Rich knew he had the skill to refurbish a used model. He also understood that the most crucial factor in making his dream a reality had nothing to do with transmissions or tires – it was all about getting spousal support. Rich had an E-250 box van that he had converted to transport bikes and riders, and also to use as a living space when traveling for his off-road oriented motorcycle shop. He decided to introduce Shana to camping by planning a trip in the van over a long June weekend. The couple headed to Cedar Point, Ohio, where for four days Rich made his wife coffee each morning, grilled steaks over charcoal every evening and lit a campfire each night.

“After just one day she said, ‘Ahh, this is the life,’” Rich laughs. “She was hooked.”
In 2009, armed with his wife’s support, Rich began the search for a used Class A. He knew he wanted his motorhome to fit inside his garage, which was 45 feet deep but had a door only 12 feet tall, and he also wanted to stay within a budget of $50,000-$75,000. A friend (and lifelong motorhome owner) suggested he look for a Foretravel U320, and went over a list of telltale signs that could signal potential problems later, like leaks and side-wall delamination. Rich did some research on the Foretravel and liked what he saw, particularly the Cummins M-11 450-hp turbodiesel engine.

Above: Tile with glass block inserts, set in a herringbone pattern, give the living area an open feel.

“I think the biggest mistake most people make is getting too small of a motor,” Rich says. “The larger motor works less and gets just as good mileage,” he adds, pointing to his rig’s average of 8-9 mpg.

In addition to ample horsepower and torque, the U320 boasts an Allison six-speed automatic transmission with an integral hydraulic retarder system, solid-wood cabinets, large storage bins with sliding drawers and doors that open bus-style, and window awnings. Foretravel also has a 50-year reputation for producing high-quality custom handcrafted coaches. After hours of online investigation and quite a few phone calls, Rich narrowed his search to six units, all located within a 300-mile radius of the Foretravel plant in Nacogdoches, Texas. He flew out from his home in Pittsburgh, Pennsylvania, and looked at each. As is often the case, pictures can be deceiving.

One of the most promising motorhomes had been photographed on only one side, thus effectively hiding wheel wells and lower side walls that had been damaged by highway debris. Even the coach in the very best condition, a 40-foot-long 1997 Foretravel listed for $65,000, had two cracked windshields. Undaunted, Rich made a low offer, and the seller eventually agreed on a price of $53,000.

“I called Shana, had her wire the money, and I headed home with my new pride and joy,” he says, smiling at the memory. 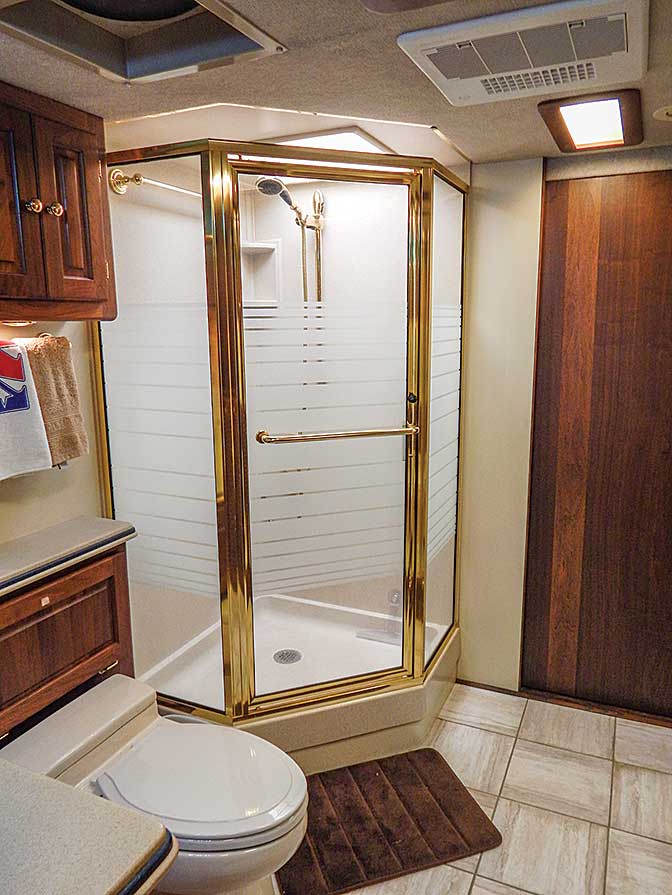 Groutable luxury vinyl tile in a neutral shade helps brighten up the bathroom.

Of course, their new pride and joy needed some work. The original white gelcoat finish included two belt lines of decals that were faded and weather-checked. When the Smiths called the factory to check on getting replacements, they were told the decals were no longer produced. The body shop manager, Justin Lindsey, explained that new decals could be custom-made at a cost of about $5,000, but he warned that the old decals were a nightmare to get off. Instead, he recommended full-body paint.

“I wasn’t prepared for that answer,” Rich says, but after weighing the options, he headed for Texas.

In addition to new paint, the factory also applied a durable roof coating, installed a new lower front cap panel with a sprayed-on rubberized coating that included modern headlights and fog lamps, and replaced the windshields and all the side windows with dual-pane dark-tinted units from Peninsula Glass. The total cost for all the work was about $23,000, and the difference it made in the U320’s appearance was nothing short of amazing.

With the exterior in like-new condition, Rich began work on the rest of the motorhome. Fortunately, many high-quality systems came standard with the 1997 Foretravel, including a Power Tech 10-kW generator, an Aqua-Hot hydronic heating system, ducted low-profile air-conditioners with heat options and even Bose surround sound. With these major systems all in excellent condition, Rich started his coach’s update by refurbishing the house battery compartment and installing AGM batteries. He then installed a tire-pressure monitoring system and also replaced all of the air bags, belts and coolant hoses, and re-cored the radiator and replaced the air charge cooler.

Inside, the walnut cabinets and solid-surface counters were in excellent shape, as were the appliances. To give the coach a more modern look, the galley and living area floors were fitted with groutable luxury vinyl tile in a herringbone pattern with 3-by-3-inch glass block insets at the corners. The same tile was used in the bathroom, this time in a brick pattern, and the bedroom was re-carpeted. The Smiths also reupholstered the valances with ultraleather and contemporary print cloth inserts, and the blinds were replaced with Bali pleated shades.

Of course, all of these modifications weren’t made at once. Rich notes that he and Shana now have about $85,000 invested in their motorhome, but it was made affordable by tackling just a few projects each year. One major cost-saving factor is that Rich did everything, except the exterior paint and windows, himself.

“You need to be either really rich or mechanically inclined to refurbish a motorhome,” he notes with a laugh.

While some owners of older motorhomes regret the lack of slideouts, both Rich and Shana are happy with their Foretravel as it is. They appreciate having the full use of space when they are on the road, particularly as Shana is a Type I diabetic who needs to get up and get something to eat frequently while traveling. And while they currently have no aspirations of full-timing, they do hope to make the time to take more trips.
“We love this motorhome,” Rich says emphatically.

Of course, I had to ask – how did reality compare to the idyllic picture of the RV lifestyle that Rich painted on that first camping trip? Let’s just say that husbands everywhere who would like a bigger RV might want to consider trying Rich’s approach.

“He gets up and makes the coffee and he does all the cooking. He more or less waits on me hand and foot,” Shana laughs. “It’s the only time I get this kind of break, so I love it!”
This 1997 Foretravel proves that, with a little hard work, it is possible to fulfill the dreams of both partners without breaking the budget. That makes the U320 a worthy addition to our list of classic rides.

New full-body paint, completed at the Foretravel factory in Nacogdoches, Texas, updated the exterior of this 1997 U320.

In 1997, a luxury Foretravel U320 like the Smiths’ would have cost close to $400,000. Today, units in good condition (but with the original white gelcoat and decals) can be found on the used market for between $50,000 and $70,000. While full-body paint is costly (estimates for a 40-foot motorhome can range from $12,000 to as much as $25,000 without additional repairs), the quality construction of the Foretravel makes it a good choice for refurbishing.