Left for dead after a damaging refrigerator fire, a salvaged 2003 Coachmen Cross Country Elite has been resurrected to custom-coach majesty

Michelangelo once said that every block of stone has a statue inside it, and it is the task of the sculptor to discover it. That is a quote that Lamar Johnson likes to use to explain the potential he saw when he got his first look at the 2003 Coachmen Cross Country Elite 37.5 that would become his own work of art. It is an opinion not initially shared by his wife, Winda.

The motorhome had all of the prerequisites on Lamar’s list: a 300-hp Cummins diesel, two slides, hydraulic levelers, a washer/dryer, a split bath and a front entry door. Unfortunately, it also had serious damage from a refrigerator fire, leaving a gaping hole in the side wall and roof. The interior walls, carpet and upholstery were all burned or blackened by smoke. Everything would need to be gutted and replaced. The scope of the renovation was so massive that the couple who had purchased it at auction had given up before they had even begun. Yet none of this phased Lamar.

Lamar and Winda Johnson are enjoying the good life after an intensive six-month restoration of their salvaged Coachmen Cross Country Eilte 37.5 Class A.

“From the beginning, I was envisioning what it could look like. I wasn’t intimidated,” he says. “The chassis was intact, and the diesel engine was in good working condition. I just looked at everything else and thought, ‘OK, all this can go.’”

The price for the salvaged coach was $7,500, exactly what Lamar and his wife had gotten from the sale of their old gas-powered Coachmen Chaparral fifth-wheel. And perhaps it was no coincidence that they found this Coachmen in Phoenix, Arizona, a city named for the mythical bird that rises from the ashes to be reborn. In the end, Winda agreed, and they took their “project RV” back home to California.

Lamar’s first concern was repairing the roof and side wall. He got a quote of $8,000 for a new roof, but after doing some research and watching videos on the internet, he decided it was a job he could tackle with a little help. He needed to replace some of the roof’s aluminum frame as well as an overhead interior ceiling truss, and fortunately a friend knew a welder who agreed to do the job after hours – for a mere $40. The remainder of the repair he did himself, at a total cost of $1,200 for materials.

Once the motorhome was sealed from the weather, the interior renovation began. Lamar contacted Coachmen, and the reps were extremely supportive, sending him the electrical schematics as well as detailed information on the motorhome’s layout. He gutted the rig from outside the rear bedroom door, where all the fire damage occurred, to the front windshield and began the task of rebuilding. In the process, he replaced wallboard, ran new 12-volt DC wiring, added a new rooftop air conditioner and laid a porcelain tile floor. He found that the cabinets were all still structurally sound, so they were stripped and stained. Once cleaned, the Corian countertop was also still in good condition, but most of the appliances had to be replaced. He chose an apartment-sized residential refrigerator and a convection microwave, and kept the original four-burner LP-gas cooktop. He finished off the new, modern kitchen with undercabinet LED lighting and an attractive tile backsplash.

All of the furniture in the main living area was replaced, and both the driver and passenger seats were reupholstered, one of the few jobs Lamar did not do himself. He also added a 52-inch rear-projection TV, a 32-inch flat-screen TV, a new stereo/DVD player, additional speakers for surround sound and several new reading lights. The bathroom also received a makeover, with new tile and a tempered-glass shower door to give the space an open, roomier feel. 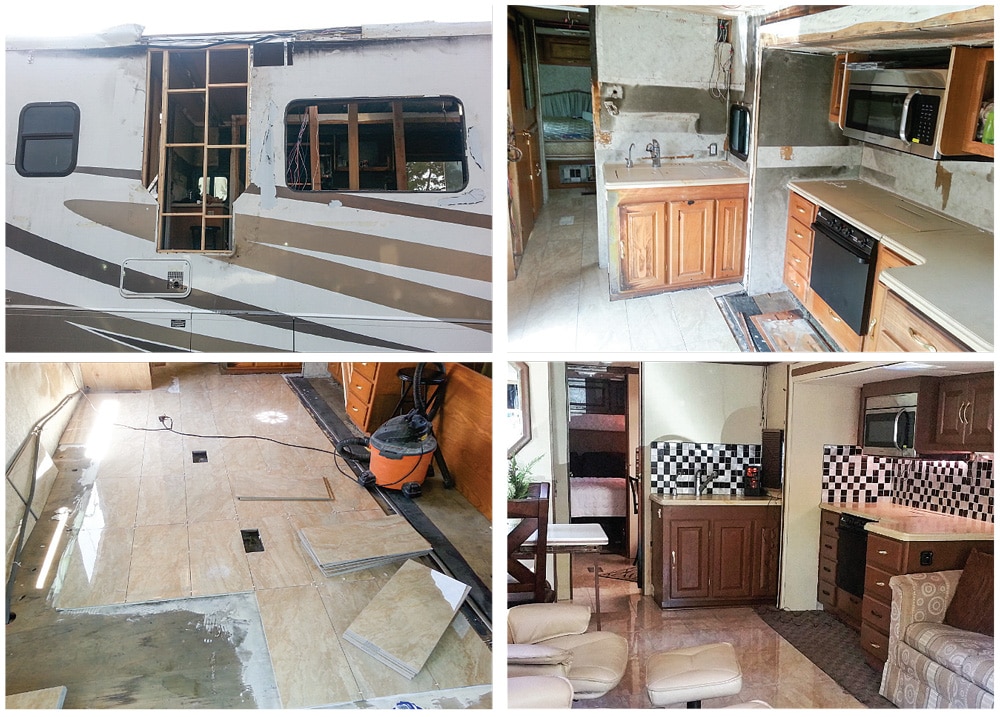 A refrigerator fire caused extensive damage to the motorhome, both inside and out. Johnson began by repairing the roof and frame, and then worked his way to the interior. Inside, restoration included laying a new wood-look tile floor, repairing and painting walls and replacing the furnishings. Fortunately, Johnson found most of the cabinetry to be structurally sound, so it only required refinishing.

The end result? An interior that rivals any new coach – and it only took six months.

“I got a lot of help from friends, and my wife was very supportive,” Lamar says. “She would bring out lunch, and diesel fuel to keep the generator running, so we could continue to work inside the RV when the temperature was over 100 degrees.”

Winda would also encourage him to “hurry up and finish our future penthouse” because she couldn’t wait to travel, an attitude that Lamar says was “a great motivator.” He also credits the RV community for its support.

“Whenever I needed guidance, I found it there,” he says. 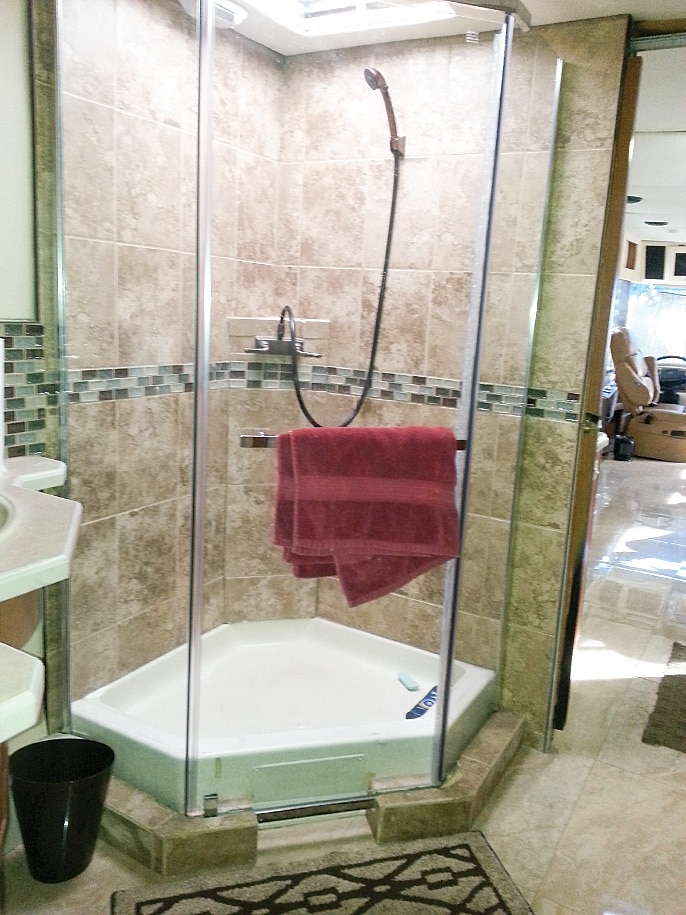 He was equally impressed by his motorhome’s manufacturers. In addition to getting help from Coachmen, he also contacted Freightliner, makers of his chassis, to get engine specs, information about the hydraulics and information on finding replacement parts. There was a small leak in the plastic coolant reservoir, and they helped him find a new reservoir, along with the engine-coolant sensor. He praises both companies for their dedicated customer service, which made his own job much easier.

Lamar estimates that he has about $23,000 invested in his Coachmen at this point. He still plans to have the entire exterior professionally painted sometime in the future. He would also like to add a Banks PowerPack System to the Cummins engine to boost power and to compensate for the added weight of the new flooring. Still, he is satisfied with his results thus far. He and his wife, and 10-year-old daughter, Keysa, spend vacations and holidays at their site in the Mountain Lakes Resort in Lytle Creek, California, or traveling to the beach, and they all feel like the motorohome is part of the family.

“This was a route I could explore without going into financial debt. I knew what I wanted – a diesel engine, two slideouts, hydraulic levelers, even the layout – and I knew the price of a diesel coach. The best thing about this RV after the renovations is that I have no payments, and everything works just the way the factory designed it, only with my vision.”

Buying a salvaged motorhome is certainly not for everyone, a fact Lamar freely admits. In most states, including California, any damaged vehicle with repair costs that will exceed 75 percent of its value can be declared a total loss by the insurance company. Given depreciation and the exponentially higher costs of rebuilding an RV versus a car or truck, older motorhomes that have sustained damage have a greater likelihood of being branded a “salvage” title. This doesn’t mean they can’t be brought back to life, but it does present a series of hurdles – and some long-term problems – for prospective owners. 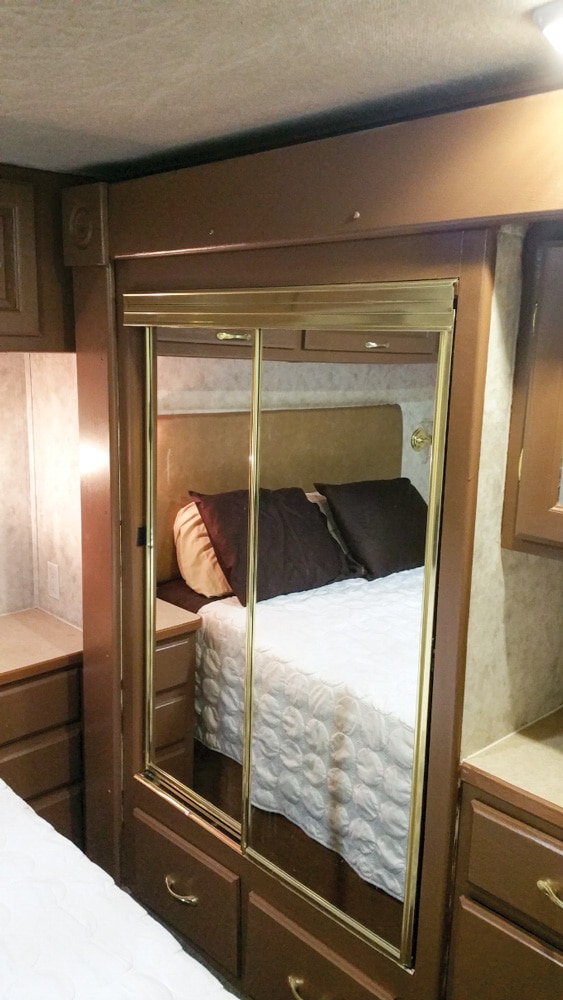 The built-in closets and dressers in the bedroom were refinished to like-new condition.

In California, a salvaged vehicle can be rebranded as “revived” (some states term this as “rebuilt”) if the owner follows certain requirements. To re-register a salvage vehicle, the owner must have bills of sale for all the major and minor parts used in the reconstruction of the vehicle, and an application for registration along with a vehicle construction statement will need to be given to the DMV. Revived salvage vehicles are also required to be inspected by the DMV or the California Highway Patrol (CHP) before DMV can issue title and registration. Even if the vehicle has been restored to pristine condition, it will always have a branded title, affecting potential resale value and insurance coverage.

None of that dissuaded Lamar. As he points out, he did not rebuild his Coachmen to sell it; he intends to use it. He expects that this motorhome will carry him and his family through the decades until retirement and beyond, at a fraction of the cost of even a used diesel-powered motorhome with the same amenities.
“Besides, would Michelangelo ever part from his David?” he asks only half-jokingly because this motorhome really is his masterpiece.

As happy as he is with the product of his labor, Lamar has some cautionary advice for anyone considering a project of this magnitude. First, make sure you know what you want in a coach, since this is a job you only want to do once. Once you find your diamond in the rough, do your research to know what it will take to complete the job (building materials, special tools and skills like welding, plumbing, electrical or mechanical expertise). Then ask yourself, do you have the time, spousal/family support and patience for the project? Be honest with yourself; when you look back at your projects in the past, are you a finisher, or do you have a tendency to leave jobs incomplete?

One look at the Johnsons’ 2003 Cross Country Elite is proof of just what positive thinking and elbow grease can accomplish. Revived by one man’s dream, this motorhome ascended like a phoenix from the ashes, rising to take its place as a true classic ride.

To Salvage, or Not to Salvage?

4Although the coach already looks great, Johnson’s future plans include a professional paint job on the Cross Country’s exterior.

Salvaged motorhomes are not an option unless you are a skilled DIYer. Even then, you need to carefully weigh the costs versus benefits. Many insurance companies will provide only liability coverage for coaches with a revived/rebuilt title, so all of that hard work could potentially go up in smoke. If you ever plan to sell, dealers often will not accept these RVs as trade-ins, and potential buyers may be scared off by the branded title. On the plus side, salvaged motorhomes are cheap and do give you the opportunity to upgrade affordably, something you might not be able to finance if you pay the price for the same older motorhome with a clean title. For example, a 2003 Coachmen Cross Country Elite title sells for anywhere from $52,000 to $85,000 on the used market, and it is likely that the carpet, appliances and upholstery would still need updating. This makes the Johnsons’ $23,000 investment a good deal, particularly since they have no intention of selling their motorhome. The bottom line: Salvaged vehicles are a gamble, but in some situations, that gamble can pay off, so caveat emptor – let the buyer beware.