The Classic Ride: Built to Last 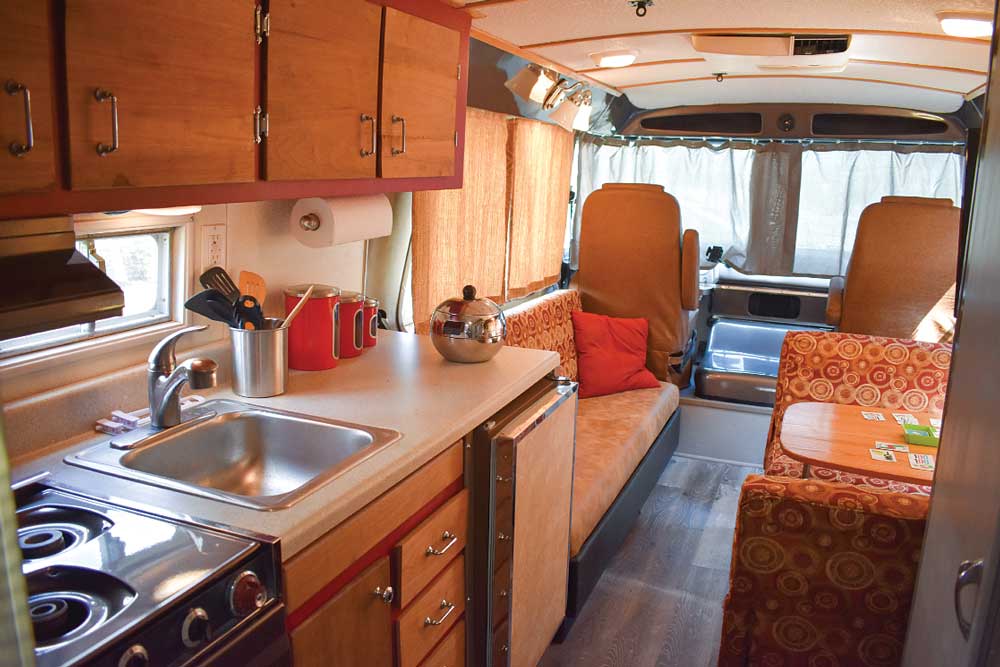 It seems like all the motorhome owners we meet have a tale to tell about finding their classic ride, and Ralph and Michelle McClelland are no exception. When I ask how he came about purchasing his vintage 27-foot Dodge Travco, he smiles.

“That’s an interesting story,” he says. “My father-in-law dragged it home with the tractor.”
The motorhome had been sitting idle in a neighbor’s field for 20 years when Ralph’s father-in-law made a $1,000 offer for the derelict 1966 Class A. He worked on it for years, getting it in running condition and even redoing the interior, but the project was never completed. Eventually the Travco was passed to Ralph and Michelle, who purchased it from her father two years ago. A recently retired engineer, Ralph had been thinking about restoring vintage cars in his newfound spare time, but decided to tackle the Travco instead.

“We kind of wanted to finish it for him,” Ralph says. “Plus, a car is usually all guy; there’s not a lot for a wife to get involved in. A motorhome renovation is a great project for a couple.”

They were drawn to the Travco’s “immaculate lines,” immediately recognizable from its role as a screen star on The Donna Reed Show as the Stone family’s “house bus,” and one of Charles Kurault’s RVs from the On the Road segments of CBS News. More recently, the Travco has enjoyed new attention as the ride of FranÃ§ois Arnaud’s character on the NBC television series Midnight, Texas. In addition to its “cool look,” McClelland notes that “the fiberglass shell lasts forever.”

Ralph and Michelle McClelland tackled their 1966 Travco renovation as a “couple’s project.”

“These things are tanks,” he says admiringly.

For RV enthusiasts, Travco motorhomes are in the same league as industry icons such as the Airstream and the Avion, and for good reason. The aerodynamic Class A was built from 1965 until the late 1980s, available in lengths ranging from 21 to 32 feet. The concept began in 1961, when Ray Frank built the original “Dodge Frank Motor Home,” a more conventional, boxy-looking RV. Frank moved to a more rounded fiberglass body and increased the window sizes, and the motorhome evolved into the Travco/Dodge design that graces the motorhome the McClellands own today.

The original Dodge chassis used in the Travco could handle a gross vehicle weight rating (GVWR) of more than 6 tons, and utilized a live dual-rear-wheel axle and an I-beam front axle suspended on semi-elliptical leaf springs. It was powered by the Chrysler 318 CID V-8, a small and efficient engine that was known to cruise at up to 70 mph. It is no wonder that the motorhome became a best seller soon after its release.

Despite its good bones, the McClellands’ Travco still needed a tremendous amount of work. While Ralph was confident in his mechanical skills, he admits he’s “no painter,” so the couple turned to Martin Custom Autobody in Waltonville, Illinois, for full-body paint. Because old weatherstripping around the windows had failed, there was also significant damage to the previously renovated interior. The McClellands also had the company work on the interior, repainting the original oven, bolsters and dash, and replacing the steering column. 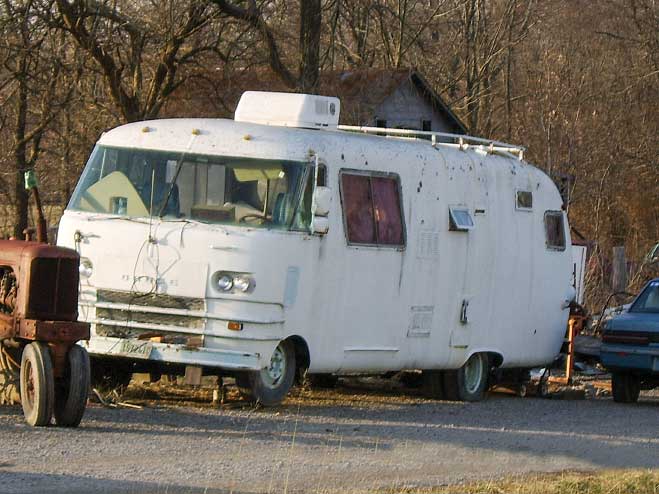 The McClelland’s vintage motorhome on the day it was towed via tractor from a neighboring farmer’s field after sitting idle for 20 years.

As a part of the interior renovation, the couple decided to replace the captain’s chairs with modern, more comfortable seating. The dinette and sofa were reupholstered in a red Art Deco pattern, and they installed wood-look laminate flooring. The resulting living space is bright and cheerful, managing to look both modern and vintage at the same time. Ralph credits Michelle with the Travco’s appearance.

“The color selection, the decorating – that’s all her,” he says.

There was also plenty of work to do below the surface. The wiring and plumbing systems had to be modernized, including replacement of the toilet in the unit’s wet bath. A previous owner had replaced the tired Chrysler 318 with a Dodge 360 engine, but after so many years without use, it had to be rebuilt, along with the braking system. Ralph picked up the job where his father-in-law left off.

“You name it, it’s been re-done,” he laughs. “The A/C still works, and the windshield wiper arms are the same, but that’s about it.” 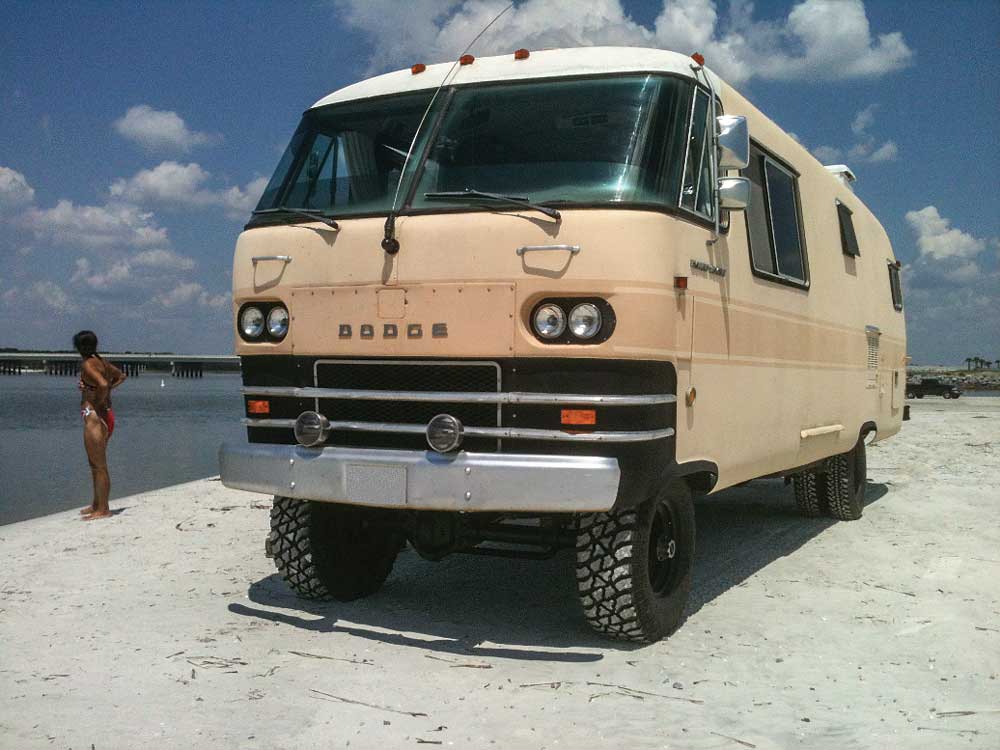 While the McClellands use their 1966 unit primarily for rallies and short trips, other owners, like the Rattes, have been making extensive treks aboard their 1968 Travco – like the one from their Long Island home to Florida – for more than 30 years. Richard Ratte never had to do an extensive renovation on his motorhome because his 27-foot Travco was in basically good condition when he purchased it in 1986. He found it in a lot in New Jersey with an asking price of $5,000, and he was able to drive it home without an issue. In fact, his Travco is still powered by the original Chrysler 318 engine. It needed its head shaved, but otherwise, “it’s still going strong,” he says proudly. 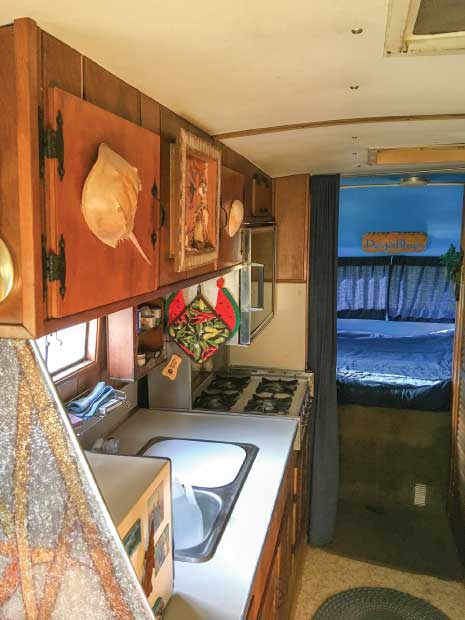 In 1987, Richard converted his motorhome to four-wheel drive using an axle from a 1968 Dodge WM300 Power Wagon, allowing he and his wife, Pat, to drive their motorhome on the beach. He replaced the refrigerator and the air conditioning units, and switched out the heavy cast-iron Kohler generator with a vintage 1970 6kW Onan. The interior, with its dark louvered cabinetry, has maintained its period look, though it has been updated with an ocean blue color scheme and various decorative nautical touches. The wet bath was tiled both for practicality and to brighten the room. For the exterior, Richard pressure-washed and painted the Travco himself, choosing earth tones to match the East Coast beaches the couple frequents. Otherwise, the motorhome is much the same as the day he bought it.

Both the Rattes and McClellands note that there are challenges involved in purchasing a vintage motorhome, even one as well-built as the Travco. The lower the price, the more likely it will need extensive work.

“When you find one today, there’s a good chance it’s been sitting around for years. Even though the fiberglass body is durable, you can see a lot of damage from water and neglect,” Richard observes.

It is certainly a scenario familiar to Ralph McClelland, and a good reason why he and Richard recommend some mechanical experience before tackling major system repairs. Fortunately, the Travco has an advantage over many other vintage motorhomes in that its Dodge chassis was widely produced, making used parts more accessible.

Richard Ratte with his wife, Pat.

And as with many iconic motorhomes, a close-knit community of owners and enthusiasts has evolved, so advice and assistance are always available on forums and through the Dodge Travco Motorhome Lovers Facebook page (www.facebook.com/groups/358395874142/about), which has nearly 2,000 members.

If, after careful consideration, you still love the vintage look and are considering a major RV renovation, Ralph has some encouraging advice.

“If you can re-do a room in your house, you can take on a project like this one.”

Restoring a vintage motorhome is an affirmation of our history and of the American spirit. In this disposable age, where thousand-dollar cellphones are considered obsolete in just a year or two, the Dodge Travco is proof that some things are built to last. Still running the road, still seeking adventure at 53 years and counting – definitely, a classic ride.