The Classic Ride: Boats and B’s 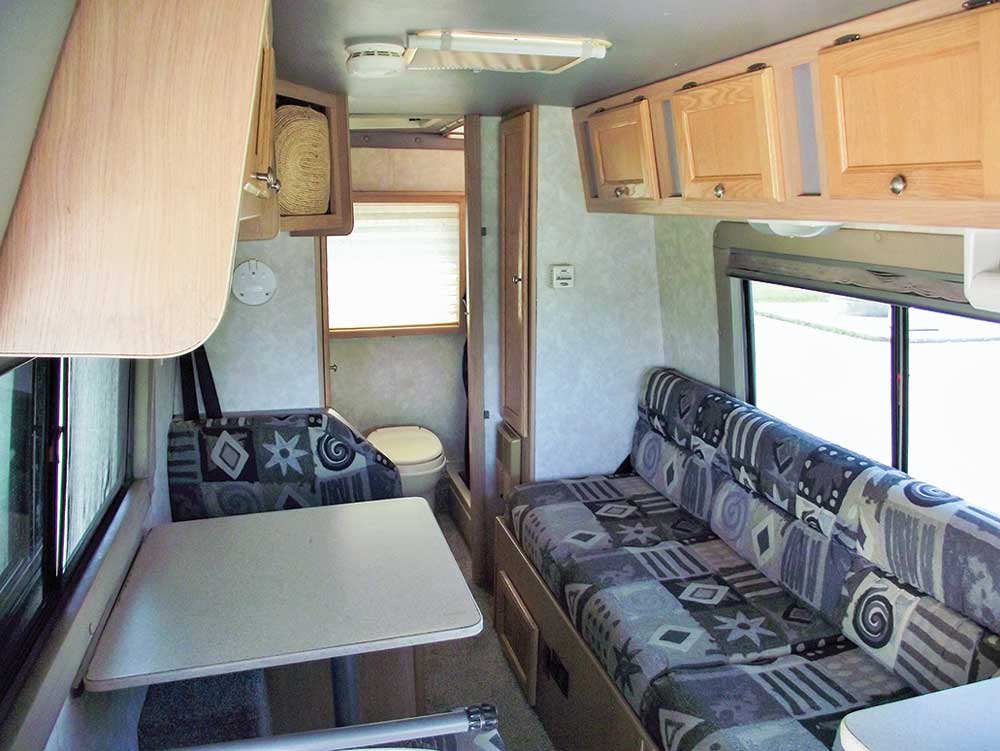 Life is full of difficult choices. Take the decision to sell the house and travel full-time: Do you buy a boat and sail the open seas, or purchase a motorhome and take to the open road? If you are Robert and Becky Nordstrom, the answer is simple: Why not do both?

We first met this adventurous couple while on a sailing trip near our home in Virginia. We had just tied up at the Urbanna Town Dock when an unfamiliar Class B motorhome in the parking lot caught our eyes. It didn’t take long to track down the owners – as luck would have it, they were on the boat right next to us.

Large side windows open up the living space

It isn’t uncommon to meet liveaboard boaters, but these are the first ones we’ve ever known who are also enthusiastic RVers. It is an understatement to say that the Nordstroms have embraced a life less ordinary. In 2009, when their youngest child left home, they sold their house near Charlotte, North Carolina, and moved aboard their 40-foot catamaran. In his job as a remote program manager, Robert could work from anywhere with Internet access, and the couple found they loved snowbirding on the boat, with summers spent in Chesapeake Bay and winters in the Florida Keys and Caribbean. There was only one drawback – they could only explore what was accessible by water. They tried keeping a car on land, but they found their desire to travel was still complicated by what Becky calls their “spontaneous lifestyle,” and the fact that they wanted to take their dog, Maggie, along on trips. 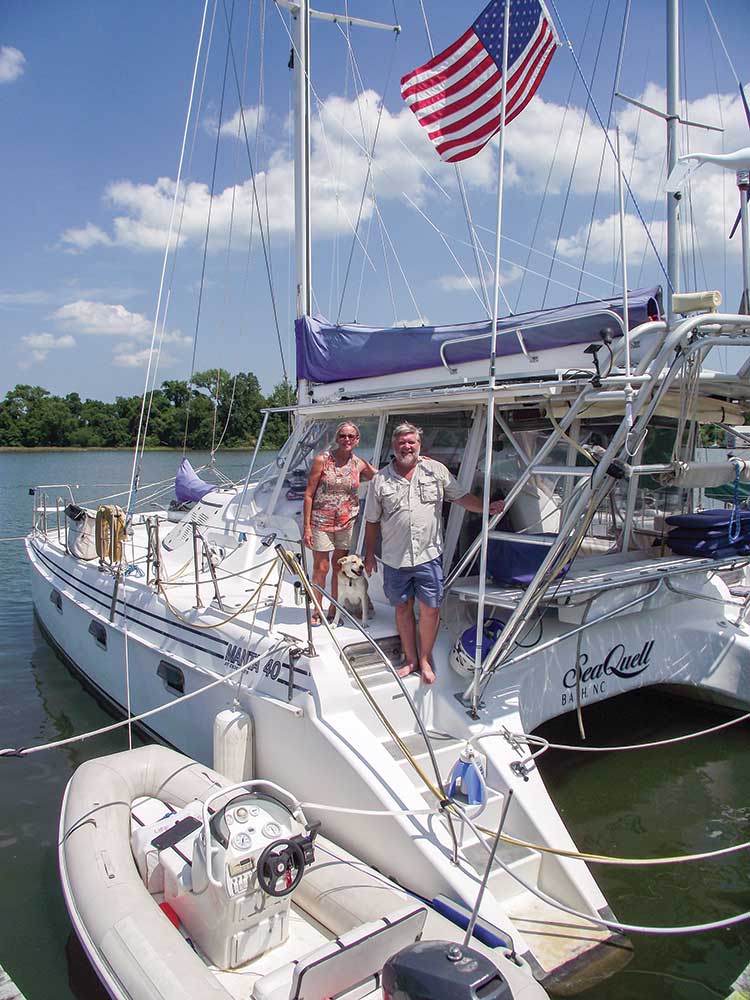 Robert, Becky and Maggie aboard their other “mobile” home, a catamaran.

“It can be hard to find a pet-friendly hotel where you want to go, especially at the last minute,” she notes.

They decided that what they really needed was a motorhome that could double as the family car.

That narrowed their search to Class B units with a cost comparable to a typical family-sized SUV, which meant looking on the used market. They narrowed their search to anything with a Freightliner chassis, since Robert, a former Freightliner service director, knew the company produced a quality product. In 2014 they began visiting dealers to get a feel for what was available and in the process added one more requirement to their wish list – a full bathroom.

“In everything we looked at, the bathroom was just so small that Robert couldn’t fit in there and close the door,” Becky laughs.

Then they saw the 2005 Forest River MB Cruiser. At 22 feet, 5 inches long and 7 feet wide, the Cruiser handled and parked more like a car than a motorhome. Its 2.7-liter, five-cylinder Mercedes-Benz diesel engine sipped fuel while feeling Iike a V-8, and with a Freightliner chassis and roomy back bathroom, it covered all of the Nordstroms’ requirements. It also sported a full galley, including a 2.7-cubic-foot refrigerator with freezer space, a two-burner stove and a microwave. Another plus was the storage – this Class B had generous overhead cabinet space inside and a rear spare-tire trunk with plenty of extra room. The Nordstroms were also drawn to the open feel of the unit, created by large rear and side windows and the absence of interior walls. They were also thrilled with the Cruiser’s 5,000-pound towing capacity, which would give them the flexibility to add a toy-hauling trailer for trips. The decision to buy was made even easier by a selling price of $34,000, making the MB Cruiser no more costly than a full-sized SUV, and packing in far more potential for comfort and fun on the road.

While the unit was in good condition, at 9 years old it was lacking some modern necessities. The first modification the couple made was one they both saw as essential – a backup camera. Even with its open floorplan and sizeable windows, the Cruiser has some significant blind spots, something Becky found out on her first turn at the wheel. She was backing out of the parking space when Robert told her to stop and put the transmission in park. Then he motioned for her to get out and take a look behind the Cruiser. 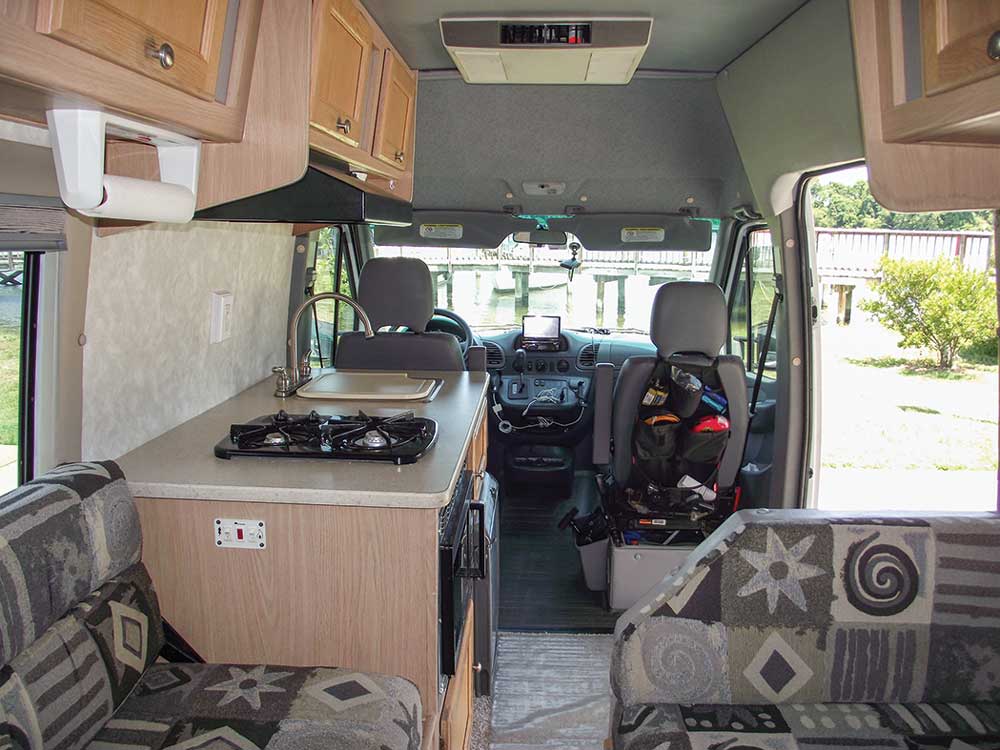 The Cruiser sports a full galley opposite the large sliding door that, when open, also increases the feeling of space in the interior.

“I was about that close to hitting a tree,” says Becky, holding her hands just inches apart.
They installed a bundle that included the rear backup camera, large dash-mounted screen and a Bluetooth-compatible AM/FM/CD/DVD stereo receiver. The 2.5-kW LP-gas generator wasn’t operating, so they replaced it with a slightly larger 2.7-kW unit. They also replaced the 10-foot patio awning with one that is 13 feet long, and Robert installed two rooftop MAXXAIR vents.

Inside the motorhome, the upholstery and the woodwork were in good shape, so the only pressing job was the carpet. A water-pipe leak had soaked the floor, loosening dirt and leaving behind stains. Once the plumbing repair was complete, the Nordstroms got estimates to remove and replace the carpet. In the end, they purchased a remnant for $40 and did the work themselves.

“Of course, we also had to pick up $400 worth of tools to do the job,” Robert says, adding, “but we still came out ahead, and we got to keep the tools.”

There are still changes the couple would like to make. The first is to mount a new 26-inch flat-screen TV, a modification they were readying to do when we met. Another is to replace the fixed passenger seat with one that swivels, making it more usable while in camp. A third is to add an outdoor shower, since they utilize their indoor shower as a storage area on longer trips.

After three years and 36,000 miles, the Cruiser has more than lived up to the Nordstroms’ expectations. Although the MB Cruiser was only produced by Forest River from 2003-2006, the Nordstroms have been pleased with the manufacturer support, and parts have proven easy to find, plus their RV has required little more than standard maintenance since its purchase. Day to day, it serves as a reliable grocery-getter, day-tripper and transport to and from the airport when Robert has to travel for his job. Then, when it’s time for a vacation, they need only stock the fridge and pantry, and the Cruiser transitions into a completely self-contained motorhome. They hook up their 12-foot trailer, complete with kayaks, bikes and a motorcycle, and the Nordstroms are ready for their next adventure.
In the three years that they have owned their motorhome, the couple has explored parts of New England, the Appalachian Mountains, the Outer Banks and inland Florida. They do an annual trip to Stone Mountain, North Carolina, with two other camping couples. More recently, they used the Cruiser to attend their son’s wedding, staying at a campground in Biloxi, Mississippi, so close to the ocean that their tires were touching the sand.
In addition to vacation travel, having a motorhome instead of a car also makes the sometimes complicated logistics of sailing and moving a vehicle from port to port more comfortable. Robert tries to time transferring the Cruiser with business trips, “boondocking” on the drive to their next sailing port and flying out of a nearby airport.
“It’s perfect for what we use it for,” Robert affirms.

For all that they love about their Cruiser, they do have one complaint – the bed. As is the case in most Class B’s, the sleeping quarters must be broken down each morning. In the Cruiser, the sofa opens and the dinette folds down, creating a spacious 60-by-72-inch bed, which necessarily blocks transit from the galley to the bathroom.

“It’s not a huge inconvenience,” Becky says, buts she admits that a dedicated bed is something they would factor into any decision to buy a larger unit.

That is a possibility they leave open for the future, after Robert retires. For now their MB Cruiser is just right, giving them the ability to travel both by land and by sea, making this 12-year-old Class B a fun and functional classic ride. 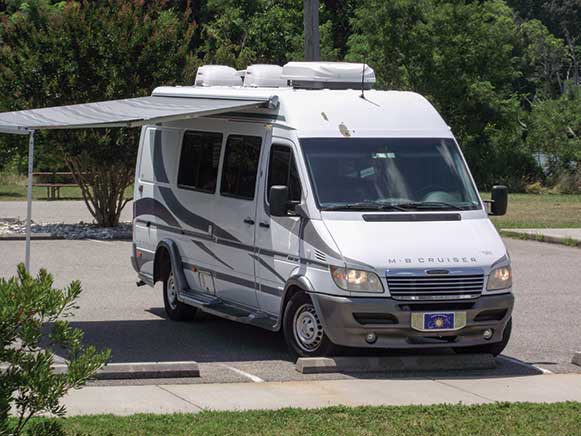 4At just under 22½ feet long and 7 feet wide, the MB Cruiser can fit into tight spaces but lives large.

Because it was only manufactured for four years, the Forest River MB Cruiser is in limited supply on the used market. It also continues to get rave reviews on RV forums, another reason this Class B has maintained its resale value in recent years. Current listings range from $32,000-$39,400 but, considering the Cruiser’s track record, that is money well spent.