The Classic Ride: An Intriguing Transformation 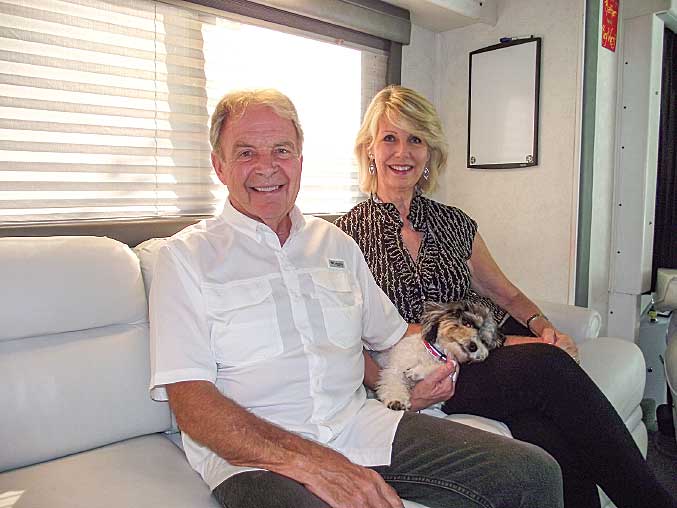 The decision to go full-time in a motorhome is usually a complicated one, involving years of planning and preparation. That is, unless you’re Clay and Debi Ratcliffe. In less than 12 months, they went from not even thinking about purchasing a motorhome to living in one, and they will be the first to tell you that it has been quite a ride.

Debi and Clay Ratcliffe relax inside their renovated Intrigue with their puppy, Cody.

Their adventure began in 2016 when a friend suggested they look at his 2000 Country Coach Intrigue. He knew the Ratcliffes spent a lot of time away from their New Smyrna Beach, Florida, home, promoting and filming offshore boat racing for Clay’s business. In fact, they were working on a project in Key West, Florida, and living out of their 42-foot boat when the idea of the RV came up and they decided to take a look.

At first glance, the 40-foot Intrigue did not impress. It had been sitting unused for years, and all of that time in the Florida sun had caused significant fading and checking of the exterior decals as well as heat damage to the south-facing windows. Fortunately, the condition of the interior was a little more promising. Expecting what they call the “claustrophobic feel” of the darker woodwork often seen in older motorhomes, the Ratcliffes were thrilled to see the Country Coach’s bright-white cabinetry. Other pluses were the open floorplan and the roomy rear bedroom with a queen-size island bed. Yes, the carpet, tapestry valances and gold fixtures were dated and, yes, the body definitely needed work, but all of those things could be changed. More important were the mechanical and structural integrity of the Intrigue. With only 34,000 miles on the Cummins 350 diesel engine and six-speed Allison transmission, working systems throughout and no sign of leaks or other structural damage, both of them felt the Country Coach was worth restoring.

“I guess you could say we saw its potential,” Debi says.

There was only one problem. The Ratcliffes had fallen in love with the Keys and were about to buy a house there, and there was no place on the lot to park a motorhome. Clay pointed this out to Debi, and his wife’s reaction surprised him.

“She said, ‘Then let’s scrap the house’,” he remembers, laughing.

Clay wasn’t so sure.

“He asked me if I thought I could be happy living in a motorhome,” Debi says. “I told him, ‘As long as we’re traveling.’”

The decision made, they settled on a price of $32,000 and began the process of downsizing their possessions to fit their new home. While living on a boat had accustomed them to smaller spaces, the Ratcliffes still had a condo in New Smyrna Beach, three storage units and a rented airplane hangar, which Clay referred to as his “man cave.” They pared down their belongings to only what could fit in the Country Coach and a single 10-by-15-foot storage unit; a process that Clay admits was harder for him than it was for Debi.

At the same time, they began the renovation of the Intrigue. Clay’s work with offshore racing convinced him that any paint that could stand up to saltwater, UV rays and speeds in excess of 180 mph on a powerboat would be perfect for a motorhome. He contacted a DeLand, Florida, performance-marine-paint facility and then he and Debi worked on the design. Clay favored red and black, and after looking at dozens of RV exteriors, Debi knew she wanted softer graphics than those found on most modern motorhomes. She drew out her idea for the sides, emphasizing “a free look, not real tight,” and they took their concept to their painter, who designed a continuation of Debi’s sketch for the Country Coach’s rear panel as well.

The process of prepping and painting took weeks, including removal of the decals and extensive sanding where their presence had etched the surface. This was followed by the application of four coats of a high-performance paint and 11 clear coats, with wet sanding between each one.

“You can run your hand over it, and it feels seamless,” Clay notes.

It also looks stunning. Our first glimpse came while in a campground on our way back from a solar eclipse trip in South Carolina. As we drove past the Ratcliffes’ Intrigue, we stopped to stare at our reflection in all of those glistening clear coats and knew we were looking at the next classic ride.

The mirrored backsplash and an emphasis on white gives a sense of space in the bathroom.

Our conclusion was confirmed when we stepped inside the Country Coach the following morning. The interior’s white color scheme is in sharp contrast to the dark exterior, a surprising visual twist that makes the living area seem larger than you might expect with a single slide. The dated tapestry valances and slideout inlay had been replaced with a light gray ultraleather, and the couple had installed a contemporary aircraft-grade carpeting to match. All of the gold hardware had been replaced with stainless steel as well, and together with the original white cabinetry and white ultraleather upholstery, these changes created a sleek, modern look. It also blended perfectly with the existing tile floor and gray-and-white solid-surface countertop in the galley.

All the appliances, including the two-burner stove, convection microwave and refrigerator were original, though the coach did sport a clunky 1990s TV that needed to be replaced. The TV was built into an area over the dash and stuck out far enough to be a head-banger when entering the coach. Clay had recently removed the old unit and was rebuilding the cabinetry around it to make room for a new flat-screen monitor. While some minor renovations like replacing the TV and a few remaining gold fixtures were ongoing, the majority of the work had been completed. Debi says the entire process was made “more interesting” by the fact that they were living in the coach while much of the work was done. She is quick to note that while the couple did “the little things” like replacing hardware themselves, the larger jobs were left for skilled craftsmen.

“We were blessed to find people who were good at what they did,” she says gratefully.
Another blessing was the support of Country Coach’s parts department staff, with whom Clay has been in frequent contact. He emphasizes the importance of being thoroughly familiar with your coach, from reading the owner’s manual to being involved with maintenance and mechanical work. The couple jokes that they don’t just drop the Intrigue off at the shop – they drop off Clay, too. A self-professed “gearhead,” he watches everything that is done so that he can better understand his motorhome.

Knowledge has also been key in Debi’s transition to the RV lifestyle. She was surprised to find how many women did not drive their own motorhomes. She immediately signed up for an RV driving course, an experience she credits with her comfort behind the wheel.
Another key to the transition has been the purchase of a 33-foot trailer to haul the couple’s Cadillac Escalade and their two motorcycles. The custom design includes side fold-down “wings” that allow the bikes to be unloaded without having to first remove the SUV. Clay admits he spends a lot of his time working on the trailer and jokes that it has become his new “man cave.”

“Sometimes you each need a brief break when you’re sharing 320 square feet,” he laughs.
The trailer increased their total length to nearly 74 feet, requiring Clay to call ahead for permits as they travel, and leading the couple to get handheld radios to assist with parking. Typically Clay will give directions from the ground while Debi maneuvers the coach and trailer, a system that has caused quite a stir in some campgrounds. Their favorite story involves pulling into a very narrow Key West campsite at 11 p.m.

“Everyone had their lights on, and all of these men came outside, looking panicked. Debi laid it in perfectly so the dual wheels were just 1 inch from the edge of the pad,” he says proudly.

“They didn’t see Clay with the walkie talkie,” Debi laughs. “All these men were watching a blonde park the coach!”

It takes only a few minutes with Debi and Clay to appreciate how much they are enjoying their motorhome. In less than 14 months, they have transformed their 18-year-old Country Coach into a showplace, and it, in turn, has transformed their lives. That is the power of a great motorhome, and what makes this 2000 Intrigue a classic ride. 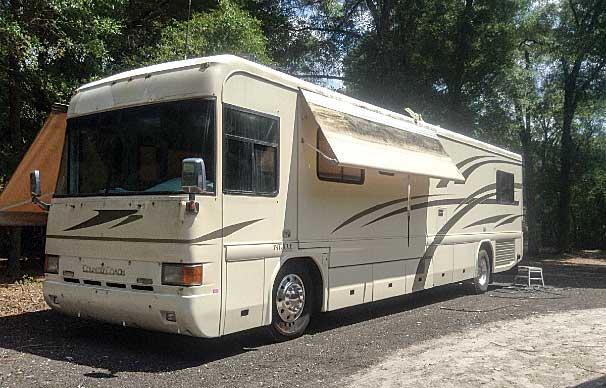 The 2000 Country Coach Intrigue with original decals and awning.

Country Coach was founded by Bob Lee, formerly of Caribou Manufacturing (which later became Monaco). He owned the company until 2002, and the high-end motorhomes built by Country Coach during that era have a reputation for quality construction. A 2000 Intrigue in good condition sells for between $45,000 and $69,000 on the used market, making the Ratcliffes’ purchase a great deal. They estimate their total investment with all upgrades came in at less than $100,000.