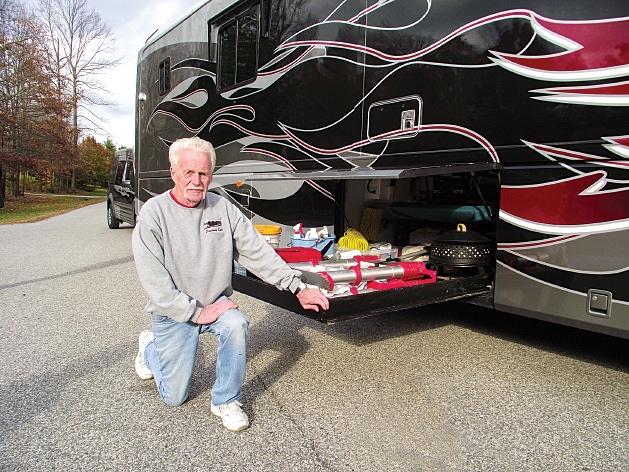 Beauty is only skin deep. Faded paint will not ruin a trip, but a blown head gasket, faulty electrical system, or crowded sleeping arrangements certainly can. For anyone in the market for a used motorhome, outward appearance must be secondary to the unit’s structural integrity, the dependability of its systems and the livability of its layout. That was the mindset of first-time buyers Dave and Jackie Gilbert in 2011 when they set out hoping to find a big rig with strong mechanical performance and all of the comforts of home, but without the big price tag of a new motorhome.

The 2003 40-foot Beaver Santiam they found at a repo sale fit the bill perfectly. With a scant 17,000 miles on the 330-horsepower Cummins turbodiesel engine and an asking price of $70,000, the Santiam seemed like a good deal. A product of the former Monaco Coach Corp. of Coburn, Oregon, the Beaver line was recognized industrywide for its durability, starting with the proprietary Roadmaster raised-rail chassis and Alumaframe superstructure, which featured steel-cage support and a steel-frame floor. The Santiam series also came well-outfitted with Thermopane windows, a 7.5-kW Onan generator, Pacbrake braking system, hydraulic leveling jacks, and a 10,000-pound hitch receiver. But it was what the Gilberts found inside the motorhome that impressed them the most. The 2003 model’s spacious layout included triple slideouts – two opposing in the living room/galley area, and a third streetside in the bedroom. The result was an airy, expansive floorplan that left plenty of room for entertaining or bringing grandchildren along for a ride. The Santiam even boasted both a half-bath and a full bath complete with tub, as well as a full-size washer and dryer. Then there were niceties normally found only in newer units, like the light on the dash that reminds you the TV antenna is still up.

“It was the little things that someone thought of that impressed me the most,” Dave notes.

Dave also updated the interior by adding wood trim with recessed lighting on the ceiling, mimicking the styling of newer units. Jackie felt the cockpit privacy curtains advertised the coach’s age, so these were replaced with automated shades. The Santiam came with a dishwasher, a plus for some families, but the Gilberts found they seldom used it. Instead, the appliance became a repository for glassware – a use that did not mix well with the rough Alaskan highways they encountered on one of their trips. Once they swept up the broken glass, they decided that what they really needed was more storage. Dave replaced the dishwasher with two drawers he designed and built himself, and also customized the forward oak cabinetry to house a larger flat-screen TV. He also added large slide-out drawers to the Santiam’s generous basement storage areas, perfect for taking the guesswork out of finding tools. Purchasing these sliding trays can run into the thousands, but once again, Dave’s handyman skills allowed him to do the work for a fraction of the cost.

From above left: The Gilberts’ DIY interior updates included reupholstering the dining room chairs and sewing matching throw pillows for the couch; adding wood molding and rope lighting to the ceiling for a recessed look; and creating new window treatments from an extra bedspread to match the new bedding.

Not that the refit of the Santiam was all work and no play. The couple divided their time between customizing their motorhome and taking to the highways, traveling across the U.S. to the West Coast, Canada and Alaska. In all of those miles, the Gilberts could not find a thing about their Santiam that they didn’t like – except the dated exterior. On the outside, there was no amount of wax that could change the fact that the Santiam’s paint looked more than a decade old.
That all changed when the Gilberts attended a rally in North Carolina and saw a display of motorhomes with refinished exteriors. They spoke to a representative from Pro Custom Inc., and realized that repainting the motorhome was an affordable option, especially when compared to replacing it with a newer unit. They decided that this was an opportunity to do something beyond the standard “swirls” that adorn so many coaches, so Dave, a dedicated Harley-Davidson fan, brought out his favorite T-shirt with the trademark eagle. Within 10 minutes the rep had sent a photo of the shirt to the company’s office in Elkhart, Indiana, and gotten back a completed custom design that the artist nicknamed “The Screaming Eagle.” The name stuck, and from that moment on, the Santiam was reborn.

Of course, the transformation did not happen overnight. Arrangements were made to ferry the motorhome to Indiana and stay with friends a few hours closer while the work was done. In addition to repainting, the Gilberts decided to use the camping downtime to have their manual awning replaced with an automated one. The work was completed in just under four weeks, and the finished product has been declared nothing short of amazing by everyone who sees it.

So what is the price tag for a Cinderella story like this one? With all of its updates and modifications, the Gilberts have spent an additional $30,000 above their initial $70,000 investment. This includes $15,000 for the new paint, a cost that included all of the prep work as well as some minor delamination repair. The total invested still adds up to only half the motorhome’s original 2003 selling price, making it an affordable alternative to a new unit without giving up comfort or performance. Even more important, this reimagined Beaver Santiam has its own unique style, and that is why it earns the distinction of being called a classic ride.

Do you, or someone you know, have a classic motorhome that you’d like to see featured in MotorHome magazine? If so, email Ann Eichenmuller at [email protected] with your suggestion and a brief description. Please include “The Classic Ride” in your subject line.