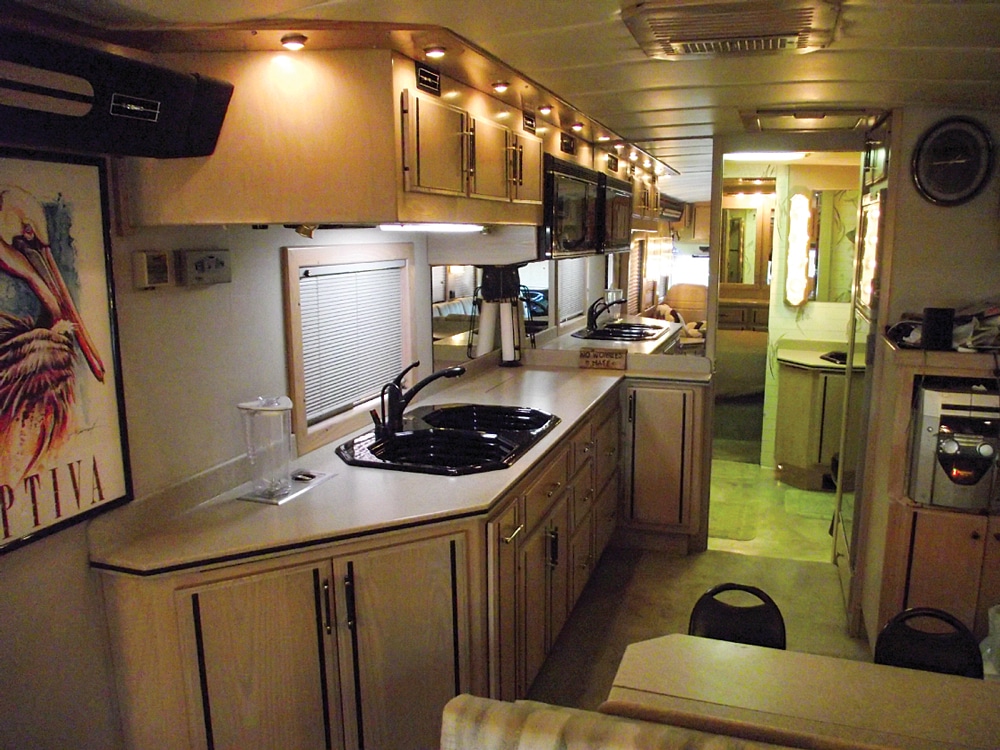 Equipped with nearly everything the owner could hope for, this iconic coach continues to shine

This article is the second in a series looking at motorhomes that have stood the test of time. They may have miles under their wheels, but they can still make dreams come true. Each has earned the right to be called “the classic ride.”

What do former President Jimmy Carter, Johnny Cash and King Hussein of Jordan have in common with Darrell Beaton, a retired pipefitter from Michigan? All have been the proud owners of a Blue Bird Wanderlodge. This iconic Class A motorhome has been a favorite of the rich and famous from its inception in the 1960s until its last production in 2009, competing in the luxury motorhome market against brands such as Marathon and Newell. Perhaps because of its timeless design and its celebrity appeal, owners have been slow to part with these Blue Birds, making them a sought-after commodity in the preowned motorhome market.

“It took me three years to find mine, looking on the internet every day,” Beaton says, with the air of a man who still can’t believe his good luck.

When we first saw Beaton’s 40-foot 1991 Wanderlodge at a campground in Georgia, we assumed it had been freshly painted. We were surprised to find that everything – from the exterior paint to the pristine penthouselike interior – was completely original. Beaton picked up this collector’s classic in 2013, with only 80,000 miles on the 450-horsepower turbocharged Detroit Diesel engine, for the incredible price of $50,000. Lucky, indeed.

The galley features solid-surface countertops complete with a built-in blender.

There is no way to overstate the quality workmanship that went into the making of the Wanderlodge. Blue Bird was the fourth-largest manufacturer of school buses in the United States before its entrance into the motorhome market. This background in heavy-duty steel construction is one key to the Wanderlodge’s success. With a 20-gauge steel roof; 14-gauge steel floor, roof bows, headers and stringers; and 16-gauge steel side panels, this motorhome is nearly indestructible. In the rare case that anything should need repair, most of the Wander­lodge’s parts are shared by Blue Bird’s bus fleet, so they are relatively inexpensive and readily available.

But while it may be built like a bus, the Wanderlodge certainly does not look like one. Its interior rivals any new-production motorhome. When Beaton’s unit was built, more than 200 options were available, including floorplan choices, wood cabinetry, flooring, lighting and counters, so his Blue Bird has a distinctive, custom look. The cockpit includes cream leather, power seats and an instrument panel that so closely resembles an airplane that, as a pilot, I felt right at home. One drawback for some RV buyers might be the lack of slideouts, but the layout of this coach makes such optimal use of every one of its 102 inches of width that this was barely noticeable. The Swedish-modern dÃ©cor, evoked by the white-birch woodwork with an ebony inlay and recessed lighting, gives the impression of space, as does the open floorplan that centers on a large, L-shaped sofa surround. The galley is spacious and uncluttered, featuring bar seating, an ivory solid-surface Corian countertop with a double sink and built-in blender, a two-burner LP-gas stove, convection microwave and a large Dometic refrigerator.

The bedroom on this model is located in the rear and is accessed through the unit’s single large bathroom. This includes a spacious heated-tile shower with glass doors and a solid-surface vanity, and it is separated from both the kitchen/dining area and the bedroom with heavy solid-wood sliding doors. The bedroom includes a queen-size bed, end tables and a wall of drawers, shelves and closets for storage, in addition to a built-in safe. There is even a protection system that can be activated from the bedroom, allowing the owner to turn on exterior lights around the motorhome as well as sound an alarm. 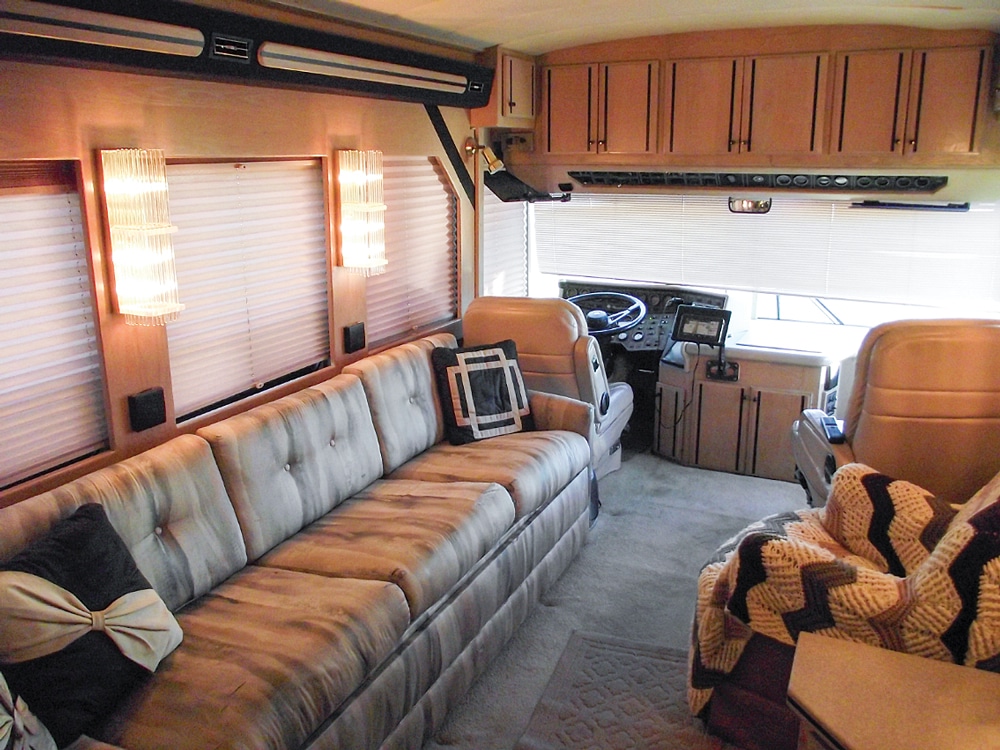 The large L-shaped sofa offers a feeling of spaciousness.

The Wanderlodge isn’t just pretty; it’s also well-equipped. Redundancy is key to Blue Bird’s design. There are dual 160-amp Delco alternators, dual-system independent air brakes and even dual heating systems – an LP-gas hydronic system, which includes a heat exchanger and electric forced air. The heated basement, which has auto-locks on all compartment doors, includes a secondary refrigerator and a freezer. The Wander­lodge is also equipped with eight house batteries and a 15-kW Kubota AC generator. Finally, for ease in setup, the unit has auto-leveling jacks and a backup camera with microphone.

Beaton, a veteran RVer who has owned seven other Class A’s over 30-plus years, has yet to find something about this coach that he doesn’t like. “With all of my other motorhomes, I had a wish list, things I wanted to change. With the Wanderlodge, there’s nothing.” 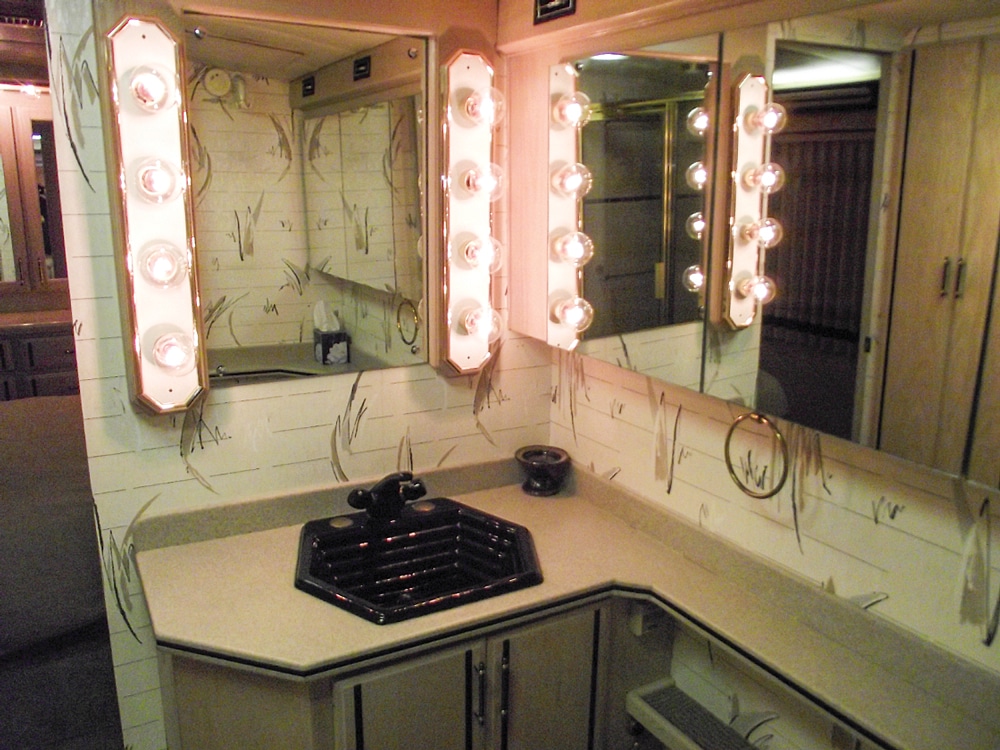 This is not to say that the motorhome does not need a few minor updates. One feature he liked was that the TV rose remotely from within the center console in the cockpit; unfortunately, it was still the original, old-fashioned tube type. He has since removed it and is in the process of refitting the space with a new flat-screen TV. The sound system is also scheduled for an update. And while the wall-to-wall carpet is still in good condition, he would like to replace it with a light hardwood flooring.

“That would be better for Georgia Brown,” he says, referring to his traveling companion, a chocolate Labrador retriever.

As impressed as I was with the Wanderlodge, I had to wonder how it handled on the road. We all remember the bumpy ride of our elementary school bus; with all of its refinements, was this Blue Bird any different?

Beaton laughed. “You won’t believe this, but it floats. It has air suspension, 10 air bags – you can’t feel a thing.”

He added that the Wanderlodge basically drives itself, and went on to note that, with a dry weight of more than 40,000 pounds, even passing semitrailers has no effect. At the same time, he has been pleased with the unit’s acceleration. Recently retired, Beaton has made the trip between Florida and Michigan twice since purchasing the motorhome, doing some sightseeing in the mountains en route. He found that the Wanderlodge has plenty of power in all types of terrain, and that it tows his Jeep effortlessly.

It is easy to see why Beaton feels that the Wanderlodge was worth the wait.

“I used to be like other RV owners, always talking about my next motorhome,” he said. “Not anymore. I’ll have this one until I die. There is just nothing to upgrade to.”

A design that needs no improvement – this is what makes the Blue Bird Wanderlodge a classic ride.

Do you, or someone you know, have a classic motorhome that you’d like to see featured in MotorHome magazine? If so, email Ann Eichenmuller with your suggestion and a brief description. Please include “The Classic Ride” in your subject line.