Fall Creek Falls State Park in southeastern Tennessee stretches across more than 26,000 acres of some of the most dramatic landscape you can imagine. Poised atop the Cumberland Plateau — the longest such forested plateau in the world, spanning eastern Tennessee all the way from Alabama to Kentucky — the park is a study in rare geology. And for breathtaking scenery, it doesn’t get any better.

Among the wonders is Cane Creek Gorge, a massive, thickly treed limestone cleft that bores some 800 feet into the earth and extends nearly 8 miles. Picturesque, fast-flowing streams feed into Cane Creek at the base of the gorge, bubbling over and around pebble-studded boulders shaped like giant turtles. The streams wind past stands of some of the country’s last remaining virgin forest — trees that, remarkably, have never been touched by ax or chainsaw. And, of course, there are the namesake falls, plus five others that are nearly as grand. 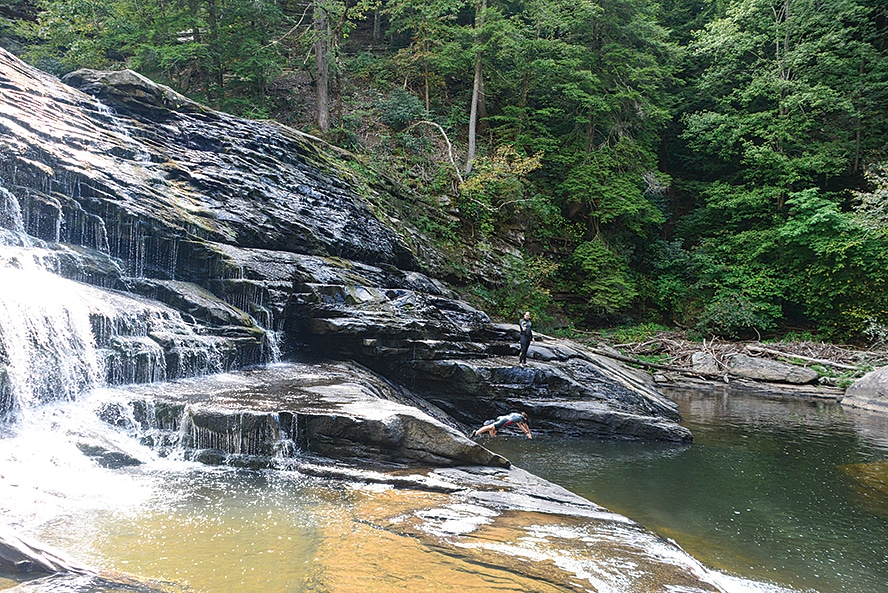 A view of the falls from the base can be accessed via the Cable Trail, a steep and rocky path lined with cables that descends into the gorge at a 45-degree angle.

Fall Creek Falls, even though its drop is below the rim of the gorge, plunges a mighty 265 feet into a deep, tannin-black pool. Numerous overlooks along the rim, some fenced for safety, some not, provide stunning views of the falls, which from the distant vantage could be long strands of crimped white hair extending into shafts of light. According to Tom Solomon, head of resources management and program services for the park, these are the highest “plunge” falls east of the Rockies. And while the volume of water may be far less than Niagara’s, the drop starts almost 100 feet higher.

Above the falls, a dam has harnessed Fall Creek into shimmering-silver 365-acre Fall Creek Lake. Solomon notes that the amount of water going over the falls can be controlled from here. He adds that all “surface water” in the park eventually flows into Cane Creek, the stream, which, aided by long-ago glaciers and geologic uplift, has helped shape and carve this rugged landscape. He says it’s a process that has been going on for somewhere around 350 million years.

The park’s other waterfalls include 95-foot-high Piney Creek Falls, 125-foot Rockhouse Falls and 250-foot Coon Creek Falls. There is also Cane Creek Cascades, a wild sweep of water that thunders over a 45-foot-high rocky stair-step, splashes into a wide pool (on a hot day you may see swimmers here), then races along a rock-strewn course to drop over 85-foot Cane Creek Falls into a deeper pool.

A nature center stands high on the bluff overlooking the cascades. It includes a small museum with a bookstore, a gift shop and a variety of exhibits with dozens of mounted native birds, mammals and reptiles, and a wall of historical photos entitled “Life in the Cumberlands,” featuring the handful of Scots-Irish pioneers who settled the area in the early 20th century. Other walls hold paintings by Civil War artist Gilbert Gaul, who once lived here. There’s also a 15-minute video that tells the story of the land and the park.

In 1937 the federal government began buying up eroded land around Fall Creek Falls from locals to develop a park, the video explains. Over the next few years, the Works Progress Administration and Civilian Conservation Corps restored the forest and built trails, bridges and other facilities. Then in 1944, the government deeded the park to Tennessee. It’s the largest and now the most popular of the state’s 56 state parks, drawing more than 2 million visitors a year.

Much of the land has been preserved in its natural state, and a number of old farms that were merged into parkland have been allowed to reforest naturally, while other large fields have been planted with pines. 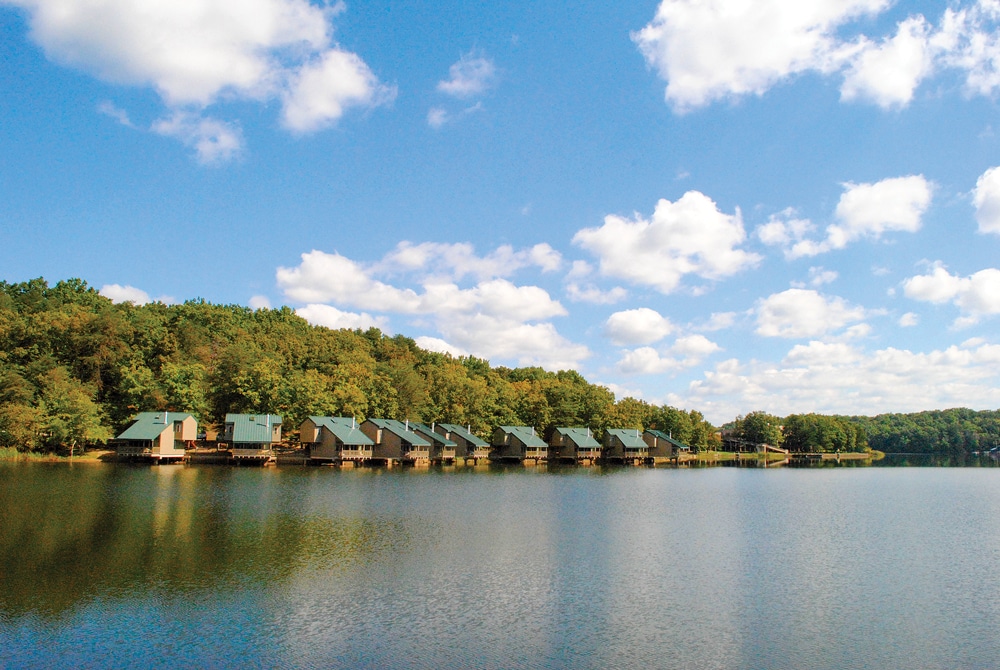 Behind the nature center are two footpaths. To the right is a trail to the long, steep wooden stairway leading to the base of the cascades and its pool. To the left, a path leads to Woodland Trail via a 150-foot-long swinging bridge (featured in the 1994 movie The Jungle Book) that crosses over the cascades. Only six people are allowed on at a time, but even with two or three, the bridge sways and shakes alarmingly; if you can, go alone. (After walking it ourselves, we watched in amazement as a blind man, his hand on his wife’s shoulder, followed her across.) The trail continues for nearly a mile to the dramatic Fall Creek Falls Overlook.

Eight other hiking trails ranging in length from the .2-mile Campground Trail to the 4.45-mile Gilbert Gaul Loop wind through the park’s forested acres, past rock-studded streams and along the gorge, offering long views across tier upon tier of distant mountains, lushly green fading to smoke-blue at the horizon, and stunning waterfall vistas. The trails also range in degree of difficulty, from near-level to steep and bulging with rocks and tree roots — and even involving a little not-too-strenuous rock climbing. There are also a half-dozen bike paths and a couple of longer overnight hiking trails.

Guy and I hiked a number of the trails and included our dogs on two of them, the Piney Falls Side Trails, each ¼-mile long. From the parking area, the trail to the right is a steep, rugged descent to the Piney Falls Overlook. You’ll want to sit awhile on the shelflike rock to savor the view. The trail to the left also goes steeply and ruggedly downhill to the 180-foot swinging bridge over Piney Creek. Our dogs loved the walk but hated the wildly swaying bridge.

Fortunately for visitors today, much of the gorge is virgin forest, saved from logging years ago by its inaccessibility. Oaks, hickories, yellow poplars, hemlocks and towering pines grow thickly, many of them upward of 100 feet tall. Most amazing, though, are the ubiquitous rhododendrons — not the 3-foot-tall dwarfs that resist growing a few hundred miles farther west because the soil’s not right (oh, how my father tried), but bona-fide trees with loopy trunks as thick as stovepipes and jade-green leaves the size of footballs. In May and June these elegant plants erupt in showy blooms like clouds of pink chalk (though even in fall, the time of our visit, the plants are lovely, flaunting bronze-hued leaves among the green).

Hiking the 34-plus miles of trails may be a main activity here, but the park offers lots more — such as boating on Fall Creek Lake (kayaks, canoes and paddleboats can be rented, or bring your own), fishing for largemouth bass, channel catfish and bluegill (flat-bottom boat rentals are also available), golfing on the 18-hole championship course, horseback riding (with guided trail rides), tennis and a newly renovated Olympic-size swimming pool scheduled to be open Memorial Day to Labor Day.

The park also includes ZipStream, an aerial-adventure course with zip-lines and more than 70 “suspended obstacles” that is open on weekends. There’s a general store and Gaul’s Gallery Restaurant, which serves Southern-style buffet cuisine and can seat 220 diners. A 300-seat amphitheater, also newly renovated, presents special programs. The park truly offers something for everyone.