Take Me Out to the Ball-Game 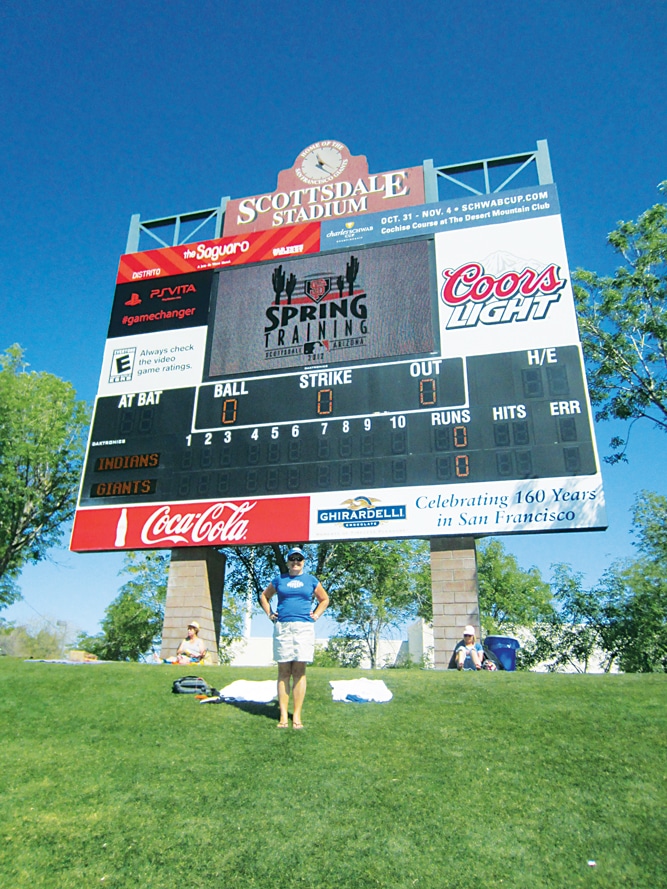 If you could ask your motorhome where it would like to go this spring, it just might reply, “Take Me Out to the Ballgame!” That is, to Major League Baseball’s (MLB) spring training camps, which are located in Florida and Arizona. A leisurely trip to the warm spring weather of either of these two Sunbelt regions might be just what the doctor ordered.
If you’re not a diehard baseball fan, you might be wondering why you would want to take a trip to see spring training. I’ll admit I’m not a baseball fanatic – it’s Cheryl who carries that title in our family – but I am an adventurous RVer and I can tell you that a visit to spring training offers outstanding camping, RV tailgating, sightseeing and other activities to keep everyone satisfied.
Spring training plays an important role in MLB and dates back to the 1880s. Originally, teams were spread across the United States with no rhyme or reason; however, following World War II, spring training camps were slowly consolidated into just two locations, the Grapefruit League in Florida and the Cactus League in Arizona. More recently, the league’s 30 professional teams were evenly distributed to facilitate improved scheduling.
The fan portion of spring training begins in late February and runs until the end of March, with multiple games and teams playing just about every day of the week. The weather in Arizona normally alternates between a cool 70 degrees to a warm 85 degrees, with plenty of fresh air and sunshine. You should anticipate slightly warmer weather and humidity in Florida.

Cheryl DeNoi staking out her spot on the lawn at Scottsdale Stadium for a Cactus League game.

The Grapefruit League will play more than 200 games in 13 fan-friendly and RV accessible stadiums across central Florida. The ballparks are situated along both coasts, from Dunedin to Fort Myers on the west coast and Lake Buena Vista to Jupiter on the east coast.
Ever since American industrialist Henry Morison Flagger started developing Florida’s first improved roads and railroads in the late 19th century, the Sunshine State has been a major tourist destination. Your spring training vacation experience can be enhanced with some additional planning and visits to the state’s many tourist websites. After all, where else can you watch a baseball game one day and see a live underwater mermaid show the next day?
The Cactus League’s 11 spring training ballparks are conveniently distributed in seven centrally located cities in the greater Phoenix metropolitan area. Spring training ballparks are much smaller than their Major League stadium counterparts and have a fan-based, laidback atmosphere with plenty of activities for visitors of all ages.
As with our family, spring training is an annual occurrence for many of its tens of thousands of fans and therefore some advance planning may be in order as far as campgrounds and other lodging accommodations are concerned. However, with a little persistence, latecomers should be able to obtain good game tickets and RV accommodations, and enjoy a variety of other activities in between games. Online ticket sales start around $7 for lawn seating and run as high as $35 and up for premier seating and high-demand games.

Los Angeles Dodgers warming up prior to a spring training game.

One of the biggest benefits of spring training is the RV friendly attitude throughout the stadiums, all providing outstanding car and RV tailgating opportunities with parking fees ranging from $10 to $25. Most ballparks have designated parking for tailgating fans that vary from hard pack ground and gravel lots to fully paved parking areas with lush green grass. Families and friends routinely put together sandlot-type baseball games right in front of their RVs; before, during and after the Major League baseball games they came to watch.
Many spring training RVers choose to camp light at their RV parks so they can quickly pack up each morning and drive their rigs to the ballpark for the day. Fans can begin arriving at the ballparks as early as two hours before the start of the games. Rigs traveling together can sometimes set up their “camps” side-by-side or other desired configurations and start the party or just relax under their awnings. The park’s grounds and stadiums also open early so fans can buy food, drinks and souvenirs. More importantly, they can observe their favorite players participating in activities such as batting practice, grass drills and practice games.

Authors Dennis and Cheryl DeNoi in the owner’s box at Camelback Ranch-Glendale, home of the Los Angeles Dodgers.

Spring training is the closest you may ever come to what Kevin Costner’s character Ray Kinsella experienced in the classic 1989 movie Field of Dreams. That’s because at most every turn there are opportunities for chance encounters and autographs with up-and-coming stars as well as big league heroes. The old-school fans are always on the lookout for the legendary players of the past who often serve as temporary consultants during spring training games. Foul balls are another favorite among fans of all ages, and there is no limit to the number of balls an eager fan can snag, get autographed and take home.
Each Major League team goes all out to make their park the fan favorite and wants all guests, theirs and the visiting team’s fans, to feel at home. Most seats are so close to the action on the field that you can not only hear the interaction from player to player and their managers, but you can actually carry on conversations with players waiting in the on-deck circle, those in the outfield, and even with players and coaches in the dugouts.
During the past five years, we have visited 10 Cactus League and five Grapefruit League ballparks. All of the parks have special features, but our two favorites are in the Cactus League. The first, Camelback Ranch-Glendale Stadium in Phoenix, Ariz., is one of the newer best complexes in the league. The Los Angeles Dodgers and the Chicago White Sox share this 141-acre baseball paradise and alternate home games. Besides having the finest RV tailgating accommodations that we have found, the 10,500-seat campus is laid out around a 1,300-foot lake and its desert-friendly design is reminiscent of Frank Lloyd Wright’s architectural genius. Besides the main stadium, there are several accessible practice fields, workout areas and an impressive batting practice cage. The food and beverage concessions vary from traditional ballpark eats to local gourmet favorites and tend to be more affordable than their regular-season counterparts. When deciding on seating, don’t count out the cheap seats or the lawn areas, as they can be just as enjoyable, more relaxing and allow for easier access; kids love the lawn area, too.

Tailgating at Surprise Stadium, the spring training home for the Kansas City Royals and the Texas Rangers.

The Los Angeles Angels of Anaheim’s Diablo Stadium is another of our favorites. It was built in 1968, and although it’s older, it received a major renovation in 2005 and maintains a neat, well-groomed appearance. The Angels and Diablo Stadium are steeped in history as Gene Autry, “The Singing Cowboy” owned the team for many years. The playing field still carries his iconic name. Diablo is conveniently located in Tempe, Ariz., and offers amenities such as free trolley service to and from the games and outstanding food concessions. Its RV parking/tailgating area is generally unrestricted and there are plenty of opportunities for early arrivals to stake out their favorite parking spot. Fans are so close to the action that it’s common for practice and game balls to come rolling past your motorhome; we have never heard of any broken windshields, but would take this situation into account when staging your rig.
When it comes to selecting accommodations, one of the biggest considerations is proximity to your favorite teams and stadiums, especially in Florida were the ballparks are situated on either coast. In Arizona, the greater Phoenix area has an extensive freeway system so no RV park is too far from a ballpark, and less time on the road means more time at the ballpark. There are numerous RV parks and campgrounds associated with both spring training regions. Several carry all 9’s and 10’s on the Good Sam Rating system and are listed in the new Good Sam RV Travel Guide & Campground Directory. There are also several helpful websites that can help make even a first-time visitor look like a spring training pro when it comes to selecting a campground, buying game tickets, and locating entertainment and dining options.
We encourage you to dig out your old baseball glove, knock the winter dirt off of your faithful coach, grab a few friends and family, and head to the spring training region of your choice. Soon, you too will be singing, “I don’t care if I never get back!”