Take It Outside with an Outdoor Kitchen 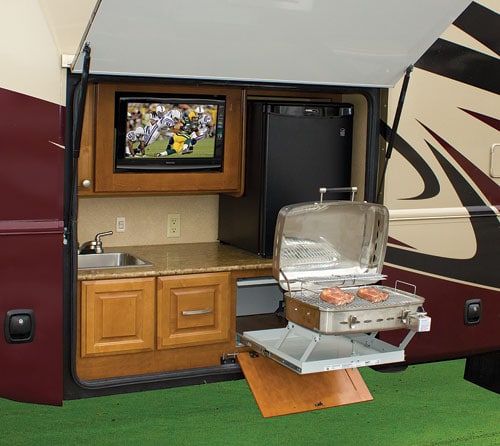 RVers who want to enjoy the pleasure of alfresco dining these days no longer have to dig out the grill or traipse inside to clean up afterward. Among the most prevalent of the new trends from towable RV manufacturers is outdoor kitchens. Some are simple in concept while others are equipped with features that rival a traditional kitchen.

“You spend a lot of time outside, going back and forth inside to the kitchen to get silverware or wash your hands,” said Ryan Juday, a Keystone RV general manager. Keystone now offers outdoor kitchens in a wide array of models. “Outdoor kitchens are just convenient to have with everything out there by the campfire.”

A trend within a trend is that while many kitchens are designed into bunk-bed floorplans (such as the Cruiser RV we tested), they’re also increasingly popular in so-called “couples coaches,” which are growing

Most manufacturers keep the same kitchen — or a close facsimile — throughout their lineup. Typically, the outdoor galleys feature a sink, two-burner range, small refrigerator, cabinets and drawers and countertop space. Some builders add LP-gas grills that swing out from the rear of the unit as well as microwaves, TVs and entertainment centers.

“We have one Tracer travel-trailer floorplan where we do a shrunken-down version, but other than that, they are all the exact same in all of our floorplans,” said Jeff Rank, president of Forest River’s Prime Time Manufacturing.

Prime Time considered outdoor kitchens so important that the company included one in the first travel-trailer line it introduced back in 2009. “I knew it was going to be something important,” Rank said.

Evergreen RV carries its green concept into the aluminum-and-stainless-steel kitchens it offers in five environmentally friendly Ever-Lite travel trailer floorplans. “There is no wood on the outside,” says Evergreen President Doug Lantz. “We designed it to be waterproof.”

At the higher end, KZ offers an optional Bistro Package consisting of an icemaker, TV, entertainment center and infrared electric grill as an option in its 37-foot quad-slide StoneRidge fifth-wheel. When speaking of the higher-end buyers, KZ Vice President of Sales and Marketing Andy Baer said, “Those people take things to a different degree.”

While KZ’s kitchen appeals to the luxury buyer, others are designed to be more basic.

A simple one-piece stainless-steel Cook Center equipped with a small sink and a two-burner stove that slides out in a drawer from beneath the galley are standard on most of Open Range’s Roma and Mesa Ridge travel trailers, though the concept is continually evolving. “We will be coming out with a couple of models with full-blown kitchens with a fridge and microwave,” said Open Range President Randy Graber. “The market is demanding it.”

There’s nothing simple about the design of the outdoor kitchens in the Tango/Panther travel trailers. Pacific Coachworks configures these kitchens in a patented vertical slideout that extends from the rear side wall. “It’s a secondary kitchen, but it’s got enough features to keep you outside having fun and enjoying the wilderness and people,” said Pacific Coachworks President Brett Bashaw.

While most manufacturers keep the same kitchen across their lineups, each one manufactured by Coachmen is a little different. Its travel trailers and fifth-wheels “are tailored for the market segment and the buyer,” said Coachmen President Michael Terlep. “Our goal is to provide buyers with the means to be outside with their RV, whether it’s tailgating or at the campground. Folks who are committed to the RV lifestyle want to be outside.”

Forest River’s new Shasta Division has designed outdoor kitchens in two 30- and 32-foot floorplans in Revere and Freeport travel trailers. “When outside kitchens first were introduced, there was a question of whether they were just a fad or a trend with staying power,” said Shasta President Brad Whitehead.

It certainly looks as though they are here to stay.