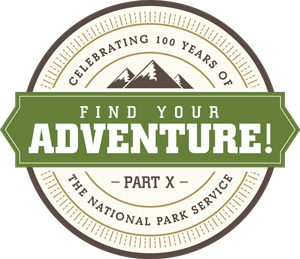 The National Park Service’s 100th birthday celebration may be winding down, but here on the pages of MotorHome magazine, the party’s far from over. Which means our monthly Find Your Adventure series continues as we head for warmer climes to seek out some of the wide variety of adventures – from mild to wild – that are just waiting to be had in the 400-plus units under the protection of the National Park Service.

Whatever mental images the phrase “a day at the beach” conjures up, chances are good that the 120,000 acres of sparkling white sand and brilliant turquoise-colored water known as Gulf Islands National Seashore will confound and contradict them.

That’s because this lovely yet ever-changing unit of the National Park Service (NPS), stretched out along 160 miles of Gulf of Mexico coastline, protects some of the last undeveloped stretches of oceanfront property in Florida and Mississippi. No small accomplishment in two states where so much of the natural coastal environment has been lost to vacation condos and T-shirt shops. 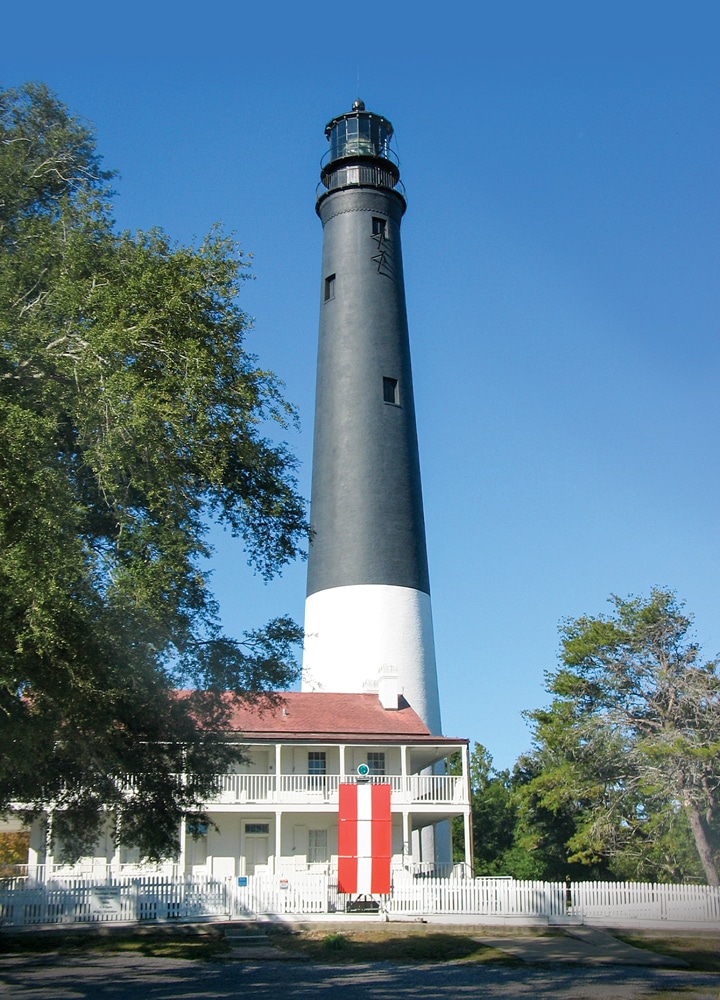 Look a little closer, however, and you’ll find the park’s real beauty goes much deeper than its sunny days and sandy beaches.

The islands that give the park its name run from just east of Pensacola, Florida, to the Mississippi resort town of Gulfport (some islands between these two sections are part of Alabama’s state park system). Together they make up the largest of the 10 national seashores under the NPS’s watch.

The number of annual visitors – almost 4 million at last count, or about the same as Yellowstone – gives some indication of the park’s popularity. And yet, Gulf Islands National Seashore itself still manages to retain an unspoiled feel that so many beach destinations lost decades ago.

The main focus here, of course, are the low barrier islands themselves, their dunes held in place by waving bunches of sea oats and their interiors dotted with scraggly pine forests.

But, if it’s a jumpin’ beach scene you’re after, this is not it. Given the fact that only one of these narrow spits of sand – West Ship Island – is accessible by public ferry (228-864-1014, www.msshipisland.com), the chances are better than average that you can find a long stretch of deserted beach to call your own. 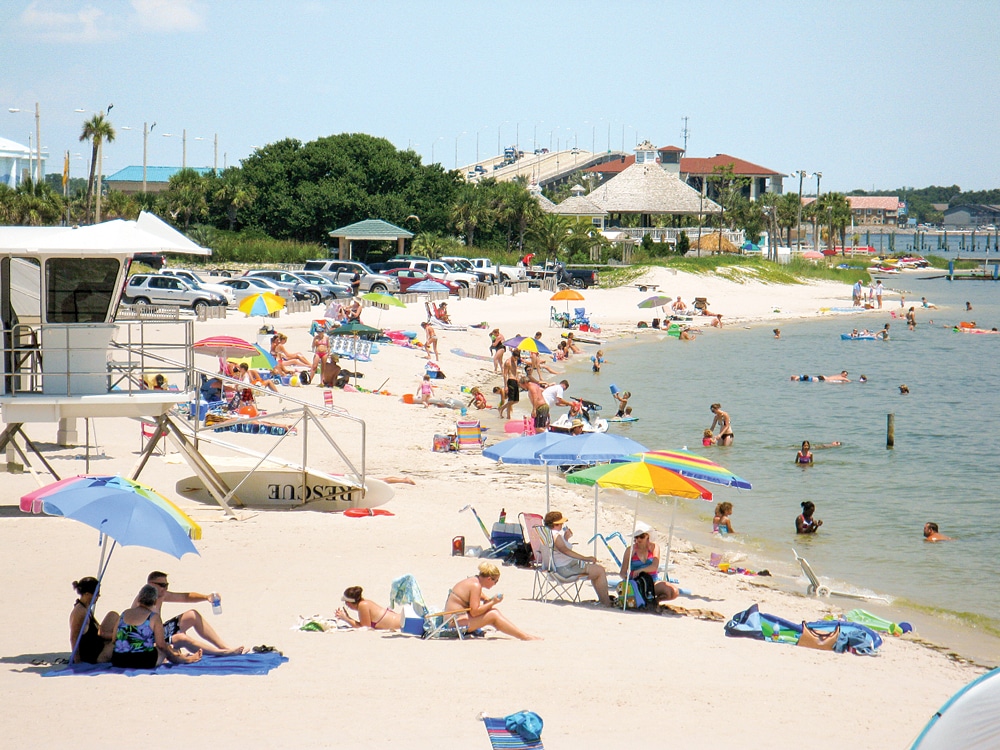 Beaches in the area can fill up quickly, especially during the summer months. The beaches are especially popular due to their gentle waves; clear, shallow waters; and sugar-white sand.
Photo: Visit Pensacola Inc.

That said, don’t make the mistake of assuming the islands are the only place to find this increasingly rare quality. Those looking for a break from all of that sun and sand, for example, will find mainland attractions like Mississippi’s Davis Bayou, with its coastal forests, bayou boardwalks, bird-watching and fishing pier, to be equally peaceful.

In addition to this natural history, the Gulf Islands National Seashore also has its share of fascinating human relics, including a number of historic forts that await your inspection. These include everything from the Spanish-built Bateria de San Antonio that dates back to the American Revolutionary War, to Fort Pickens, which was the only Southern fort held by the Union Army throughout the Civil War and which last saw service in World War II.

By all means, the adventurous should start with exploring the islands. Some, like Santa Rosa and West Ship Island, are relatively easy to visit because of bridges to the mainland and that seasonal ferry service, respectively.

Others require a little more effort to get to, but offer a potentially bigger payoff. To get to Petit Bois, Horn Island and Cat Island, for example, you’ll need to arrange for an authorized water taxi shuttle service like the ones listed on the park’s website (www.nps.gov/guis/planyourvisit/boat-charters-in-mississippi.htm).

Once you come ashore, you have a number of entertaining options. Besides simply kicking back and working on your tan, you can swim and snorkel to your heart’s content. You can also amble along through the gentle surf in what has been described as one of the country’s best beachcombing spots. Plan your arrival for the hours around low tide – especially after a storm – and you may be surprised what you’ll find staring back up at you from the receding waves (you can collect seashells as long as they don’t have living creatures in them). 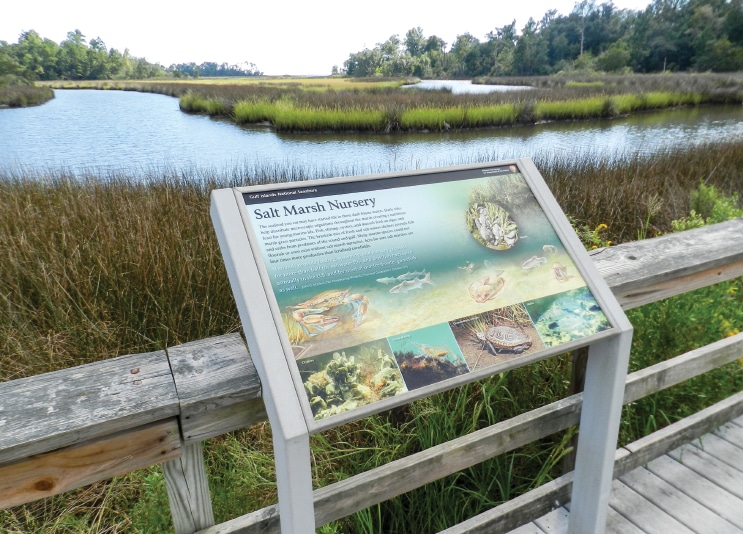 Visitors to the Davis Bayou can learn about the area through informative plaques along the eponymous trail.
Photo: Jeff Wilkinson; Visit Mississippi Gulf Coast

One of the little-heralded joys of Gulf Islands National Seashore is the chance to see wildlife in its element, like the bottlenose dolphins that often play in the wake of charter fishing boats and the West Ship Island ferry. A more elusive but no less exciting sighting is the sea turtles that crawl up onto the sand to lay their eggs on area beaches from spring through early fall. If you’re really fortunate you might witness hatchlings from one of these four sea turtle species – loggerhead, green, Kemp’s ridley and leatherback – as they emerge from the nest and scamper their way toward the ocean.

If bird-watching’s your thing, be sure to bring your binoculars and field guides. This is a prime stopover and nesting ground for more than 280 winged species, offering the chance to add everything from a common osprey to the endangered snowy plover to your life list. Migration patterns mean the best bird-spotting usually occurs in spring and fall. 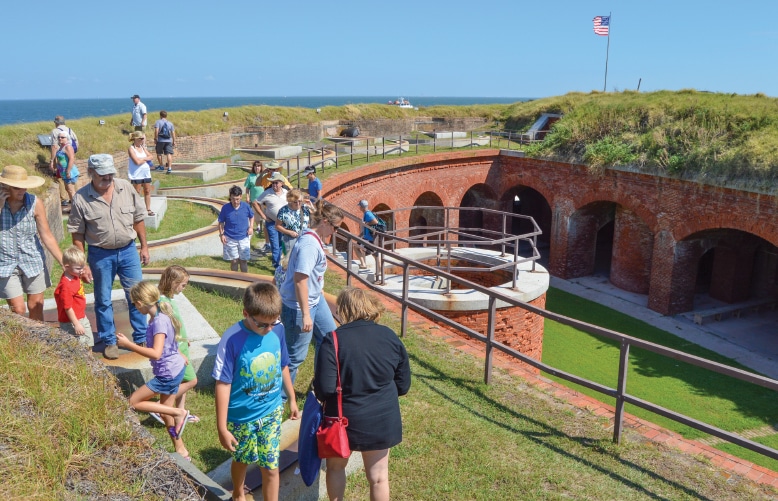 The Gulf Islands National Seashore also has its share of attractions back on the mainland. For starters, you can get your daily workout climbing the 177 steps to the top of the Pensacola Lighthouse and Museum, whereupon you’ll be greeted with sweeping views from the top of the tallest beacon along the Gulf Coast.

With all this water around, it figures there’s also some good fishing to be had. Daily charters head out into the Gulf in pursuit of game fish, from sharks to red snapper. Closer to shore, you’ll find a number of other fishing guides ready to show you their favorite spots along inland waterways for the best in flats fishing.

Aviation buffs will want to visit the National Naval Aviation Museum, where you’ll find more than 150 planes and thousands of smaller artifacts, plus flight simulators and an IMAX movie. This is also the home of the U.S. Navy’s Blue Angels flight demonstration team, which you can often watch practicing on most Tuesday and Wednesday mornings from March through November. As of press time, the flight line was not open to the public, so be sure to check www.naval aviationmuseum.org before your visit.

In the final measure, a visit to Gulf Islands National Seashore may seem like just another day at the beach. But while you have your sunny days and sandy shores, what really sets it apart is the one thing that’s hard to come by in your typical beach scene – a true sense of solitude. 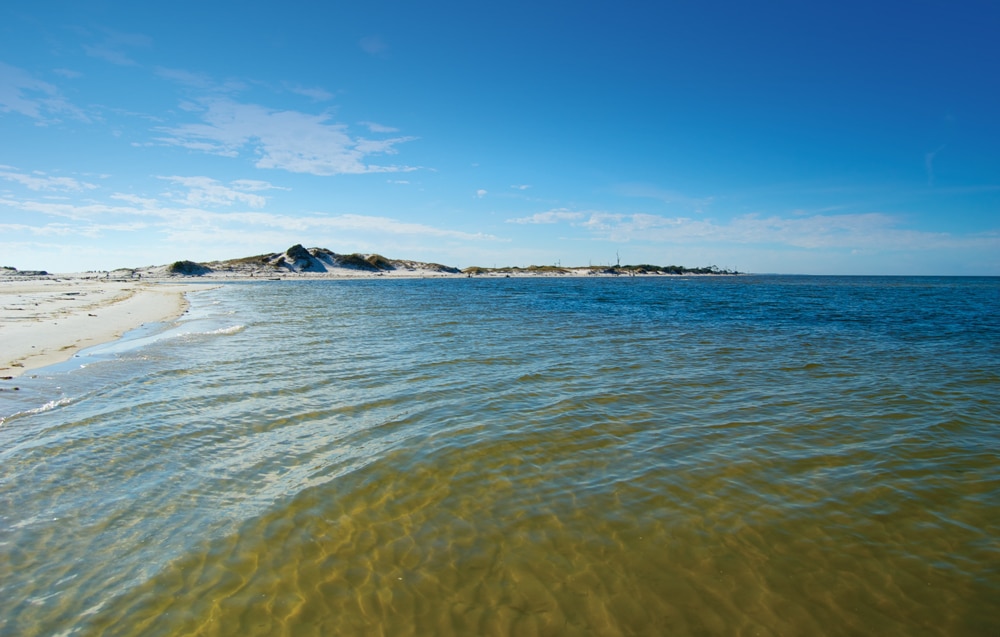 Horn Island is an undeveloped barrier island that has been designated a wilderness zone, which makes it a great place for wildlife viewing and bird-watching.
Photo: danstefoutdoors.com, Visit Florida, Visit Pensacola Inc.

There are two developed campgrounds in the park, one in Florida and one in Mississippi.

Fort Pickens Campground on Santa Rosa Island near Pensacola, Florida, has 180 campsites with water and electric hookups that can accommodate RVs up to 50 feet in length. A dump station is onsite. Keep in mind the road to the campground can flood at any time, forcing the closure of the road and campground; call 850-934-2656 for the latest information.

Davis Bayou Campground near Ocean Springs, Mississippi, has 52 sites with water and electric hookups that can accept RVs up to 45 feet in length. A dump station is onsite.

The surrounding cities of Gulfport/Biloxi, Mississippi and Pensacola, Florida, also have a number of commercial RV parks from which to choose.