Splendor in the Sands: Desert Vacations

Off the beaten path in southern New Mexico, the alabaster slopes of the world’s largest gypsum dune field crown a beautiful and surreal landscape

I’ve always had a yen to go to White Sands National Monument, but during our travels, it has invariably been too many miles off our driving route. Finally, we were traveling east from Arizona and had a few days before we had to be at our destination in southern New Mexico. It was a perfect time for a stop at White Sands.
We stayed in the charming city of Las Cruces, and during our visit artists literally took to the closed-off streets to compete in a chalk-drawing competition. The resulting images were artistically done and extremely beautiful. Many local artists and merchants took part in the ongoing street fair, and shops displayed locally produced merchandise. 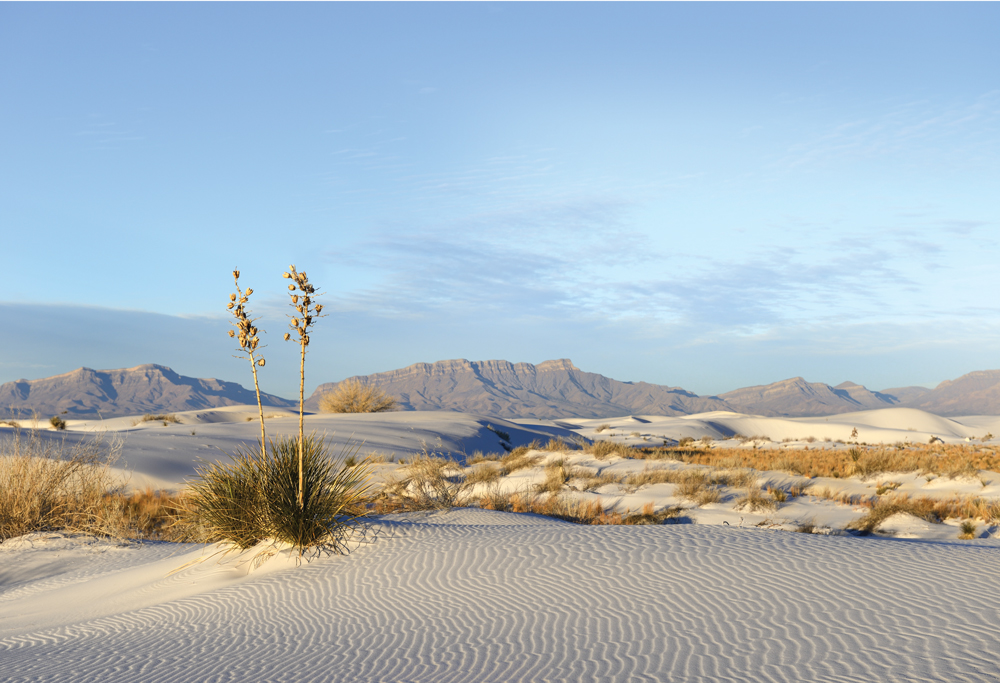 A side trip took us to nearby El Paso, Texas, where we drove the back roads and passed through acres and acres of pecan trees. The region is also known for wine production, and we stopped in at one winery for a taste test.
But the main reason we came was to visit White Sands. To understand why this national monument is so remarkable, we need to review a bit of geology. To begin with, the White Sands in its name is not sand at all but powdered gypsum that over the centuries has drifted from the surrounding mountains into tall dunes. Gypsum is an evaporate mineral, meaning that it forms almost exclusively when dissolved ions become concentrated due to the evaporation of water.
In fact, White Sands is the largest gypsum dune field in the world. I have traveled throughout the Southwest and seen desert sand in many forms, but the pure-white coloration we saw at White Sands is simply breathtaking. Because it is gypsum, it feels more like talcum powder than sand and retains its coolness, even in the heat of desert summers.

While several early attempts were made to bring this area into the national park system, it wasn’t until 1934 that White Sands actually opened, following a declaration by President Hoover. Facilities at the 143,000-acre monument were completed by the Works Projects Administration in 1938, and some are still in use today.

The monument resides at the northern end of the Chihuahuan Desert at the edge of the White Sands Missile Range, which earned its reputation before, during and after World War II as a testing location for the first nuclear weapons. The Trinity Site where the first atomic blast was done is in the north end of the missile range. Missile-borne armaments are still tested here, and portions of the monument are occasionally closed during testing. Adjacent to the monument is Holloman Air Force Base, and a few miles farther down the road is the city of Alamogordo.
It takes about 45 minutes to drive from Las Cruces to the visitor center at White Sands. We left Las Cruces and crossed over the San Andres Mountains into the peaceful and serene valley that contains the monument. It is estimated that the dunes have been there for between 7,000 and 10,000 years. As we drove across the desert, it was difficult to imagine how early civilizations survived throughout history. Mescalero Apaches occupied this region and continue to do so today. Hispanic pioneers began farming and ranching in the area in the 1860s, but the severe drought and Great Depression of the 1930s pretty much put an end to expanded settlement. In the 1940s, a large portion of this area was set aside for defense purposes.

As we turned into the visitor center, the stark, bright whiteness of the “sand” was striking. Unlike the tan and brownish sand in other parts of the Southwest, these gypsum grains maintain their color throughout the seasons. The visitor center, housed in a Spanish pueblo-adobe building constructed in the 1930s, offers not only a good orientation about the region’s geologic history but also an outline of how the park is laid out and the areas that are accessible to the public.
Park roads are limited, but they do take you to the various topographies of the dunes. At first, you will encounter small dunes and parabolic dunes (where strong winds have eroded a section of vegetated sand), while at the end of the drive you will see larger dunes with more prominent faces and sides. The drifting sand acts like drifting snow, and snow-removal equipment is used to keep the roads open.
The 8-mile Dunes Drive, which starts at the visitor center, has its first stop at Playa Trail. This short hike takes you into some of the frontal areas of the dunes. On this and other trails, various forms of cacti and yucca plants can be viewed. The elevated Interdune Boardwalk, 4½ miles from the visitor center, crosses over the sand and reveals plants and sand structures.
At almost every turn, a different set of sand structures begs to be explored, and several pull-offs lead to dunes to climb. It was quite an experience to hike to the top and look out upon a sea of gypsum sand that appears to be never-ending. We were fortunate that we chose a day where the wind was not high, but I can imagine what it would be like on gusty days.
At the end of the drive is a loop called Heart of the Sands with an amphitheater and an unusual picnic area. Each table has a curved roof that is positioned close to the ground to ward off airborne sand in high winds.
Photographers will appreciate the wonderful shapes and forms that the gypsum takes, but dealing with the stark-white background does provide a challenge. Like taking photographs in snow, the effects of the bright-white backgrounds, with the shadows and ripples in the sand, create some appealing results. Contrasting colors presented by the rocks and vegetation provide more photographic material. But in the end, the most awe-inspiring feature of this rare landscape is the vastness and changing nature of the white desert.

We took our time, stopping frequently to climb the dunes and revel in the natural beauty. After enjoying a picnic, we left the monument and took a 15-mile drive east to Alamogordo. One point of interest is the New Mexico Museum of Space History, a recommended stop. We were pleasantly surprised to view a history of the U.S. missile and space program, and review biographies of many of the principals responsible for various achievements in these fields. In addition to the exceptional museum, static displays of missiles and hard-ware can be seen on the grounds. Detailed explanations of the components helped in understanding how the missiles operate.
White Sands is a place of mystery and beauty. It is a living desert where more permanent features such as flora and rocks mix with the shifting white sands to create different moods at every turn. While we had seen images of White Sands in the past, nothing prepared us for the stark beauty of the bright gypsum and rolling dunes. It is one of the wonders of the world.

Where to Hang Your Hat

RV accommodations in southern New Mexico are many, depending on where you want to stay and which attractions you want to see. We stayed in Las Cruces because we had never seen that city and wanted to explore its culture and historic sites. From among the three Good Sam Parks in Las Cruces, we elected to stay at Hacienda RV and Rally Resort, which had all the amenities we needed. Hacienda is near the center of town and allowed easy access to major highways. We wanted to explore southern New Mexico down to El Paso, Texas, as well as take a trip to White Sands, and this location seemed to serve those needs best.
Traveling farther east, there are also a couple of Good Sam Parks in Alamogordo, which is much closer to White Sands National Monument. 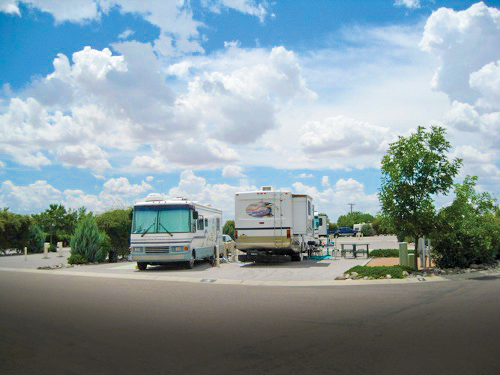