Splendor in the Ash

A century ago, nature unleashed its fury from Northern California’s Lassen Peak. Now the national park that surrounds the southern­most volcano in the Cascade Range is known for spectacular hikes, fascinating geology and bubbling hot springs

Peter Lassen was one of us. He explored new places, dressed casually, hiked incessantly, liked campfire cooking and even towed a vehicle of sorts. His had four legs, but it served the same purpose as a

camping trailer — hauling stuff. Lassen also shared a trait common to male members of our tribe; his sense of direction occasionally faltered. The Lassen Trail that he is famous for, promoted as a “shortcut” to the California Trail, was widely disparaged during his lifetime as being longer than necessary and unduly arduous. Lassen was murdered under mysterious circumstances in 1859, and some blamed disgruntled travelers who regretted following his lead. 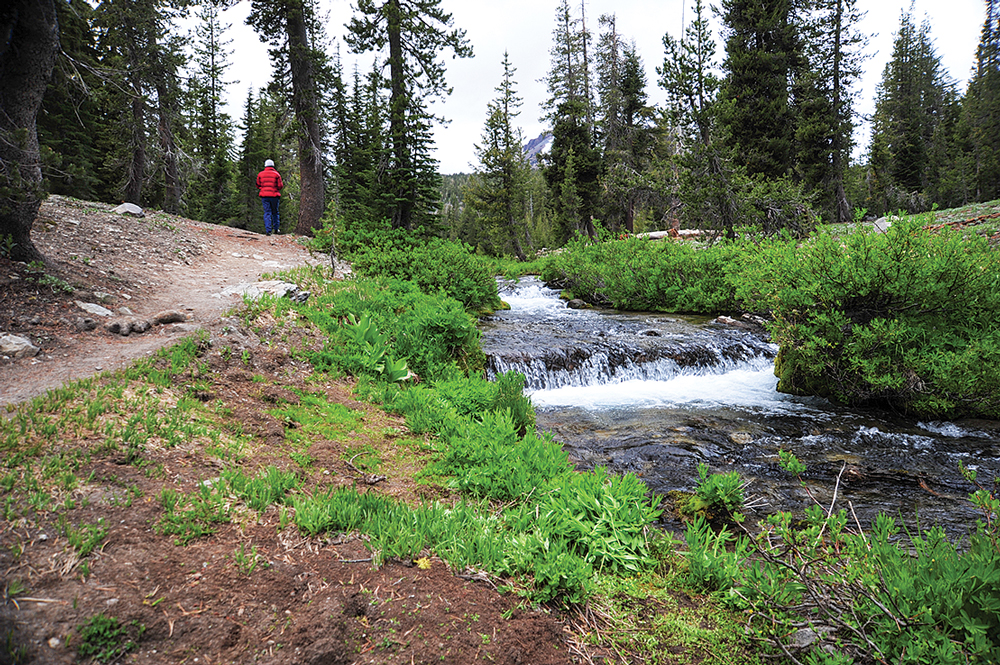 The park’s 150 miles of hiking trails include 17 miles of the famed Pacific Crest Trail, which stretches more than 2,600 miles from Canada to Mexico.

Named for the famed — or infamous — explorer, Lassen Volcanic National Park is a 106,000-acre expanse in Northern California between Redding on the west and Susanville on the east, about 230 miles northeast of San Francisco. The park’s namesake is a 10,457-foot plug-dome volcano that last erupted several times between 1914 and 1917. Still considered active, Mount Lassen could elect to shower ash throughout the region at any time.
If you’re a volcano kind of person, you can spend a great deal of time in this mountain range, visiting nearby Mount Shasta as well as Mount Hood in Oregon, and Mount Rainier and Mount St. Helens in Washington, the latter the only one to have erupted since Mount Lassen, in 1980. All are part of the Cascades, a string of volcanic and non-volcanic peaks that extends north into British Columbia.
Many of our national parks were established to preserve and protect a unique natural resource, and that is certainly the case here. This is one of the few places in the world where all four types of volcanoes can be found in one region. Lassen Peak is the plug-dome variety (formed from thick lava), and the surrounding lava fields are as impressive today as they were when the last eruption occurred. The park’s Prospect Peak is a shield volcano (formed from fluid lava), Mount Tehama is a composite volcano (formed from alternating layers of lava, ash and cinders) and Cinder Cone is, naturally, a cinder cone (formed from particles ejected from a single vent). 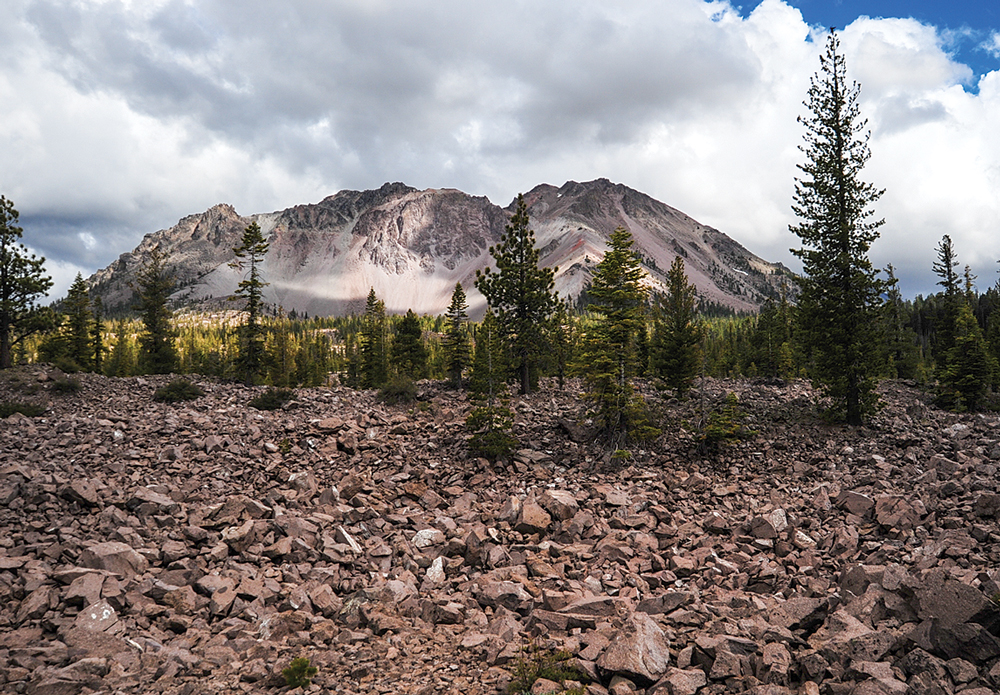 The main part of the park is reached by two entrances. Coming from the north on Interstate 5, Route 44 from Redding and Route 89 from Mount Shasta leads to the northwest park entrance, near the historic Loomis Museum. Coming from the south, State Route 36 leads from Red Bluff to the southwest entrance, near park headquarters and the year-round visitor center and café. Open seasonally, the 30-mile Lassen National Park Highway connects the two entrances and Route 89. The scenic road wends through mountainous terrain populated by wildlife and is not recommend for vehicles with a total length longer than 45 feet.
Entering from the south, one of the first areas to visit is Brokeoff Mountain, of interest historically as a remnant of what was once the dominant volcano in the region, Mount Tehama. Originally 11,000 feet in height and 15 miles in diameter, the peak eventually collapsed, leaving less impressive vestiges of its former self. The nearby Sulphur Works and colorfully named Bumpass Hell geothermal sites showcase the fact that there is still plenty happening deep underground, with bubbling hot springs and spewing fumaroles.
Within the park are four RV-accessible campgrounds, none offering hookups (see “Camping Near the Volcano” on the right). The most popular and largest is Manzanita Lake, just inside the northwest entrance. Located on a pretty lake, its 179 campsites offer easy access to a restaurant, showers, fuel, a dump station and facilities for the handicapped. It is also the site of a seasonal museum (summer and fall) that is well worth a visit for several reasons, not the least being some great photography documenting the century-old eruptions. The lake is a fine place for those with kayaks or canoes, as motors are not allowed. Like the other four campgrounds, Manzanita Lake is open seasonally with a vehicle-length limit of 35 feet. 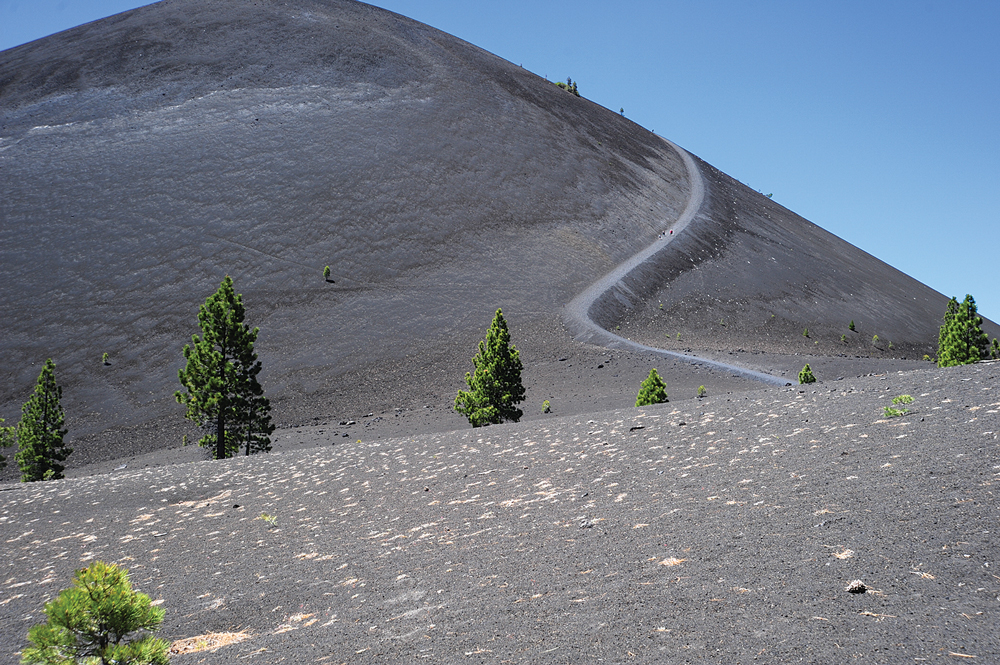 The Cinder Cone Nature Trail, with its trailhead at Butte Lake Campground, ends with
a 750-foot ascent. In hot weather, take water and have a picnic lunch at the base.

Near the center of the park, Summit Lake Campground is for those willing to forgo most of the amenities but little else. The smaller but still beautiful Summit Lake is a fine place to launch your canoe or kayak, or take a brisk swim in cool water. The campground has north and south sections, with the major differences being that the north end accommodates vehicles up to 35 feet and has flush toilets, and the south end accommodates vehicles up to 30 feet and has vault toilets.
The last campground in the main part of the park is Crags, with 45 sites, vault toilets and no lake access. It’s a good basecamp for backpackers wanting to hike the Nobles Emigrant Trail east to Butte Lake or beyond. William Nobles was a contemporary and occasional exploring companion of Peter Lassen, and his trail quickly foreshadowed the Lassen Trail as a preferred route west during the mid-19th century.
One of my favorite spots, and a wonderful place to camp, is Butte Lake Campground in the more remote northeastern corner of the park and the site of the Cinder Cone. The hike to and up that volcano is not to be missed. From the campground, the Cinder Cone Nature Trail leads 1.2 miles to the base of the volcano. Then the workout begins, as you hike to the top and, if you wish, into the caldera, the bowl formed by the last eruption. A trail leads up the side of the volcano that is only 750 feet or so in length, but it’s like slogging through sand all the way, and even the super-fit will know that they’ve been on a strenuous hike. But it must be done, because the views are wonderful. Take water and take your time. 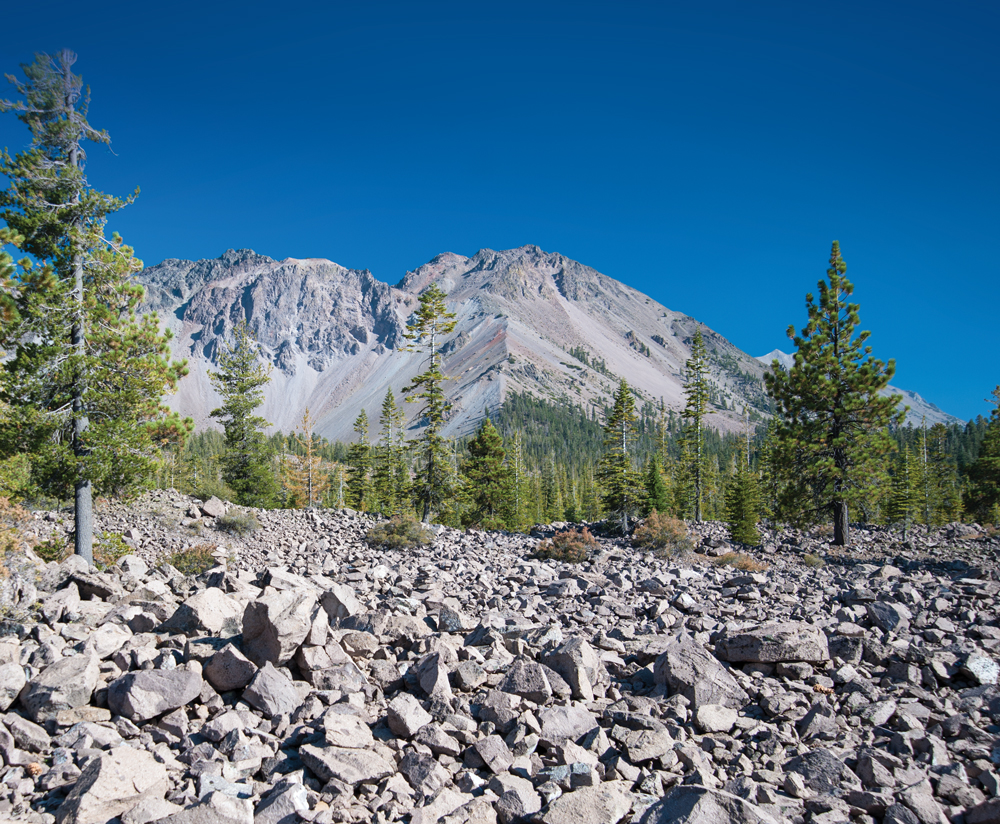 The rubble at the base
of Lassen Peak is a remnant of
volcanic eruptions.

The Butte Lake area is off by itself, reached by a separate entrance and a well-marked, well-maintained gravel road. The campground has 101 sites for vehicles up to 35 feet, flush toilets and its own little lake. Rather than being surrounded by forest, the lake has the appearance of a catch basin where volcanic rock was dropped in a bowl shape, then filled with water for our use. Canoes and kayaks are popular here, and there is less traffic than at most of the other campground lakes.
For those with smaller rigs desirous of a more primitive experience, two nearby national forest campgrounds deserve mention. On the way to the northeast entrance to Butte Lake on Highway 44, you’ll pass three campgrounds, two of which host RVs. Cave and Hat Creek campgrounds are similar, the former being able to handle rigs up to 22 feet and the latter accommodating rigs up to 30 feet. Both have drinking water and flush toilets, and the creek runs right past the campsites. Hat Creek is well known to people who fish for trout in California, so if that resonates with you, take note. 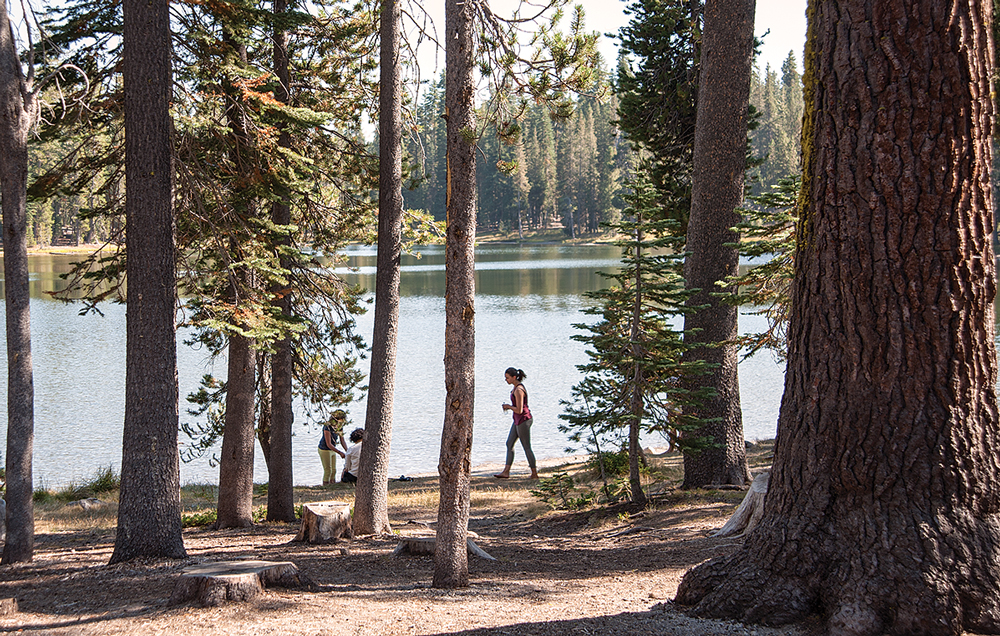 At 7,000 feet, Summit Lake ripples next to two of the park’s most popular campgrounds.
The lake is a good spot to have a picnic and take a dip in the chilly water.

Hikers will find much to keep them amused as well. Beyond the must-do Cinder Cone Nature Trail, another good choice is the Bumpass Hell Nature Trail, a 3-mile round-trip offering an education in aromatherapy, featuring odiferous things like volcanic mud pots and fumaroles. If you crave consistency, have a deviled egg sand- wich for lunch. The Devils Kitchen Trail is similar and comes in at 4.2 miles round-trip. For views, try the Lassen Peak Trail, a 5-mile round-trip with a 2,000-foot elevation gain that will reward you for making the effort.
Off-roaders, of course, are a subset of the trailer crowd, and they have a large playground in these parts in the Lassen National Forest Backcountry Byway. If your toy is street-legal, you can drive 187 miles on a series of mostly dirt and gravel roads, past volcanoes, ghost towns, abandoned mines and backcountry lakes too numerous to count, enjoy all manner of unforeseen experiences and come home dirty.
What a deal.

Camping Near the Volcano

LASSEN VOLCANIC NATIONAL PARK
The national park has four campgrounds that allow RVs up to 35 feet. These campgrounds don’t have hookups but do have picnic tables, fire grills, food lockers, drinking water and flush or vault toilets.
Reservations: 877-444-6777 | www.recreation.gov

No motorboats allowed: Manzanita Lake is a fine place to paddle, float or fish for native trout. 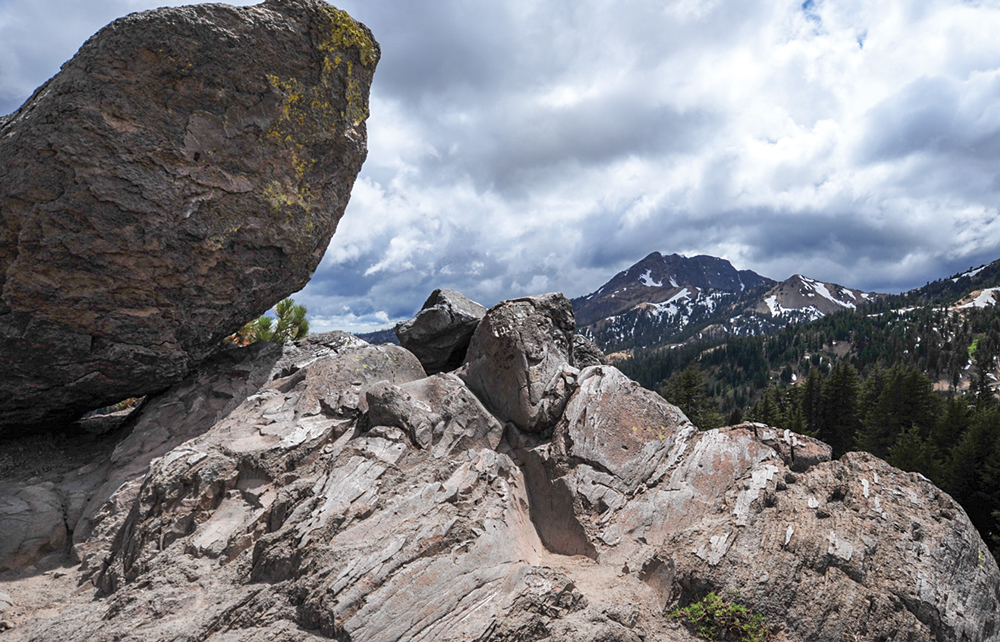 Brokeoff Mountain in the distance was once the dominant feature in the region but is now a mere shadow of its former self.

Lassen Volcanic National Park | 530-595-4444 | www.nps.gov/lavo
Five entrances provide vehicle access to the national park: the main northwest and southwest entrances on State Route 89, and unpaved roads entering near Butte Lake in the northeast and Drakesbad and Juniper Lake in the south. Although the visitor center and café are open nearly year-round (check the website for closures), most of the park opens in mid-May and closes in late September or October, depending on location and weather.