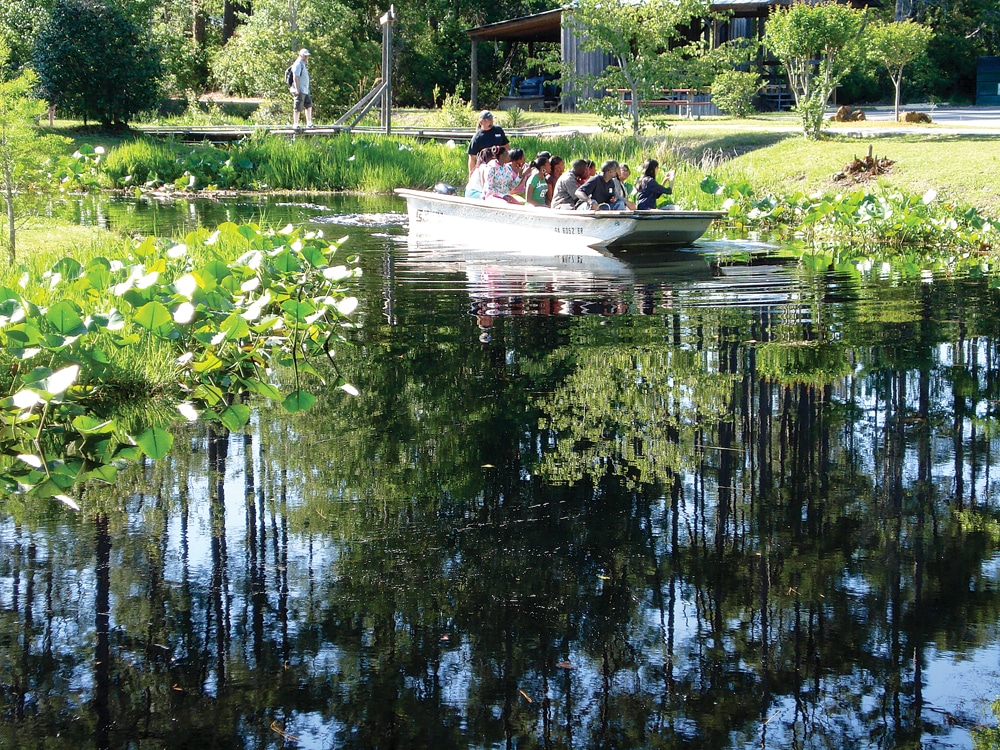 South-central Georgia is a magical place. It is home to the legendary Okefenokee Swamp; bordered by Florida to the south and the town of Tifton, Ga., to the north; and it contains a heady mix of nature gone wild as well as tamed civilized elegance.

Boat tours into the swamp are part of the fun at Okefenokee Swamp Park.

Within the confines of the south Georgia environ, travelers can expect to find extensive swamps, miles of rich forests, cultural and historic museums, colorful and well-tended gardens, quaint towns steeped in heritage, and an extensive mix of visitor amenities. One of the main draws in the area is Georgia’s famously unspoiled swampland, with its sometimes frightening collection of swamp denizens, unchecked biological growth, and attendant sights, sounds and smells.

When talking about swampland in Georgia, the most famous swamp in the southern section is the Okefenokee. So magical is the name Okefenokee that many still believe it is a fictional place, but this wonder of nature is very much real. Comprising 438,000 acres in the southeastern part of Georgia (and a bit of northern Florida), this swampland is one of the “Seven Natural Wonders of Georgia.” The Okefenokee is the largest peat-based “blackwater” swamp in North America, and is one of the largest in the world. The name of the swamp comes from an extinct Native American language and is roughly translated as “bubbling water.” The Suwannee River is the source of most of the water in the Okefenokee, and the river drains 90 percent of the swamp’s water toward the Gulf of Mexico. In 2007, a vast wildfire roared through much of the Okefenokee, burning 600,000 acres. Today, the swamp is recovering nicely.

Alligators are common in these areas.

For public access, there are four entrances/landings located at various parts of the swamp, and a large park/tourist attraction, the Okefenokee Swamp Park, just south of Waycross, Ga. The swamp park offers boat tours of the swamp, and holds a collection of swamp creatures, a deer observatory, nature center, bear observatory, acres of gardens, and its very own Okefenokee Railroad. Visitors familiar with the Okefenokee cartoon character Pogo will want to visit the park’s Walt Kelly Studio (the creator of Pogo) and the Pogo Memorabilia exhibit.

An authentic grist mill sits on the grounds of the Agrirama in Tifton, Ga.

Also located near Waycross is Obediah’s Okefenok, a tribute and memorial to swamp legend Henry Obediah Barber. This historic park contains the 1870 cabin where Obediah lived and prospered as well as other fine examples of swamp life. Swamp critters and reptiles, a hog gallows, crumbling outhouses, a grist mill, smoke house, moonshine still, and much more are also found in the park. A picturesque boardwalk leads visitors into the heart of Obediah’s realm.

Waycross is also home to the Okefenokee Heritage Center, a museum/conference center/historic exhibit teeming with interesting Waycross and Okefenokee heritage. The center features many homes and buildings from bygone Waycross times including the Waycross Journal Herald; carpentry shop; a depot warehouse; and the Hilliard House; presumably the oldest standing house in Ware County, built around 1824. The museum also has a railroad depot and mailroom, and the “Old Number Nine,” a historic 1912 Baldwin steam locomotive. The museum proper houses a Founder’s Hall, Native American Exhibit, an art gallery and a Sacred Harp Exhibit.

Next door to the Heritage Center is the Southern Forest World museum, focusing on Georgia’s forests and lumber industry. Since Georgia is one of the nation’s primary lumber-producing states, this museum is a fascinating glimpse into the world of forestry and harvesting of Georgia trees. Don’t miss the mummified dog that was found inside a tree after it was cut down.

While Waycross and the Okefenokee Swamp are certainly highlights of southern Georgia, there are additional towns in this area that hold must-see sights for tourists. Tifton, about an hour’s drive west of Waycross, is home to the Agrirama, the Georgia Museum of Agriculture and Historic Village, that plays host to thousands of eager tourists each year.

A working sawmill is a popular attraction at the Agrirama.

The Agrirama is divided into six areas: a traditional farm community of the 1870s, an 1890s progressive farmstead, a main street, industrial area, historic Tuft House and the Steam Train. There are 35 structures on the 95-acre site, including an original Victorian house built in the 1800s. Other structures of interest include farmhouses, a sawmill, turpentine still, schoolhouse, blacksmith shop and grist mill. Staff members in period costumes perform daily activities on the grounds.

Southwest of Tifton, and just west of Valdosta, is the very interesting town of Thomasville. This town is a Georgia institution, and was designated a Great American Main Street City in 1998 and named one of a dozen top places to visit in the United States by the National Trust for Historic Preservation in 1999. The town of Thomasville contains a wide range of historic buildings and homes, most dating back to around the turn of the 20th century as well as many 1800s structures. Reading a few facts about Thomasville will hint at why the town is so revered: the town’s Pinetree Boulevard is the oldest perimeter road in the United States; the WPAX radio station is the third oldest station in Georgia and the 20th oldest in the country; the Thomas County Museum of History has the oldest known private bowling alley in the country, built of heart pine lumber in 1893. Other interesting Thomasville facts are that Joanne Woodward, Oscar-winning actress and wife of Paul Newman, was born here; town resident Lt. Henry O. Flipper was the first black graduate of the U.S. Military Academy at West Point in 1877; and that Jacqueline Kennedy retreated to a Thomasville plantation following the assassination of President John F. Kennedy in 1963.

The Big Oak tree in Thomasville is one of the oldest and largest in the country.

Thomasville is also home to the “Big Oak,” an immense live oak tree more than 325 years old, with a limb span of 165 feet and a circumference of 26 1/2 feet. The Big Oak is one of the original members of the National Live Oak Society, enrolled in 1936. A day in Thomasville is more than worth the trip — it offers a vibrant historic downtown with brick-paved streets, unique shops and restaurants, and beautifully restored Victorian homes. Visitors can tour the town’s museums, have their picture taken beside the Big Oak, tour a plantation, or discover the beautiful homes and downtown on a walking or driving tour.

The area of southern Georgia bordered by the Okefenokee Swamp and Waycross to the east, Thomasville to the west, Valdosta to the south and Tifton to the north, holds a wide variety of surprises, attractions, wild flora and fauna, interesting museums and historic structures, beautiful gardens and grounds, and experiences not to be missed. And these Georgia cities may have small-town charm, but are also filled with the amenities a discerning traveler demands: tasty restaurants, unlimited shopping and first-class accommodations — definitely something for everyone.

Quality RV parks are located in the towns and surrounding areas of Valdosta, Waycross, Thomasville and Tifton.

Quality RV parks are located in the towns and surrounding areas of Valdosta, Waycross, Thomasville and Tifton.

Valdosta, the most populated of the four towns, has the largest and widest selection of parks, restaurants and shops. Roads in the area range from the huge I-75 interstate to rural roads running through Waycross and the Okefenokee Swamp area, and most all of them are suitable for large trailers and fifth-wheels. Since the area is located in the deep south, weather and road conditions are generally fair and sunny (with the exception of the rare hurricane or tornado). Since the population in this area is fairly low, traffic is usually not much of a problem, and most services are located conveniently along Interstate 75.