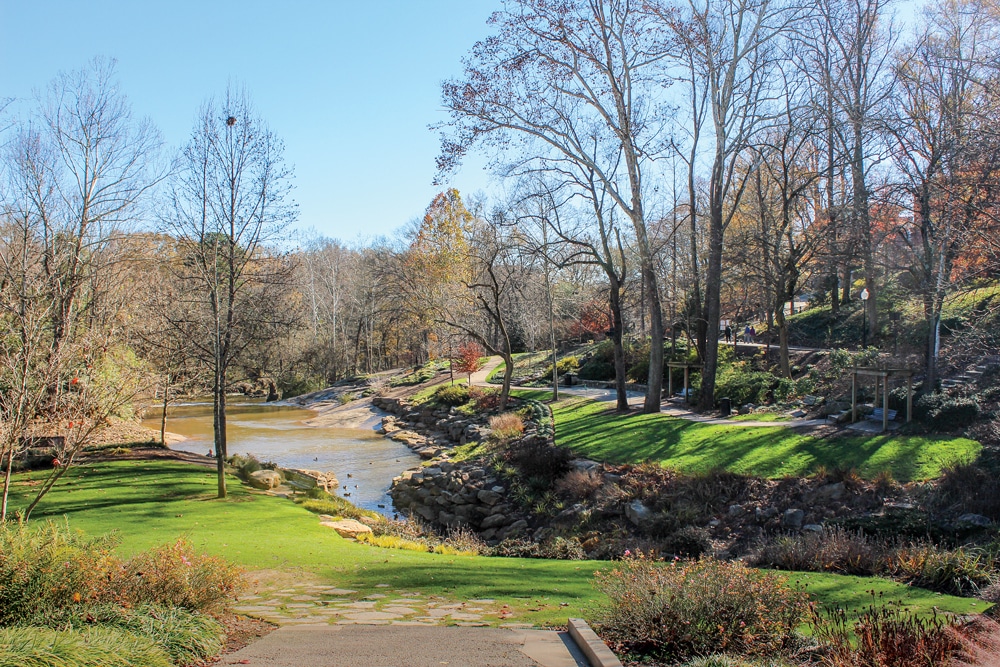 Nestled in the shadow of the Blue Ridge Mountains, Greenville, South Carolina, offers the natural beauty and charm of a relaxing Southern destination with a midsize-city appeal. You’ll find outdoor attractions, a bustling restaurant scene, a bit of history and some unique experiences that make it easy to see why Greenville is quickly becoming one of the most-visited cities in the Southeast.

If you want a home base close to the downtown area, Springwood RV Park is less than 15 minutes away. All sites at Springwood have full hookups and concrete pads, and the campground offers free Wi-Fi. Because parking is in high demand in Greenville proper, you’ll want to leave your motorhome at the campground and use your dinghy vehicle.

As you head downtown, watch for Falls Park on the Reedy River. This 32-acre park – within walking distance of many businesses and restaurants – is just as popular with locals as it is with out-of-towners. People come here to walk, run, ride bikes, eat lunch, read books and just relax and enjoy the scenery. Be sure to take a stroll along the Liberty Bridge overlooking the Reedy River. This 345-foot suspension bridge offers a spectacular view of the falls below. The bridge is lit at night.

Biking is popular in Greenville, and you’ll likely notice lots of cyclists all over the downtown area. If you don’t have a bike of your own, you can rent one, along with other biking gear, at one of the local bike shops. The city of Greenville also has its own bike-sharing program and offers bikes-for-rent at various stations throughout the downtown area. You can pick up a Greenville B-cycle brochure and map at the visitor center on Main Street. It explains the cost, how to pay and the many different pick-up and drop-off spots. (Go to https://greenville.bcycle.com for information.)

Falls Park, located in downtown Greenville’s historic West End, is a great central point for many of the city’s recreational opportunities.

Many cyclists come to Greenville with a goal in mind – to ride the 21-mile-long Swamp Rabbit Trail. The multiuse rail-trail follows the Reedy River north from downtown all the way to nearby Travelers Rest. More than .5 million cyclists, runners and walkers travel all or part of the trail every year.

The revitalization of Greenville’s downtown district shows no sign of stopping anytime soon. You’ll see numerous shops and businesses, as well as blocks and blocks of bars and restaurants offering everything from international fare to down-home Southern dishes. Every September the city holds its popular, ever-expanding four-day Euphoria festival highlighting dozens of popular chefs serving up some of their specialty dishes, along with music, events, wine, craft beer and more.

Getting There:
Greenville, located in upstate South Carolina, is reached via Interstate 26 and U.S. Route 25 from the North (Asheville/Hendersonville), and Interstate 85 from the east (Charlotte) and west (Atlanta).

The craft-beer scene is booming here, with a growing number of craft breweries, some offering tours if you plan ahead. The popular Thomas Creek Brewery was Greenville’s first, and you’ll see its flagship Red Pale Ale featured in many local restaurants.

You’ll also find South Carolina’s first legal craft moonshine (homemade whiskey) distillery here. (Other distilleries have since opened elsewhere in the state.) Roxanne Fenten and her husband, Joe, opened Dark Corner Distillery in 2011. Roxanne said Joe, an engineer by trade who grew up in South Carolina, wanted to honor some of the state’s history and heritage.

“He grew up in the ‘dark corner,’ which is the northeastern area of Greenville County. It’s where most of the moonshine was made in South Carolina.” She notes that when the distillery first opened for moonshine tastings, there were many naysayers.

“People were saying, ‘You can’t do this.’ They had a preconceived notion of how bad moonshine was. You know, you can start your car on it or you can go blind drinking it.”

Less than five years later, the distillery has expanded to a new facility and now produces a variety of whiskeys, including some with flavors like peach and butterscotch.

Along with the many unique shops you’ll want to visit downtown, the Mast General Store is definitely worth a stop. It’s set up along the lines of an old-fashioned general store and carries old-timey food items you may remember your grandmother having on hand, like stone-ground grits, honey, maple syrup, jams and jellies. It also carries nostalgia items, collectibles, home dÃ©cor, toys, an extensive candy collection, clothes and travel items. You can browse for hours. As David Vinson, a store manager, explained, the parent company has opened similar stores in North Carolina and Tennessee – places where these items bring back a lot of memories.

“Basically the concept behind it is they go into towns, downtown environments that are trying to re-establish their Main Street. They go into old buildings and refurbish an old building and they set it up and give it a general-store feel.”

The building it occupies in Greenville housed a popular general store that opened in 1883.

Baseball fans will want to see the nearby Shoeless Joe Jackson statue and visit his museum (864-346-4867, www.shoelessjoejackson.org). 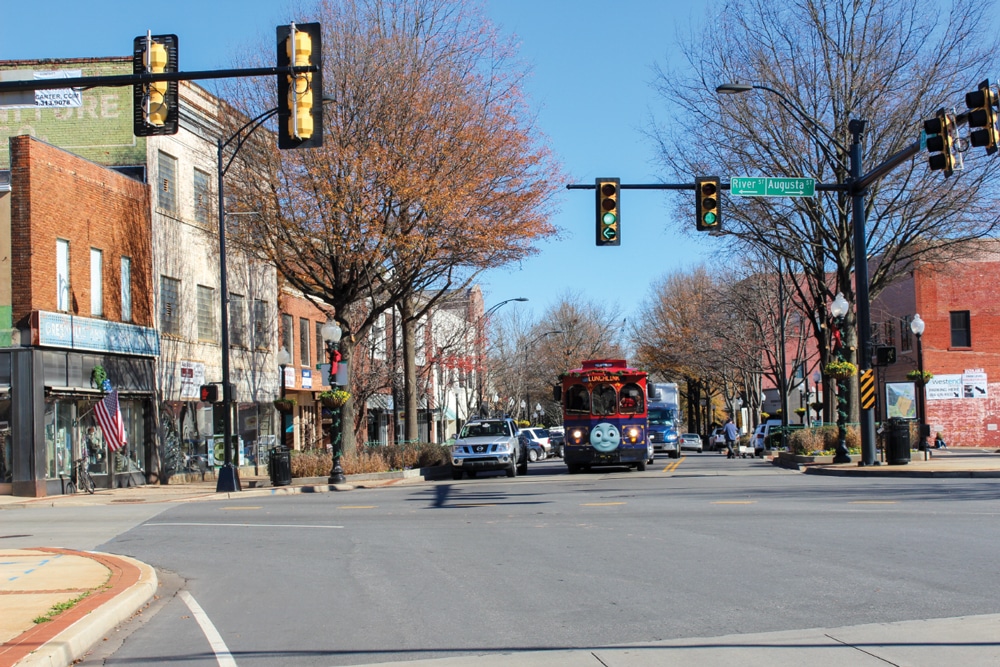 Shoeless Joe grew up in Greenville and showed a talent for baseball at a young age. He made it all the way to the big league, later to return home after being banned from baseball in the wake of the Black Sox Scandal. (Jackson was one of eight Chicago White Sox players accused of throwing the 1919 World Series in exchange for money from gamblers.)

The Shoeless Joe Jackson Museum and Baseball Library is housed in the home where Jackson lived and later died (December 5, 1951), and is full of memorabilia. It was moved from its original location and sits across from the stadium where the Greenville Drive, a minor-league affiliate (Class A) of the Boston Red Sox, currently plays.

Museum director Arlene Marcley says Jackson has thousands and thousands of fans who are fascinated by the man who still holds one of the highest batting averages in Major League Baseball history. And most of those fans believe he was innocent.

“This was Joe’s record in the 1919 World Series,” she said, pointing to his statistics displayed on one of the museum’s walls. He batted .375, which was remarkable, phenomenal. They were playing the Cincinnati Reds. He hit the only home run for both teams. He had 12 hits – a World Series record. How could he have done anything to throw it?”

“I think it’s a great piece of history for the area to honor someone who should be in the Hall of Fame as one of baseball’s best players ever.”

The Shoeless Joe Jackson Museum is only open Saturdays from 10 a.m.—2 p.m., unless you call ahead and arrange for a special tour Monday through Friday. Admission is free.

Greenville is also home to the Museum and Library of Confederate History (864-421-9039, www.confederatemuseum.org). Director Mike Couch said the museum – which has wall-to-wall firearms, uniforms, artifacts, documents and an extensive library – draws visitors from all over the world. Many come to get a clearer understanding of life on the battlefield, as well as what was happening at home during the war. Created by the Sons of the Confederate Veterans, the museum features many authentic items that were donated or are on loan from direct descendants of those who fought for the Confederacy. Admission is also free.

The Confederate Museum is just around the corner from the Greenville Zoo. This is a very small zoo that you can walk through at a leisurely pace to catch a glimpse of giraffes, lions, small primates, reptiles, birds and more. 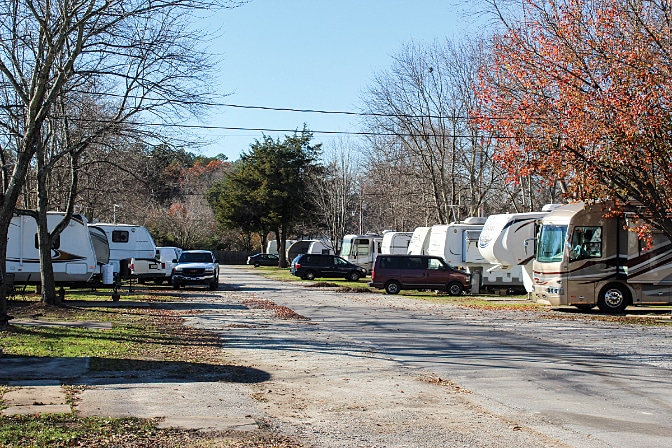 And while you’re visiting Greenville, if you have a need for speed, check out the BMW Performance Center in nearby Greer, less than 15 miles away. If you call and make arrangements, you can even get out on a racecourse and drive some of their cars as part of the BMW Performance Driving School (www.bmwusfactory.com). Professional instructors are on hand and you’ll not only have a good time, you’re sure to leave with skills that will make you a better driver. Driving opportunities vary in terms of cost and availability.

From here, if you have plans to head to the South Carolina coast, it helps to know that Greenville/Spartanburg is approximately 200 miles from Charleston and about 250 miles from Myrtle Beach.

But Greenville is so much more than a stop on the way to the coast. With so much to see and do – not to mention eat and drink – Greenville has become a premier destination of its own, and is only getting better.