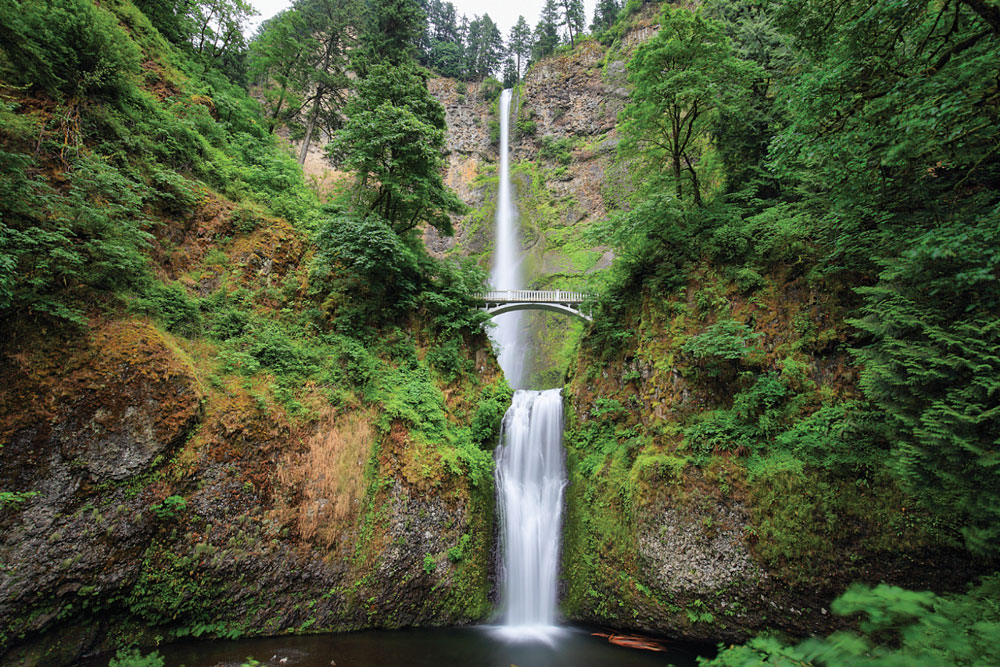 Few places in the world are as spectacular, or as perfect for  an RV trip, as the Pacific Northwest’s Columbia River Gorge

Fourteen million years ago, glacial floods carved 4,000-foot basalt cliffs and a deep chasm for the mighty Columbia River. Today, the Columbia Gorge forms the boundary between Oregon and Washington and is an 80-mile-long National Scenic Area. It’s lined with things to see and do, along with riverside campgrounds and a historic highway that celebrated its centennial last year.

Most Columbia Gorge tourists travel west to east from the Portland area, but we’ve come from central Oregon, so we enter the gorge at the little burg of Biggs Junction. The undulating hills in this eastern section are dressed in shades of summer yellow and gold with irrigated fields carved into bright green squares. Dozens of giant white windmills, their blades whirring in the breeze, top the surrounding hills, offering a surreal techno-contrast to this natural setting.

As we cross the Route 97 bridge to the Washington side of the river, a stiff wind buffets our rig and kicks up frothy whitecaps in the deep green water. Two unusual landmarks, Stonehenge Memorial and Maryhill Museum of Art, are worth visiting just across the Columbia.

Stonehenge, a life-size replica of England’s prehistoric landmark, was commissioned by businessman Sam Hill in 1918 to honor the county’s soldiers and sailors who died in World War I. The monument, which took 11 years to build and used 1,650 tons of reinforced concrete, was constructed as an antiwar “sermon in stone.” Its 15-foot pillars perch on the edge of the gorge with sweeping views of the river and snowcapped Mount Hood. It’s the kind of place that makes you stop and breathe deeply, and we hungrily snap photos of the grandeur.

Just down the road is another of Hill’s legacies, Maryhill Museum of Art, housed in a 1914 Beaux Arts-style mansion. What’s an art museum doing in this lonely, windswept place? Hill purchased 5,300 acres to build a Quaker farming community. He constructed the mansion as his home, but the war and financial difficulties intervened. Artist friends convinced him to turn the building into an art museum.

We pull into the RV-friendly parking lot and walk to the museum along a stone path that hugs the precipice. Big trees and a grassy area with picnic tables invite visitors to enjoy the surroundings.

The museum’s collection is as eclectic as its location, with fantastical chess sets from around the world, artworks from French sculptor Auguste Rodin, and Russian and Ukrainian orthodox icons. An extensive exhibit features Native American baskets, beadwork and petroglyphs. Personal artifacts range from Hill’s mementos to a bejeweled crown and flowing gowns from the Romanian monarchy (Hill was friends with Queen Marie). There’s also a modern 25,000-foot wing that houses a café, gallery and education space, and juts out over the cliff, offering eagle-eye views.

Weary from driving and museum-hopping, we wend downhill to Maryhill State Park where we have campground reservations for two nights. The park’s 4,700 feet of riverfront make it a favorite among wind-surfers and kite-boarders, and we spend the evening watching these athletes battle the Columbia’s wind and waves.

A wind-surfer plies the currents off the beach at Washington’s Maryhill State Park.

Maryhill to the Dalles

Waking to sunny skies and warm breezes, we cross back over the river to Oregon and travel along Interstate 84 to the historic town of the Dalles. The name comes from the French word dalle, for “flagstone,” and refers to the columnar basalt narrows carved by the river. After coffee and croissants at Petite Provence, we head to the Dalles Dam visitor center for the free one-hour tour.

The Columbia River, which courses from its headwaters in British Columbia to the Pacific, has 14 dams that provide energy production, flood control and water for irrigation. From May through September, visitors can tour the Dalles Dam’s powerhouse and fish ladders.

Getting to the Gorge
Easily drivable, the Columbia River Gorge stretches east to west along Interstate 84 from Biggs Junction to Troutdale on the Oregon side of the river and from Maryhill to Camas along State Route 14 on the Washington side.
Oregon’s Historic Columbia River Highway parallels I-84 from the Dalles to Troutdale. Some sections of the century-old highway have been developed as a state trail for hiking and biking. Other sections, designated U.S. Route 30, are accessible to motor vehicles, but portions are narrow and winding. Trailer-towing RVers may want to consider unhitching before driving the historic route.

We climb aboard an electric surrey for a short ride to the dam. Our Army Corps of Engineers guide, Amber, tells us that the Dalles Dam is one of the 10 largest in the country and provides electricity to a million homes. Completed in 1957, the dam submerged Celilo Falls and the village of Celilo, a Native American fishing ground and trading hub.

We take an elevator to the ½-mile-long powerhouse. “You’re underwater,” Amber says, speaking loudly enough to be heard above the din of 22 enormous generators. “These concrete walls are holding back the river. And concrete is porous,” she adds. “How’s that make you feel?”

In another room, we peer through a fish-counting window and watch salmon and lamprey swim past. Outside, we travel down a ramp to enormous fish ladders that enable migrating chinook, coho and steelhead to spawn upstream. As we gaze into the murky depths, hundreds of salmon and an occasional giant sturgeon jockey for position.

Back at the visitor center, Claudia Brown and her husband, who are towing a fifth-wheel from Florida, tell us they’ve been visiting the gorge for a week. “There’s so much to do here, and we’ve barely scratched the surface.”

At the exit for the Dalles, we turn into the Winery at the Sunshine Mill. For more than a century, the Sunshine Mill ground wheat here. The flour mill closed in 1978, and the cavernous building and silos sat empty until local entrepreneurs James and Molli Martin reopened it for wine tasting and special events. The old building retains much of its original machinery and charm, including tables made from milling machine guards and a cavelike dining room with massive concrete pillars.

We sample Quenett and Copa Di Vino wines ($7 for five tastings), and eat scrumptious grilled-cheese sandwiches for lunch. Then we motor uphill to the Fort Dalles Museum. The military outpost, built to protect settlers from Native tribes, once covered a square mile and featured Gothic Revival residences. Sadly, fire destroyed all but the 1856 Surgeon’s Quarters, which visitors can tour.

Museum volunteer Mary shows us displays of Native artifacts, including arrowheads, saddles and guns, along with antique furnishings, paintings and photographs. Outdoors, she points to old-time buggies, wagons, hearses and other horse-drawn conveyances. 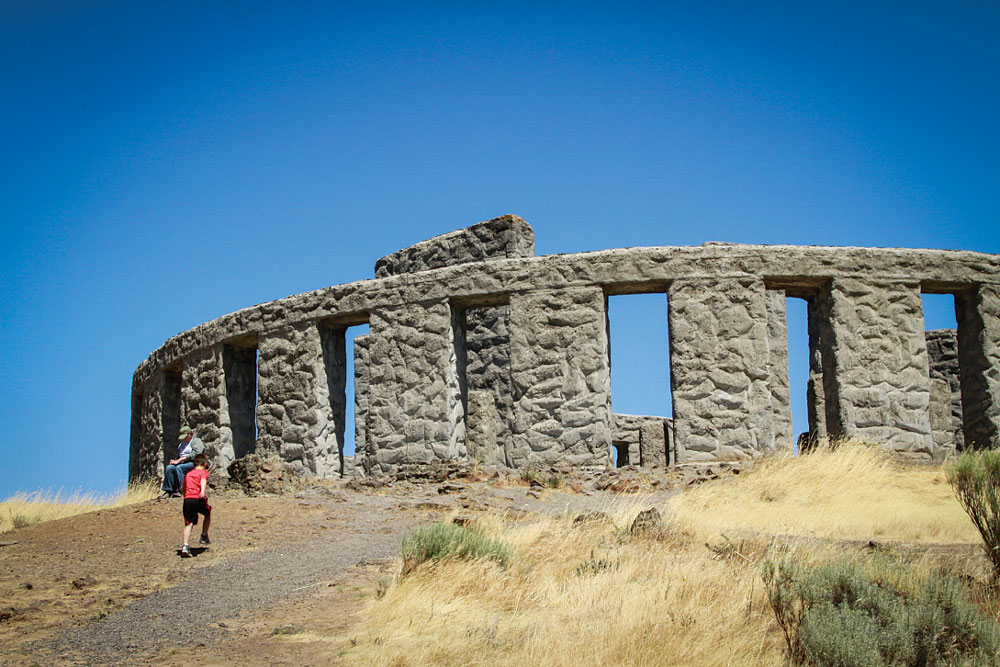 Stonehenge on the Columbia River, a full-scale replica of England’s landmark, was built by Sam Hill in 1918 as a World War I memorial.

Then it’s on to the Columbia

Gorge Discovery Center, a modern exhibition facility that tells the story of the gorge from its geology to its people. The sleek glass-and-wood building also houses the Wasco County Museum. We spend a few hours meandering through mammoth bones, Native artifacts, and exhibits on explorers Lewis and Clark and the river’s canals and locks. Wasco County built an entire Western town here, complete with cowboys, and a fascinating display on little-known pioneer John Charles Fremont, who mapped the Oregon Trail.

We leave the Discovery Center with our heads spinning. We’re also famished and drive to Baldwin Saloon, a favorite eatery in the Dalles. Built in 1876, the old brick building has been a bar and restaurant, coffin storage space, steamboat-navigation office, warehouse and custom saddle shop. In 1991, Mark and Tracy Linebarger restored the Baldwin, and foodies have been flocking here ever since.

We enjoy perfectly cooked prime rib and Parmesan-crusted halibut with creamy mashed potatoes and sautéed brussels sprouts. We’re stuffed, so we take our desserts — bread pudding with blueberries and a triple-chocolate cake — back to camp to enjoy later.

The Florida RVers we met were right — we could spend days exploring this area. But time is limited, and the following morning we drive west on I-84 to exit 40, and turn off at the Bonneville Fish Hatchery in Cascade Locks. (Note that the overpass clearance is 15 feet in the center and 12.4 feet on the sides.)

The hatchery, one of the country’s oldest, is a hidden gem with beautiful old buildings and shady ponds teeming with salmon, sturgeon and rainbow trout. The free self-guided tour leads us to an underwater-viewing window and, Herman, a 70-year-old celebrity sturgeon, who’s 10 feet long.

We lunch under the hatchery’s massive firs and cedars, and then head to Ainsworth State Park, our berth for the night, to drop off the trailer at our forested campsite. We’re eager to drive the Columbia River Historic Highway (a.k.a. U.S. Route 30), but the road is narrow and winding, and parking space is limited.

The 73-mile route, built a century ago by Sam Hill of Maryhill Museum and Stonehenge fame, was called the King of Roads for its spectacular views and handcrafted stone bridges and guard walls. Largely abandoned when the new highway was built, the road has been reconstructed with segments that are drivable; other stretches can be hiked and biked.

Our first stop is Horsetail Falls, an impressive 176-foot cascade that drops over sheer basalt walls into a plunge pool surrounded by hand-chiseled rock walls. Visitors can hike the 1.4-mile Oneonta Trail to Upper Horsetail or the shorter .4-mile route straight up.

Just down the road is Multnomah Falls, a roaring, awe-inspiring cascade of icy water. This double waterfall and its 1925 stone lodge draw thousands of visitors each year, and this Sunday is no exception. We skip the crowds and stop instead at Rowena Crest, a dramatic overlook that provides wide views of the dry eastern side of the gorge and the Rowena Loops, figure-eights built into the highway to enable Model-Ts to climb the heights.

Then it’s on to bucolic Shepperd’s Dell where there’s a wide turnout and an easy hike to the falls’ viewing platform. I stand, feeling the delicate spray on my face, and peer up at sheer basalt walls festooned with moss, ferns and splashes of red poison oak.

Latourell Falls, a 249-foot plunge surrounded by swirling basalt that forms an otherworldly cave, is another popular stop. We follow a steady stream of visitors to its plunge pool and then lose the crowds on the shady 2.4-mile loop trail to the upper falls and Guy Talbot Park.

Our final stop is Crown Point and Vista House which, for many, is the starting point of the trip. Completed in 1918, Vista House is an elegant rest stop with marble floors, opalescent glass windows and world-class views. We stand on the second-floor observation deck and breathe in the magic and the miracle that is the Columbia Gorge.

Camping on the Columbia

Commercial RV parks and public campgrounds can be found along the Columbia Gorge, including two tree-shaded state parks where the author camped — one in Washington on the eastern end of the gorge and the other in Oregon next to the Historic Columbia River Highway.

WASHINGTON
Maryhill State Park
With 50 spacious full-hookup sites right on the Columbia River, a shower house and a free RV dump station, this campground near Sam Hill’s Stonehenge fills up fast in summer, so make reservations well in advance.
509-773-5007 | www.parks.state.wa.us

To find more places to stay, go to www.goodsamcamping.com.