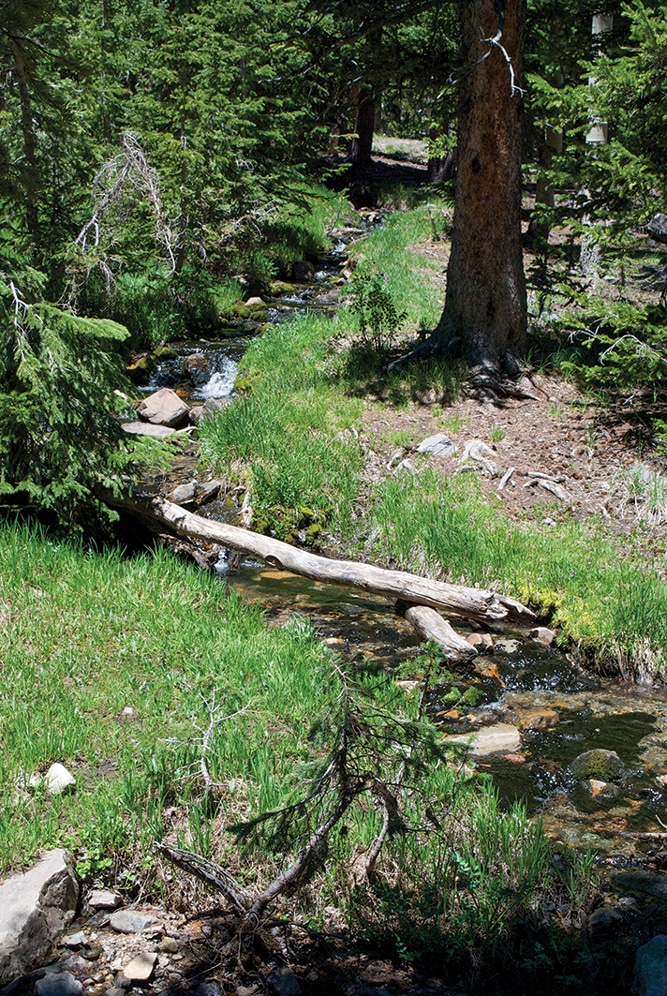 For more than 400 miles, U.S. Highway 50 — much of it aptly nicknamed the Loneliest Road in America — runs east across Nevada toward Great Basin National Park. The 287 miles between Fernley and Ely course through just about the most parched, dried-up landscape you’ll see anywhere outside the Sahara. Along certain stretches, you pass nothing but crusted mud where long-gone lakes once were, though now the ground sprouts not so much as a sprig of sagebrush.

Elsewhere, there’s a scattering of dry grass, clumps of sagebrush and rabbitbrush in this series of enormous bowls rimmed by rugged mountains, where passes are high (many of them upward of 7,000 feet), and even the rock outcrops look sunburned. More distant peaks are purple in the afternoon sun against a pale blue sky.
It’s a lonely, desolate land, where signs of life — of any variety — are few, though some folks (my husband and I among them) find it strangely beautiful. Just make sure your vehicle’s fuel tank is full and you have plenty of drinking water before setting out, as it gets hot here (with winters quite the opposite), and services are rare as rubies.
There’s a reward for driving this empty road across the Silver State, other than the thrill of seeing the crumbled, pueblolike ruins of long-ago Butterfield Stage stops and a couple of historical markers noting the similar-era route of Pony Express riders, or of finding a sun-bleached cow skull resting against a clump of sagebrush near the pavement (no live cows in sight, however).
Great Basin National Park, 68 miles east of Ely and a dozen or so miles west of the Utah state line, is the payoff — and also our destination. The park, created in 1986 to preserve 77,000 acres in the south Snake Range, may not be well known, but it is nonetheless among the finest of the many national parks we’ve visited.
Ranging in elevation from 6,200 feet to more than 13,000 feet at permanently ice-capped Mount Wheeler’s summit, the park represents the entire Great Basin, which occupies a “physiographic region” of some 200,000 square miles, stretching from California’s Sierra Nevada to Utah’s Wasatch Mountains, spanning most of Nevada and reaching into Oregon and even Idaho.

This world of sagebrush-covered valleys and narrow-but-steep mountain ranges was named for its lack of drainage outlets to the sea. The few streams that enter Great Basin dead-end in valleys, where the water collects in shallow salt lakes, marshes and mudflats, and evaporates in the dry desert air. Plants that grow here tolerate salt and manage to survive on as little as 5 inches of rain a year.
Viewing America’s largest desert, it’s hard to believe that 15 millennia ago glaciers sprawled among the peaks of the Snake Range, and the valleys were filled with sinuous lakes, the largest being Lake Bonneville. But 5,000 years later, the climate began to warm. Glaciers melted, and the lakes dried up, leaving Utah’s Great Salt Lake a “shrunken remnant” of what Bonneville had been, so huge it lapped at shores just 10 miles from today’s park boundary.
Visitors to Great Basin National Park have much to enjoy, including a spectacular cave that started forming some 600 million years ago, thousand-year-old Native American pictographs, a scenic drive that climbs more than 3,400 feet in a dozen spiral miles, numerous hiking trails and the oldest living trees in the world. The park has five campgrounds, with Lower Lehman Creek being the only one open year-round (it does not offer water in the winter).
To get to the park from Highway 50, take State Route 487 south to tiny Baker (half a dozen miles west of Utah), where the Great Basin Visitor Center (summer hours only) is located. There, 25 minutes of films and dozens of exhibits tell the story of the area and the park.
Drive west on State Route 488 for 6 miles to the park and the Lehman Caves Visitor Center (open year-round), where similar information is available. Just out back is the entrance to the highly ornate subterranean world that is Lehman Caves — a single cavern despite the name.    Lehman Caves is not extensive by some standards (think Carlsbad or Mammoth, both explored in this issue starting on page 28). Instead, it seems that Mother Nature was given just half a mile to decorate and decided to shoot the works. Daily tours pass by — in places, squeeze by — an almost bewildering array of stalactites, stalagmites, columns, flowstone, soda straws and draperies.

Heading back down the mountain from the visitor center, a right turn on Baker Creek Road took us to Pole Canyon Picnic Area and Baker Creek Campground. The road also leads to Grey Cliffs and Upper Pictograph Cave, our reason for making the turn.The drawings are believed to have been made by the Fremont culture, farmers and hunters who lived in villages in the Snake Valley from about A.D. 1000 to 1300. Most of the drawings appear to represent human or animal shapes. Others are more abstract, and their subjects are, today, anybody’s guess.
We returned to the main road and continued east a short distance to the left turn onto Wheeler Peak Scenic Drive, a dozen miles of hairpin turns and an 8 percent grade up the shoulder of the massive mountain. Driving the corkscrew road, we passed numerous overlooks for wide views of the mountain and the desert far below, and elevation signs — 7,000 feet near the start to over 10,000 feet at the summit. There, we looked south to the snow-furrowed 13,063-foot peak, the highest point in the park.

Great Basin National Park: Admission to the Nevada park is free, but fees are charged for cave tours and stays at the five developed campgrounds. A café and a gift shop next to the Lehman Caves Visitor Center are open in summer.

Incredibly, a campground at the summit had several small RVs parked in the wooded sites (24 feet is the maximum length allowed for vehicles traveling the scenic drive). Five trails begin here, ranging in length from the 8.4-mile Wheeler Peak Summit Trail to the .4-mile Sky Islands Forest Trail, an easy jaunt through the trees — all we attempted our first day, as the sun was setting.
We returned the next day for another go at the 12-mile scenic drive, this time to hike the 3-mile Bristlecone Trail, which starts at the summit and is not an easy walk. The path is narrow, bulging with rocks and occasional boulders, webbed with stout tree roots, and here and there overlaid with a dead tree trunk, fallen in this spruce and limber pine forest. The path also climbs 600 feet in its entirety, crosses a talus slide and for the last half mile or so is little more than a scrape across the mountain, a near-vertical up to one side and a near-vertical down to the other. There’s also the altitude — around 11,000 feet — to contend with. Carry water. Wear sturdy shoes. In winter months, the trail is open, but there’s snow from around the end of October through March.

An 8.4-mile trail leads to the summit of Wheeler Peak, topped in snow for much of the year.

The hike is worth it. At the top, among the rocks, stands a grove of the oldest living things on earth, bristlecone pines. One of the trees, now called Prometheus, was dated to be more than 4,900 years old in 1964. Unfortunately, before this was a national park, Prometheus was cut down so its growth rings could be measured. Today, a 4,600-year-old bristlecone in California predates Great Basin’s remaining conifers. Placards explain that bristlecones survive because of their unusual ability to adapt to the environment. Their growth is slow, the wood fine-grained, resinous and resistant to decay. Thus, even after death, the trees can stand for thousands of years. A tree named Adversity is among these, bleached creamy yellow and gray in death. The tree was “born,” reads the placard, in 100 B.C. — the same year as Julius Caesar, it occurred to me, though despite its name, Adversity lived far longer, until A.D. 1400.
Later, at the Border Inn Casino campground, 13 miles east of the park, we watched the evening sun pour amber light on Wheeler’s high flanks, the color slowly dimming to black against a yellow sky. The winding road up had become invisible with distance, and once again, as before we’d driven and walked it, Mount Wheeler seemed unknowable, somber, forbidding. Although our acquaintance had been brief by the mountain’s reckoning — and even by our own — we knew better.

Campgrounds in the Great Basin

The Border Inn Casino, on the Nevada-Utah border in Baker, is open year-round and has pull-through sites, all with full hookups.
775-234-7300 | www.borderinncasino.com

A couple of hikers who braved the steep 3-mile Bristlecone Trail study an ancient pine. These trees survive due to their dense, resinous wood and because they thrive where little else can grow.

Whispering Elms Motel and RV Park in Baker is open spring, summer and fall, and has 25 full-service sites.
775-234-9900 | www.camptheelms.wix.com/the-elms

Nevada Northern Railway
Visitors can take a 90-minute train ride to experience the Old West and what it was like to move a mountain of copper ore. A 19th-century steam locomotive pulls vintage Nevada Northern railcars along the country’s best-preserved short-line railroad, a National Historic Landmark. Trains run from Ely toward the Ruth mine on weekends from April through January and daily from Memorial Day weekend through Labor Day.
866-407-8326 | www.nevadanorthernrailway.net