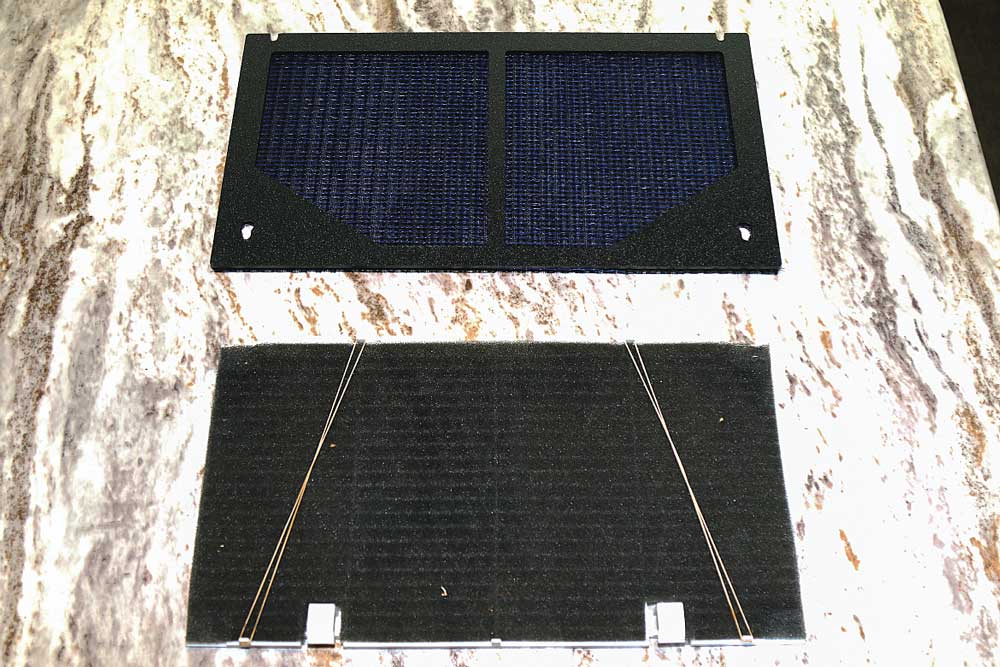 An easy upgrade takes the growl out of ducted air conditioners

Rooftop air conditioners revolutionized the industry and made camping locations more pleasurable and accessible at times of the year when an RV would otherwise be unbearably hot. But along with the comfortable temps an A/C unit can bring, there is one annoying drawback. They tend to be somewhat noisy in operation. Maybe not on the order of jet-engine loud, but annoying enough to make sleeping difficult, watching TV bothersome and even conversation seem like a shouting match. Sure, you could sleep with a pillow over your head or turn up the TV volume to drown it out, but you shouldn’t have to.

The folks at WackO Products came up with a solution to make that A/C unit not only quieter but more efficient. Dubbed the RV A/C Silencer, it consists of a replacement for the factory return-air cover. Once installed, it redirects the cabin’s return air through a padded chamber and channels the cooled outgoing air exclusively to the A/C ducts, resulting in quieter overall operation. It also replaces the foam filter found in most units with a durable, washable filter sandwiched inside a frame that does a better job of filtering the return air and containing sound inside the A/C unit, noticeable just by comparing the two filters side by side.

Available in two models to fit popular Dometic and Coleman-Mach ducted systems, the RV A/C Silencer was easy to install and made an appreciable improvement in sound reduction on a 15,000-Btu Dometic A/C unit inside a Winnebago Minnie Plus test trailer. There was no noticeable loss of airflow from any of the registers in the trailer. In fact, the air through the registers in the bunkroom, which are farthest from the rooftop unit, seem to blow just a bit stronger than before. 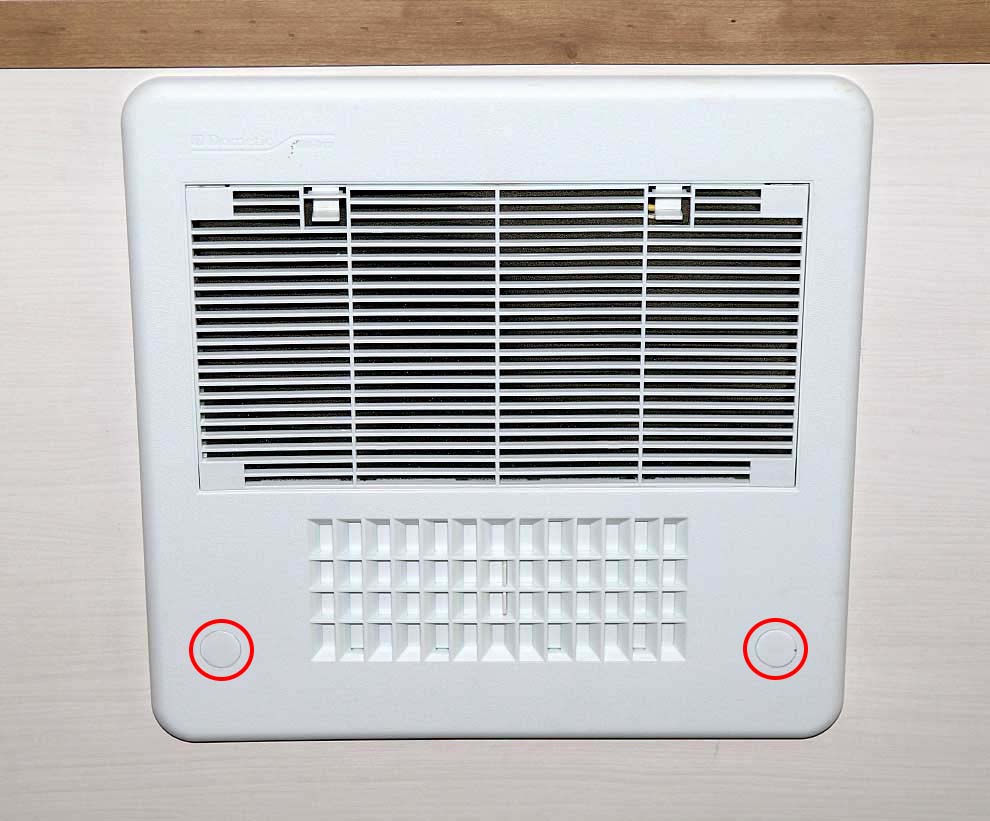 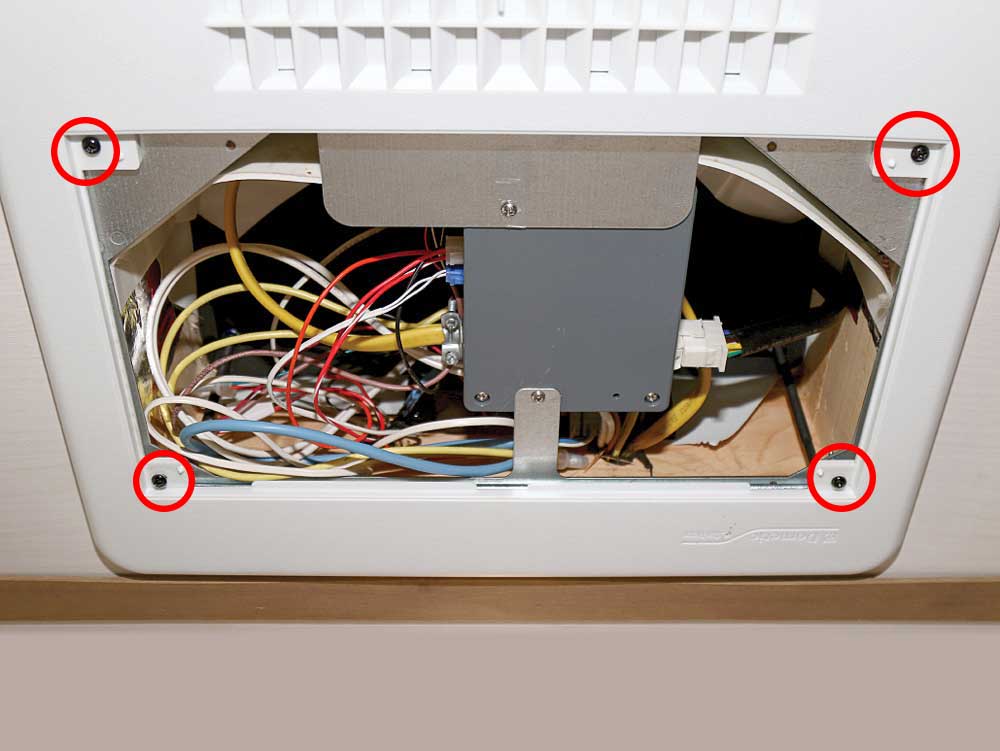 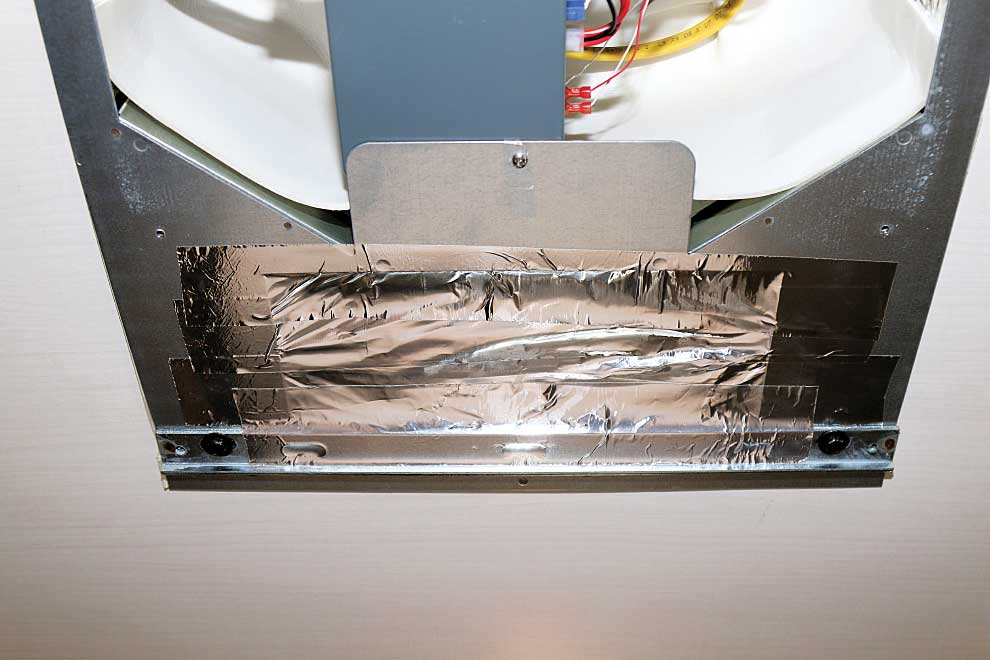 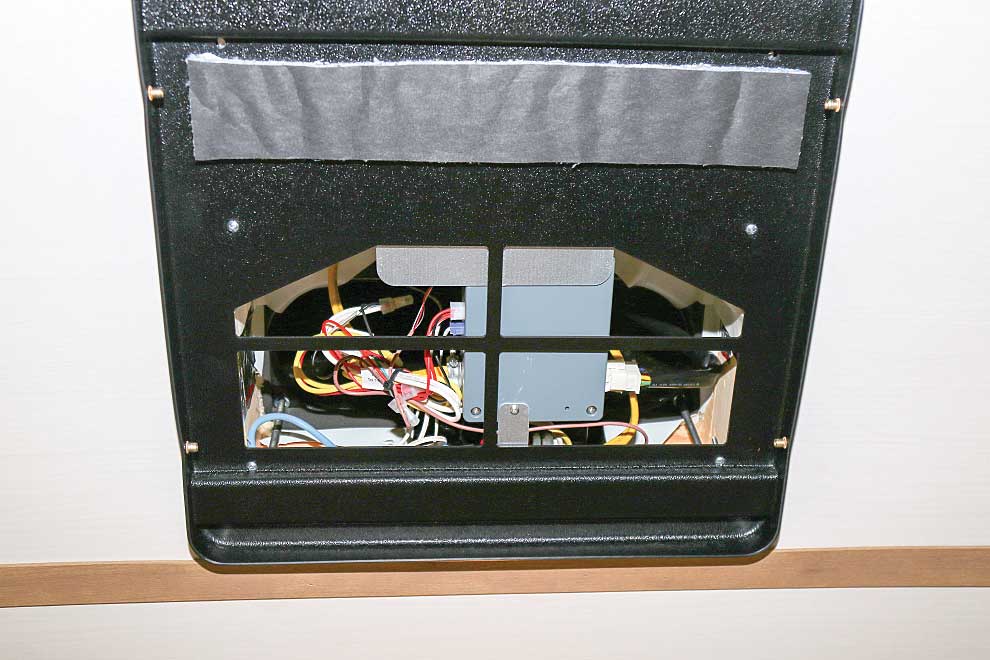 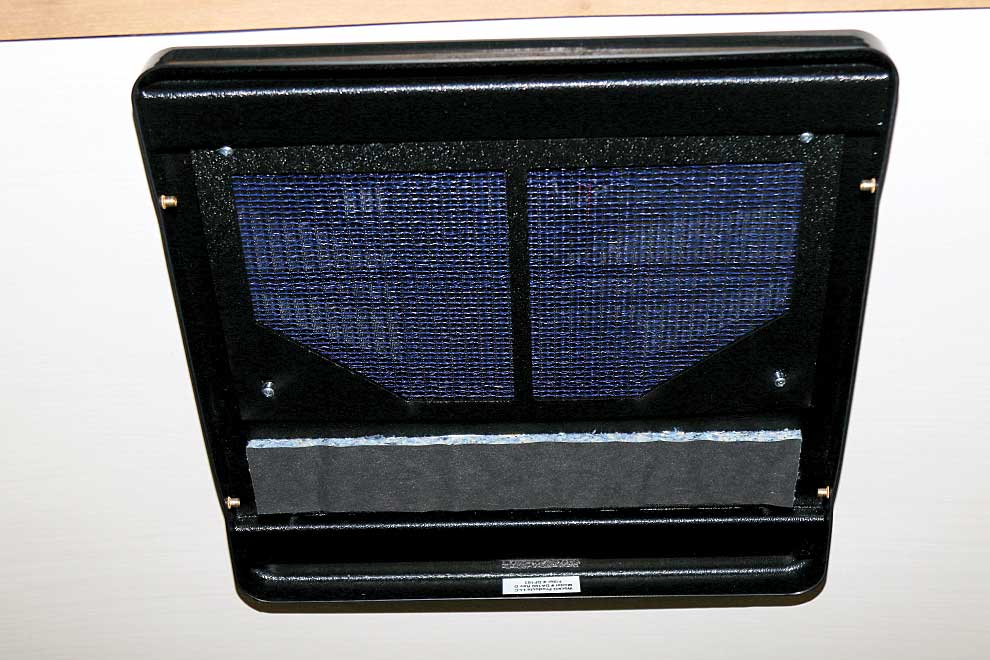 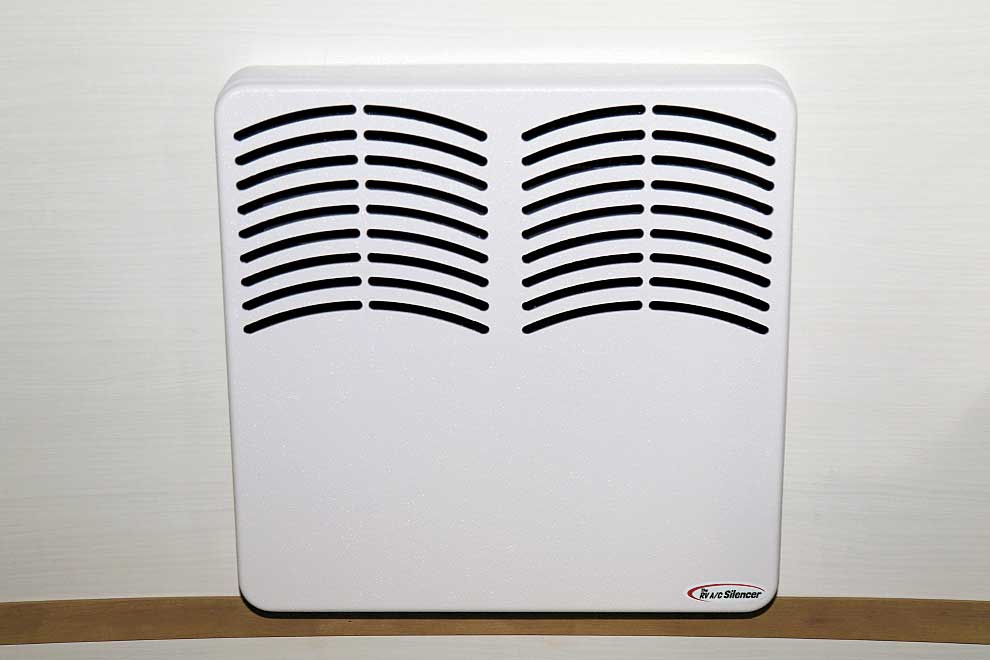 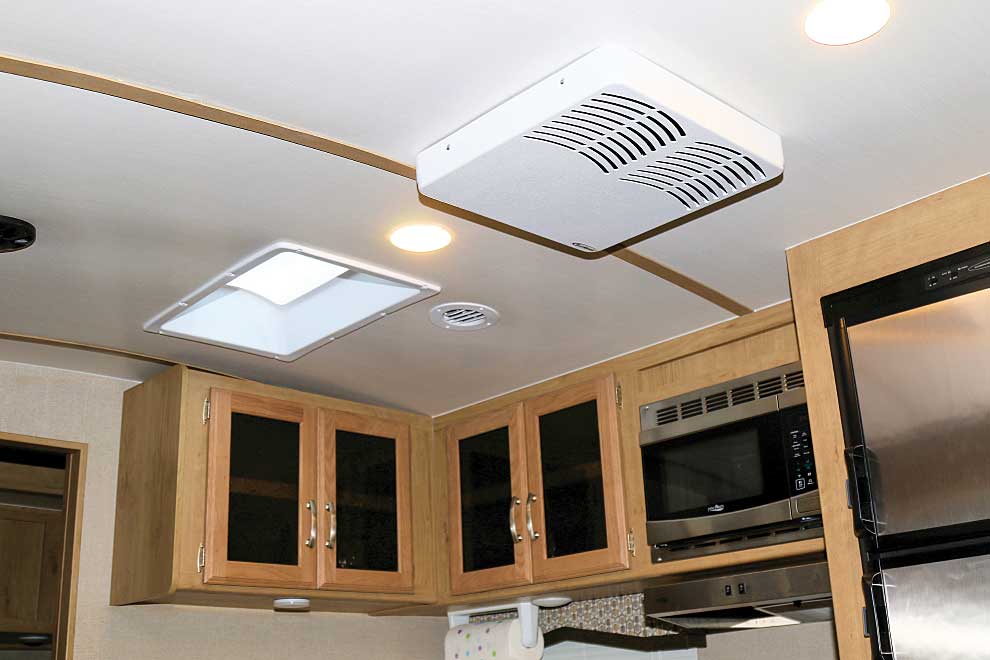 The original return-air cover extended from the ceiling a little more than ¾ inch, compared to about 2½ inches for the WackO RV A/C Silencer counterpart. Despite being more than twice as thick, it is not obtrusive unless you have a low ceiling height and/or tall people using the RV.

The only drawback is that you lose the ability to distribute cold air directly from the A/C unit by opening the slider in the factory cover, which will probably be a negligible inconvenience for most RVers. Overall, we were impressed by the quality of the product and ease of installation of the kit.

A decibel-meter app on a smartphone was used to verify the reduction in air-conditioner noise with the WackO RV A/C Silencer installed. While the product did not completely “silence” the operation, it did quiet it down enough to make watching TV, conversing and sleeping a lot more enjoyable.

It may not seem like much, but a nearly 6-decibel reduction in a space of less than 100 square feet is very noticeable. Sound-level measurement is exponential so even a reduction of 1 decibel can be significant. It was even more remarkable that the sound level with the A/C on and the WackO A/C Silencer in place was only 2.6 decibels louder than when the A/C was turned off.

Residing in West Palm Beach, Florida, Rick A. Diaz is an avid mountain biker, woodworker and former Hollywood, California, custom Harley-Davidson shop owner, as well as a motorcycle and truck journalist. Rick will be taking his fiancée, their two retired racing greyhounds and an Italian greyhound puppy on adventures in their Winnebago Minnie Plus while contributing to Trailer Life.