Sierra Nevada: How the West Won Us 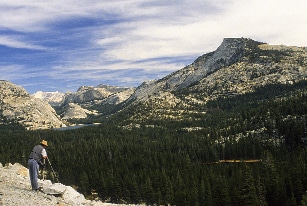 For decades we’ve traveled California’s picturesque U.S. Highway 395 along the eastern Sierra Nevada, which is Spanish for “snowy range.” We have always been in a hurry to get from one end of the country to another. Sure the scenery was pretty but after stopping at Yosemite National Park and Mono Lake we thought we’d seen all of the major attractions. After enjoying a presentation by a fellow photographer showing the beautiful Alabama Hills where Hollywood makes so many of its Western movies, we wondered what else we were missing along this route.

Traveling from north to south, we searched for the wonderful secrets that lie hidden just beyond the pavement along the 300-mile stretch of Highway 395 from Topaz Lake on the Nevada/California border all the way south to Tehachapi, Calif.

Smoke billowed from a wildfire in the Sierra as we drove south from Reno, Nev., and a smoky haze lingered into the afternoon as we crossed into California at Topaz Lake. There is an agricultural checkpoint here that looks for citrus, so if you have any, eat it before entering California.

Part of the majestic Sierra Nevada as seen from the Mono Lake region.

Black storm clouds soon filled the sky and fat raindrops spattered our windshield as we climbed up and over Devil’s Gate Summit, where John Fremont crossed in 1844 while searching for a route across the Sierra Nevada. This is the highest point along Highway 395 and it’s hard to believe that 400 million years ago this area was all ocean making the western coastline of our country run through Idaho and Utah. The exact way the Sierra Nevada developed is still a bit of a mystery. Scientists debate several theories but it is obvious that volcanic activity and the shifting of the Earth’s plates played a large part, leaving tall, craggy mountains, lush valleys and vast precious metal deposits that may have filtered through the rock and soil from as far away as central Nevada.

The Gold Rush days of the 1800s created a wealth of legends about the Sierra that still entertain us in Western movies and novels. Today, little towns that sprouted during the era of the Wild West lay half-forgotten along Highway 395, and are growing more dilapidated as the years pass. There is still tremendous treasure to be discovered along this eastern side of these craggy blocks of igneous rock known as “California’s backbone;” historical ghost towns, outdoor recreation, movie locations, wind and solar farms, and some of the most beautiful scenery on Earth.

Bridgeport Reservoir RV Park and Marina is located on the east side of the Sierra. Most of the campsites overlook the reservoir.

Bridgeport Reservoir RV Park and Marina was our home for several days while we explored the backroads of the northern end of the scenic byway. Weather-beaten, ancient buildings tell the tale of early pioneers and vast ranch lands conjuring visions of cowboys rounding up cattle. Vast and enticing trails invite hikers, horseback riders and four-wheelers. Near the trails, there is a reservoir known for its trophy-sized trout. As we set up camp, a group of young people brought out some huge fish they caught that morning. After we expressed suitable admiration, a nice fat trout ended up in our refrigerator. Not being avid fishermen, we hadn’t even thought about bringing fishing gear.

Yosemite National Park is a treasure-trove for photographers and nature lovers.

A storm was brewing the next morning as we made a dinghy run out to the old ghost town of Bodie located along a dusty 13-mile road southeast of Bridgeport. A strange light illuminated the heavy clouds, turning the sky deep purple as spears of lightning danced across the sky. Thunder rumbled and echoed through the hills lending an eerie atmosphere to the aging buildings that spilled downhill from the old Standard Mill. The storm made it easy to imagine the noise and chaos of long ago when 20 huge stamps pounded around the clock, crushing ore from as many as 30 mines in Bodie, a town that once thrived on mining. With 170 of the original 2,000 buildings still standing, Bodie State Historic Park is an original mining town from the late 1800s preserved in a “state of arrested decay.” It was gold that built Bodie and in 1879 the population was around 10,000. Known as one of the rowdiest of the Wild West towns with 65 saloons, opium dens and brothels, violence and daily murders were commonplace. Though Bodie was founded on gold, ore production in the area was estimated to be $3.1 million in 1881. By 1910, the town’s population shrank to just 698 families who chose to stay rather than leave for better mining opportunities. However, by 1943, Bodie was left desolate.

In 1961, Bodie was designated a National Historic Site and just a year later was rescued from the ravage of vandals as the area was designated Bodie State Historic Park. The Park’s existence remains iffy, as California’s State Parks struggle with budget cuts. As with many of the old mining camps, it is said that much gold remains deep beneath the surface, but is too costly to extract. Though Bodie is open year-round, the entrance road is closed during the winter and there is no on-site camping.

By 10 the next morning, the storm passed and a small group of visitors gathered at the entrance of the old Methodist church, listening spellbound as a park volunteer spun tales of gold, greed and mayhem. In the palm of his hand he held two shiny nuggets from a nearby mine. After stopping at the small visitor center, where we picked up free tickets to tour the stamp mill later in the afternoon, we prowled among the old buildings and peeked into dusty windows, imagining the lives of those who lived there long ago. There are no commercial services for miles so be sure you bring water and any food you might want. Visiting Bodie will easily fill an entire day.

As we continued south on Highway 395 looking for more uncharted treasures, we drove through a volcanic landscape with the Sierra looming on the right. Our next campsite was Mono Vista RV Park in the little town of Lee Vining. From here, we explored the fascinating rock formation of Mono Lake and then made a long day trip over to state Highway 120 and into Yosemite National Park. We could have taken the motorhome and camped in the park but chose not to. We have visited Yosemite several times in the past and the route to Yosemite is steep and winding. It would be better to visit Yosemite from the western entrance if you are nervous about driving this type of terrain.

Just south of Highway 120, we came to the June Lake Loop, a 14-mile stretch that passes four small lakes, all said to be good for fishing. Farther south is Mammoth Mountain Ski Area, where you can take a shuttle bus to the nearby Devils Postpile National Monument and see hexagonal rock formations that reach 60-feet high.
Continuing south, Bishop, known as the Mule Capital of the World, is the largest town along this stretch of Highway 395. If you are there around Memorial Day you can attend the Bishop Mule Days Celebration (May 22-27, 2012) commemorating the pack animals that played such an important part in the history of the Eastern Sierra. Laws Railroad Museum fascinates railroad buffs with railroad cars from the 19th century. There is also a Western town created from old buildings gathered from nearby Owens Valley. We recommend camping at Brown’s Town Campground.

The next section of Highway 395, along the Owens River, brought beautiful views of the eastern side of John Muir Wilderness, Sequoia National Park and Kings Canyon. We also passed Mount Whitney, the highest peak in the U.S. outside of Alaska. Keep your eyes open along this stretch because even though grizzly bears no longer roam these mountains, you may still spot black bears, deer or a coyote. Eagles, hawks and many other birds are frequently sighted and we have heard that, very rarely, you may catch a glimpse of a puma, cougar or bobcat – one of the great cats that used to prowl these mountains in formidable numbers.
Independence, the county seat of Inyo County, Calif., is another small town rich in mining and farming history. Visit the famous ancient courthouse in Independence, a true vision of the 1920s. For access to the John Muir Wilderness Area, we recommend taking the Onion Valley Road leading west of town. History buffs will want to check out the Eastern California Museum to see the large selection of historical photographs and Native American basketry.

In the area near Sequoia National Park, you may see black bears in the trees.

Our next stop was Lone Pine and the eagerly anticipated Alabama Hills. During our visit the heat was fierce so finding a campground with electrical hookups was crucial. Boulder Creek RV Resort was a good choice. There are also several small Bureau of Land Management campgrounds that would make nice camping in cooler weather. A visit to the Lone Pine Film Museum gave a rich history on the movies made here. After excellent hamburgers and onion rings at the Mount Whitney restaurant, we drove back to the intersection of Highway 395 and state Highway 136 to the visitor center for Alabama Hills. We motored out of the Whitney Portal Road along Movie Road armed with a small map of the dirt roads leading through the amazing rock formations. The formations were marked with a series of plaques depicting where some famous Western movies have been filmed. We almost expected to see John Wayne swagger out from behind a rock. In mid-October Lone Pine hosts a film festival featuring some of the actors who starred in the local films.

About twenty-five miles south of Lone Pine, Highway 395 intersects with state Highway 190, leading over to Death Valley National Park. South on Highway 395 along the Los Angeles Aqueduct and the western edge of China Lake Naval Weapons Center, the landscape becomes volcanic. We took Highway 14, at the intersection of Highway 395, along the southern edge of the Sierra to Tehachapi where giant turbines take advantage of strong wind currents known as the “sierra rotor,” which swirl around the southern end of the Sierra to create electricity. While you’re in Tehachapi, be sure to see the famous Tehachapi Loop, completed in 1876. Still in use today, this is one of the seven wonders of the railroad world, an average of 36 trains per day pass over bridges and through a series of tunnels making a spiral loop with the engine eventually passing its own tail. Our camping choice while in this area was Red Rock State Park’s Ricardo Campground. The campground has 50 primitive campsites and a maximum motorhome length limit of 30 feet.

Tehachapi was the final destination on our tour of the Sierra, but we’ll be back and are already looking forward to our next trip, knowing there are many more secrets of the Sierra yet for us to find.