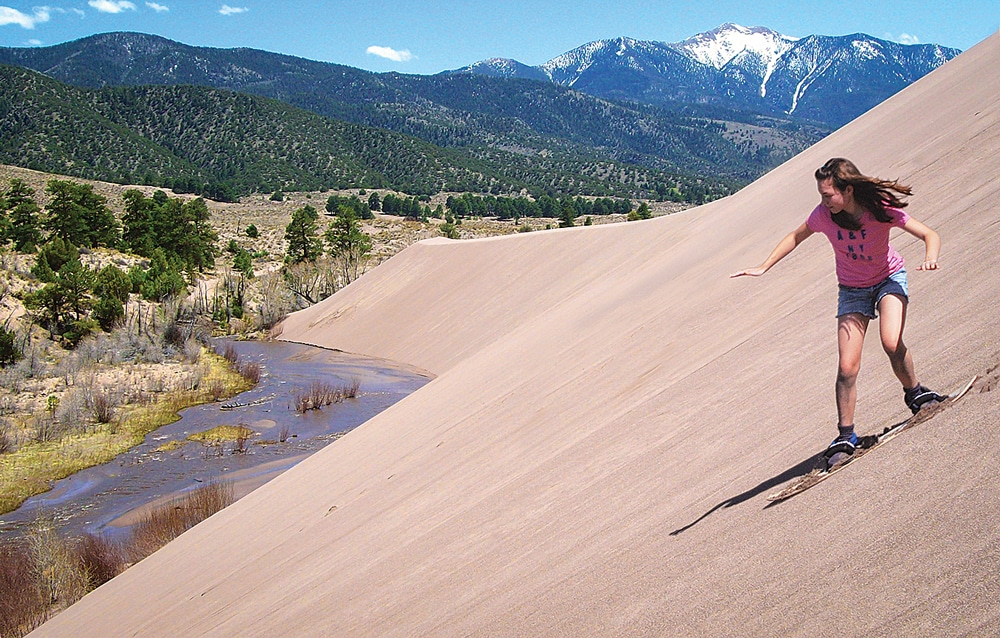 A peculiar yet incredible sight awaits the adventurous near the city of Alamosa, Colorado — Great Sand Dunes National Park and Preserve. While flat prairie and tumbleweeds bordered what seemed to be a road to nowhere, signs assured us that we were headed in the right direction as we turned off Route 160 onto State Route 150. In contrast to the flat San Luis Valley and lofty Sangre de Cristo Mountains, the sand dunes appeared small and insignificant at this distance. We could hardly wait to discover what made them so “great.”
Exploration would wait for the morning, as we settled in at Great Sand Dunes Oasis RV park on a rise in the foothills of the Sangre de Cristos. The panorama of the mountains, the dunes and the flat prairie was spectacular. As the sun began to set, its rosy glow reflected off the dunes in breathtaking beauty, progressing through changing shades of red with shifting shadows. Darkness arrived, howling coyotes called, and bright stars appeared in the black sky. In the distance, the lights of Alamosa looked like more stars settled on earth.

Sandboarders shred the dunes on the steep slopes above Medano Creek.

The Great Sand Dunes, about 38 miles from Alamosa, have been recognized as a national monument since 1932. In 2000 Congress expanded the area to protect the entire dune system. These 150,000 acres became Great Sand Dunes National Park and Preserve, with the dunes-only section named Great Sand Dunes National Park.
The main dune field is around 30 square miles (more than 19,000 acres) with sand dunes that are the tallest in North America. Star Dune rises 750 feet and is the seventh largest in the world. These dunes are unusual, but they aren’t unique. Similar dunes exist in other areas of North America, including Coral Pink Sand Dunes State Park in Utah, White Sands National Monument in New Mexico and Imperial Sand Dunes in Southern California.
The location of the dunes is essential for their formation. The San Luis Valley, approximately the size of Connecticut, is lodged between the Sangre de Cristo and San Juan mountain ranges. Geologists believe this valley was once covered by a huge lake that later receded due to climate changes, leaving a few small lakes. The sand that was left — what geologists call a “sand sheet” — makes up around 53 percent of the sand deposits and is stabilized by the root systems of grasses and shrubs. What remains of the smaller lakes today forms the sabkha wetlands, a salt-encrusted white plain covered by saltbush and salt grasses. Sabkha is an Arabic word for salt-crusted depressions common along the coasts of North Africa and Saudi Arabia. Even at these locations, sabkhas are typically bordered by sand dunes.

The dune area may look like a desert, but there is water just inches below the surface. Sand and water set the stage for the creation of the dunes. Add wind, and these three elements perform a well-choreographed dance. Wind blows the sand, made up of rounded fine-grained quartz, pumice, ash and lava, toward the mountains. Water carries it back down Medano and Sand creeks onto the sand sheet. The wind then blows it back from the sand sheet onto the dune field. The underlying wet sand helps the dunes keep their shape. During storms, the wind switches directions and blows the sand from the moun-­­ tains back toward the valley, adding to the height of the dunes.
Although the sand is constantly moving, when photos taken in 1874 and 1999 are compared, they show that the shape of the dunes has changed very little. The traditional Ute word for the dunes, sowapophe-uvehe, means “the land that moves back and forth.” What an ideal name for these shifting sands!
Along with their immense size and remarkable creation, the dunes have their own wildlife, most of which can be stepped over without being seen. Unique to the dunes are seven species of insects including the circus beetle. This six-legged performer will actually stand on its head when it becomes frightened. The Ord’s kangaroo rat is the only mammal that makes a home in the dune field. Squirrels, coyotes, deer, mountain lions and black bears live in the nearby mountains and drink from Medano Creek.
During late spring and early summer, the creeks flow as the melting snow on the Sangre de Cristo Mountains finds its way down the slopes. At this time, visitors may feel like they are at the beach and can wade and play in the water and even try tubing. In later summer, Medano Creek is more like a bubbling brook than a flowing river and can be crossed easily. The adventurous must be prepared for the heat, though. The National Park Service (NPS) reports that the sand can reach temperatures of 140 degrees Fahrenheit midday in the summer. Hats are recommended, and drinking water is necessary. Thankfully, according to the NPS, there are no scorpions, poisonous snakes or quicksand.
At daybreak, the dunes called us to explore. As we drove closer, they looked like they were growing larger. The title “great” no longer seemed unsuitable for these massive hills of sand. Only the dunes’ front facades were visible as we began our trek across the flat sand sheet, yet they extend for many miles beyond. The sand was fine, and heat waves rose in the bright sun. We felt like we were at the beach with the sand shifting under our feet, but there were no waves or cooling breezes here, 730 miles from the ocean. Nor were we at sea level. The base of the dunes is at an elevation of approximately 8,175 feet.
We believed that after a short stroll we would reach the base of the dunes but discovered that it’s difficult to accurately judge distances across the flat sand sheet or from dune to dune.

Families at play on Medano Creek, a seasonal stream that slows
to a trickle by midsummer.

As we walked along, we occasionally took a break and looked back to where we started our trek. Ultimately, we realized that we had covered some distance when we noticed other visitors on the sand sheet began to appear as tiny ants scattered near an ant mound.
The dunes are immense, their size breathtaking, and they seemed to grow larger still when we accepted the challenge and began to climb. After emptying sand from our shoes several times, we waited until the hike was over to remove the sand again. This may be one hike when cowboy boots would be the better choice of footwear.
Climbing the dunes is a challenge. For each step forward, the climber’s foot may slip three-quarters of a step backward. But the ascent is worth the effort. High Dune, only about 1 mile from the visitor center, is approximately 650 feet tall. Once the summit is reached, the view is spectacular.
The dunes extend almost as far as one can see.
When Zebulon Pike of Pikes Peak fame saw these dunes in 1807, his description recalled images of the ocean. “Their appearance was exactly that of the sea in a storm.” Pike described the view from the top of a tall dune perfectly — the countless dunes look like ocean waves flash-frozen during a violent storm. Visions of rolling and breaking waves, and swelling and surging seas come to mind. The magnificence of these sand dunes — not to mention the challenging climb — caused my breath to catch and my heart to swell.

As Connecticut natives, we were intrigued by the span of the valley between the Sangre de Cristo and the San Juan mountains, roughly the size of our home state. Such a wide expanse is not seen in New England.
Eventually, it was time to make our way back down the dune. Some explorers carry things such as snowboards or sandboards, sleds, skis and pieces of cardboard to slide down the dunes. For us, it was tremendously fun to run down. It felt like we were leaping in slow motion, weightless like an astronaut in space.
The sky was clear with a few small clouds when we visited. But climbing the dunes during a storm would be unwise. Lightning is a definite danger.
Incredibly, if lightning strikes the dune field, it can cause a fascinating phenomenon called a fulgurite. Fulgurites, sometimes called petrified lightning, are natural root-shaped formations with a glassy interior. To create these, lightning must reach temperatures of 3,270 degrees Fahrenheit. The average length of fulgurites is 1 to 2 inches, but they can be up to 30 inches long. If you are lucky enough to find one, the NPS asks that you leave it for others to enjoy.
Great Sand Dunes National Park and Preserve is definitely worth traveling to, even though it may seem like it’s on a road to nowhere. You may forget the geological aspects and the feel of sand-filled shoes, but you’ll always remember the experience of the climb, the view from the peak and the amazing creation of shifting sands.

Great Sand Dunes National Park and Preserve charges an admission fee of $3 per adult 16 years and older (free for children), valid for one week. The park’s $15 annual pass admits the pass holder and all family members in their vehicle for a year from the purchase date. The $80 America the Beautiful annual pass permits entry into all U.S. federal recreation sites (National Park Service, USDA Forest Service, Fish and Wildlife Service, Bureau of Land Management and Bureau of Reclamation) and allows access for the pass owner and up to three passengers.

888-275-8747 | www.store.usgs.gov/pass
To take a virtual tour of Great Sand Dunes National Park and Preserve during daylight hours, visit www.nps.gov/grsa and click the Weather/Webcam link on the right side of the homepage.

Sand-filled shoes are a memorable part of the adventure.

Great Sand Dunes Oasis in Mosca provides an awesome view of the dunes and the San Luis Valley. Open from April through the end of October, weather permitting, the privately owned RV park offers 20 campsites for $38 per night for two people. All sites are pull-through and are spaced widely enough apart for slideouts on two sides. Amenities include hot showers, a recreation room, laundry facilities and a dump station. Pets camp for free.
719-378-2222 | www.greatdunes.com

Piñon Flats Campground at Great Sand Dunes National Park and Preserve is 1 mile north of the park’s visitor center. The public campground opens April 1 and usually closes at the end of October. Forty-four RV sites can be reserved up to six months in advance on www.recreation.gov. Forty-four more sites are available on a first-come, first-served basis, serviced by a kiosk at the entrance. The nightly rate is $20. Some spots can accommodate RVs up to 35 feet, but longer rigs have difficulty turning corners and avoiding branches. There are no hookups, but restrooms provide sinks and flush toilets. A dump station and water are available during warmer months.
719-378-6395 | www.nps.gov/grsa