Selecting The Proper TV Products For Your RV 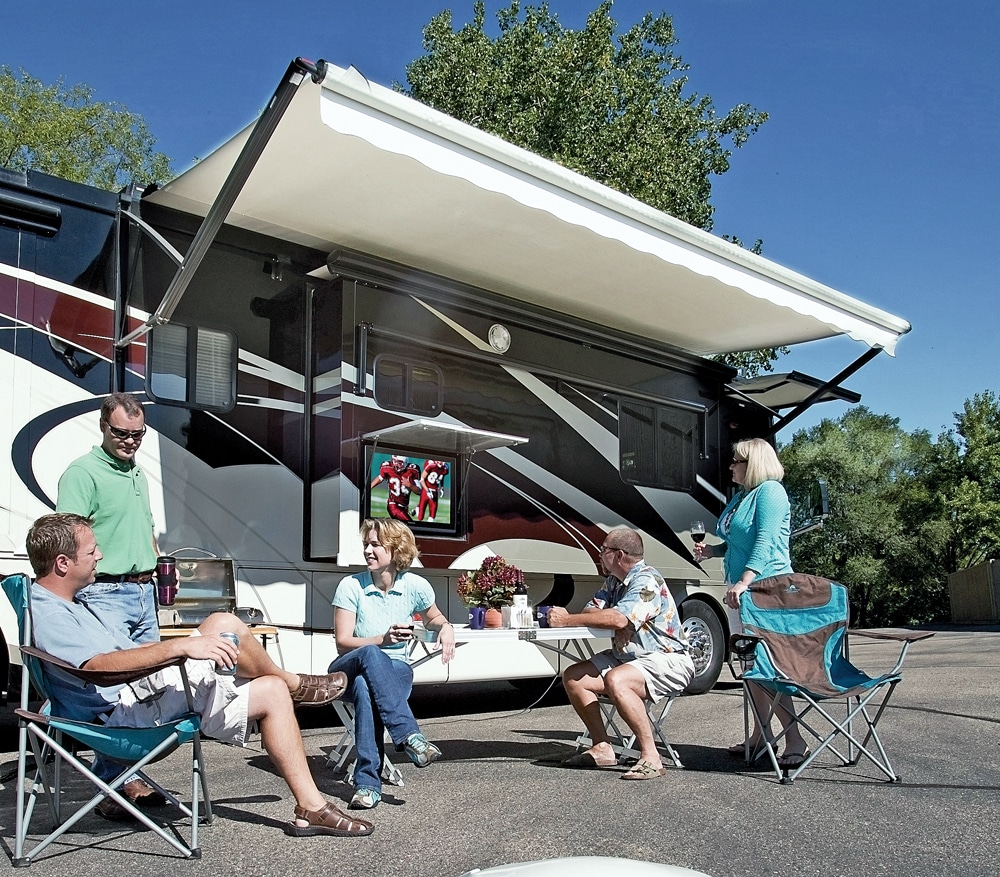 mon, we know you do it. Despite what we say to our friends and family or, especially, interested parties looking to join the ranks of RVers, most most of us have been guilty at one time or another, and we aren’t stopping anytime soon. It’s the dirty little secret of motorhoming, the lifestyle that so prominently bills itself as a great way to get outdoors, smell the fresh air and really connect with nature.

I’m speaking, of course, about watching TV (gasp!) at the campsite, or in the mountains, or even on the beach. After all, not everybody wishes to fight with biting insects, stifling temperatures and nosy neighbors while unwinding. And that’s perfectly fine. In fact, many RVs are designed around the fact that sometimes, after a long day of drinking in the majesty of the outdoors, many of us like to unleash our inner couch potato and catch a flick, or the evening news, or even the latest reality show.

There, don’t you feel better now?

Given that we still want to watch HBO (or ESPN, or CNN, etc.), it’s important to understand the different technologies that allow us to turn on the TV in our home away from home. Sure, you could always plug into the campground cable jack, but reception is often sketchy (and limited) and many times we find ourselves off the grid with nary a cable connection to be found. Then what?

Naturally, it starts with the antenna (for clarification, a satellite dish is also an antenna). Antennas come in all shapes and sizes, and can be permanent structures on your motorhome’s roof or even portable units you set up when you need them. Bat wing antennas are the industry standard; chances are your motorhome came with one. Bat wings must be adjusted from inside the coach in order to find the best reception; this is one drawback that sends many owners looking for alternatives.

An omni-directional dome antenna offers improved reception and doesn’t need to be adjusted. These are a bit pricier than bat wings, but many owners find that not having to maneuver their antenna from inside the coach is more than worth the extra cost.

Many antennas are designed to work only while the motorhome is parked (stationary units). This type of setup is prevalent among trailer owners, since nobody is in the trailer while it heads to its next destination. In-motion units are especially helpful for motorhome owners, as the passengers often watch TV in the living area (seat-belted, of course) while you ease on down the road.

As you likely know from your other home, programming is achieved through a satellite provider, such as DISH Network or DirecTV, both of which offer special packages to RVers that allow users to activate and deactivate their receiver box based on their travel schedule. In many cases, RVers don’t have to set up a separate account in order to do so.

Once you’ve determined which provider you’ll be using, you still have a few decisions to make before catching those “Seinfeld” reruns. Would you like HD programming? Are you interested in a DVR? Do you need more than one receiver? It’s best to write a list of exactly what you’d like before hitting the road; it could be difficult, or even downright impossible, to add features with no long-term address for the equipment to be shipped.

If it seems as though there are dozens of variables in setting up your motorhome TV, that’s because there are. Long gone are the days of plugging in a tube TV and choosing from 13 channels. Today’s TV offerings include hundreds of channels, in dozens of different specialized categories. That being the case, we’re trying to simplify some of the process by including many of our favorite products within these pages. Hopefully, the following will help get you on the right track and watching your favorite programs in no time.

King-Dome AIR antennas are multi-directional satellite domes that also receive over-the-air signals, meaning no provider is necessary (though you’ll always get more channels by subscribing to a provider). The Stationary Automatic 2200 Series ($1,299) allows users to park and begin viewing channels at the push of a button. The 3200 Series ($1,499) adds in-motion satellite acquisition, while the Premium in-motion 9762 ($2,299) operates even faster and offers the capability to support two receivers.

King-Dome’s JACK antenna ($159.99) is a bat-wing type digital broadcast device that includes a built-in amplifier for improved reception. The JACK also includes a built-in SureLock digital TV signal meter that displays the best direction to point the antenna before scanning for available channels. The SureLock feature is also available a la carte ($39.95) to add to your existing antenna.

The portable VuQube satellite antenna allows you to get reception anywhere, though you do need to provide a receiver and TV. The VQ1000 ($599) features a wireless remote for easy operation, and is completely self-contained in a weather-resistant enclosure. The Tailgater VQ2500 ($350) is a portable satellite antenna embedded with receiver technology that doesn’t require a separate power source. The Tailgater works exclusively with DISH Network and requires you subscribe to DISH programming.

The portable VuQube satellite antenna allows you to get reception anywhere, though you do need to provide a receiver and TV.

For those who don’t want their motorhome’s antenna to dominate its roofline, KVH offers the SlimLine Series multi-directional roof-mount antennas. The stationary R4SL ($1,299) and the in-motion R5SL ($1,399) are both just 12 inches tall and work with DISH Network, DirecTV and Bell TV providers. For single-cable installation, KVH offers the TracVision Series. The R6DX ($2,299) is an in-motion antenna compatible with DISH Network, while the R6ST ($2,149) offers the same functions but is compatible with DirecTV. Both can be used with multiple TVs. KVH’s crown-jewel, the TracVision A7 ($3,995) is only 5 inches tall, supports more than one TV and is an in-motion antenna. It is only available with DirecTV.

MotoSat’s HD Series TV System ($2,195) is designed to be compatible with programming from DISH Network, DirecTV and Bell TV and Shaw Direct satellite providers. The dishes work with MotoSat’s Nomad Series Controllers, which allow pushbutton “find-and-stow” operation for quick setup and take down. (The satellites fold down to just more than 10 inches tall when on the road.) There are four models of the stationary HD Series; which one you select depends on your satellite provider.

Also from MotoSat is the popular Executive Series (starting at $1,595), a stationary unit designed to work with all receivers (DISH Network, DirecTV and Bell Express Vu) and is available with an 18- or 24-inch dish. The dual output satellite is also powered by the Nomad Controller and folds down to 10 inches when not in use.

Winegard’s popular Sensar bat wing antennas feature a built-in amplifier designed to offer users VHF/UHF reception wherever they park their motorhome. The antenna can be raised, lowered and rotated from inside the coach. The Sensar IV ($159.99) amplified antenna integrates the UHF-enhanced Wingman antenna to capture even more programming. The Wingman ($29.99) is also available separately and is optimized to improve reception on digital and HDTV channels.

The newly redesigned RoadStar 3000 ($89.99) is an omni-directional antenna designed to support two receivers and to continuously find and acquire any available VHF, UHF and FM broadcast signals within a 35-mile radius of a parked vehicle. Plus, it is capable of receiving free over-the-air satellite programming from many major networks. Winegard also claims the 3000 series eliminates the need to manually aim and lock onto digital signals.

The newly redesigned RoadStar 3000 is an omni-directional antenna designed to support two receivers.

Winegard Trav’ler dish antennas are designed to view all satellites simultaneously. This may not seem like a big deal, but it is a major annoyance. Providers use more than one satellite for their programming. Most dual-output antennas require that viewers in separate rooms watch programming on the same satellite, which interrupts or altogether denies any viewing of programming not beamed on that particular satellite. Long story short, you want this feature. They are available for DISH Network, DirecTV, Bell and Shaw Direct. The Trav’ler SK 3005 Slimline ($1,899) is touted by Winegard as the only satellite antenna to offer full DirecTV HD programming.

RoadTrip roof-mounted antennas feature a scant 20-inch footprint and support two receivers. The RT 4000S ($1,199) is a stationary model that is 15.6 inches tall, while the RT 4000T ($1,499) is an in-motion unit measuring 12.9 inches tall. Both are from the Mission Series and are compatible with the major satellite providers. MiniMax antennas feature a 15-inch dome height and support two TVs, though single-satellite viewing is required in this case.

The GM-1518 Carryout Portable Satellite Antenna is a portable antenna that works with most receivers.

The GM-1518 Carryout Portable Satellite Antenna ($699.99) is a portable antenna that works with most receivers. It supports two TVs (on the same satellite) and is compatible with DISH Network, DirecTV and Bell. The Carryout weighs only 11.5 pounds and plugs in to a 12-volt DC outlet.