The geysers, hot springs and wildlife may get top billing, but hiking off the beaten path reveals some of the first national park’s most breathtaking sights

When visiting Yellowstone, the country’s first national park, you can see most of the notable sights without ever having to leave the Grand Loop Road. The famed road follows a 142-mile figure-eight pattern through the heart of the park and includes famous scenes such as Mount Washburn; Lower Yellowstone Falls, roaring over a 309-foot drop in the Yellowstone River; Mammoth Hot Springs’ travertine terraces; and Old Faithful, spewing streams of hissing hot water against a robin’s-egg blue sky. Then there’s the wonderment of nature untouched by mankind’s progress: bison lumbering along with winter brown shags clinging to thick middles and russet calves romping close to mama’s side; bear cubs climbing aspen saplings while protective mother bears forage for tasty treats; an elk bull sunning himself on a grassy shelf; and river otters playing at a clear stream.

Indeed, the world’s greatest collection of geysers, paint pots, fumaroles and hot springs adjoin the convenient parking lots that connect to the Grand Loop Road. However, the treasures hidden in the interior of the park require a bit more time and effort. By taking summer jobs in West Yellowstone, Montana, my wife, Arline, and I had the luxury of several days a week over four months to seek out the seldom-seen Yellowstone. Some of our treks off the Grand Loop Road were together; others were long, arduous day hikes I took into the park’s backcountry. 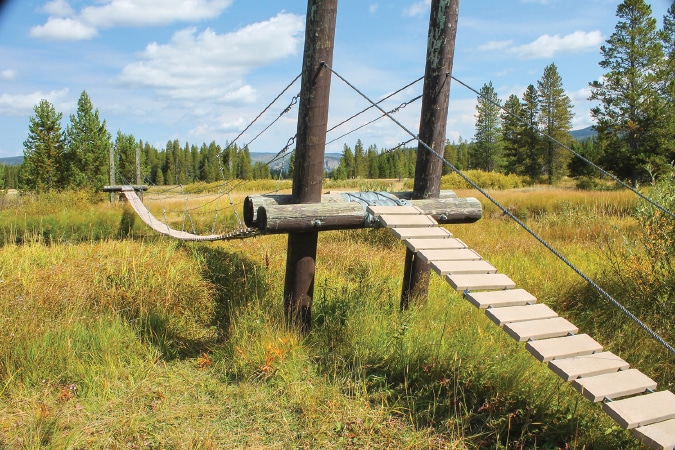 This suspension bridge aids hikers in crossing Bechler Meadow, on the way to a number of waterfalls, including Dunanda and Colonnade.

We walked the boardwalks at Midway Geyser Basin, but the rising steam from Grand Prismatic Spring obliterated the sapphire blue of the largest hot spring in the United States. We wanted more defining photos of the boiling blue pool, measuring 121 feet in depth. With research, we discovered a wide bike path leading from the Fairy Falls parking lot to a hill behind Midway Geyser Basin. Less than a mile down the path, a well-worn trail rises up the grassy hillside toward the tree line. Although numerous photographers had carved trails crisscrossing the hillside, I hiked alone, except for one French-speaking woman whom I photographed with the Grand Prismatic in the background.

On another day, we took the same trail, bypassing Grand Prismatic and hiking on to Fairy Falls. A relatively easy and popular hike, we had plenty of company along the trail. The less than 5-mile round-trip route is shorter than the two other options for hiking to the 197-foot waterfall, aptly named for its delicate beauty. On rocks at the foot of the falls, we sat mesmerized by the silvery strands of water falling over granite gray rocks. (Editor’s note: Due to renovations being made in the Grand Prismatic Spring area, some areas will be closed for the next one to two years. Hikers can access Fairy Falls using the Fountain Freight Road Trailhead located north of Midway Geyser Basin, but should be prepared for a much longer hike of 8.8 miles round trip rather than the usual 5-mile round trip.)

On another day, I ventured alone into the wilderness of Yellowstone from a trailhead at Golden Gate, approximately 4 miles south of Mammoth Hot Springs on the Grand Loop Road. My destination for the day: Osprey Falls, one of Yellowstone’s hidden jewels. At 8-plus miles round trip, the relatively moderate trail was my first journey into backcountry. The first 3 miles to Osprey Falls followed an abandoned Jeep road with gentle hills through woods and meadows. The last mile grew steep and narrow, dropping 800 vertical feet in switchbacks into the Gardner River Gorge.

Yellowstone weather is unpredictable. Although it was summer, a light, cold rain fell before I reached Osprey Falls’ splash basin. While setting up the camera and tripod, I discovered my special filters were missing – lost along the trail. To add to the challenge of getting a remarkable photo, the camera lens required drying between each shot. Yet, viewing the frothy water falling 150 feet into Sheepeater Canyon proved worth the steep climb and the dripping cold.

Gibbon Falls, located on the Gibbon River about midway between Norris Geyser Basin and Madison Junction, is one of Yellowstone’s most accessible waterfalls. A paved walk leading from a large parking lot affords views of the falls tumbling approximately 80 feet in a gradual descent. However, Little Gibbon Falls is another of those hidden gems, discovered on a hike along Wolf Lake Trail, accessed about 3 miles east of Norris Junction. We crossed the north edge of Virginia Meadows, carpeted with yellow buttercups. A few spots remained boggy from snowmelt, but the flat trail eventually turned upward to a hilltop view of Little Gibbon Falls, dropping only 25 feet in the Gibbon River below. Hiking this trail less traveled, we sensed the vastness of Yellowstone and the tranquil absence of civilization.

Still deeper in Yellowstone’s wilderness south of Old Faithful, trails leading to tall, forceful waterfalls called my name. I set my sights on the 265-foot Union Falls, second in height to the Lower Yellowstone Falls. To reach the trailhead, I drove 2 miles out the south entrance of the park and headed 10 miles east on a gravel road to Grassy Lake.

The trail to Union Falls is well-pounded with heavy horse traffic as atop a horse is the ideal mode for getting to the falls. But since I had no horse, fording the swift-moving, icy-cold Falls River with expensive camera equipment around my neck proved quite a challenge. The knee-deep ford is about 1 mile into the 16-mile round trip. Up-and-down hills create a moderate hike. Lodgepole pines, unspoiled by the devastating fires in 1988, grow from cracks and crevices of the stony hillsides along the path. The roar of Union Falls reached my ears at least a mile before I discovered horses hitched at permanent racks, waiting for their riders.

Horsemen descended the last hill as I climbed to the overlook, leaving me to stand alone in the awesome beauty of Union Falls, so named because two creeks unite and fall like a veil over the symmetrical conical shape of tall rocks.

When we read in a guidebook that Cave Falls is visible from a car, we wondered why it wasn’t a more popular daytrip. We understood once we traveled west from Montana into Idaho and turned south. The Grand Tetons loomed as a backdrop along our route until we turned east onto Cave Falls Road – a bone-jarring, potholed, 10 miles of dirt and gravel through a national forest. We recommend leaving the motorhome behind and traveling in the dinghy vehicle. Once we entered the southwest corner of Yellowstone, the asphalt started again. We continued a one-way loop, and Cave Falls filled our Jeep’s windshield. Only 20 feet in height, Cave Falls is the widest waterfall in Yellowstone, stretching 250 feet across the Bechler River. 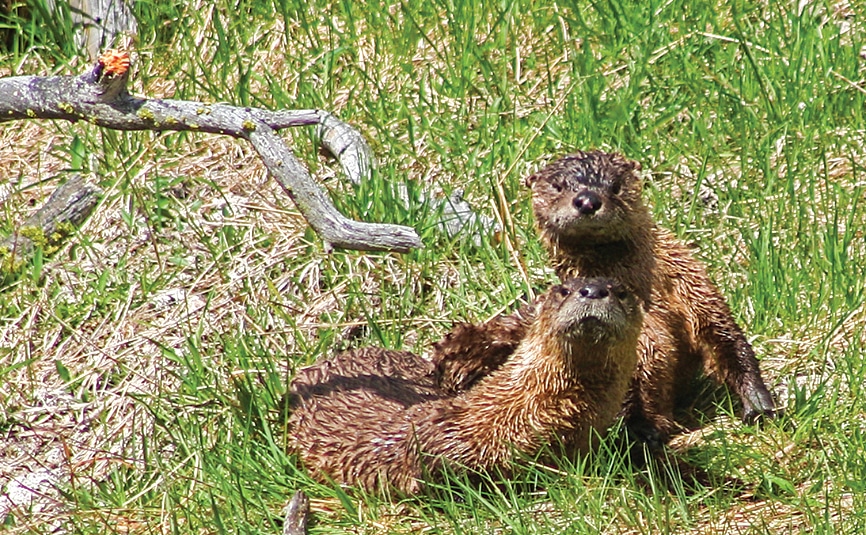 The northern river otter (a member of the weasel family) is active year-round in Yellowstone.

We drove to the end of Cave Falls Road and took an easy 3-mile wooded hike along the Fall and Bechler rivers. The confluence of the two rivers in a heavily wooded setting rivals the celebrated status of better-known scenery in the park. Approximately as tall as Cave Falls, though not as wide, Bechler Falls has a petite, quiet prettiness, contrasting with the roar of Union Falls.

I ended my summer hiking with separate trips to Dunanda and Colonnade falls, each more than 8 miles one way. Retracing the route over the rough section of Cave Falls Road, I started from the Bechler Ranger Station in the southwest corner of Yellowstone.

Bechler Meadow was the tricky part for both of these hikes. This trek is not for everybody, and is best left for more advanced hikers. The guidebook warned that the meadow could be under a foot of water in late July, so I saved these trips for early September. But a strong rain had re-energized the fields.

The going was slow, and required wading, slogging in mud, fording thigh-deep creeks and rivers, and crossings on improved, unimproved and improvised log bridges. I even crossed one Indiana Jones-style suspension bridge, though I was relieved to see that the planks were new.

A quarter-mile short of Dunanda Falls, I scrambled down a steep side path to photograph Silver Scarf Falls, a 250-foot sloping cascade. Continuing on to Dunanda, the path offered only a view looking down on the falls. The hillside was steeper to negotiate, especially with camera gear. My tripod resisted leveling and my left leg slid downhill. In Shoshone, Dunanda means “straight down,” and the name is befitting of the 150-foot drop.

On the way to Colonnade Falls, accessible via a different trail through the meadow, I viewed the upper half of Ouzel Falls above the treeline, from about 2 miles away. Ouzel is a 235-foot sloping cascade on Ouzel Creek. A side trip fording the Bechler River and forging through underbrush to find Ouzel would have kept me from reaching my vehicle before dark, so I had to take in its beauty from afar. In fact, all of my long hikes flirted with dusk. I had to opt for Ouzel captured with a telephoto lens. 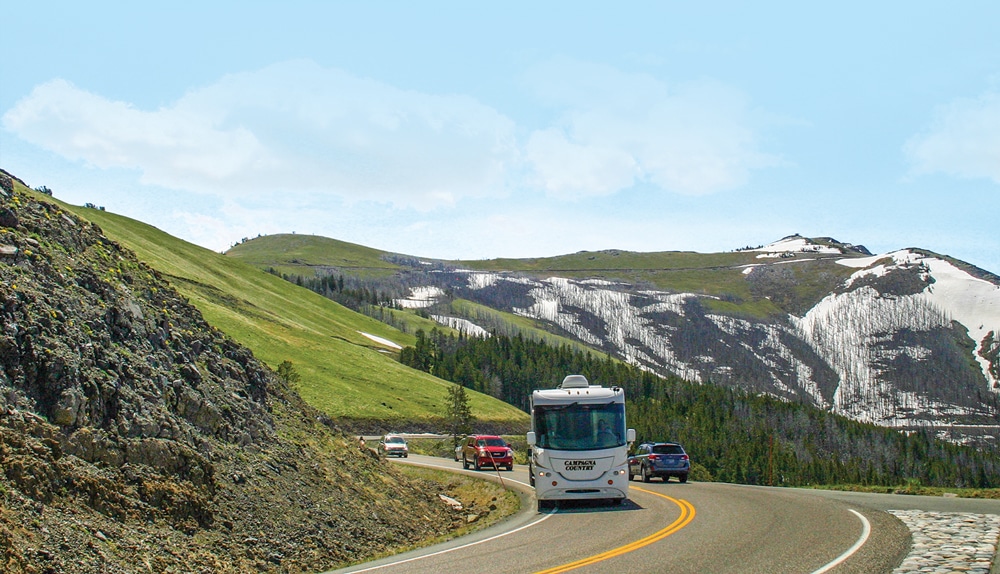 Mount Washburn sits at the top of Dunraven Pass, at an elevation of 10,243 feet.

Once I reached an overlook for Colonnade Falls, I didn’t have to cling to the steep hillside, but wriggling around for a perfect camera angle proved hazardous. No guardrail protected me from a nasty drop into the Bechler River. At a little more than100 feet, Colonnade is not the tallest waterfall in the park, but its double falls makes it worth the journey.

In one summer of exploring seldom-seen Yellowstone, we experienced but a fraction of the treasures hidden throughout the 2.2 million acres of the national park. One could explore Yellowstone for a lifetime, but we settled for all we could see beyond the Grand Loop Road in one memorable summer.