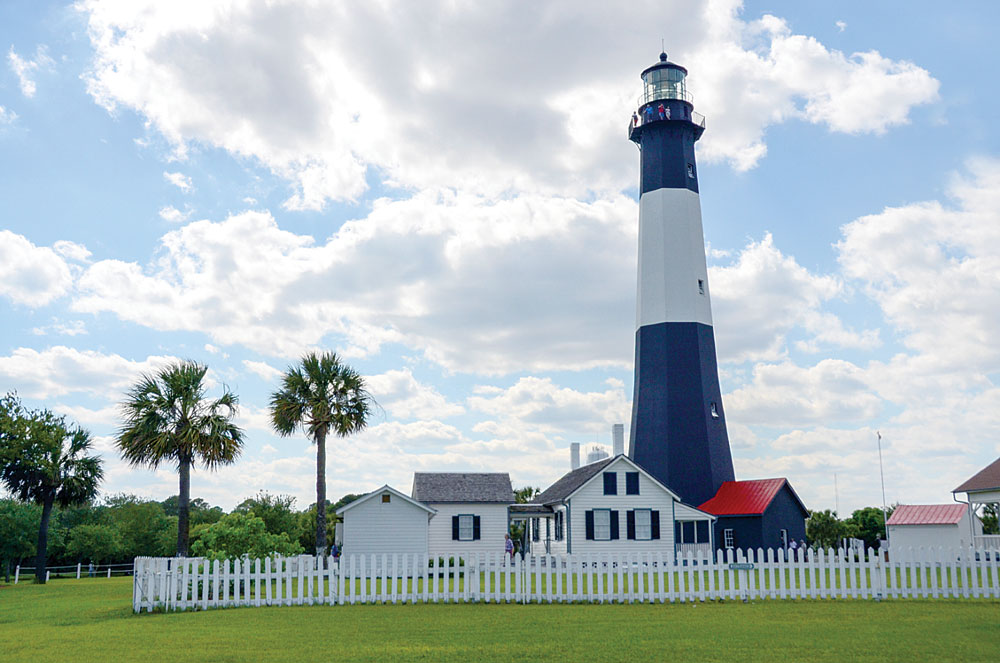 Steeped in history, antebellum beauty and architectural treasures, Georgia’s oldest city begs to be explored on foot and by trolley

I had never eaten a mountain of seafood until lunch at The Crab Shack, a casual alfresco lunch spot en route to Tybee Island on the outskirts of Savannah, Georgia. The platter was as big as the tabletop on which it rested, and heaped with boiled shrimp, crab, mussels, crayfish and chunks of sausage and potatoes. Gorging on local seafood was but one of the many delightful experiences we had in the spring on a two-day stopover in the Savannah area while traveling up the East Coast.

A visit to Savannah (population: 144,352) has been perched atop my bucket list for more than a decade. When my husband, Jack, and I finally got there, the oldest city in Georgia far exceeded our expectations, not only for its coastal cuisine but also for its historical sites, friendly locals and the beach on Tybee Island. Savannah makes a point of fully immersing visitors in its heritage and hospitality.

In 1732, British General James Oglethorpe, a member of Parliament and an advocate of prison reform in England, laid out Savannah a year before King George II sent him to the New World to create a haven for debtors and misfits and a military buffer between Spanish Florida and British colonists in South Carolina. Oglethorpe’s blueprint for Savannah was based on a pattern of 24 “squares” — parks, gardens, cemeteries and other pedestrian green space — of which 22 survive today. The 2.2-square-mile original town is now one of the largest National Historic Districts in the United States.

Although the old city is a lovely place to walk when you’re wearing cobblestone-friendly shoes, we opted for a trolley tour the first morning to get an overview of the place. The trolleys ran constantly and allowed ticketholders to get on and off at will. They also provided unexpected entertainment.

“Hey, y’all! I’m Abel Clayton,” announced the Confederate soldier who bounded aboard our trolley at Forsyth Park. “Did you notice how the memorial in Forsyth Park faces north? It faces the enemy! The statue was made in Canada, then delivered by sea, so it wouldn’t be contaminated by touching Yankee soil.” With that, he leapt off the trolley, leaving us to contemplate who was friend and who was foe at various periods in Savannah’s long and colorful history.

Shortly after the Confederate soldier encounter, the trolley driver slowed to point out a cast-iron downspout in the shape of a dophin on the side of a building. The 18th-century sailors who crisscrossed the Atlantic Ocean believed dolphins were good luck. As an extension of that belief, they put dolphin-shaped downspouts on their homes to keep evil spirits out, but dolphins offered little protection from pirates. 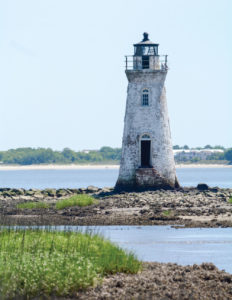 “Hey, y’all!” hiccupped a drunken pirate, as she stumbled up the trolley steps. “Bet you didn’t know the Pirates’ House is the oldest building in the state of Georgia. Yup. It is. It was built for the gardener who tended the peach trees here, but he didn’t last (chuckle). Couldn’t hold his liquor (hic).”

The Pirates’ House was to our right, a modest gray building that looked preserved but weathered and well used. The pirate explained, between chugs on her bottle, that the Pirates’ House was an inn of ill repute that hosted seamen and the less savory elements of early Savannah society. Many sailors mysteriously disappeared after a night at the inn’s pub, some undoubtedly into an underground tunnel, of which Savannah has many.

Savannah’s tunnels were built during the 1800s to hide bodies during yellow-fever epidemics and for escaping slaves as part of the Underground Railroad. The tunnel in the basement of the Pirates’ House purportedly led to the Savannah River and was used to smuggle illegal rum into the city or unsuspecting sailors out of it. When a sailor passed out in the tavern, he was chained, then dropped into the cellar. Later, he either awoke on a ship to Asia, enslaved, or was murdered.

“The ghost of Captain Flint walks the halls at night,” continued the pirate, slurring her words and leering at us, “If you don’t believe me, why don’t you come inside?” She turned, motioning for us to follow, stumbled down the trolley’s steps, then lurched toward the Pirates’ House, as the trolley rambled away.

Flint is a character in Robert Louis Stevenson’s 1883 novel Treasure Island, one of dozens of bestsellers set, at least in part, in Savannah. Midnight in the Garden of Good and Evil, by John Berendt, is another. The 1994 novel tells the true story of the shooting death of Danny Hansford, a local male prostitute who worked as an assistant to Savannah mansion restorationist Jim Williams. Williams killed Hansford in the Mercer-Williams House on the southwest end of Monterey Square. Lover’s quarrel, premeditated murder or self-defense?

As the trolley driver paused in front of the brick Italianate mansion to speculate, Jack and I stepped off the trolley to explore more of old Savannah on our own. 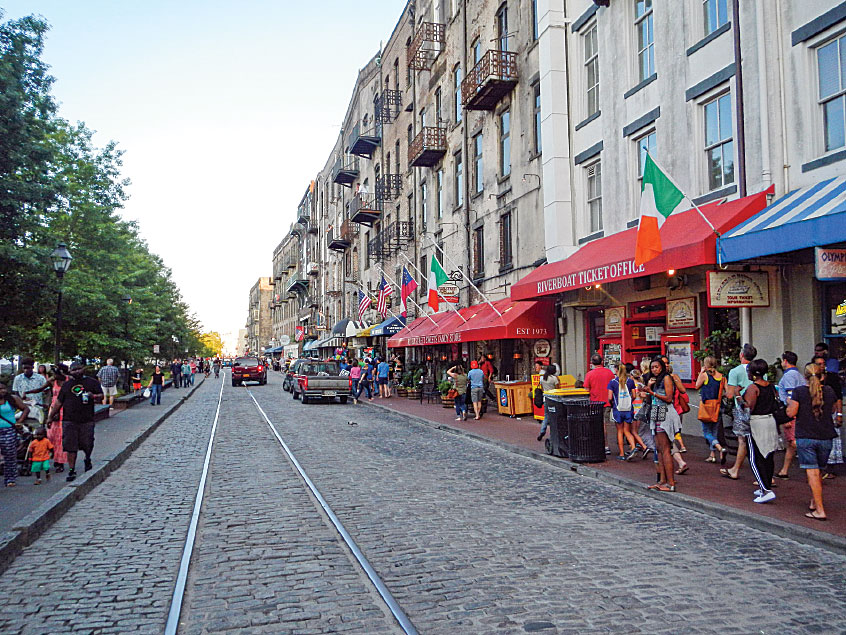 With Monterey Square at our back, we headed north on Bull Street toward the Savannah River. One of the first stops of the trolley tour had been Chippewa Park, which we revisited, this time on foot. A 9-foot statue of General Oglethorpe dominated the center of the park, facing south “toward the enemy” — in his case, the Spanish.

From the imposing statue, we wandered to the side of the park where the Independent Presbyterian Church caught our eye, its stark white steeple in contrast to the azure sky. President James Madison attended the church’s dedication in 1819. In 1885, future President Woodrow Wilson married the granddaughter of the church’s minister there, but I recognized the church as the backdrop for one of my favorite movies, Forrest Gump. In the movie, Gump sat on a bench by the church, reminiscing about his life over a box of chocolates, as a feather drifted down from the steeple.

From the church, we drifted as well, stopping here and there to examine other landmarks and eventually reaching the gold-domed City Hall. From there, we walked down a steep cobblestone street past the old Cotton Exchange. Interestingly, the rocks that paved the street were from cargo ships’ ballasts, left behind after the ships were loaded with cotton for their return trip to Europe.

Multiple iron walkways crossed over the cobbled descent. During the pre-Civil War cotton-growing era, factors (brokers) used these walkways to access the exchange where they negotiated the sale of cotton crops for their plantation-based clients.

Below the cotton exchange, River Street was a happening place, a mix of eateries, boutiques and souvenir shops housed in a line of restored waterfront buildings. Hungry from our walk, I slipped into River Street Sweets, a sizable candy store, lured by the pecan treats in the window and the free samples inside.

Afterward, we poked in and out of small shops and vendor booths, as several large ships cruised down the broad river. The ships reminded me that Savannah has always been an important port city and commercial center of the south and remains so today.

The next day, we headed to Tybee Island, just outside Savannah, hoping for a leisurely day at the beach. Tybee is the easternmost point in Georgia. It was renamed Savannah Beach in the 1950s but reverted to its original moniker 20 years later. I never did put on my bathing suit. There was too much to see, starting, ironically, at the beach.

The day we visited Tybee Island coincided with the Savannah College of Art and Design Sand Arts Festival. Students, alumni and faculty compete annually in this creative sand-sculpting event in five categories: Sand Castles, Sand Sculptures (at least 3 feet tall), Sand Relief (less than 3 feet tall), Wind Sculpture (artistic structures that “engage the wind”) and Best Underwater Creature (real or make-believe). We spent most of our time at the beach gawking at these intricate works of sand art, including a smiling Cheshire cat, a sexy mermaid and a 6-foot-long lobster.

After walking among the sand sculptures, we got more exercise and another dose of history climbing to the top of the Tybee Island Light station. The 154-foot-tall tower was built in 1773 and is the oldest and tallest lighthouse in Georgia. By contrast, we also visited the smaller, 46-foot-tall and more isolated Cockspur Island Lighthouse near Fort Pulaski, then ventured into the fort itself.

Southern Belle
Easy to reach from interstates 95 or 16, Savannah is a good place to visit year-round, although the weather can be hot and humid. Springtime is the season for sand flies, known locally as sand gnats. These biting pests are best deterred with insect repellant containing DEET.

Named for Casimir Pulaski, a Polish nobleman and military commander who is credited with founding the U.S. Cavalry, Fort Pulaski is a mammoth structure believed to be impenetrable until the invention of rifled cannon fire during the Civil War. The fort’s significance in the history of warfare and its live cannon demonstrations caught Jack’s attention, but the man for whom the fort was named intrigued me more.

At the recommendation of Ben­ja­min Franklin, Pulaski emigrated to North America to help the American cause during the Revolutionary War. He is credited with saving George Washington’s life during the Battle of Brandywine and then becoming a general in the Continental Army. During the Battle of Savannah, he was mortally wounded and died shortly afterward.

Following our tour of Fort Pulaski, now a national monument, we returned to the riverfront in Savannah to watch fireworks and listen to live music. River Street and the adjacent ribbon of waterfront park were packed with people. I wanted so dearly to find a place to sit after a day on my feet, but every possible spot was taken.

I turned to find a young man gesturing to me to take his seat on a park bench. Grateful, I accepted, as Jack went to look for some fried chicken and sweet tea (sugar-sweetened iced tea), two of Savannah’s culinary specialties. Sometimes called the Hostess City of the South, Savannah certainly rolled out the red carpet for us in many endearing and delightful ways.

Savannah is a cocktail-friendly city. Most watering holes have plastic cups by the door so you can bring your drink with you on the city streets without using a glass container. 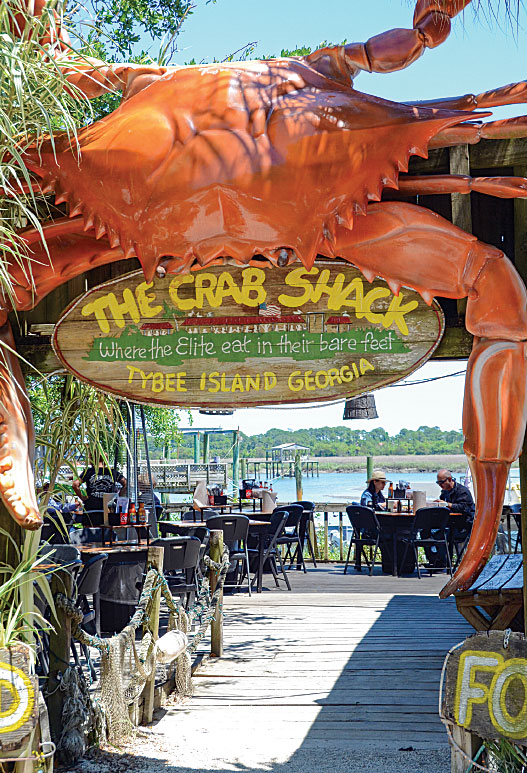 The Crab Shack: This backwater-fishing-camp-turned-seafood-hotspot, created by husband and wife charter boat captains, is where “the elite [over]eat in their bare feet.” www.thecrabshack.com

Crystal Beer Parlor: A speakeasy that became one of the first places in Savannah to serve alcohol after Prohibition. It now serves wine, spirits and a broad selection of specialty burgers and other fare. www.crystalbeerparlor.com

Flying Fish Bar and Grill: Casual lunch spot near Fort Pulaski that dishes up four versions of mahi sandwiches (grilled, blackened, fried or in buffalo sauce). Bring in your fresh-caught fish to have them cook it. www.flyingfishsavannah.com