Santa Cruz River Valley Has It All 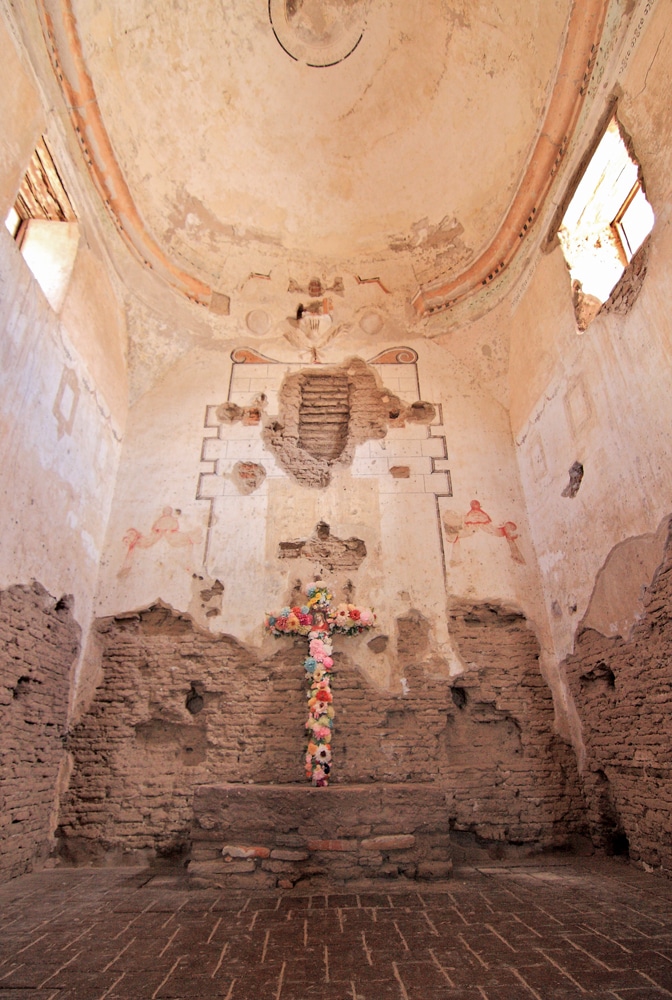 There aren’t many places in the United States where you can have reasonably good weather any time of year. Or how about a destination where you can be comfortable in February, not fry in July and the humidity won’t make you feel like you’re snorkeling in your motorhome? That destination is the Santa Cruz River Valley in southern Arizona along Interstate 19 that runs from Tucson to the Mexican border at Nogales. And regardless of when you visit, you’ll find opportunities to immerse yourself in history, indulge your wildest shopping desires, swing those golf clubs and sample an abundance of restaurants.

One of the true attractions of the I-19 corridor is that it’s not purely a winter destination. Winters are comfortable; while snow may coat surrounding mountains, it rarely falls in the valley and the daytime temperatures are moderate. Nighttime temperatures can drop below freezing. Summers are warm, but not nearly as hot as Phoenix, or even Tucson. The difference is the I-19 corridor gradually slopes upward to the south from Tucson until Nogales; you are close to 4,000 feet in elevation.

We appreciate destinations that tap into the rich history of our land; Santa Cruz River Valley is such a destination.

In 1691, Jesuit Father Eusebio Kino traveled up the valley to a Native American village known today as TumacÃ¡cori. Near that village, Kino established a mission that ministered to the natives until the 1840s. In 1692, Kino traveled farther north, establishing a mission at the village of Bac, just south of modern Tucson. Eventually, churches were built at both locations, but in 1767, the Spanish king, fearful of Jesuit intrigues, had expelled the Jesuits from Spain and its colonies. A few years later, missionaries of the Franciscan order took over the pioneering work of the Jesuits. The work of Father Kino and later of the Franciscans is commemorated in two churches, each constructed around 1800 by the Franciscans.

The better known is San Xavier del Bac, the White Dove of the Desert, which is on the San Xavier reservation just south of Tucson. It has been the subject of art and photography for years, and is still an active parish for the Tohono O’odham people. Visitors are welcome, but if services are taking place photography is not permitted in the church.

The other is the quiet and empty church at TumacÃ¡cori, which has been a National Historical Park since 1908. Neither San Xavier del Bac nor TumacÃ¡cori were ever fully completed. Both feature unfinished bell towers, which some believe were purposefully left incomplete because under Spanish rule no taxes would be paid on a building until it was complete.

The sun casts a shadow over TumacÃ¡cori while the white dome of the church stands out against the sky. Photo David H. Smith Photography

TumacÃ¡cori is open year-round. The brooding church with haunting remnants of original painted decorations and remaining outbuildings along with a museum can be toured with the aid of a guidebook. A lovely garden calls to mind the gardens planted by the missionaries. We recommend joining a volunteer- or ranger-led tour.

At the town of Tubac, just north of TumacÃ¡cori at the edge of Coronado National Forest, you can meet another of the great historic figures from the Spanish era. Juan Bautista de Anza is honored as the founder of the great city of San Francisco, Calif., in 1775. However, much of his earlier life was spent as a warrior, protecting the thin threads of Christianity and Spanish civilization against a native population outraged by the brutality of priests and soldiers.

One of Tubac Presidio Museum’s many exhibits showcases the area’s ranching history.

After a rebellion by the natives, a presidio, or fort, was erected at Tubac. Anza was appointed commander in 1767, and it was from the presidio that Anza left to form his settlement along San Francisco Bay. The man Anza left in charge at Tubac wasn’t up to the task of keeping the peace, and finally, the presidio was moved to Tucson, which offered better defenses. Tubac Presidio State Park, Arizona’s first state park, showcases the history from the days of the Spanish presidio to modern times. The presidio itself rests in buried foundations that preserve the remaining adobe blocks; a staircase leads to an underground viewing area.

Vivid in color and unique in design, artwork is displayed in shops and along streets throughout Tubac.

But there’s more to the Tubac area than history – it’s a shopper’s paradise. Artists, many with international reputations, work here in iron, pottery, jewelry, oils and watercolors and just about any other medium you might imagine. In addition, Tubac’s location close to the Mexican border allows importers to offer a wide variety of Mexican art and goods, a real benefit for RVers not wanting to travel in Mexico. In fact, you have to be careful or you might end up buying more than your motorhome’s storage bays can hold.

Tubac artists have embraced Mexico’s love of color, and their metalwork and pottery are almost outrageous in their brilliance. This color carries over to the clothing merchants as well, with their stunning collections of skirts, jackets, hats and accessories.

Several restaurants make their homes in Tubac and range from upscale dining opportunities to more casual options. As you’d expect, being near the border, a number specialize in Mexican cuisine, but others follow their own drumbeat. Elvira’s used to be a prime Nogales, Mexico, destination. With the increase in security at the border, the owners moved Elvira’s to Tubac where it continues to attract crowds.

In addition to the considerable attractions of Tubac, the area is appealing to golfers who will find several highly regarded courses clustered around the town of Green Valley. Legendary crooner Bing Crosby was among the founders of the Tubac Golf Course, and the courses at Rio Rico also attract golfers.

A view of the gardens at TumacÃ¡cori.

Birders will find Madera Canyon near Green Valley to be a world-class destination boasting many resident species usually found farther south in Mexico. Other worthwhile birding habitats can be found at Patagonia-Sonoita Preserve and at Lake Patagonia State Park on State Route 82 going east from Nogales.

Along the northern stretch of I-19, you can retrace the footsteps of early miners. American settlers such as Charles D. Poston were attracted to the area by the possibility of silver, but until the last Apache war chief, Geronimo, surrendered in the 1880s, any such search was risky. Although there were pockets of silver in the hills surrounding the valley, copper ultimately became the mineral of choice. As you travel along I-19, you can see massive tailing piles from still-active open-pit copper mines to the west.

At the southern end of I-19 you can sample a bit of old Mexico. It’s easy to walk throughout the tourist area of Nogales, Sonora. To us, it is quite similar to Tubac with all manner of shops and restaurants. Prices are mostly in dollars, not pesos. You can drive, but parking on the Sonora side is problematic and lines getting back into the United States are lengthy and slow. If you cross the border, carry your passport or passport card with you, or you won’t be able to re-enter the United States.

Other activities in the area include hiking, exploring ghost towns and sampling the products of some of Arizona’s best winemakers near the town of Elgin. RV parks ranging from basic to resort status can be found in Nogales, Amado and Green Valley. In addition, there are numerous parks with all levels of amenities in Tucson at the north end of the I-19 corridor. Regardless of how long your stay lasts, we guarantee you won’t regret a visit to Santa Cruz River Valley.