San Antonio Travel: Beyond the Alamo 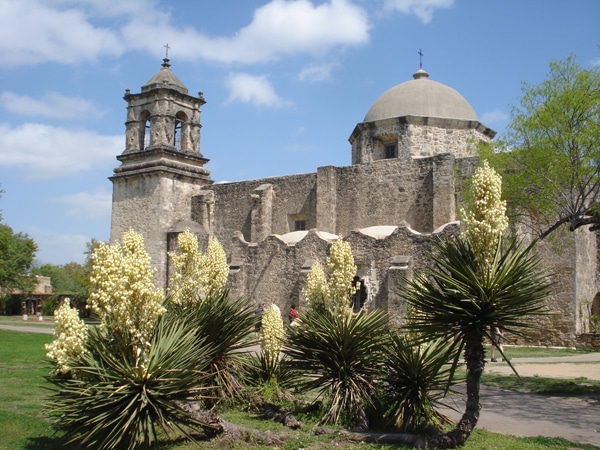 Ask any well-seasoned Texas traveler about first impressions of San Antonio and the response is invariably “The Alamo and the River Walk.” While these two San Antonio staples are definitely worth the trip to southwest Texas, there’s much more to this picturesque town than a historic mission and riverside gastronomical delights.

For RVers who wish to stay more than a day or two in San Antonio, the city offers a wide variety of interesting attractions — from its chain of remarkable missions to its stately King William Historic District to the outrageously delightful Buckhorn Saloon and its lush botanical gardens and historic forts.

After the Alamo, perhaps the most tourist-worthy attraction in the San Antonio area is its string of Spanish missions, which date back to the early 1700s. The original mission — Mission San Antonio de Valero (today’s Alamo) — was established by Franciscan friars in an attempt to convert indigenous hunters and gatherers into Catholic tax-paying citizens of New Spain. Later, a number of additional missions were created to further the cause, including Missions San José, San Juan Capistrano, Conceptión and Espada. Today, managed by the National Park Service, these missions still stand as a reminder of early Texas history and picturesque monuments to the past.

The Alamo isn’t the only historic building in town.

The Mission San José y San Miguel de Aguayo, located a few miles south of downtown, is particularly impressive and includes an imposing limestone church and extraordinary Spanish colonial Baroque architecture and statuary. A highlight of the church is its rose window, known as the premier example of Spanish Colonial ornamentation in the United States. However, its sculptor and significance continues to be a mystery. The additional missions, roughly spread out along the San Antonio River, are almost equally impressive, and stand in varying degrees of romantic decay. They are currently undergoing major renovations.

For further historic perspective, it’s worth a trip to Fort Sam Houston, which is located just a few miles northeast of downtown San Antonio. Two sites await you here — the Fort Sam Houston Museum and the legendary Quadrangle. Although this is an active U.S. Army base under the tight security of similar bases across the country, visitors with a valid I.D. (a driver’s license will do the trick) are more than welcome.

The changing displays at the San Antonio Botanical Garden are sometimes subdued, sometimes exuberant, sometimes humorous, but always worth checking out.

The Fort Sam Houston Museum tells the history of the base and the U.S. Army in the San Antonio area from 1845 to the present. Fort Sam Houston, one of the oldest Army posts in Texas, is designated as a National Historic Landmark and has more than 800 historic buildings within its boundaries. The museum is free to the public and housed within its confines are examples of the uniforms and equipment from each period of the fort’s history. The Quadrangle is a walled fortification within the base and played host to the imprisonment of the Indian chief Geronimo in 1886. The Quadrangle also features historic cannons, workshops, support buildings, storerooms, offices, the uniquely-designed Vidales Sundial and more. And don’t miss the Quadrangle animals — deer and fowl have graced these grounds for more than a century.

Heading back downtown, San Antonio visitors should not miss one of the city’s gems, the Buckhorn Saloon and Museum and the Texas Ranger Museum. Billed as “The Oldest Saloon in Texas,” the Buckhorn features more than 40,000 square feet of amazing collectibles. These range from 520 species of animals (stuffed) from around the world (when game hunting was more popular), a world-record 78-point buck in the Hall of Horns, a deer portrait made up entirely of rattlesnake rattles, plus the Mysteries of the Deep, a Wax Museum of Texas History, and much more. Located just two blocks from the Alamo, the Buckhorn also features its legendary saloon, complete with café, and the Texas Ranger Museum displays an early history of the Rangers, Tales of the Texas Rangers, and the authentic Ranger Town.

Around the corner from the Alamo, take time to visit the historic Menger Hotel and stop by the bar where Teddy Roosevelt recruited men for his famous Rough Riders unit. Within walking distance from the Menger are a number of interesting downtown sights, including the charming and artistic village of La Villita, the Majestic and Empire Theatres, the Torch of Friendship, the Children’s Museum, and of course, the Alamo.

A short drive — or long walk — south of downtown will bring you to the King William District. This District has a wealth of stately and historic San Antonio homes, impressive gardens, distinct restaurants, bygone-era ambiance, and more, all set on the banks of the San Antonio River. A stroll through King William’s streets is indeed a step back in time.

For nature lovers, a trip to the San Antonio Botanical Garden, located just north of downtown, is well worth a day trip to enjoy beautiful blooms, exotic plants, and a hike along the Texas Native Trail. In addition to its lush gardens, the site includes a number of restored historic houses, including the Schumacher and Auld Houses, and a 1850s hand-hewn post oak log cabin. A 1-acre lake further sets the tone for this symphony of plants and color.

The former Pearl Brewery along the River Walk is now a culinary gathering place.

Naturally, San Antonio’s attractions don’t end with missions, historic districts and buildings, and lush scenery. There’s a wide variety of things to see and do in the city. Some additional great spots include the Brackenridge Eagle Miniature Train Ride, the San Antonio Zoo, San Fernando Cathedral, McNay Art Museum, Natural Bridge Caverns, and Natural Bridge Wildlife Ranch. Visitors to San Antonio will find a wealth of interesting sites to visit, with something to see for all ages.

Second- and third-time visitors to San Antonio may very well remember the Alamo, but they’ll never forget the city’s enduring charm and wealth of sightseeing opportunities.