Safari Condo Raises the Roof on the Alto R-Series 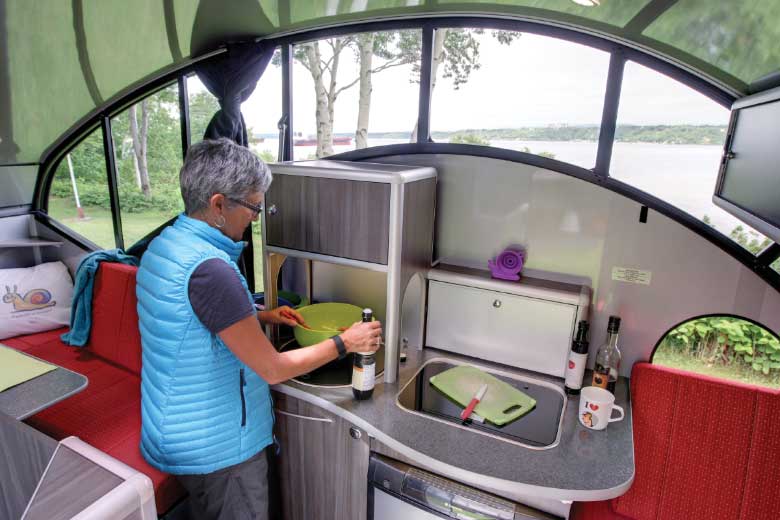 Based in Quebec, Safari Condo offers a unique 17-foot, 3-inch travel trailer that’s available to the U.S. market. The lightweight, rounded-body Alto R-Series has a seamless-aluminum retractable roof that is opened and closed with the push of a button by a pair of electric linear actuators. Within minutes, the 7-foot-tall (exterior) trailer is transformed into an 8-foot, 5-inch-high light-and-bright oasis-on-wheels for the true outdoor lover, with crescent-shaped tinted-tempered-glass windows lining both sides. With the roof retracted, the refrigerator, toilet and beds are accessible.

Let there be light — and lots of it — with the retractable roof on the Alto R-Series from Safari Condo. The two models sport independent Flexiride suspension and claimed dry weights under 2,000 pounds.

Two Alto R-Series floorplans are available with self-containment features that include 15-gallon freshwater and 11-gallon black and gray holding tanks, a fixed-flush toilet, a dinette and sleeping for three. The R1713 has a 72-by-76-inch bed that can be converted into two beds, and the dining area transforms into a 36-by-81-inch bed. The R1723 has a 60-by-76-inch bed, a convertible dinette and a curtained-off interior shower.

If you’re interested in an Alto, plan ahead, because the wait time is approximately 18 months, as each Alto is built to order. At this writing, base MSRP in U.S. dollars was just under $30,000, which includes the $750 brokerage fee to transport the trailer across the border.

Trailer Life Managing Editor Donya Carlson grew up camping with her family in Southern California and loves spending time hiking, mountain biking, motorcycling, snowboarding and just about anything else outdoors. Before joining the Trailer Life and MotorHome team, she served as managing editor of Rider, a magazine for motorcycle enthusiasts.