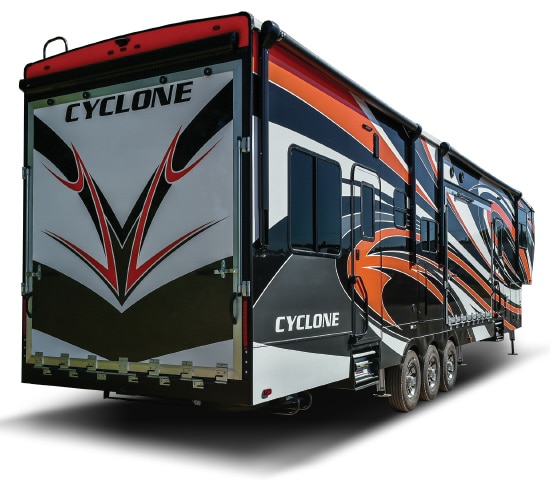 The RV Experience, or RVX, an industry and media show that took place in Salt Lake City in March 2019, promised to energize the RV community by showcasing emerging trends and cutting-edge models. A special event, the Reveal, highlighted 47 innovative new RVs competing head to head. In five of the nine categories, the consumer-focused panel of judges awarded towable models the top spot. Here’s a snapshot.

A rolling playhouse for grown-ups, the 44-foot Heartland Cyclone 4270 is ready to party with a 13-foot garage and 30-gallon fuel station, a bar-style kitchen counter and a 50-inch 4K TV. Beyond the ramp-door patio, the massive fifth-wheel has a second deck on the side that sets up with the touch of a button. Gross vehicle weight rating (GVWR): 20,000 pounds. MSRP: $111,373. Heartland called its tricked-out RVX Reveal entry the Cyclone Ultimate Tailgate. The one-of-a-kind toy hauler aimed to impress with a built-in beer fridge, an inflatable hot tub, a wall of four TVs across from the overstuffed sofa, more flat-screens in the garage and outside, and an over-the-top sound system with eight subwoofers and 18 speakers. www.heartlandrvs.com

The 43-foot Forest River RiverStone 39RBFL goes big with five slideouts, a king-size bed and a claimed 3,121-pound cargo-carrying capacity. Designed for extended living, the luxury fifth-wheel has all the comforts of home, starting with his-and-her sinks in the master bathroom and a midship half bath with a stacked washer and dryer. Convertible sofas in opposing slides and a couch with theater seating afford views of the 60-inch LED TV. The screen drops down behind a large electric fireplace for enjoying the scenery through the big windshield in the redesigned front cap. High-end standards extend to a second fireplace and LED TV in the bedroom, an 18-cubic-foot refrigerator with an icemaker, a dishwasher, induction cooktop and Truma AquaGo hot-water system. GVWR: 19,065 pounds. MSRP: $107,004. www.forestriverinc.com

A big bunkhouse with a homey feel, the Jayco Eagle HT 264BHOK packs in many features a modern family might want. With sleeping space for up to eight, the new travel trailer offers a master bedroom with a residential queen bed in front and a separate entrance, and double-over-double bunks in the rear. The lower bunk flips up to create a storage bay for gear like bikes and kayaks, accessible from a rear door, and a pass-through storage compartment holds more goodies. Measuring just under 33 feet, the 264BHOK feels like a high-end fifth-wheel but at a fraction of the size and cost. GVWR: 9,995 pounds. MSRP: $47,896. www.jayco.com

Tailored for outdoor enthusiasts and all their toys, the 21½-foot SylvanSport Vast puts a number of RV innovations to good use. Up front, the indoor/outdoor kitchen slides outside under the awning to reveal a good-size shower inside. Modular seating in the rear transforms to a queen-size bed, and a second queen bed on a power lift lowers from the ceiling. With the beds and seating in travel mode, bikes and other toys stow in the rear through a large hatch. Side-mounted exterior rails transport kayaks, canoes and SUPs. GVWR: 3,000 pounds. MSRP: $49,995. www.sylvansport.com/vast

Making it easy to stay in touch, Airstream Classic travel trailers have dedicated 4G LTE connectivity, a high-gain Wi-Fi booster and a hotspot that can connect up to 10 devices. With the addition of Smart Control Technology, Airstream ups the ante, bringing smart-home convenience to the campground. Phones or tablets running the mobile app can operate the trailer’s lights, vent fans, air conditioning and electric awnings, and keep tabs on battery voltage, LP-gas, freshwater and holding-tank levels. The 31-foot, 3-inch 30RB and 33-foot 33FB come with a queen bed or two twins, along with all the amenities and elegance expected in an Airstream. GVWR: 10,000 pounds. MSRP: $152,400/30RB, $166,900/33FB. www.airstream.com/travel-trailers/classic

One of the concept RVs that generated media buzz at the RVX show, the matte-black Venture RV Sonic-X prototype travel trailer rolled down the runway with lightweight carbon-fiber body panels, a solar-backed lithium battery bank and an innovative freshwater-harvesting system. An RVX Reveal runner-up in the City Escape category, the one-of-a-kind Sonic-X was built on the bones of a Sonic 220VRB and beefed up with torsion axles, off-road tires and 22 inches of ground clearance. www.venture-rv.com/sonic-x 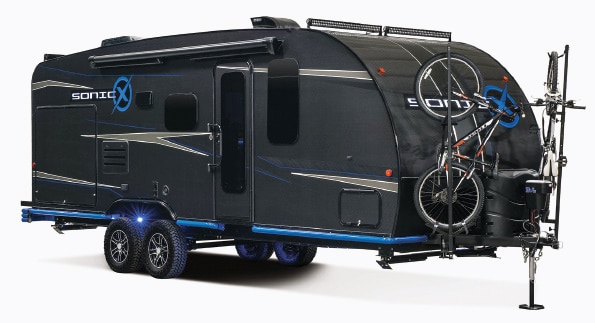