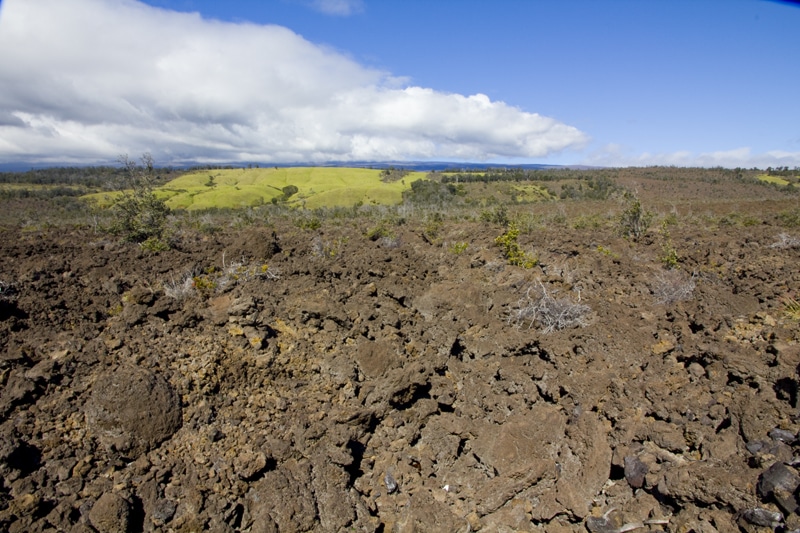 It is surprisingly warm early in the morning as my friend, Vicky, and I stroll along Crater Rim Trail flanking Kilauea Volcano’s smoldering Halema`uma`u Crater in Big Island’s Hawaii Volcanoes National Park.

Viewed through a smoggy veil of sulfurous gas and steam, Kilauea is this day living up to its reputation as Hawaii’s most active volcano. It has been continuously erupting since 1983. You’ve undoubtedly witnessed its periodic lava flows on the evening news, sliding relentlessly down the volcano’s southern slope, or pali, engulfing everything in sight along its 36-mile course to the sea.

Last year, a spate of earthquakes rattled the region, reactivating a surface flow of lava from Pu`u`O`o crater in the park’s southeast corner, which on March 5, 2011, sent molten lava crashing over the last home standing in the one-time residential development of Hawaiian Gardens. These seismic tremors have also  boosted the volume of gas and steam emitting from a vent in Halema`uma`u Crater. They’ve stirred up the crater’s lava lake bottom as well, producing a vivid orange glow clearly visible at night from viewing areas along Crater Rim Trail and the Jaggar Museum.

Periods of increased volcanic activity greatly enhance the Kilauea visitor experience, but also present some potentially serious risks. Volcanic gas and steam can deliver dangerous levels of sulfur dioxide, which can cause heart and respiratory problems, especially among those diagnosed with such deficiencies, the young, elderly and pregnant women. An experienced corps of National Park Service rangers and interpreters maintains a constant vigil over geologic and weather conditions and capably control access to potentially risky trails and roadways throughout the 230,000-acre park.

During our visit, for example, Crater Rim Drive, which under normal conditions allows visitors to drive around the five-mile-wide Kilauea caldera, was temporarily closed because portions of it were shrouded in gaseous fumes owing to shifting wind conditions. Our trek along the 11.6-mile Crater Rim Trail, which began at the trailhead near the Kilauea Visitor Center, was blocked as well after little more than a mile (at Trail Stop 10, approaching Waldron Ledge Overlook) for the same reason as the road closure. We realized, as all visitors should, the danger of ignoring such warnings. Still, we were able to view quite a lot of the wondrous and enormous caldera and its fuming Halema`uma`u Crater.

We hiked back to the Visitor Center – a must-stop for park exhibits, displays and up-to-the-minute trail/road access information – and drove a short distance to Jaggar Museum, which stands on the caldera rim just above Halema`uma`u Crater. Named after scientist Dr. Thomas Jaggar, who came to Kilauea in 1912 and devoted his life to the study of the volcano, this is where we really gained some understanding of the geologic wonderland before us. The place is loaded with displays, interactive exhibits and real-time feeds of instrumented readings of volcanic activity taking place just beyond the museum doors. Admission is free.

Our next move, a drive down the 18-mile Chain of Craters Road, which tracks historic lava flows down Kilauea’s eastern flank to the sea, was thwarted as well thanks to road repairs, which reduced traffic to a single lane. Growing impatient with our stop-and-go progress and ready for lunch, we backtracked to Volcano House, the park’s only dining and lodging facility, located across from the Visitor Center. But, alas, it was closed for renovation. It was becoming clear to us that our timing for a park visit wasn’t the best. Our situation reminded us that Mother Nature is clearly in charge here and we humans had best take heed and pay homage.

For native Hawaiians, including Vicky, homage is precisely what is paid in these parts to the legendary (outsiders might say mythical) goddess of the island’s volcanoes, Pele. This capricious female deity, pictured with flowing raven-black hair, is believed to reside somewhere within the fiery inferno of Kilauea and is viewed by natives as responsible for volcanic activity.

Driven now by serious hunger pangs, we hustled off to Volcano Village, a rustic residential and commercial center on Highway 11 just beyond the park entrance that serves as home to many park employees. Kiawe Kitchen was the first eatery to catch our eye and proved a good choice, serving up a tasty lunch of pastrami sandwiches and Caesar salads.

Our three-day Big Island camping adventure had originated earlier in the morning in nearby Hilo, Big Island’s capital and largest city, where we’d arranged the rental of a vintage 1987 VW Westfalia camper van from Happy Campers. I’d owned a couple of the venerable Westys in my earlier years, and the opportunity to again get behind the wheel of one of the compact little campers seemed a given choice, not only from a nostalgic standpoint but for the Westy’s suitability in negotiating the island’s mostly narrow, two-lane roads.

Our immaculately preserved and maintained Westfalia – with its name, Kila Kila Kai (meaning majestic ocean), emblazoned on its rear side windows – is one of a fleet of 15 of the popular pop-top camper vans, mostly from the 1980s, offered by Happy Campers. This enterprising mom and pop – or rather mom and son – operation is the brainchild of Teri Kelli and sons Cody and Jake. The Kellis, a family with a long-time affinity for the compact and cleverly designed Westfalias, presented Kila Kila Kai spotlessly clean, ready to go and fully stocked, right down to bedding, pots and pans, and beach towels; a complete package and quite a good value for the daily rate of $125.

To read more about this trip to Hawaii’s Big Island, find the July issue on newsstands, or subscribe!