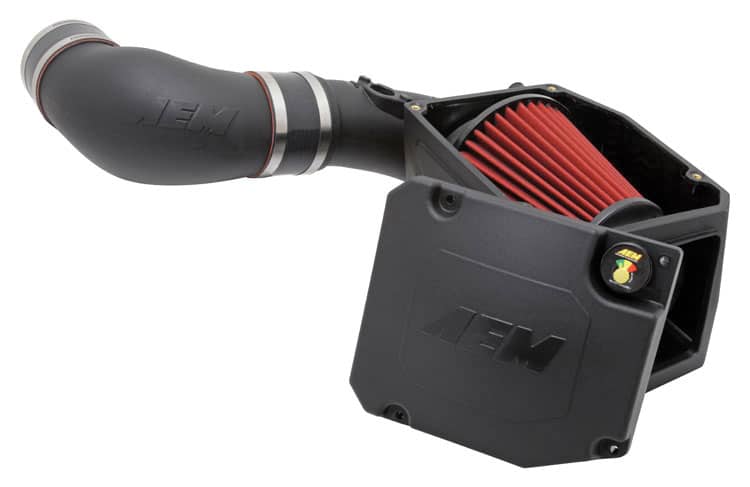 No matter what tow vehicle you drive, one common denominator many of us share is that secret wish for just a little bit more power. It doesn’t matter whether you’re driving a new or old pickup and hauling a lightweight trailer, a heavy fifth-wheel or a truck camper. Having a few more ponies under the hood always inspires a certain level of driver confidence and superiority.

Gaining power from an engine isn’t rocket science. Gas or diesel, an engine is just an air pump.

Get more air and fuel into it, and performance increases. It’s as simple as that. The limiting factor with today’s computer-controlled engines is finding ways to improve air and fuel flow while staying within the working parameters of computerized engine management systems and regulations for vehicle emissions.

On the gasoline side, performance products that improve airflow through the engine are predominately grouped around the air-filter system and exhaust side. Aftermarket cold-air intake (CAI) kits can improve airflow over a factory setup by providing less-restrictive piping and placing the air intake in a more desirable location to get the coldest air.
Performance CAIs usually come with a larger filter and/or filter material that allows more flow than the typical stock replacement. When upgrading the CAI on gas and diesel engines, it’s not uncommon to see power gains from 10 to 20 horsepower.

Flowing more air on the exhaust side is easily accomplished by replacing restrictive exhaust manifolds with headers that suck exhaust out of each cylinder in the most efficient manner possible and swapping factory catalytic converters and “cat-back” exhausts with ones that are larger in diameter and freer flowing yet still emissions-compliant.

If one is really intent on improving power, modifications to the internals and injection system are necessary. Among the most popular are aftermarket camshafts and superchargers that help flow more air and fuel. Such products require a high degree of mechanical skill to install and a bigger monetary investment than simply bolting on a CAI or aftermarket exhaust in one’s garage.

Turbo-diesels have a wider latitude of power improvers because, in addition to the turbo(s), they have nearly three times more piping than a gasoline engine. They also have a much broader operating range in the air-fuel ratio than a gasoline engine. Flow more fuel into a diesel and pack more air into the intake manifold, and it’ll make considerably more power than it would in stock form.

To make your quest for a little more towing power easier, we’ve compiled a list of products designed to boost later-model (2010 and newer) pickup and SUV gas and diesel engine performance. Most are 50-state legal; those that don’t meet that requirement are identified below. Taking advantage of such upgrades can help turn that wish for more pulling ponies into reality.

AEM claims 2011 to 2012 GM Duramax HDs can gain 14 horsepower and more torque with the installation of the Brute Force Cold Air Intake, which replaces the restrictive stock air filter and intake housing. The CAI uses a tuned and dyno-tested aerodynamic tube and housing to hold a washable, oil-free air filter that’s said to be good for 100,000 miles between cleanings. MSRP: $554.29.

The Momentum GT Intake System can add up to 16 horsepower and 18 lb-ft of torque to 2014 to 2016 6.4-liter Hemi-powered Ram 2500/3500 trucks, according to aFe. This CAD-designed CAI system is roto-molded from a heat-resistant, cross-linked polyethylene material to ensure the coolest air-intake charge available and a filter-to-housing interface for a perfect fit. MSRP: $480. 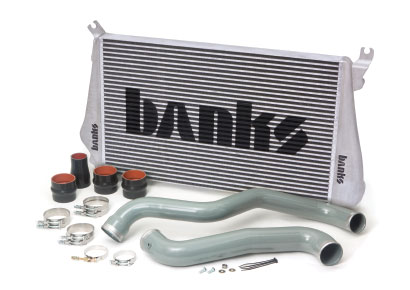 The Techni-Cooler Intercooler with Boost Tubes improves power, durability and fuel economy by increasing air density and minimizing loss of boost between the turbo and intake manifold on 2011 to 2016 GM 6.6-liter Duramax HDs. It’s bigger than stock in every respect, from boost tubes to the core to the all-aluminum end tanks. Intercoolers are also available for Ford and Cummins. MSRP: $1,595.

The Ram-Air Cold Air Intake System has an aerodynamic shape that eliminates restrictions and a filter that flows more freely than the stock version. Enclosed housing keeps out hot air while inhaling cooler, denser outside air. Installing the appropriate kit on the 2011 to 2016 6.7-liter Power Stroke can increase air-intake flow by 26 percent for increased power, better fuel economy and reduced EGT. MSRP: $369. 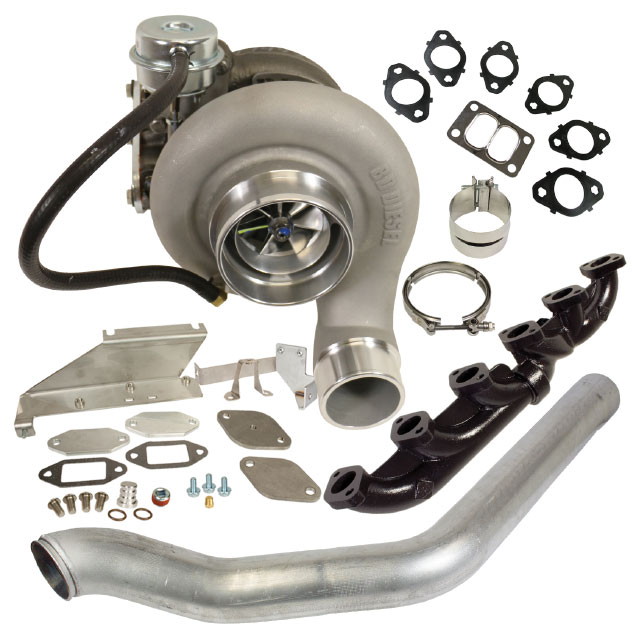 BD Diesel is known for offering a range of 48-state-legal Turbo Kits designed to provide more power while keeping towing EGT down by delivering ample air to the supplied fuel flow. Featuring BorgWarner turbos, kits cover Duramax, Cummins and Power Strokes through 2018 and come with all the parts needed. MSRP: From $1,600.

More power in diesels means more heat, and that places a bigger load on the cooling system. Billet Water Pumps replace the stock units on 6.0/6.4-liter Ford engines, and come with upgraded bearings and an all-billet impeller that replaces the plastic stock version. MSRP: From $334.95.

H-Core EGR Coolers, like this 6.7-liter Cummins version, are designed to eliminate fatigue and heat-related stress fractures that cause factory coolers to fail. The interior tube design and TIG-welded external seams allow the cooler to survive more heating/cooling cycles. MSRP: $1,545.

Upgrading the factory turbo compressor wheel on 2011 and newer Ford 6.7-liter and Duramax engines can be one of the biggest improvers for faster throttle response, higher turbo boost, improved fuel economy, more horsepower and reduced EGT. The Wicked Wheel 2 billet compressor wheel is claimed to produce up to 60-horsepower gains in some applications. MSRP: From $259.

Nothing kills a diesel faster than fuel contamination. The Fuel Filter/Water Separator from DieselSite provides protection from such a catastrophe for the 6.7-liter Ford. Fuel goes through a pair of 2-micron filters, and a low-pressure drop forces water out of the fuel. LED lights on the dash-mounted indicator inform the driver when filters need to be drained and changed. DIY installation is said to take 20 minutes. MSRP: From $699.

The Delta Boost Performance Tuner for Ford’s 3.5-liter EcoBoost is a simple way to gain up to 32 horsepower and 50 lb-ft of torque. The 49-state-legal module installs in-line with the boost sensor in the factory harness. It’s controlled by a downloadable Bluetooth app. MSRP: $347.99.

If you tow with a 5.4-liter 2004 to 2010 F-150 and need more power, Performance Exhaust Headers are designed to increase torque, resulting in improved towing performance. The 82630-series headers feature mandrel-bent 1½-inch-diameter primary tubes for optimum exhaust flow and a claimed precise fit to ensure easy installation. MSRP: From $550.

The Stage 1 Holset XR Turbo for 2007.5 to 2012 6.7-liter Cummins engines is a replacement turbocharger upgraded with a larger, more efficient 60mm billet compressor wheel with seven extended-tip blades and a slim-nose design to increase airflow. The upgradeis claimed to add 30 to 50 horsepower, lower EGT and improve throttle response. MSRP: $2,850.

The Ford Super Duty Cold Air Intake for 2017 and newer 6.7-liter engines is an easy upgrade to make more air for more usable power and acceleration. The kit, which is not legal for sale or use in California, directs cooler, denser air through a custom-molded air-intake tube into the engine’s throttle body, adding 11.4 horsepower. MSRP: $346.99.

The Ram Cold Air Intake replaces the restrictive factory air filter and air-intake tubing while retaining the stock air box. K&N claims the kit improves throttle response on the 2013 to 2015 6.7-liter Cummins and gives it up to a 14-horsepower increase. MSRP: $410.99.

stalling the GM Cold Air Intake on 2017 and newer HD 6.6-liter Duramax engines can gain more than 15 horsepower. The mandrel-bent aluminum-tube air-induction system dramatically reduces airflow restrictions. Some K&N 77-Series air intakes are not legal for sale or use in California and other states adopting California emission standards, while others are 50-state legal. MSRP: $339.99.

The 6.6-liter Duramax LML Intercooler Kit includes everything needed to improve airflow and boost pressure, and decrease air-charge temperatures in 2011 to 2016 GM trucks at any power level. Like the Cummins Intercooler, the Duramax direct drop-in replacement hasa lifetime warranty. MSRP: $1,575.

Positioning the filter intake box behind the front air inlet, the Power Stroke Cold Air Intake for 2017 to 2018 6.7-liter diesels in Ford Super Duty trucks flows nearly 60 percent better than the stock version, according to S&B. Power Stroke and Ram kits are not legal in Califor-nia and states adopting California emission standards. MSRP: $329.

CP4 high-pressure injection pumps are the Achilles’ heel of the 2011 to 2016 Duramax LML engine because of the potential for failure that can take out the entire injection system. The CP3 Conversion Kit includes the hardware necessary to replace the CP4 and is said to require no tuning changes. MSRP: $2,500.

Ford 6.7-liter Power Strokes are also known for CP4 injection-pump failures. Although it can’t keep the CP4 from failing, the CP4 Disaster Prevention Kit reroutes the pump bottom-end flow back to the tank and filters it to prevent debris from getting to the rest of the system and requiring expensive replacement of injectors, rails and lines. MSRP: $360.

The 49-state-legal TIG-welded Intercooler Charge Pipe Kit improves airflow through the intercooler, improving power and lowering EGT in high-stress uses such as towing. Hot- and cold-side pipes are available together or individually for 1999.5 to 2017 Power Stroke, 2004.5 to 2012 Cummins and 2011 to 2016 Duramax engines. MSRP: From $199.

EMISSIONS REGULATIONS
Staying smog-compliant isn’t difficult with the types of modifications mentioned here, as long as the aftermarket products are exempt or meet federal and/or California Air Resources Board (CARB) certification requirements for the state in which your vehicle is licensed. Such exemptions and certifications are usually spelled out clearly on manufacturers’ websites and in published product information.

TIP
To maximize the power potential of performance-enhancing bolt-ons, match up a 50-state-legal programmer, such as the Banks Power Six-Gun, Superchips Dashpaq, or Edge Evolution CTS2 or EvoHT2 (pictured), to make the appropriate timing and fuel-injection rates.