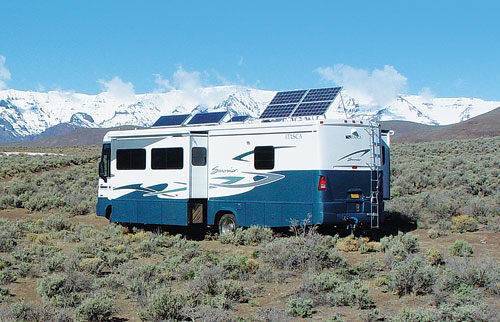 Ever dreamed of freeing yourself from noisy campgrounds, hookups and the ever-present hum of someone’s AC generator, all while your RV still has power? To camp wherever you want, for extended periods, without sacrificing anything, and do so without enlarging your carbon footprint? Well, you can do it with solar power.

Unlike an AC generator, a solar-power system has no moving parts, makes no noise or smell and requires little maintenance. It can be cost-effective in the long run and a solar system can be sized to suit your needs, whether that’s just keeping a single battery charged or maintaining a large battery bank for running all the modern conveniences of a large fifth-wheel.
A basic RV solar-power system consists of one or more solar panels to generate charging current, a charge controller, batteries and ancillary components such as brackets, mounting hardware and wiring.

There are three basic commercially available types of photovoltaic material: amorphous silicon, monocrystalline silicon and polycrystalline silicon, the latter two being most common. The cells have a positive and negative side. The middle, where electrons are held, is called the P-N junction. When light strikes the surface of the cells, the electrons become excited and begin generating pure DC (direct current) electricity. The number and size of the cells that are connected in series control the amount of voltage and amperage created. Each cell has a potential voltage of about 0.5 volt, so roughly 1 volt is produced per two cells in series.

According to the crew we talked to at AM Solar, you’ll need a minimum of 36 standard cells in series to develop enough voltage to fully charge a battery. AM Solar uses a custom-made 100-watt RV100 solar panel with 40 cells producing 20.8 volts in its installations. That may seem like a lot of voltage to charge a 12-volt battery, but there are factors that affect output (such as the intensity of the sunlight, amount of shade, cell temperature, angle of sunlight, etc.) that must be compensated for.

A charge controller’s purpose is to prevent the solar panels from overcharging the batteries, and although features vary depending on the controller and its manufacturer, there are two basic methods for regulating the charge current: series regulation and shunt regulation.

A shunt controller regulates the charging of the batteries by short-circuiting the solar panels, thereby interrupting the charge current. A blocking diode is required between the batteries and the switching element to prevent the batteries from shorting when the solar panels are shunted. This control strategy is commonly referred to as an “On/Off” controller, as it will push the batteries up to a preset regulation point and then turn off. It then waits for the batteries to fall to a pre-set reconnect voltage, and switches back on.

The shunt controller is an older strategy that works reasonably well, but the techs at AM Solar think it has some serious drawbacks. For example, shunt controllers rarely, if ever, reach full charge and can either boil off water in the battery or sulfate the battery plates depending on the controller’s set points. By contrast, a series controller with pulse-width modulation uses a series element that is switched on and off at a variable frequency with a variable-duty cycle to maintain the battery at the voltage-regulation point. In plain English, that means it will charge the batteries up to a preset voltage-regulation set point, then taper off the charging current from the solar panels, rather than switching it off completely. This strategy maintains the highest state of charge with the least amount of water consumption.

Batteries
To begin with, you want a deep-cycle battery for your RV, not a typical automotive starting battery. A deep-cycle RV or marine battery can withstand repetitive discharges of up to 50 percent or more and still continue to provide its rated capacity after hundreds of cycles. This characteristic, combined with more reserve capacity, makes deep-cycle batteries ideal for use in an RV application.

Reserve capacity in your RV battery is the primary consideration, and you can get more by going bigger and/or using more batteries. Note that we didn’t say “adding” batteries. Adding new batteries to older ones in a system will severely shorten the life of the new batteries. If you’re going to add battery capacity, go with a completely new set of batteries.

Many RVs have more than one house battery, and if they suit your needs already, you may choose to go with direct replacements when the time comes. But if you need more power, you can upgrade to bigger batteries, if they’ll fit. You’ll want batteries with the highest amp/ hour (ah) rating that is available.

For those with more demanding power needs, adding 12-volt batteries and connecting them in parallel will double the amount of time before the batteries are discharged. If your RV has the room, you may want to opt for 6-volt golf-cart batteries, connected in series to produce 12 volts. This setup can endure more deep discharges than a 12-volt RV/marine product (sometimes twice as many) and is popular with those who only operate their RVs through an inverter on battery power. Remember that parallel connection combines amps, not voltage, and series connection combines voltage, not amps.

There are several types of batteries on the market today. Flooded-cell batteries, or those using water as the electrolyte, remain the most widely used, primarily because they are inexpensive, work well in a variety of applications and have a good service life (when properly maintained).

Gel-cell batteries are also a flooded-cell battery, but one in which silicates have been added to the electrolyte material to make it a gel. These batteries fall into the sealed-lead acid (SLA) or maintenance-free category, but should not be confused with Absorbed Glass Mat (AGM) batteries, which are often incorrectly referred to as gel-cell batteries.

An AGM battery utilizes a fiberglass mat material, in which the electrolyte has been absorbed. These batteries are therefore dry internally, and are more resistant to vibration and shock than their flooded-cell counterparts. AGM batteries cost about twice as much as common flooded-cell batteries, but may be worth the added cost in an RV-solar environment.

AM Solar did extensive testing on AGM batteries and found their charge time shorter and charge acceptance greater than in flooded-cell batteries. The AGM batteries tend to hold up better under heavy loads, such as running a microwave through an inverter. They also don’t outgas — unless severely overcharged — don’t corrode the battery terminals nor do they require water.

System Sizing
There are a variety of ways to calculate your RV’s power requirements, but AM Solar’s recommendation is to boondock using no AC generator or shorepower for as long as it takes to run your house batteries down during normal usage.

Let’s say it takes three days to drain the batteries. Assuming you have two relatively new Group 27 deep-cycle batteries rated at 100 amp-hours of storage each, you theoretically have 200 amp-hours of energy to draw from. However, only about 75 percent of that is usable. You really only have about 150 amp-hours on tap. Now, divide the storage capacity (150 amp-hours) by the number of days you boondocked (three) and you get 50 amp-hours consumed on an average day.

Now that the battery storage capacity has been established, you’ll need to determine how many solar panels you’ll need to replace the 50 amp-hours consumed on an average day. Assuming you use your RV primarily during the spring and summer like most of us, you’ll be exposed to an average of five peak-sun-hours a day. A 100-watt panel produces an average of about six amps per peak-sun-hour, or about 30 amp-hours a day. So, in our example, you would need two 100-watt solar panels to fully recharge on an average day.

In AM Solar’s experience, the average RVer consumes between 75 and 150 amp-hours of energy a day; thus, three to six 100-watt panels would be required to break even on a daily basis.

Solutions
With roof vents, air conditioners, antennas and other components taking up space on the roofs of our RVs, you may wonder where to mount solar panels large enough to generate the power you need. AM Solar offers 50-, 100- and 150-watt panels, as well as custom panels to fit almost any area on the roof. It also offers rocker foot mounts that allow the panel to tilt toward the sun when used with its optional tilt bars. Made from stainless steel, these mounts conform to the roof and allow access to the junction box for expansion or troubleshooting.

The example here is a Class A motor­home at the AM Solar factory in Springfield, Oregon; however, the process and hardware are similar for most RVs. As you can see, it’s not complicated and adding solar power to your RV will allow you to truly get off the beaten path.