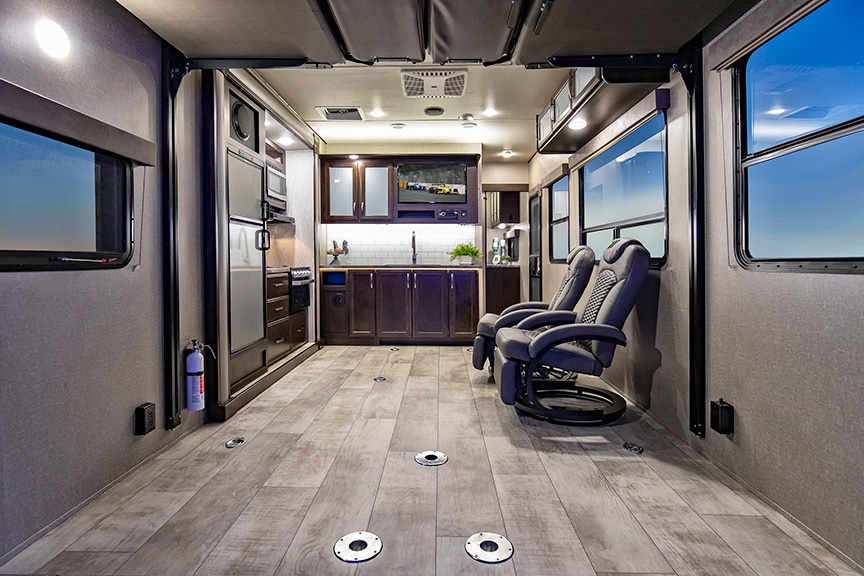 This bulletin just in: RV dealers are asking manufacturers for a toy-hauling travel trailer that’s friendlier to lighter tow vehicles and lighter wallets, without compromising function or style. Basically, more for less.

In response to this reasonable request, Grand Design debuted the Momentum G-Class family of toy-hauler travel trailers and fifth-wheels to dealers last fall. Among the three travel trailer floorplans is the 25G, a two-slide, nearly 31-foot “conversion” model (what we call toy haulers with a garage that converts to living space) that can be towed by a suitably equipped half-ton truck or large SUV.

The main living area is nicely equipped with two freestanding recliners and an L-shaped kitchen.

Just about everything here is standard, which is nice for those who like having a bundle of features built into the asking price. We mean that literally — they’re built in. Many of the Momentum 25G’s notables are found in its construction and systems, like the one-piece, 1-inch marine-grade bottom-insulated flooring, 2,500-pound-capacity tie-downs that are anchored to the chassis, a hefty 100-gallon freshwater tank and a vented attic.

Along those lines, Grand Design didn’t mess around when prepping the 25G for all-weather use. You’ll find radiant foil insulation in the roof and floor, and rigid foam insulation in the fully laminated walls. The 30,000-Btu furnace distributes heat through vertically mounted heat registers in cabinet bases — no floor registers to accumulate debris. Tanks and dump valves are enclosed and heated, and exterior storage doors are insulated.

The outside kitchen comes with a folding two-burner cooktop and a small fridge.

You’re not likely to hear much from the stealthy A/C system’s 15,000-Btu air conditioner (nor its optional twin) because of the company’s “racetrack ducting” design. An optional generator sits within a fully insulated under-bed box.

What you will see are things like undercarriage and front-cap lights, an 18-foot lighted power awning and an exterior kitchen with a small fridge, a folding two-burner cooktop and shelved storage space — a rare find in travel-trailer toy haulers.

Top to bottom: The HappiJac sofas store against the walls for travel, come down for sleeping and fold up for sitting with the three-post table.

Inside, the 25G sleeps up to six: two in the queen bed up front and four in the 13½-foot garage where you can fold down the two facing sofas and drop the power queen bunk, both topped with memory foam. If the toys are low enough and you want to store them inside at night, you can lower the bunk and use that on its own.

During the day, those six can all sit on the sofas between a three-post removable table that’s sizable enough to accommodate dining or gaming for them all, which gets two thumbs up. Too many times we see ample seating but tiny tables that hold barely anything. Power outlets are placed at the front edge of both sofas, and drop-down middle consoles in the sofa house cupholders if just a few are gathered and don’t wish to put up the table.

Providing additional seating, two recliner chairs are freestanding so you can scoot them to any spot and stretch out on the matching footrests. All the seats are quite comfortable, and the ability to move the recliners is appreciated.

There’s also a smidge of versatility in how the garage space is utilized. Folding the sofas up against the power bunk’s underside opens the garage to the full interior width of the RV for transporting wider toys, while folding them against the side walls gives about a foot more vertical space for taller toys.

At the rear of the garage is a TPO diamond-plate flooring area that angles down for a smoother ramp transition and a pull-down screen. With the patio-system option, a lighted power rear awning stretches over the suspended ramp with a short rail for some extra living space; a three-season wall to enclose it is another option.

The main living area is spacious and nicely outfitted. The L-shaped kitchen, partially housed in one of the slideouts, includes a roomy refrigerator-freezer, a three-burner cooktop with a flush glass cover, an oven, a microwave with an outside vent, a large, covered stainless-steel farmhouse sink and a trash can underneath, and good amounts of counter and storage space.

Next to the farmhouse sink, a slideout houses the refrigerator-freezer, range and microwave.

Part of the rear-facing kitchen wall houses a TV that’s on a swing arm and the much-touted Rockford Fosgate zone stereo system, along with an open cubby area good for stashing keys and sunglasses.

A strong feature is the number and placement of windows in the 25G. There’s a small one in the kitchen slideout, uncommon on its own, and opposite is an unusually large one behind the recliner chairs. Two small windows over the sofa contribute to the whole for a lot of natural light, even with the garage door closed.

Bed, Bath and Beyond

Toward the front is the dual-access bathroom with sliding doors, foot-flush toilet and two-panel mirrored medicine cabinet, not to mention the shower with an arched curtain bar and an impressive 6½ feet of head clearance.

A slideout extends the head of the queen bed, making the front bedroom roomier.

The 25G’s Grand Design-ers say they focused on making the bedrooms spacious and pleasant, so you won’t find any corner or tight-walkaround beds. The slideout is just the width of the bed, so in absence of bedside tables a shelf is nestled into each corner of the slideout above the headboard. There’s another window here over the bed, rather than in the sides of the slideout, which makes for yet more natural light, plus a cross-breeze when the opposite-wall window is open.

There isn’t much depth around the edges of the room for storage, so the lower half of the front wall consists of shallow drawers and cabinets, while the top half is dominated by a massive backlit mirror. That actually makes good sense. Providing a mirror plus a softer light option — both needful but often missing in today’s RVs — is an excellent way to make hard-to-utilize real estate both practical and stylish.

Other overhead and lower cabinets are likewise mostly small or shallow, but there are several among which to divvy up your belongings. Counter space is respectable, and the front wall has plenty of outlets, though the rear-bumper side of the bed has direct access to only one USB outlet.

Overall, even with an eye toward economy and simplicity, the Momentum 25G doesn’t feel basic; we noted and appreciated the well-thought-out choices. Grand Design seems to have struck a good chord with a quality build plus livability and a pleasant aesthetic. This brand-new G-Class of travel trailer toy haulers is likely to live up to its name and build in momentum among RVers. 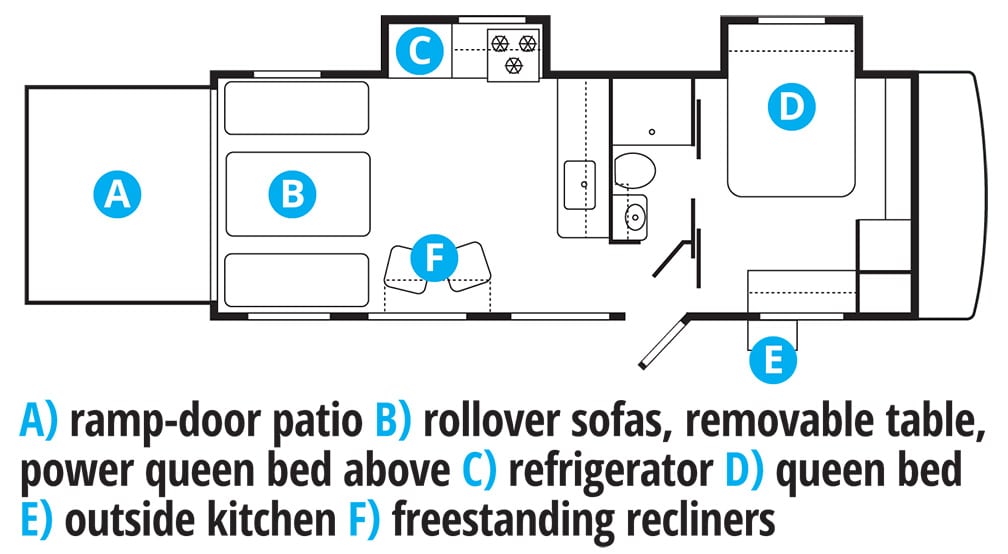