In an RV Resolutions letter headlined “Reality TV” in the April 2019 Trailer Life, Herb Sims asked for help after struggling with “snowy” cable-TV reception in the living room of his fifth-wheel.

I have been dealing with a TV problem in my 2018 Keystone Cougar 368MBI ever since we bought it. The problem concerns poor picture quality on the living room 4K TV when connected to campsite cable service. The picture on the TV in the master bedroom is crystal clear. However, the picture from the same cable channel in the main living room is extremely snowy, to the point of being unwatchable. Over-the-air channels work just fine.

After visiting several Facebook forums for Cougar owners, it became obvious that my problem was not unique, as others posted similar complaints. Being a NASA electrical engineer and working in the RF (radio frequency) and microwave field for almost 30 years, I felt qualified to troubleshoot the cause of the problem.

In our fifth-wheel, we have four cable drops. The first choice was to remove and replace all external cable drops, from wall plates to TVs, which did not solve the problem. I then removed and replaced the satellite/cable jumper cable behind the master-bedroom TV, and still no change. At this point it was obvious that the problem was within the walls, so I removed the cover plates to all four drops and began tracing the wiring, since I had no schematic of the wiring setup.

The first thing I noticed was that one cable had a significant gash in the outer cover (photo 1), which is a quality-control issue and should have been fixed at the factory. After that cable section was cut out, a new RF connector was installed, but this did not solve the low-signal quality to the living room TV.

TV Port 2 from the boost/amp goes directly to the master bedroom TV. However, TV Port 1 goes to a three-way power splitter (photo 3).

After much signal tracing using sophisticated microwave-test equipment, I was able to trace two of the three cables coming from the three-way power splitter — the two black cables. However, I was unable to determine where the orange cable ends.

One of the two black cables goes directly to the cable connection in my storage compartment, while the second black cable goes to the second bedroom plate. Removing that plate, I found there was another two-way power splitter to send signals to that TV in the second bedroom as well as to the TV in the living room. Looking at the living room TV plate, there was yet another two-way power splitter that sent the signal to the 4K TV as well as the surround-sound system for the AM/FM radio.

I must say that once I had the wiring diagram documented, it became exceedingly clear as to why my (and everyone else’s) living room TV was having so much trouble with cable service at the campgrounds. The only way I was able to get the living room TV to function was to bypass the other drops (external and second bedroom), but when we add TVs to those areas, we are back to where we started — with no functioning TV in the living room.

I have reached out to a number of people at Keystone but have received zero support in getting this problem solved. I am contacting you in the hope that you can put the weight and backing of your magazine behind a request to get Keystone to fix this problem.
William “Herb” Sims, New Market, Alabama

RV Resolutions forwarded Herb Sims’ concerns to the manufacturer and heard back from the customer-support department:

Keystone has been in contact with Mr. Sims. It is our understanding that he has agreed to work with a Keystone-authorized dealership and Keystone RV Company to resolve this concern. Thank you for bringing this matter to our attention.
Alisha Howton, Customer Support Manager, Keystone RV Company, Goshen, Indiana

After taking his fifth-wheel to an RV dealership authorized to handle Keystone warranty work, Sims sent the following update:

I would like to thank everyone involved with getting this resolved in a very timely and satisfactory manner. Keystone (specifically, Alisha Howton) and Camping World of Chattanooga worked efficiently to resolve the issue. I have been extremely pleased with the results.
Herb Sims

Following publication of the above letters in the April 2019 Trailer Life, we heard from Herb Sims again:

In my original reply to RV Resolutions, I stated that everything appeared to be functioning. However, after further inspection, the repair simply moved the low-power ports to different TVs. I was focused on the living room TV since that is where the problem was most obvious. 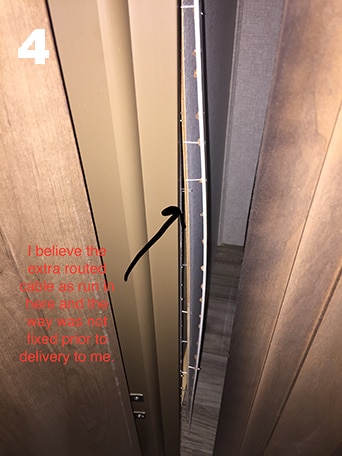 Here is what I believe the repair facility did to “correct” the problem:

They ran a second line from the distribution amp in the master bedroom to the second bedroom (photo 4). That was absolutely necessary.

What was also absolutely necessary was to add a second cable running from the distribution amp to the living room TV, but they did not do this. The reason for this additional cable run is the living room TV and the AM/FM receiver share the same feed (through a 3dB splitter), which has not been replaced, and thus that signal is marginal at best.

They sent a powerful signal directly to the living room TV, which appeared to fix the problem, but they moved the low-power port to the spare bedroom. They also completely removed the fifth drop, which is on the outside of the camper, so now we cannot watch TV outside.

Here is what still needs to be done:
• Replace the Winegard cable/antenna booster amp with an eight-way active power splitter so that each port on the eight-way splitter is above +4.5dB signal level.
• Run a second cable from the new distribution amplifier to the living room TV/AM/FM receiver and remove that 3dB splitter between the TV and AM/FM receiver.
• Connect the eight-way splitter to the five original TV ports and the FM/AM receiver. That would use six of the eight ports on the distribution amp.
• Terminate the two unused ports with 75-ohm termination loads.
Herb Sims

Herb Sims’ fifth-wheel is currently at a Keystone-authorized dealership awaiting repairs. We will post updates when new information is provided.

In the meantime, the owner of a 2018 Keystone Montana High Country fifth-wheel wrote in to share a solution that may help some readers:

Being a do-it-yourself person, I replaced the 12-volt DC booster on my 2018 Keystone Montana High Country fifth-wheel with a four-port booster (photo 5). This booster runs on low voltage from the small transformer that you plug into the 120-volt AC outlet, and has one inlet and four outlets to run to all the TVs. I also installed a coax switch (photo 6) to switch between the incoming cable and antenna connections.

Keystone did run good RG6 coax cable throughout the Montana, but I never could figure out why they used a 12-volt DC booster when all of my televisions are 120-volt AC. This also fixed the problem when I turned on the bathroom exhaust fan and it started snowing on the TVs.
Kevin Fischer, Quincy, Illinois

We continue to hear from Trailer Life readers regarding this issue:

I had a similar problem with my Grand Design Reflection, so I was very interested in Herb Sims’ letter, especially since he did such a great job describing the troubleshooting procedures he went through. The problem with my RV was that a screw had been driven through the cable when the trailer was built. Even though the warranty was up, Grand Design stepped forward and fixed it.
Jim Biestek, Tucson, Arizona

I am taking my 2017 Coachmen Chaparral 370FL to the dealer for this same problem and would like to know what was done to correct it. This is the third time I am taking the fifth-wheel in for this issue, and I am told they are going to rewire all the cables.
Jim Wheeler, Caledonia, New York

I can finally say, with 100 percent certainty, that the unit has been repaired. Long story short, once they did what I outlined in the original posting (amplified distribution amplifier and additional coax cables installed), the RV now has good signals to all the drops.
Herb Sims

RV Resolutions is Trailer Life’s forum for the settlement of conflicts between consumers and RV dealers and manufacturers, accessory suppliers and service providers. After exhausting all other resources without success, mail a typed letter to Trailer Life RV Resolutions, 2750 Park View Court, Suite 240, Oxnard, California 93036. Include copies of appropriate bills and correspondence along with a self-addressed, stamped envelope. Selected letters will be edited and published unless otherwise requested.