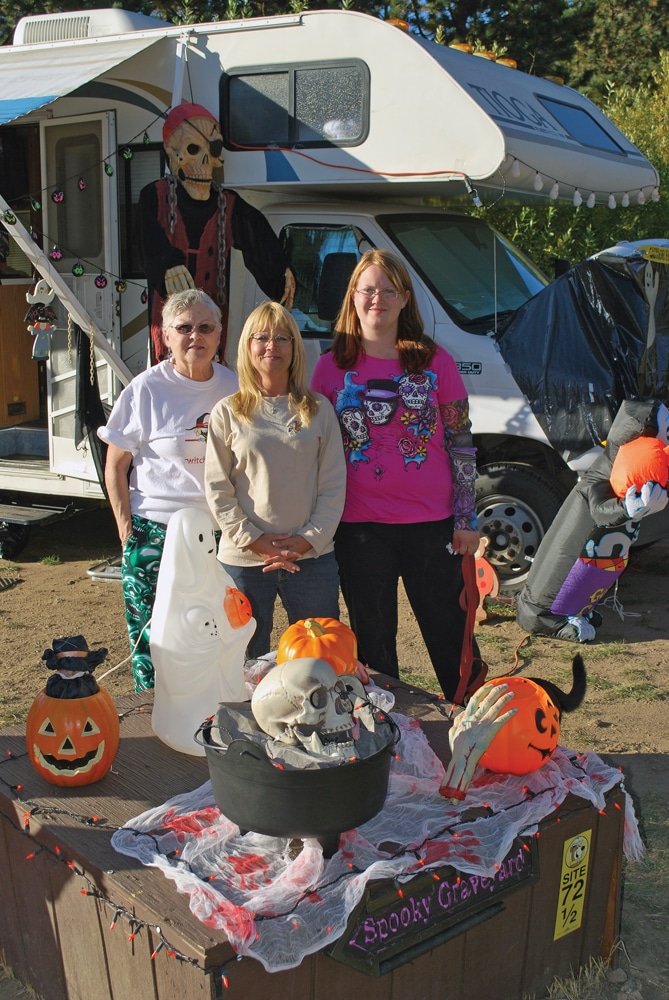 When LaVeta Shinkle started talking about the motorhome trips she would take this year with her daughter and granddaughter, one of the first that came to mind was their annual visit to Jellystone Park Camp-Resort in Estes Park, Colo.

Shinkle, her daughter, April Milne, and her granddaughter, Lacey Milne, have taken part in Jellystone’s Halloween-themed activities every fall for the past 18 years.

“We haven’t missed one yet,” Shinkle said, adding that her family loves Jellystone’s costume and campsite decorating contests, as well as the park’s monster ball and the trick-or-treating that takes place throughout the park.

But while there weren’t many campgrounds that offered Halloween-themed activities when Shinkle and her family first started their Jellystone tradition nearly two decades ago, the concept has since spread across the country, even to places where one would least expect to find anyone celebrating Halloween.

“It’s the most popular thing we do,” said Dave Lovell, director of marketing for Lake Rudolph Campground & RV Resort in Santa Claus, Ind., which is planning seven consecutive Halloween-themed activities this fall.

The Halloween-themed events are so popular that Lake Rudolph now takes reservations more than a year in advance.

“It’s pretty amazing,” Lovell said, adding that Halloween-themed events have transformed the traditionally quiet fall shoulder season into the busiest time of year at the park. It’s a phenomenon that’s happening at many campgrounds across the country, particularly at those that have developed interesting and entertaining activities for their guests.

Far Horizons 49er Village in Plymouth, Calif., complements its costume and campsite decorating contests with a “best scream” contest, which attracts participants of every age. Judges are selected from among the campers and prizes are awarded for the best screams. The 329-site park scheduled two Halloween-themed weekends this fall, and both were already sold out by late May.

Those with a competitive spirit may also be drawn to Land-O-Pines Family Campground in Covington, La., which broadens its campsite decorating contests by encouraging guests to create their own haunted houses using tents, sheets of plastic and even their RVs. The park was planning three consecutive Halloween-themed weekends this year with a variety of other activities, including hayrides, apple bobbing, jack-o’-lantern contests and dancing to live music.

Some parks are also organizing Halloween-themed activities in which pets can participate.

Four Paws Kingdom in Rutherfordton, N.C., not only offers campsite decorating and a pet costume contest, but “bark-or-treat” activities for RVers to enjoy with their pets.

Growing numbers of park operators are also creating their own haunted attractions.

Scenic Ridge Campground in Whitewater, Wis., has a 15-minute haunted trail that includes a cemetery and a black maze, while the Winston-Salem KOA in Statesville, N.C., has developed a haunted walk next door to the campground, which it calls “Midway Wicked Woods.” The haunted walk is open to campers as well as the general public.

Meanwhile, the KOA in Hagerstown, Md., routinely draws as many as 300 people a night to its haunted house, which is set up inside a two-story house next to the campground that park owners John and Judi Durham purchased 15 years ago.

“We weren’t sure what to do with the house until our son, JC, who was then in high school, suggested we turn it into a haunt for the campground,” John Durham recalled. “We started slow, jumping out of closets, from under beds and other silliness, but it scared people and it was great fun for us to do it.”

But as interest grew, the Durhams stepped up their game, gathering ideas from seminars as well as other haunted houses and Halloween-themed tradeshows around the country. They have since equipped their haunted house with air-driven animatronics and other professional props, all of which help tell the story of Mable, a woman who repeatedly lures men into marriage, fattens them up and then murders them.

“It’s her many husbands and family that she has murdered over the years who haunt the house,” Durham explained, adding that the house is so scary that no one under age 12 is allowed to go into it.

“We put a high emphasis on realism,” Durham said. “Each room is decorated with wallpaper, curtains, furniture, family photos and antiques that you would find in an old home. Our actors wear only prosthetics and makeup, no masks. Our costumes are real clothing bought at Goodwill or purchased from a professionally made costume shop.”

But while super scary haunts are always popular, most campgrounds have found that it behooves them to offer varying levels of scariness on different weekends to accommodate families with young children.

That approach has worked well for the Jellystone Park in Swansea, S.C., which has five consecutive Halloween-themed weekends. The first two weekends are “no scare” weekends that are designed for parents with young children. They include pumpkin painting and various games as well as hayrides.

The last three weekends are the scary ones and include a haunted house, which is set up inside an old barn. Park co-owner Dana Gabriel said the theme of the haunted house changes every year, with this year’s focus featuring twisted versions of fairy tales. She smiled when asked to explain the scariness of the haunt.

“It depends on the individual,” she said, noting that young children can sometimes get through it with no problem at all. It’s the bigger kids and adults that are more likely to get scared.

Last year, she said, a football player from a local high school couldn’t get past the third room. He had to be escorted out of the barn, where he was greeted by the snickers of several friends who were waiting for him outside.