The Alaska Highway in California? That’s what an old flyer at California’s

Weed Historic Lumber Town Museum claimed. “It marks the beginning of the Alaska Highway,” read the leaflet, with “it” being the otherwise humble town of Weed.

Weed sits on Interstate 5 at the start of U.S. Route 97, a north-south thoroughfare that crosses Northern California, Oregon and Washington on its 663-mile journey to Canada. From there, British Columbia Highway 97 takes over and continues north for another 1,293 miles, the last 600 miles of which are indeed part of the Alaska Highway. B.C. 97 terminates at the Yukon border in Watson Lake, and the Alaska Highway carries on with a series of other route numbers. 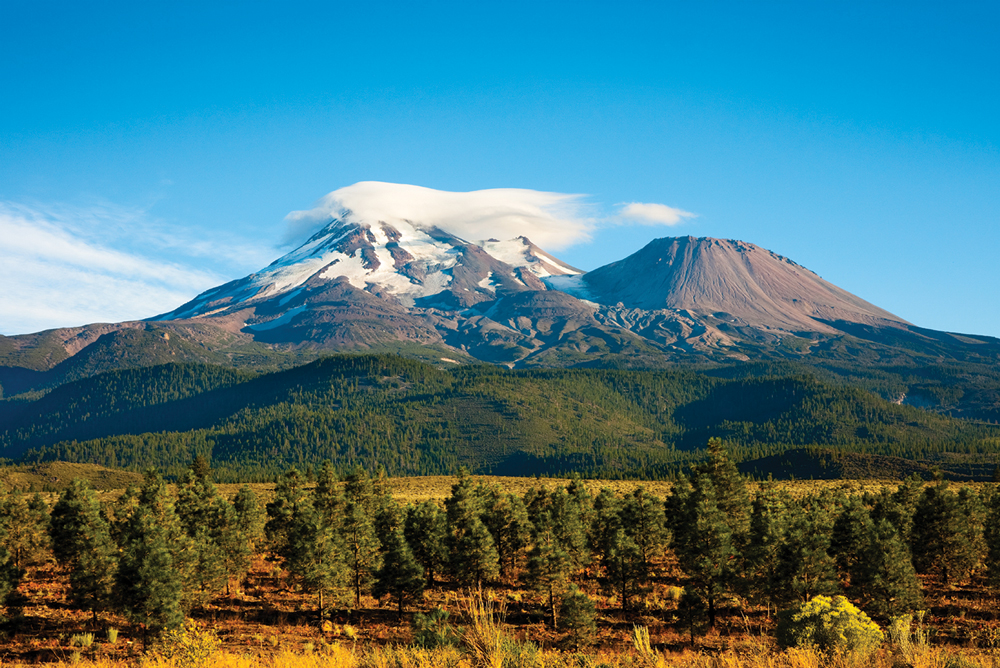 Mount Shasta dominates the scenery at the beginning of Route 97.

We pulled our travel trailer 750 miles exploring Route 97 from its origin in Weed to Kelowna, British Columbia. Another 100 miles in our tow vehicle took us to Kamloops, but that’s as far north as we got. Along the way we found a region of austere high-desert beauty not too far removed from its pioneer roots and met people who relish an intimate connection with nature.

From Weed, Route 97 follows the Volcanic Legacy Scenic Byway to Klamath Falls, Oregon. A spur of the byway branches east on California Route 161, leading 40 miles to Lava Beds National Monument. We couldn’t resist the chance to explore lava tubes and view ancient rock art, so we did, while camped in nearby Tionesta.

We also investigated World War II Valor in the Pacific National Monument’s Tule Lake Unit. It includes a former relocation center where Japanese Americans were incarcerated during WWII. Much of what’s left is behind wire-topped fences and locked gates. We missed the weekly guided tour, but the ranger at the visitor center shared stories, and we stopped to see the small exhibit at the Tulelake–Butte Valley Fairgrounds and Museum. We recommend doing this; it provides a sobering but important history lesson.

In Klamath Falls, the Volcanic Legacy Scenic Byway departs from Route 97 and branches north-northwest on Oregon Route 140 toward Crater Lake. Although we skipped Crater Lake on this trip, if you haven’t been there, by all means, go. Instead, we headed for the central Oregon metropolis of Bend, 140 miles north, stopping along the way at Chiloquin’s Collier Memorial State Park and Logging Museum to tour the historic equipment, structures and fascinating photos.

Bend is a city we never tire of visiting. Browsing one-of-a-kind shops and strolling the banks of the Deschutes River rewards our time spent in this lively downtown. We are repeat customers at the Deschutes Brewery for burgers and craft beer, and Zydeco Kitchen for fresh Cajun-inspired Northwest cuisine. Our new favorite indulgence is downtown’s Bontà Natural Artisan Gelato.

To compensate for indulging, we did some hiking at Smith Rock State Park, 27 miles northeast of Bend. Here we ogled rock climbers who, from a distance, resembled insects scaling the sheer cliff face.

Get Your Kicks on Route 97
Beyond tracing a long stretch of the Volcanic Legacy Scenic Byway in California and Oregon, Route 97 links to four other National Scenic Byways: Oregon’s Outback and Cascade Lakes and Washington’s Coulee Corridor and Stevens Pass Greenway.
www.fhwa.dot.gov/byways

For a picturesque day trip, the Cascade Lakes Scenic Byway heads west from Bend toward Mount Bachelor before turning south near the crest of the Cascades.

The nearby town of Sisters bustled with people enjoying a popular bluegrass music festival and street fair when we visited.

Although last summer’s wildfire smoke marred our views upon arrival, a shift in the weather allowed us to do some stargazing. One evening we drove 30-odd miles southeast from Bend to the University of Oregon’s Pine Mountain Observatory. In summer it opens for public viewing on Friday and Saturday evenings. We were thrilled to see Saturn and its rings through the 32-inch reflecting telescope.

Just over the Columbia River in Goldendale, 150 miles north of Bend on Route 97, Washington State Parks operates the Goldendale Observatory on a year-round schedule that’s more flexible than Pine Mountain’s.

Our trailer’s next stop was 100 miles further north in Ellensburg, home to Central Washington University and a handsome late-19th-century brick downtown. We browsed art galleries and the local history museum with a surprising collection of early motor vehicles, including one of the first station wagons. 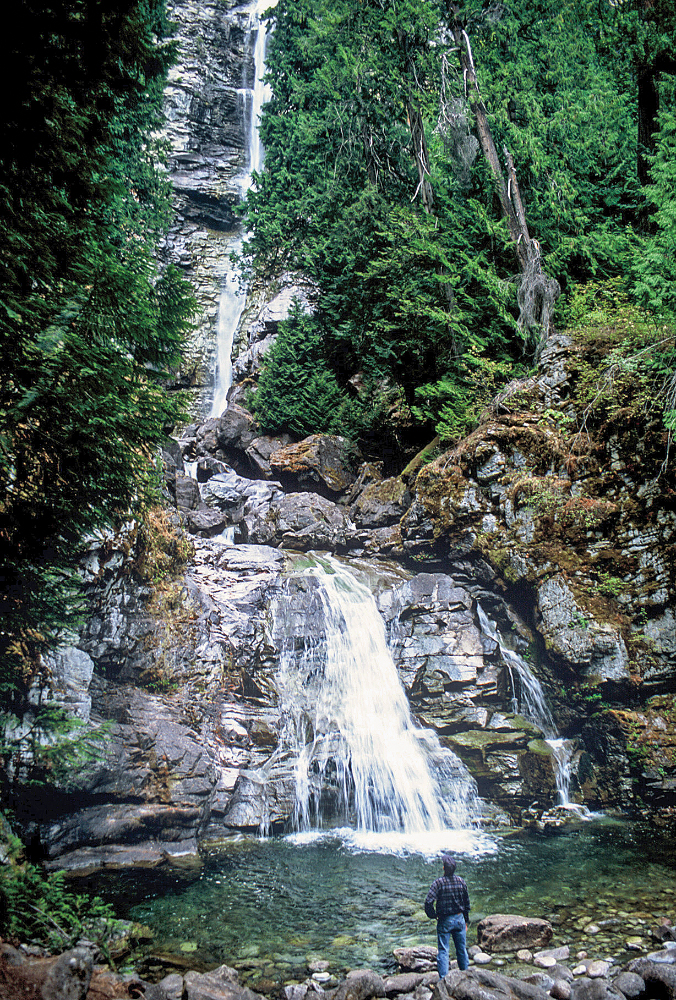 From remote Stehekin, Washington, visitors can take a 3½-mile hike to Rainbow Falls or hop the shuttle from the boat landing for a narrated ride to the 312-foot cascade.

We looked forward to visiting the Yakima Valley for its local wines but learned the valley also produces 70 percent of all U.S.-grown hops. A few miles east of Yakima, near Moxee, Bale Breaker Brewing Company has a popular taproom where our favorites were the Topcutter IPA and Raging Ditch Dry-Hopped Blonde.
At the American Hop Museum on Route 97 in Toppenish, we learned about hop production and viewed old-time equipment used in cultivation and processing. Across the street we found the Northern Pacific Railway Museum. Located in a beautifully restored depot, this museum is worth a visit. An extensive collection of Northern Pacific Railroad memorabilia includes reconstructed Pullman berths. Cabooses and other railcars occupy the adjacent rail yard.

Back in Yakima, the large, modern Yakima Valley Museum houses a well-presented historical collection; we especially liked the neon signs. We couldn’t leave the region without stopping at several wineries including Bonair Winery near Zillah and Naches Heights Vineyard off U.S. Route 12, north of Yakima. Both are small, casual, friendly places that craft good wine and where you’re likely to meet the owner/winemaker in the tasting room.

From Ellensburg north to Chelan, Route 97 runs closer to the Cascades’ eastern flank, climbing over 4,124-foot Blewett Pass before descending into the Wenatchee Valley. The Wenatchee-Cashmere-Leavenworth area is definitely worth visiting, if you have time. But we continued heading north to stay at one of our favorite campgrounds, the City of Chelan’s Lakeshore RV Park, and visit remote Stehekin.

The Lady of the Lake II departs from Stehekin on 55-mile-long Lake Chelan.

The isolated settlement of Stehekin, home to fewer than 100 year-round residents, is scattered around the upper end of 55-mile-long Lake Chelan. Inaccessible by road, Stehekin welcomes all comers by ferry, private boat, barge, seaplane or on foot. Scenic beauty, outdoor recreation and isolation draw visitors. So, too, does the Stehekin Pastry Company.

After a 20-minute flight in a de Havilland Beaver, operated by Chelan Seaplanes, we arrived at Stehekin Landing and promptly hiked to the pastry shop. Refueled, we continued to Rainbow Falls and the historic Buckner Orchard where we boarded the shuttle bus to the end of the line at High Bridge.

During a brief layover, the view from the bridge captivated us, as did five passengers we met upon reboarding. All were nearly done hiking the Pacific Crest Trail, completing 2,575 miles from the Mexican border in roughly five months. They were here to pick up mail and supplies before finishing the final 90 miles.

We returned to Chelan aboard the Lady of the Lake II.

From Chelan, Route 97 follows the Columbia River for 30 miles before heading into the region spelled Okanogan south of the U.S.-Canadian border and Okanagan north of it. Our border crossing was quick and uneventful with passport ID cards. We then traveled 15 miles to Oliver, a small town that promotes itself as Canada’s Wine Capital.

Duty-bound to investigate the source of the town’s fame, we visited Tinhorn Creek Vineyards, Black Hills Estate Winery and Stoneboat Vineyards, all within a few miles. The first two wineries are large and modern with spacious tasting rooms, terraces and vineyard views. Tinhorn Creek includes a full-service restaurant, while Black Hills Estate features a short but tempting menu and tasting under the tutelage of a “wine evangelist.” Family-owned and operated Stoneboat has a cozy tasting room. All three offered excellent wine at fair prices.

Oliver averages 13 inches of precipitation a year, making the southern Okanagan Valley area Canada’s only desert — a fact that delights locals and visitors alike. We traveled in this semiarid climate most of our Route 97 journey, and in southern British Columbia we reached its northern limits. Coupled with abundant water from lakes and mountain runoff, this climate fosters agricultural abundance, especially orchards and vineyards.

In the 1870s when English immigrant Barrington Price arrived in the adjacent Similkameen Valley as an agent for the Hudson’s Bay Company, he must have perceived the region’s agricultural potential. By 1877 he had built and began operating a gristmill near what is now the town of Keremeos. Crafted by hand from local materials, this 138-year-old mill has been restored to operating condition and is designated a British Columbia Heritage Site. We marveled at the water-driven pulley-and-belt system that turns millstones. Charming gardens include a heritage orchard. 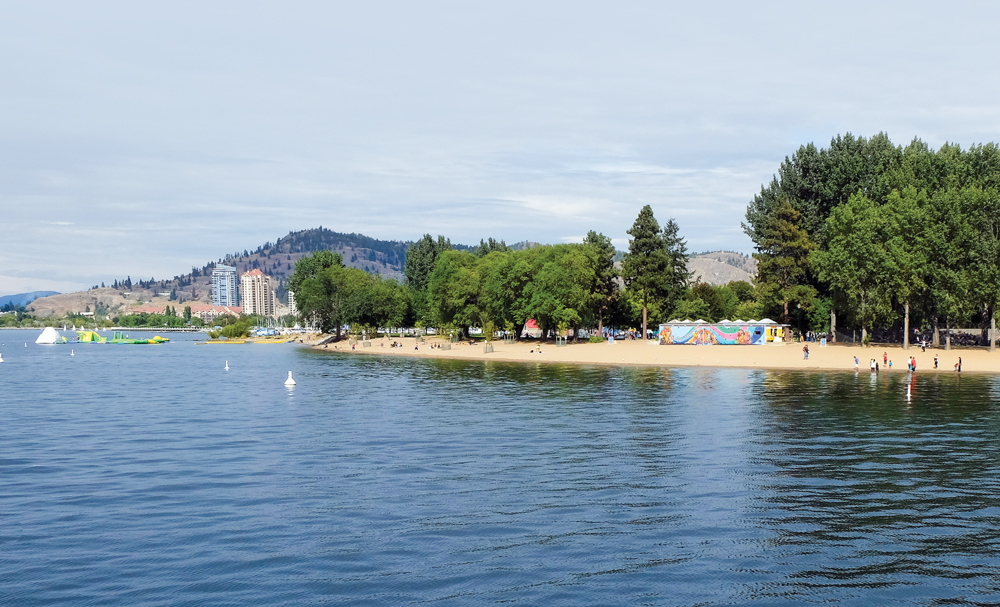 Okanagan Lake shapes the western boundary of Kelowna, by far the biggest city along the route.

Kelowna proved to be a modern, bustling city of 180,000 people, making it the largest community not only in the Okanagan Valley but anywhere along the 1,956-mile route. Bend, the next largest city, has just over 80,000 residents, although its metropolitan population approaches 165,000.

In Kelowna we visited the farmers market, savored lunch on a lake cruise, toured the Okanagan Mission, strolled the waterfront and stood in line for some yummy ice cream on a warm afternoon. We toured the surrounding area, including heading 100 miles up B.C. 97 to Kamloops, requiring yet another ice-cream stop and investigating the Kettle Valley Steam Railway.

Completed 100 years ago, the 325-mile-long railroad served inland southern British Columbia across mountainous terrain. This railway engineering feat was dubbed McCulloch’s Wonder after its chief engineer. Southeast of Kelowna, we drove up a washboard gravel road to Myra Canyon where a 7.5-mile stretch of the railroad snaked around the canyon on 18 trestles and through two tunnels. It’s now part of a long-distance hiking and biking trail.

In Summerland the last operating section of the Kettle Valley Railroad offers excursions over the remaining 10 miles of track. The beautifully restored 1913 steam locomotive pulls four cars on a scenic 90-minute trip with views of farms, vineyards, mountains and Okanagan Lake.

We navigated a very narrow, winding road and hiked a short, steep trail to the top of Giants Head Park in Summerland. Then we enjoyed a relaxing lunch on the patio of Dirty Laundry, a nearby winery we had spotted from the train. It seemed a fitting conclusion to a fulfilling journey.

We’ll save the road north, to Alaska, for another trip. 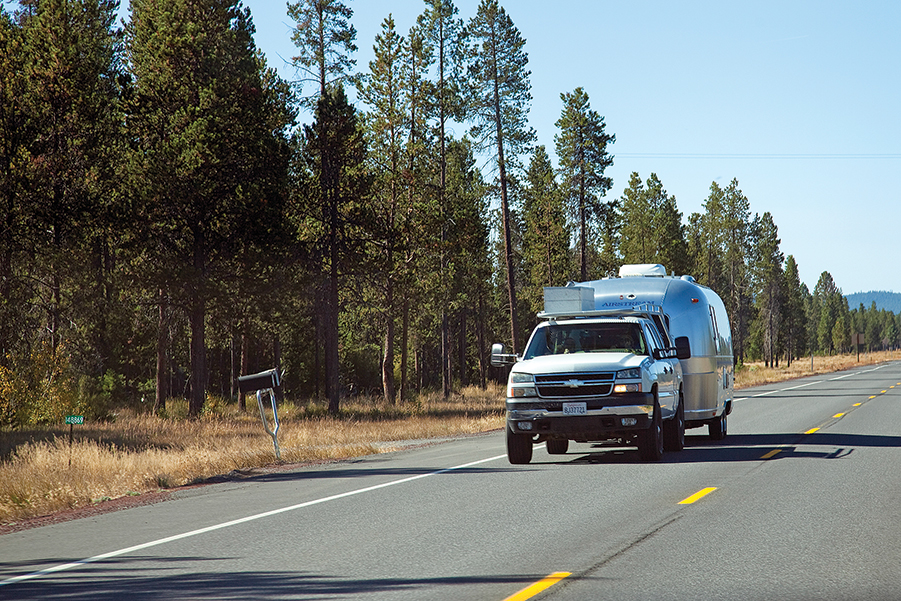 RVers traveling on the east side of the Cascade Range discover unmatched scenery and outdoor recreation, along with a wide range of RV parks and campgrounds. Here are some of the places we camped on our Route 97  trip. 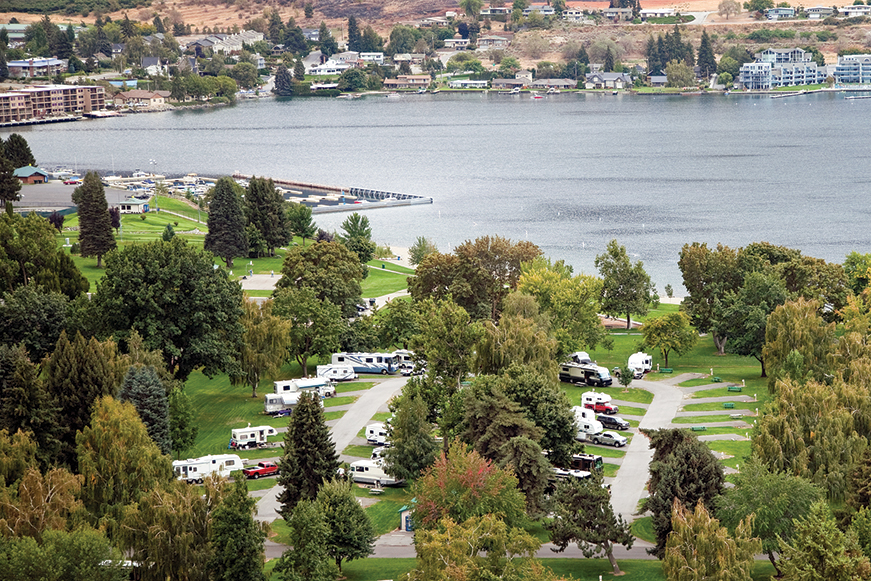 True to its name, Lakeshore RV Park sidles up to Lake Chelan with 165 full-hookup campsites.