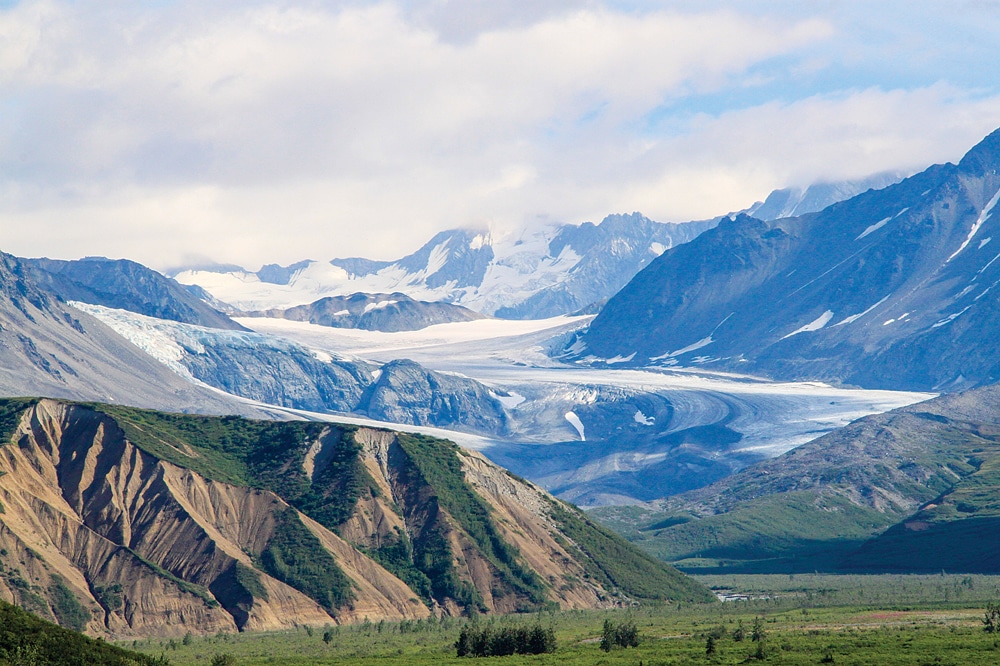 The year was 1913 when an intrepid entrepreneur named Robert “Bobby” Sheldon drove the first automobile approximately 360 miles from Fairbanks to Valdez, Alaska. Back then, Richardson Highway was little more than a muddy wagon track that crossed rushing creeks and rivers. No one had ever tried driving a car down it. Fast forward more than 100 years and I’ve joined some new Alaskan pioneers in an RV caravan as they re-create Sheldon’s journey, stopping along the way at historic roadhouses. It’s a “Great Alaska Roadhouse Adventure.”

We set out from Fairbanks, early, under sunny skies. Our caravan includes an antique 1916 Dodge Model 30-35 Touring car, one of Sheldon’s cars and the last original car to drive this highway (then called the Valdez-Fairbanks Trail). We’re also taking two Class C motorhomes and a pickup towing an auto trailer. Our adventurous group consists of Willy Vinton, manager of the Fountainhead Antique Auto Museum in Fairbanks; Steve Carey, a master mechanic; Don and Ray Cameron, and David Stone, co-owners of the timeworn Dodge; their wives, and me.
Willy and I are the first to climb into the Dodge and motor at 30 mph down the highway with the RVs and pickup following behind. We don’t get far. Within 20 minutes, we’re pulled over on the side of the freeway with carburetor problems and a flat tire. Apparently, 80-year-old tire tubes rot! It’s the first of more than a half-dozen stops we make to adjust, repair or jury-rig fixes to this automobile that hasn’t seen a road in decades.
The guys load the vintage Dodge into the auto trailer and Don and Ray, driving the RVs, head in different directions in search of new tubes and tire repair. Within a couple of hours, we’re back on the road, this time with Willy and Steve in the Dodge and me in one of the motorhomes.

The Richardson Highway was formerly the main route between Anchorage and Denali National Park. However, since AK 3 (“The Parks” Highway) was built, traffic has substantially decreased on Alaska’s first highway. For RVers, that means a roadway that’s both scenic and uncrowded. It’s also filled with history and legend. The more than 360-mile stretch of road passes by several historic roadhouses that still offer travelers what they always have – food, sometimes a bed, and a break from the highway. At one time, there were more than 30 roadhouses along the Richardson, one every 10-15 miles, to serve travelers. Some roadhouses were little more than tents; others were elaborate, multistory log or clapboard structures. But all were essential to the safety and comfort of people traveling a dangerous roadway where temperatures plunge well below zero in winter. Today, about a dozen of the roadhouses still exist and we’re stopping at a number of them to share the story of our historic journey. 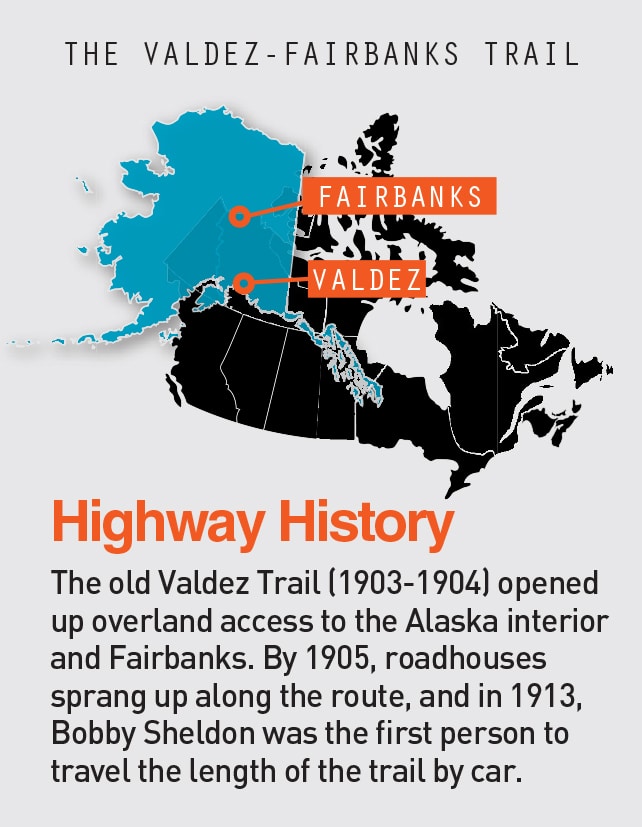 We pass over the Tanana River, a silty waterway braided with sand and gravel bars. Ahead is the Alaska Range, its jagged, snow-topped peaks looming on the horizon. We pass through boreal forests of poplar, birch and white spruce, over the Salcha River Bridge and turn at Salchaket Roadhouse, a modest log restaurant and gas station. Inside, I buy a small, tasty apple hand pie and owner Jean Thompson tells me, much like it was in the early days, Salchaket is still a community center. “We’re a one-stop place for folks who live out here – the post office, the liquor store and the roadhouse,” she says. “Even if it’s 40 below zero, if it’s Friday night, people show up here for our prime rib.”
Outside, a small crowd has gathered around the old Dodge, and David, who is a retired university professor, attaches a poster route map and the guys field queries. When people learn about Sheldon’s historic drive and the journey we’re taking, they’re excited and pepper us with questions and have their picture taken with the car.
We’re back on the road with Willy and David driving the Dodge, Ron in the first RV out front, Steve behind the Dodge in the pickup and Don bringing up the rear. The RVs keep their hazard lights on since the little Dodge tops out around 35 mph. We pull to the side of the road to fiddle with the carburetor; again to fix a broken wire; and still again to adjust the brakes. Our mechanical frustrations are minor compared to the challenges faced by early Richardson Highway travelers.

The old Dodge averaged about 35 mph on the highway.

We’re following the Tanana River to the west and pass a series of pretty lakes to the east. The trees here, mostly black spruce, are stunted from harsh weather, little rain and permafrost that keeps tree roots shallow. As we pull in at milepost 275 at Rika’s Landing Roadhouse in Big Delta State Historical Park, clouds begin to obscure the blue sky.
Rika’s was an important roadhouse along the Richardson and the large, two-story log house is now a museum with period antiques and artifacts used during its heyday. With barns, a telegraph office and kiosks telling the story, it’s a great place to get a sense of what roadhouse life was like at the turn of the century.
Our next stop is the Delta Junction visitors center. This is the terminus of the Alaska Highway and it’s also the site of the Sullivan Roadhouse, now a museum. The Sullivan might be called the “traveling roadhouse” since this original log structure has been moved several times. The first Sullivan moved when the Valdez-Fairbanks Trail was rerouted. It ended up on land owned by the military and was, in fact, on the edge of an active bombing range when preservationists moved the building in the 1970s to its present location.
We hear it’s raining hard farther along the highway, so the men load the Dodge into the trailer and caravan to the Lodge at Black Rapids, our stop for the night. Along the way, we pass Fort Greely, the northernmost U.S. missile defense installation and Donnelly Dome, a large volcanic intrusion that’s a prominent landmark for travelers. We’re climbing now, moving into the mountains, and the Alaska Range appears ghostly in the distance with clouds hanging around its snowy tops.

We begin descending into the broad Delta Valley that was cut by the glacially fed Delta River. It’s not long before we pull into The Lodge at Black Rapids at milepost 227.4, a modern wilderness lodge sitting on a bluff overlooking the river. In front of the new lodge is Rapids Hunting Lodge, the original log roadhouse that Mike and Annie Hopper have been restoring.

“I just fell in love with this old building, one of the first roadhouses on the Valdez Trail,” says Annie as we sip iced tea on the deck overlooking the structure. “Our plan is to restore it to tell the history of roadhouses and of the Valdez-Fairbanks Trail.”
The Dodge is parked outside the old roadhouse and looks perfectly at home, the antique car and the historic building being of the same era. I’ve booked a room at the lodge and the rest of our crew hunkers down for the night in the RVs alongside the road. As I discover, RVing for Alaskans is different from most of us. Alaskans often bypass campgrounds and simply pull off the road for the night. Tonight it’s along the roadway; tomorrow we camp at a wayside. And motorhomes here are less about looks and more about function. For example, the air-conditioning unit on Willy’s 1994 Coachmen sports a big hole where a raven struck it; near the coach’s entry door, there’s a large dent where a moose kicked it. The rig runs fine and that’s good enough. Even the RV food is different. In the evenings, we dine on moose burgers and moose tenderloin and Copper River salmon caught in local rivers by Ray and Don. It’s all part of this Alaskan adventure.
After a restful night, we head out under blue skies. We are driving toward eight 10,000-foot snowy mountains dotted with glaciers. At several points, we see the Trans-Alaska Pipeline System (TAPS), a massive 48-inch steel pipe that snakes 800 miles from Alaska’s North Slope to Valdez, the closest ice-free port. It crosses frozen tundra, boreal forest, 34 major rivers and some 800 smaller streams, major earthquake faults and three rugged mountain ranges. As we pull off at an interpretive site, we read about this engineering wonder and learn that the pipeline was constructed on girders to allow it to flex with earth movement. In 2002, a magnitude 7.9 earthquake caused the ground beneath the pipeline to shift 13 feet! Fortunately, not a drop of oil was spilled.

We also pause at Richardson Monument, a broad valley dividing the Tanana River Basin and the Copper River Basin. It’s also the site where Arctic Man, an extreme ski competition, is held each April.
The Dodge is holding up well and, when we stop at mirrorlike Summit Lake, a tour bus pulls up, spilling out 40 passengers who swarm excitedly around the car and snap photos. “We heard you were doing this trip,” says the bus driver, pumping Ray’s hand. “I told my passengers we’d find you.”
We stop at more roadhouses – Paxson Lodge, Meier’s Lake, Sour­dough. The Meier’s Lake Roadhouse original building, a large, three-story affair, still stands, but at Paxson Lodge, a jumble of tumble-down logs is all that remains of the historic log structure.
We pass through heavily forested slopes and Willy says, “You can’t imagine what early travelers went through on this highway. The road wasn’t as wide as the lane we’re driving in. Branches from trees stabbed the radiators. When you bought a ticket to ride in a car like this old Dodge, you agreed to help out no matter what happened. That included getting out and pushing.”
Today the road is flat and wide with only occasional frost heaves breaking the pavement. It’s also a lonely highway with long stretches of tundra and vast stands of tamarack, birch, and black-and-white spruce between the occasional roadhouse or settlement.

The group makes a quick stop on its way to Sourdough Roadhouse.

On our third day, we make the final push into Valdez. I climb into the passenger seat of the Dodge with Steve driving. Top down, the morning air is cool and the sun warms us as the little car churns up Thompson Pass, one of the highest spots on the Richardson. We climb up and up and a cold fog settles over us. I pull on my fleece, my teeth chattering. Near the top the fog is so thick we can barely see the taillights of Ron’s RV up ahead.
“Anyone who sees this car coming out of the fog must think we’re a ghost from the past,” says Steve, gripping the wheel tightly and straining to see through the blanket of gray.
We crest the pass and begin to descend and pull over to put the car into the trailer. Without lights, it’s too dangerous to drive the Dodge in this fog.
A few miles later, just outside of Valdez, the guys unload the car. All five of them pile into the little car and, with the women driving the RVs and the pickup, we parade triumphantly into Valdez – just like Bobby Sheldon did more than 100 years ago.
If you’d like to see Sheldon’s 1905 Runabout, it is currently on loan from the University of Alaska Museum of the North at the Fountainhead Antique Auto Museum (907-450-2100, www.fountain
headmuseum.com) in Fairbanks.