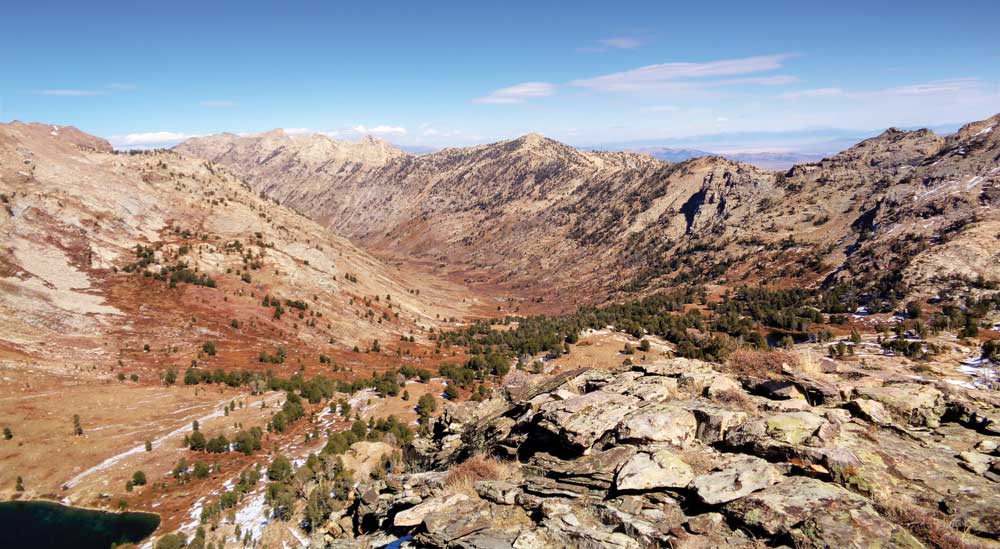 Our first glimpse of the Ruby Mountains as we approached them from Elko, Nevada, wasn’t particularly impressive. For a range that stretches 80 miles, it seemed to rise rather unspectacularly from the parched basin floor. It wasn’t until we headed up Lamoille Canyon Road, also known as the Lamoille Canyon Scenic Byway, that we discovered the true beauty of the Ruby Mountains.

We were just above 7,000 feet on the good two-lane road when we were treated to views of stunning polished-rock walls created by glacial action millions of years ago. Steeply carved granite mountains surrounded us, and our perspective included U-shaped canyons and hanging valleys. Multiple creeks rushed downhill or meandered in the flatter green meadows, with their course affected by abandoned beaver dams. Even in summer, several waterfalls appeared in the towering 10,000-foot peaks. It’s understandable why the U.S. Forest Service refers to Lamoille Canyon as Nevada’s Yosemite, while others have called it the Grand Canyon of Nevada.

The drive up Lamoille Canyon is beautiful enough to satisfy people who think they’ve already seen handsome canyons. The glacier-formed walls are spectacular, and there is much more to see and do. Beyond camping, you can hike, bike, rock climb, fish and hunt in the canyon, and when you get your fill of those, you can explore other sections of the Ruby Mountains and the surrounding area.

To get settled so you have time to explore, one campground in the Humboldt-Toiyabe National Forest accommodates RVs along the 12-mile road. Thomas Canyon Campground is attractively set in pine and aspen groves, with 40 sites and the basic services of water taps, fire rings, trash bins and clean restrooms, thanks to the outstanding camp hosts we experienced. If you require electric hookups, you’ll need to stay down on the flats.

Two for the Road: Beartooth and Chief Joseph Highways

For anglers, the lower creeks are stocked, though catch-and-release fishing is encouraged. Several lakes are accessible along the nearly 40-mile Ruby Crest National Recreation Trail. If you are willing to hike a few miles, you can fish Island Lake and Dollar Lakes at 9,600 feet, Lamoille Lake at 9,700 feet, or Liberty and Castle lakes, which are just over the 10,450-foot Liberty Pass.

For backpackers, the four- or five-day hike along the Ruby Crest Trail begins at the Road’s End parking lot at the end of Lamoille Canyon Road. For a shorter trek, you can hike just
a section of the trail.

A lovely 5-mile round-trip hike through Thomas Canyon from the campground leads to the bowl-like end of the canyon. Beaver ponds, waterfalls and verdant meadows line the trail. The Talbot, Right Fork and Changing Canyon trailheads can also be accessed off the lower sections of the canyon road. 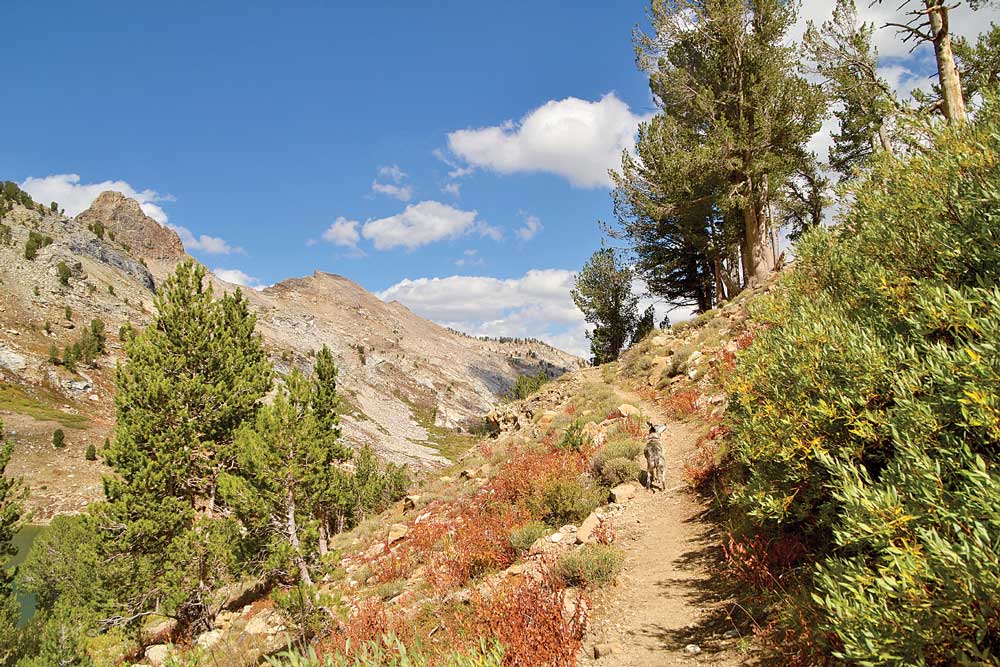 One of the gems of the Ruby Mountains, the Ruby Crest National Recreation Trail starts at the end of Lamoille Canyon Road. From there, it’s a 6-mile-round-trip hike to Liberty Pass, with breathtaking alpine-lake views.

Equestrians have their own trailhead that leads out from the Road’s End parking
lot toward Lamoille Lake. Rock climbers can take their pick of sport climbs, rope routes or bouldering. Winter visitors can go cross-country skiing, snowshoeing, snowmobiling, sledding and even helicopter skiing.

Lamoille Canyon isn’t the only appealing spot in the Ruby Mountains, but it is a great place to make your home base while exploring what lies in the surrounding area. On the southeastern side of the mountains is Ruby Lake National Wildlife Refuge, which can be reached by a combination of paved and dirt roads. Located in the southern end of Ruby Valley, the remote refuge consists of a 16-mile network of spring-fed marshes, grassy areas and brush-covered foothills.

For hard-core cyclists, the 14th annual Lamoille Canyon Hill Climb challenges road riders on a steep 12-mile course through the Ruby Mountains, August 10, 2019. Sponsored by the Elko Velo Cycling Club, the race puts riders’ mettle to the pedals with nearly 3,000 feet of vertical gain on the long and winding canyon road.

Boating, fishing, wildlife viewing and waterfowl hunting are all on tap at the refuge. Since it is situated along a corridor that serves the Pacific and Central flyways, the chance of spotting migratory birds is practically certain during the appropriate seasons.

Two nearby areas that are easier to visit are South Fork State Recreation Area and the “barely there” town of Jiggs, named for a fictional character in the long-running comic strip Bringing Up Father. Both are along State Route 228 south of Elko, which is off State Route 227, the road that leads to Lamoille Canyon.

About 40 miles south of Elko, South Fork State Recreation Area surrounds a 3-mile-long reservoir. The reservoir was created when the South Fork of the Humboldt River was dammed and filled in 1995. If fishing is your thing, try casting for trophy-size rainbow and brown trout. In winter, there’s ice fishing.

Jiggs is farther down Route 228, and whether you drive the paved highway or miss the turn from South Fork Recreation Area and end up on a dirt road, you’ll wonder what you are getting into. Aside from a few cattle ranches, there’s not much to see.

Then suddenly, there it is, and you’ll get it all in one glance: the modern red schoolhouse, the old brick Jiggs Hotel, Jiggs Bar and finally, the original white schoolhouse.

Clearly, the bar is the major point of interest, as shown by the yellow road sign posted 20 feet before reaching the saloon. It’s the only highway caution sign I’ve ever seen that shows a cowboy tilting his head back to take a swig of something. The barmaid swears that
no one knows where the sign came from. 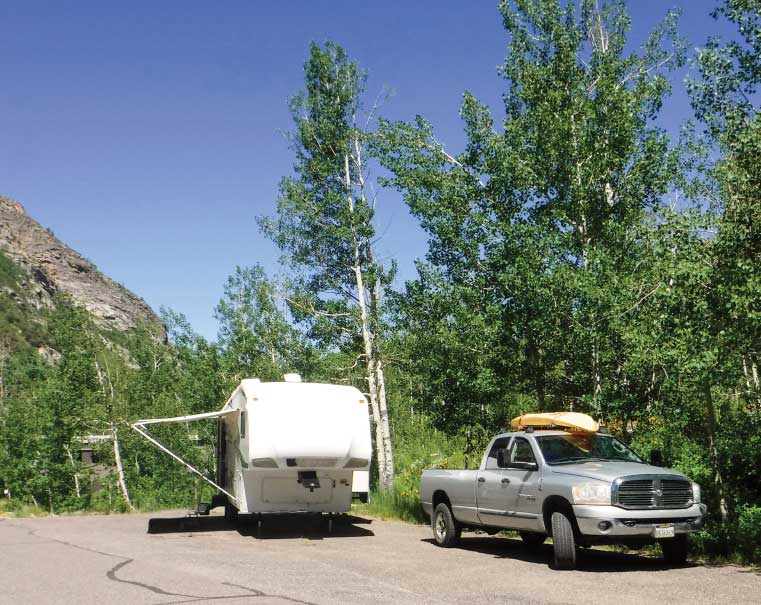 An ideal base for exploring Lamoille Canyon, Thomas Canyon Campground, at an elevation of 7,200 feet, has 40 sites and a creek with brook and rainbow trout.

If you made the 28-mile drive down Route 228, be sure to stop in and see the bar. There’s lots of history, as shown by photos on the walls, the barmaid’s tales and a historical cookbook offered for sale. Besides that, the beer is cold and the people are friendly.

We spent a week based in Lamoille Canyon and didn’t have enough time to see everything in the Ruby Mountains. If you go, chances are, you’ll be equally enchanted.

To reach Lamoille Canyon, take Interstate 80 to Elko, then follow State Route 227 southeast for about 25 miles. Before reaching the town of Lamoille, turn right on Forest Road 660, aka Lamoille Canyon Road and the Lamoille Canyon Scenic Byway. The route extends 13 miles into Humboldt-Toiyabe National Forest and ends at a picnic area near the base of Ruby Dome.

HUMBOLDT-TOIYABE NATIONAL FOREST
Located 33 miles from Elko, just off Lamoille Canyon Road, Thomas Canyon Campground offers views of the Ruby Mountains and access to the Thomas Canyon Trail. Each dry campsite has a picnic table, campfire ring and grill, and vault toilets and drinking water are on-site. Reservations are available through September 8 this year, after which campsites are first-come, first-served through October 27.
www.recreation.gov/camping/
campgrounds/232112