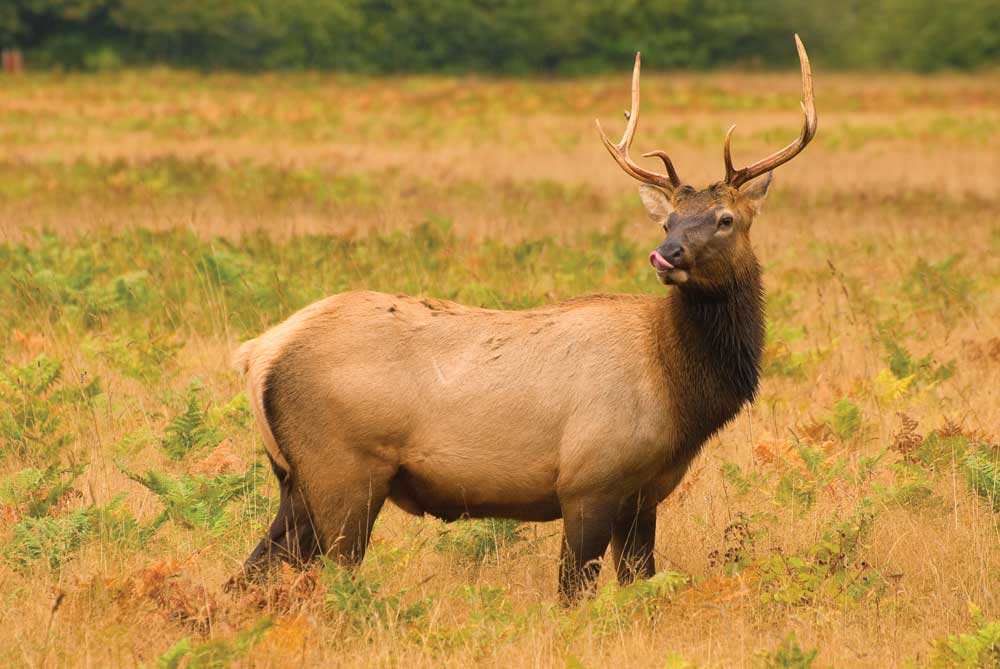 The year 2018 rolls out two solid reasons for visiting Northern California and its Redwood National and State Parks (RNSP): This year marks the 100th anniversary of the citizen/nonprofit Save the Redwoods League and the 50th anniversary for the national park.

The park and the preservation group own a locked story. League purchases saved the old-growth redwood groves that ultimately became Jedediah Smith, Del Norte Coast and Prairie Creek redwoods state parks. Then, in 1968, the national park protected the critical lands encompassing those state parks. Not coincidentally, the birth of the national park was timed with the League’s 50th anniversary.

The first push to establish a national redwoods park was put forth in 1919, by none other than Stephen Mather – the first director of the National Park Service, and an early founder and supporter of Save the Redwoods League (fun fact: the NPS logo includes a redwood tree). But the political climate for action didn’t fall into place until 1968, when an environmental awakening of sorts swept the nation.

A majestic Roosevelt elk hams it up for a photo op.

The rapid, wholesale logging of coastal redwoods in the early 1900s prompted a trio of distinguished paleontologists to form Save the Redwoods League in 1918. Their mission was simply that: Save the redwoods, which is a mission that has equal urgency today. Modern threats include not only the cut of the saw, but also government budgets, which steal funds from the oversight and protection of the magnificent trees that have survived millennia. Through donations and matching funds, the League continues its mission, purchasing critical redwood stands. But the League was not the lone, or even the first, crusader. In 1902, the Sempervirens Club (coast redwoods are sequoia sempervirens) led a spirited campaign that resulted in the formation of Big Basin Redwoods State Park, California’s oldest state park.

Visitors to RNSP and other redwood parks and reserves will witness memorial redwood groves and dedication benches that hint at the League’s footprint. The League started its memorial grove program in 1921. The current count sits at more than 1,000 honor groves, dedicated to individuals and organizations like women’s and garden clubs. Park interpretive boards acknowledge the League’s role in the creation and growth of parks. Because of the League, this and future generations can wander and wonder among the giants. 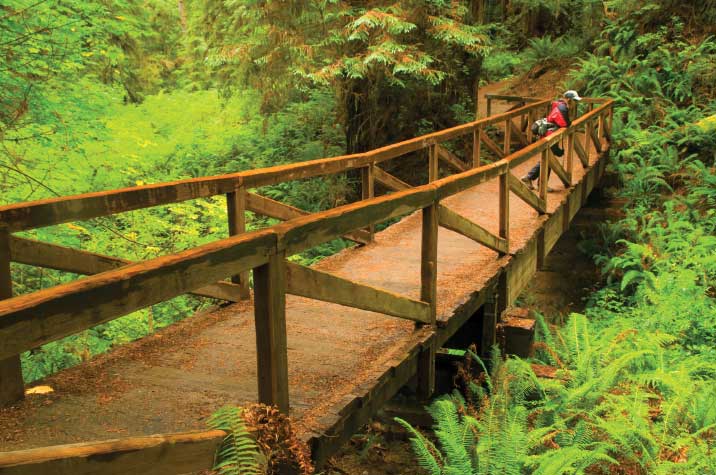 Redwood National Park hit the map in 1968, and first lady Lady Bird Johnson attended its dedication. Because California opted to continue its legacy with the three state parks, RNSP holds a unique management structure of cooperation – and a rather long name.

RNSP is recognized as a UNESCOWorld Heritage Site and International Biosphere Reserve. The park protects 45 percent of California’s remaining old-growth redwoods; only Oregon, at the northern edge of the tree’s growing range, has any other coastal redwoods, and only two small groves at that.

The protective lariat of the federal park also enfolds areas of second-growth redwoods. These areas stand as a buffer between domain lost and the old-growth splendor. Because of its reach, RNSP serves as a living laboratory for studying and perfecting practices of restoration and for monitoring forest health. While second growth helps preserve the health and longevity of the old-growth trees, it also banks on the future.

Coastal sections complete the park’s mosaic. What would a redwood forest be without its coastal influence of clouds, fog and mist? Besides the nurturing those conditions bring, they lend to a mystical aura to the church of the big trees. No matter if it’s the first visit or the 100th, each audience holds the freshness and magic of first sight.

California’s Redwood Highway, U.S. Highway 101, stitches together the far-flung units of this national park, stretched from Crescent City to Orick (a distance of 42 miles), and covering 132,000 acres (federal and state).

Five visitor centers serve the park: Crescent City at the northern gateway, Hiouchi on U.S. Highway 199 and Kuchel (at Orick) is the southern gateway. The two others sit within Jedediah Smith Redwoods and Prairie Creek Redwoods. Be sure to pick up brochures for trails and drives, and to ask about current closures and seasonal footbridges. Park brochures indicate roads considered unsuitable for motorhomes. 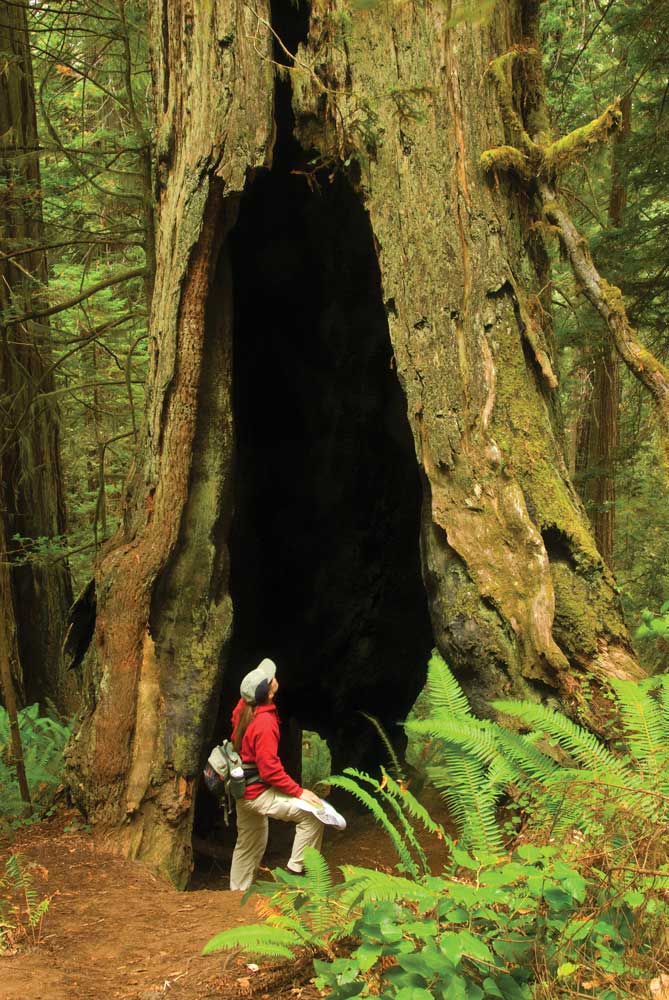 The elevation of Lady Bird Johnson Grove allows for more sunlight to shine on the trees.

Four developed campgrounds within the state parks serve visitors. Jedediah Smith has sites suitable for 36-foot motorhomes, Mill Creek (open seasonally) 31-footers, Elk Prairie 27-footers and Gold Bluffs Beach can accommodate RVs up to 24 feet. None of the campgrounds have hookups, and reservations are recommended (800-444-7275, www.reservecalifornia.com).

At the park’s northern extreme, Jedediah Smith Redwoods State Park serves up wondrous dark, magical redwood groves along the Smith River. The Smith is the longest major free-flowing river left in California, and an attraction unto itself.

Accessed by rutted road or by foot trail when summer hiker bridges are in place, magnificent Stout Memorial Grove laid the cornerstone to this park. Whatever challenges stand between you and Stout Grove are worth overcoming. This hall of giants stands supreme. Heads tilt, fingers point and words of awe fall short.

Other named groves sit just off U.S. 199 and offer short hikes in grand company. Giant trees and snags and logs, burls and rootballs, eruptions of fern, carpets of tiny redwood sorrel and the enveloping shadow and rich earthy smell contribute to the overall spell. Banana slugs and true salamanders may slip among the fallen redwood needles, decaying wood and moss. And, shafts of sunlight add to the reverence.

South on U.S. 101, Del Norte Coast Redwoods State Park straddles the highway. Visitors to this park find much of it cloaked in pleasant, decades-untouched second-growth redwood forest and punctuated by big-tree memorial stands.

These younger redwood forests have their own feel and discovery. While they lack the deep darkness and imposing command of the old-growth forests, they still present remarkable towering trees, rich red trunks, reproduction tree rings (sometimes dubbed “fairy rings”) and more sunbeams for more rhododendron. Plus, they offer soft footfalls, dripping canopies and invitations to stand silent for a moment.

By this point, park visitors may have noticed a lack of named trees. In redwood management, there’s a movement away from naming and pointing out record-size trees because each redwood has merit, and bringing attention can also bring threat to the trees. Although record-setters are still noted, precise locations are no longer broadcast. 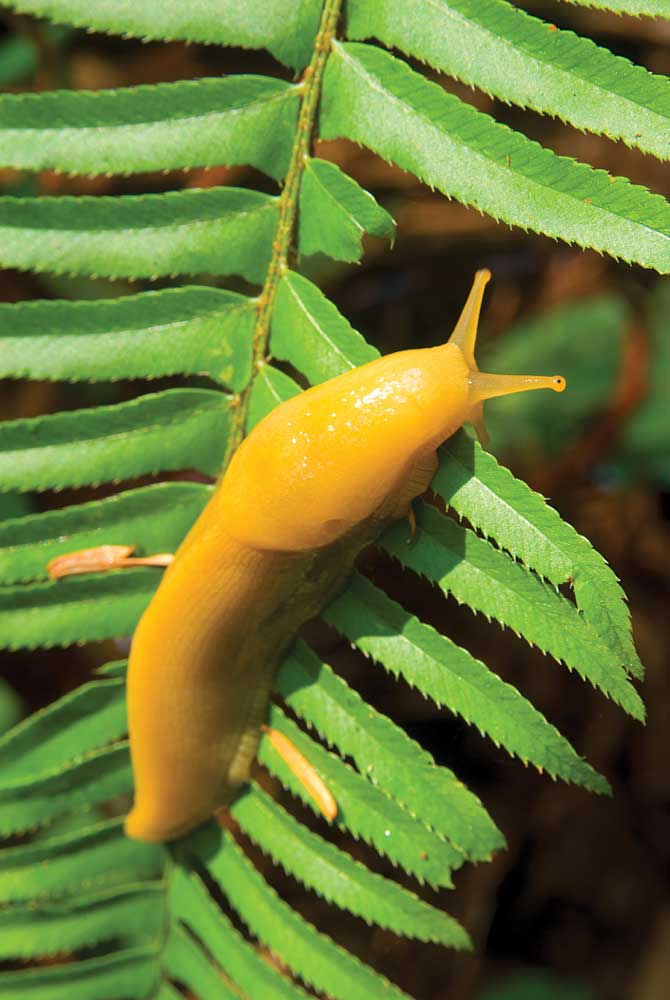 Banana slugs, like this one resting on a sword fern along Prairie Creek Trail, secrete a mucus coating capable of numbing the tongues of potential predators.

For exploring, any of the named trails off Newton B. Drury Scenic Parkway will satisfy with glorious big trees. Simply pick a trail, as each holds a mini wonderland. Some follow streams, others lead to fern canyons. One need not walk far, and many big trees face off right along the Parkway. For safety, use turnouts when ogling.

Deer and elk frequent the open meadow that lent its name to Elk Prairie Campground (no hookups or dump station). Motorhome parking for elk viewing is roadside along the Parkway, adjacent the meadow. Despite the peaceful demeanor of the elk as they feed, the animals are wild. A few have charged guests and rangers, so keep behind fences.

In the southern extent of RNSP, Lady Bird Johnson Grove – the dedication site for the national park – proves a popular draw. Paved Bald Hill Road accesses the grove’s trailhead. Because this road leads to working forest beyond the park and logging trucks are common, travel no farther than the trailhead in a motorhome.

The elevation of Lady Bird Johnson Grove and its proximity to second-growth redwood forest introduce more sunlight to the grove, creating a different emotional feel here from elsewhere in the park. Grand trees inspire, as do the seasonal rhododendron blooms and the tiny blooms of redwood sorrel, redwood violet and trillium. Eyes dance from floor to sky.

All redwood forests serve up wonders of scale, wonders of wonder – a recipe for unhurried viewing. Hats off, Redwood National and State Parks. Happy 50th! 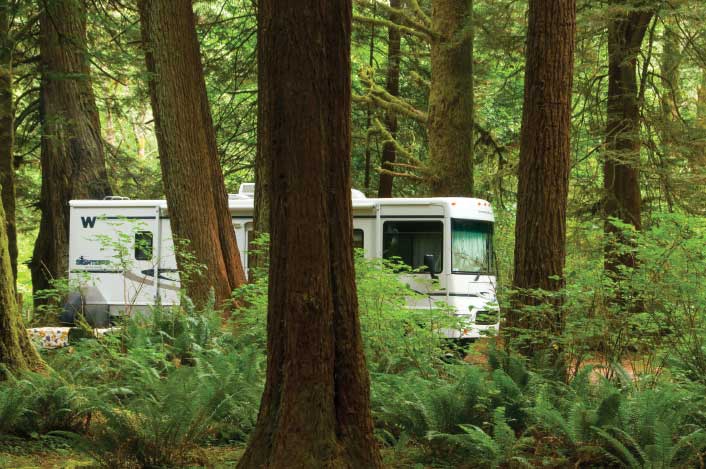 Campgrounds in Prairie Creek Redwoods State Park are surrounded by tranquil, natural beauty; motorhomes are restricted to 27 feet or less in length.