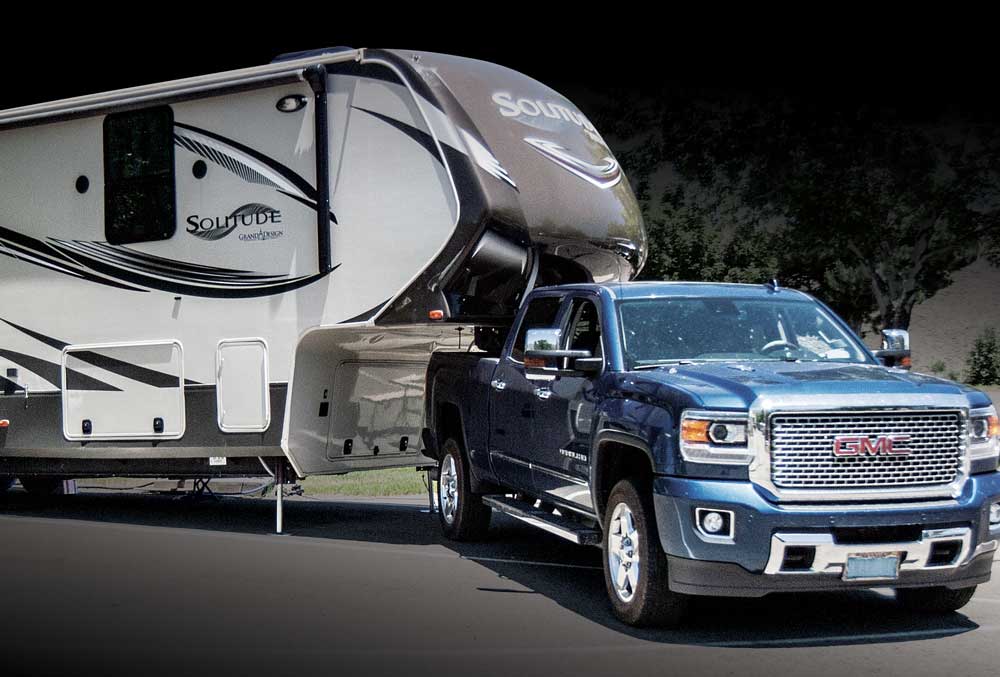 Demco’s lightweight fifth-wheel hitch is compact and easy to handle yet capable of towing up to 21,000 pounds

For those choosing to wander with a fifth-wheel, the right hitch is a key ingredient. No matter the choice of tow vehicle, it’s inevitable that you’re going to have to spend a few bucks on a decent fifth-wheel hitch, so spending wisely on quality, safety and confidence should be the first priority.

Finding the right hitch can send you into sensory overload after perusing the internet and heaps of information provided by various suppliers. Add in options for specific towing needs, and the list gets even longer. Since most fifth-wheel hitches occupy a big portion of the truck-bed space, owners who also need to use the truck for more utilitarian purposes generally remove the hitch when not towing — or at least, they would like to do so. Hitches that are too bulky and heavy to maneuver by one person typically stay put, limiting the use of the bed.

The dual-articulating head made it easy to hitch up at an angle. The locking arm is smooth, and the operator feels confident that the jaws have secured the kingpin.

Demco’s RV Towing division has a solution, the new Recon 21K lightweight hitch, which is designed for easy removal while still providing a solid connection for towing fifth-wheel trailers up to 21,000 pounds.

Demco dates back to 1950 when it started manufacturing agricultural equipment under the Dethmers name. Today the company is engaged in dinghy and trailer towing products, and the Recon fifth-wheel hitch is its latest endeavor. The Recon 21K hitch we installed and tested isn’t one of those hefty sliding models that pushes the weight envelope; its 95-pound weight can be handled by most owners.

The Recon 21K kit can be purchased with the hitch base, head assembly, universal truck-bed rails and necessary hardware. Photos by Kevin Livingston.

The Recon 21K is made of a quadruple-sided, triangulated series of specially bent and welded steel plates, which are completely connected at the bottom, creating a solid A-frame-style structure. Building the hitch in this manner allows for increased strength and rigidity while decreasing weight.

Although the Recon 21K is somewhat simplistic in design, its claim to fame, so to speak, lies in the dual-articulating head assembly and the ability to easily separate the head and base for removal. The hidden gem is the super-smooth wraparound latching mechanism that operates with a lever that has a hairlike “trigger.” The hitch components and necessary bed-mounted frame rails have a glossy black, powder-coated wrinkle finish.

We mounted the Recon in a 2015 GMC Sierra Denali pickup that pulls a 38-foot fifth-wheel. The procedure involves mounting industry-standard bed rails that are used for virtually all fifth-wheel hitches on the market. The installation requires positioning the rails according to the manufacturer’s instructions, then fastening the vehicle-specific frame brackets, which usually takes four bolts through the bed and rails, along with two bolts for each frame bracket going directly into the frame. The brackets are bolted through existing holes in the frame.

If you’ve never installed base rails, be advised that the four frame brackets must line up with the holes in the rail, and that takes some finesse. Don’t count on getting too much advice from the rather basic instructions.
[satellite gallery=7 auto=off thumbs=on] Installing the rails is like assembling a puzzle. Although RV technicians have their own ways of accomplishing this, no matter what technique is employed, the measuring process must be precise and follow the instructions provided with the kit. To avoid damaging your truck bed, be sure to take extra time here — measure at least twice and drill once. The hitch point needs to range from directly over to 3 inches ahead of the rear axle.

The hole diameter for the rail bolts is 5/8 inch, and while you could try to throttle through the bed with a drill bit that size, it’s best to start with pilot holes to confirm lineup with the frame brackets, then use a couple of smaller bits and work up to the 5/8-inch final hole. It’s likely that if you use the largest drill bit first, it will try to walk sideways because of the corrugations in the bed floor, throwing the hole locations off and skewing the entire installation. A step bit also works well for this.

Once the two rear holes are drilled, two carriage bolts are run through the rail and bed using washers and nuts. At this point, the hitch base can be assembled and temporarily pinned to the rails so it can be used as a template for drilling the holes in the other rail.
After all four holes have been drilled, the bolts from the rails can be used to confirm that the locations of the frame brackets are right. If your measurements are on target, the brackets will line up with the holes in the bed; if not, you’ll have to make slight adjustments. Right before the rails can be bolted to the brackets, put the appropriate slotted spacers between the bed floor and the frame brackets, eliminating empty pockets in the corrugations and creating a solid metal sandwich.

For the under-bed process, having a car lift or a friend with one will be worth its weight in gold. If not, get the back of the truck as high as you can and stabilized with jack stands. Depending on the specific truck and its frame brackets, you could be facing an uphill battle trying to find access for all nuts, bolts and associated hardware. For this installation, it was necessary to route the 2-inch carriage bolts and bolt plates through larger inner-frame holes via the supplied fish wire. All the nuts are then torqued according to the chart in the instructions.

From here, the only thing left is to determine the ideal height and pin location for the head mount, followed by securing the setscrew and locknut. Three height adjustments, from 15½ to 18 inches, make it possible to accommodate just about any fifth-wheel. The final large pin is inserted through the upright casting (head mount), the head assembly is installed, and you’re ready to tow.

The dual-articulating head made it quite comfortable to hitch up the fifth-wheel on uneven terrain and at various angles, and as previously noted, using the locking arm is smooth and secure. We were impressed with the simplicity of the design, especially when considering the Recon 21K can handle sizable fifth-wheels.

The USA-made hitch is backed by high-quality components that should provide trouble-free service for many years. Maintenance is fairly simple using WD-40 or light oil on the locking arm, and grease is used for the pins. Fasteners should be checked every 2,000 miles of towing, and grease applied to the saddle surface, unless a Teflon fifth-wheel lube plate is mounted around the kingpin.

For those who also employ their truck for ranch, farm or business use and have a gooseneck ball already mounted in the bed, Demco will be offering an application of the Recon hitch in January 2018 that will drop on to any 25⁄16-inch gooseneck ball
and convert it to a fifth-wheel hitch. It will be unique to the marketplace in that it is compatible with any gooseneck ball while maintaining the traditional fifth-wheel head that is on the current Recon. The Recon Gooseneck will have an MSRP of $695.

Retail price for the Recon 21K kit that includes the hitch base, head assembly and bed rails is $774; the frame brackets have a $176 MSRP. Other than the aforementioned instructions, which could be improved, the Recon 21K turned out to be rock solid and a super-easy hitch to handle.