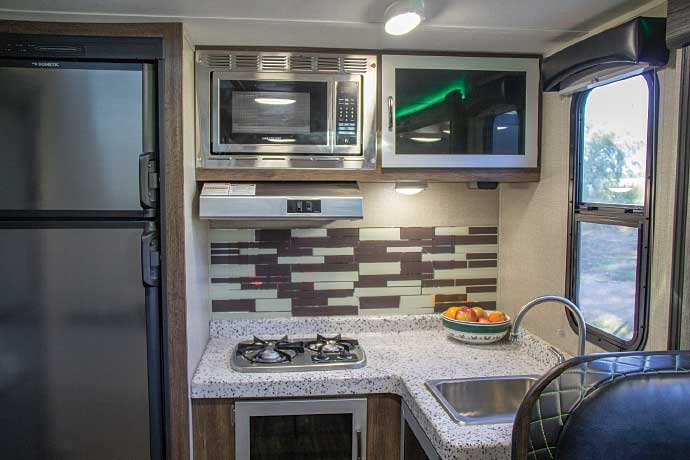 The New Paris, Indiana, manufacturer specializes in lightweight trailers that can be towed with most SUVs and also builds compact truck campers. The 21-foot, 7-inch F-22RK is one of six 2018 floorplans available in the Falcon GT line and weighs 3,340 pounds unloaded. After spending some time with it, we discovered that it’s a study in efficiency, featuring an impressive amount of storage inside and out for its size.

Pizzazz is added to the interior with green LED lights above the slideout’s frame and below the dinette that coordinates with the bright-green Falcon logo and stitching in the dinette’s two-tone leatherette bench seats. Converting the dinette into a 68½-inch-by-40-inch bed is easier with two people because of the two-post table.

On the wall opposite the dinette is a large mirror with a touch-screen on/off switch for the LED-illuminated border. Lighting throughout is excellent with large push-button LEDs. Granicote countertops are used in the kitchen, on nightstands and the dinette’s rounded-edge table.

The kitchen packs in ample counter space and cabinetry, and has a 6-cubic-foot fridge.

Throughout the trailer are aluminum-framed cabinets with dark tempered glass, and there’s impressive room in the L-shaped kitchen. Almost 2 feet of usable counter space (width and depth) extends between the two-burner range and single-basin sink, and the countertop’s lip continues up the wall an inch or so. The one-piece mirrored backsplash with a print on it is lovely, and there’s a window over the sink so a view to the outside can be enjoyed. Overhead is a microwave, below are pullout drawers on glides, and a 6-cubic-foot RV refrigerator is next to the entry door. 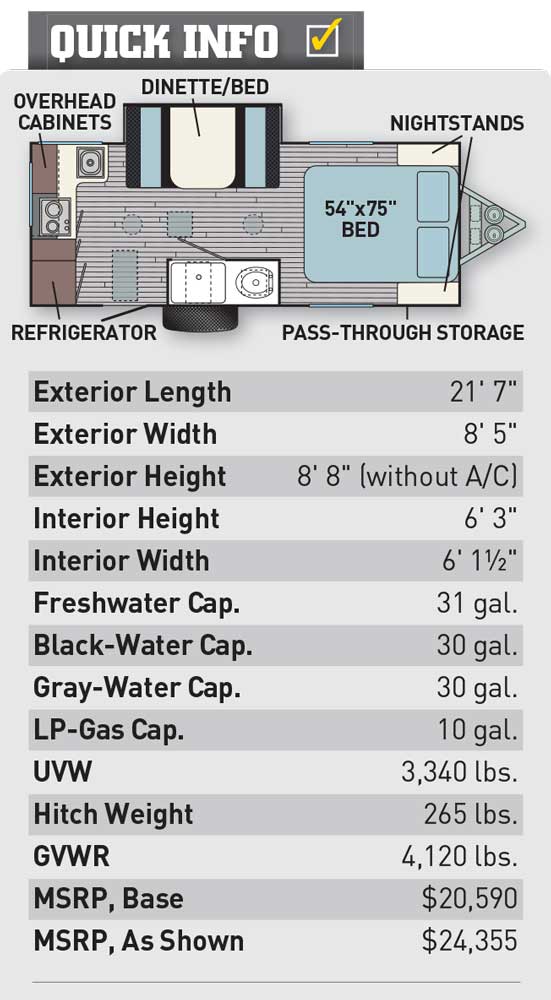 A 54-by-75-inch full-size bed is tucked up, island-style, under the aerodynamic front cap, which leaves about a foot of walk-around space on each side and provides extra legroom for tall folks. About half the space under the bed is allocated to storage, accessed by lifting up the end of the bed, while the other half is dedicated to the exterior’s pass-through storage.

Nightstands (no storage) stretch half the length of the bed, and each side has a GFCI outlet and a charging center with a 12-volt DC outlet and a USB port. The front cap’s dramatic slope limits occupants from sitting up in bed to read or watch the 32-inch LED TV (HD antenna standard) attached to an articulating bracket on the wall at the end of the bed. The TV can be viewed from anywhere in the trailer, though care should be taken where it is positioned in relation to the tempered-glass bathroom door, so someone doesn’t knock the door into it. The Dometic thermostat is hidden behind the TV, a plus that could prevent unauthorized use by kids who like to press buttons.

The compact wet bath feels less confining due to ample light with the glass door, skylight and Fan-Tastic Vent. The step up into the bathroom is about 10 inches, so headroom is lost, except where the skylight offers 6 feet, 2 inches of space. The plastic toilet is set in the corner of the 20-inch shower pan, which opens up a tad more standing room when showering. Niceties include a shower curtain, a showerhead with a shutoff valve, and a towel hook. 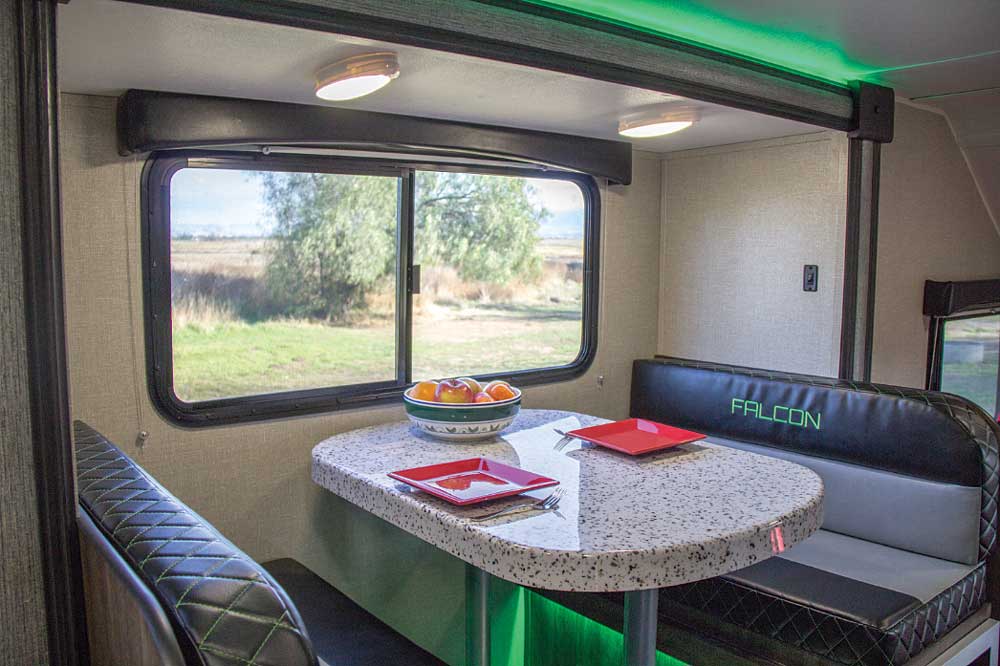 Individually controlled LED light fixtures are positioned throughout the
interior. The dinette is accented with green LEDs above and below and a large sliding window.

Struts on the entry door keep it from opening into the diamond-plate fenders that cover 18-inch rims and 10-inch-wide Michelin Premier LTX tires. Standard is a Kicker-brand exterior stereo with marine-grade speakers, independent of the interior stereo, and a TV bracket on the side wall so the 32-inch TV can be moved outdoors and played through the exterior’s stereo and speakers.

An island-style bed tucks under the dramatically sloped front cap and has storage beneath.

The A-frame houses a factory-supplied battery and a pair of 5-gallon LP-gas cylinders. A Lippert Smart Jack with a 9-inch-diameter foot pad and memory setting has LEDs that shine down on the ball and coupler for nighttime use. There’s an outside sprayer, and the 30-amp electric hookup is at the back of the trailer. Bullet LED lights are attached to the exterior’s wall below the manual 10-foot awning and the porch light is a push-button, helpful for seeing the door handle and lock when walking up to a dark trailer. The Falcon GT logo pops out against the Graphite Metallic aluminum exterior.

The GT F-22RK is a small-footprint travel trailer that doesn’t skimp on amenities, offers good storage and can be launched with many adventure-seekers’ everyday vehicles. Kay
Trietsch, cowriter for this Walk-Through, summed it up well when she described the GT as having “a comfortable interior and a smart layout with not an inch of wasted space.”

Trailer Life Managing Editor Donya Carlson grew up camping with her family in Southern California and loves spending time hiking, mountain biking, motorcycling, snowboarding and just about anything else outdoors. Before joining the Trailer Life and MotorHome team, she served as managing editor of Rider, a magazine for motorcycle enthusiasts.