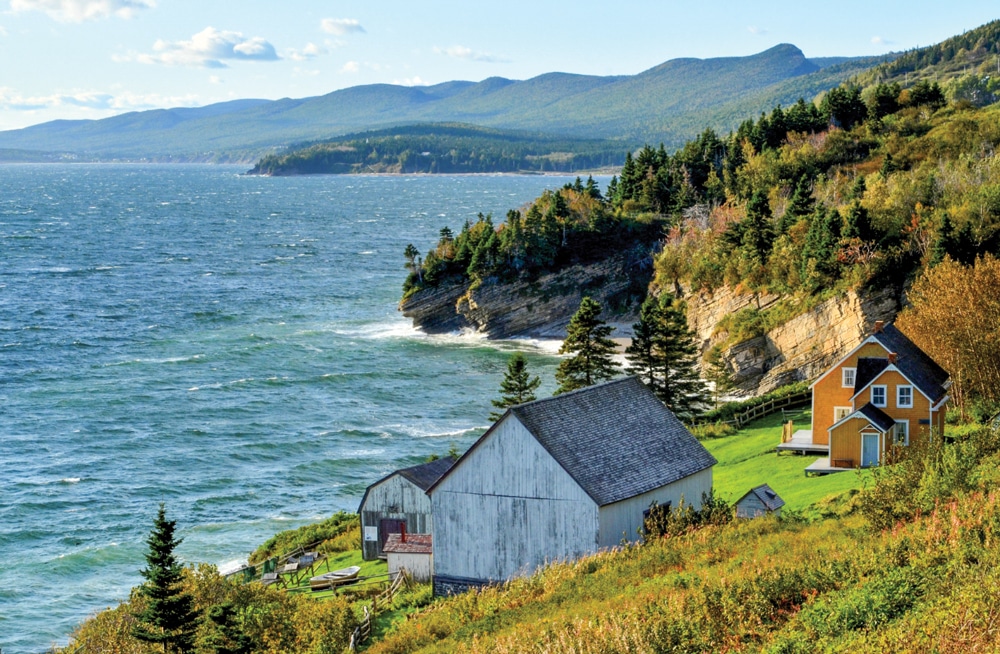 Camping by the water, eating fresh seafood and driving from one French village to the next? Sounds like a bucket list summer vacation to me. But my husband, Bob, and I weren’t up for the hassle of flying to Europe after a hectic year. Instead, we loaded our 25-foot Class C motorhome and drove to Canada’s Quebec province seeking relaxation and a taste of France much closer to home.

After an easy border crossing on Interstate 87 from New York we drove north along the St. Lawrence River from Quebec City to the town of Rimouski for food, fuel and a point of interest: the Pointe-au-PÃ¨re (father point) Lighthouse National Historic Site. Arriving in a cool drizzle, we ducked into a museum to learn about “Canada’s Titanic,” a Liverpool-bound ocean liner called the Empress of Ireland. Early on the morning of May 29, 1914, some 1,012 people died when it sank in 14 minutes after being rammed in the fog by the Norwegian coal ship Storstad.

After watching a multimedia presentation (offered in both French and English), we looked at cases of artifacts – a wooden deck chair, china plates, a ship’s bell, a baby bottle and more – brought to the surface by divers from wreckage that still lies 130 feet down on the river floor just 5 miles offshore.

We crossed the street to see the Pointe-au-PÃ¨re Lighthouse built of concrete in 1909 in an unusual flying-buttress design that soars 108 feet to the top. Tickets to the site gave us the opportunity to climb its 128 steps on a guided tour and to walk through the nearby Onondaga, a decommissioned submarine that served the Royal Canadian Navy from 1967 to 2000.

Driving 11 miles to our campground, we entered the GaspÃ¨sie region on coast-hugging Highway 132, our clockwise route for the next 10 days. At St. Flavie, we pulled into Capitaine Homard (“lobster captain”), a seafood restaurant with 48 adjacent campsites, an appropriate start for touring a lobster-claw-shaped peninsula famous for its seafood.

Drive up a steep road to find Pointe-Ã -la-RenommÃ©e Lighthouse.

A full-hookup site facing the river was ideal for relaxing and enjoying sunshine and fresh breezes after sweltering temperatures back home. We walked out onto the rocky, wet flats during low tides, feasted on steamed lobster, watched spectacular sunsets and joined other RV travelers building a fire on the black pebble beach.

“What does that ‘Post de Vidange’ sign mean?” I asked my husband one morning while walking the dog. Since he had no idea either, I consulted Google Translate and laughed to learn that we had found the dump station. Despite our lack of French language skills, we could easily communicate and navigate, converting kilometers to miles for road signs and litres to gallons at fuel pumps. In a year with an unusually favorable exchange rate, our American dollars were going a long way.

The well-maintained Highway 132 led us through one simple village after another, each with a pointed church spire and string of pitched-roof cottages trimmed in white fretwork. Rainy days were brightened by roses, buttercups and lupine growing wild by the road, and blue fleur-de-lis flags of the Quebec province flapped in the breeze everywhere we went.

Many towns had a bakery, cheese shop or poissonnerie – the latter of which is a fish market, with salmon, snow crabs, mussels and other seasonal goodies. To round out our pantry, the chain of well-stocked IGA grocery stores had vegetables, wine and parking lots spacious enough for even large motorhomes. 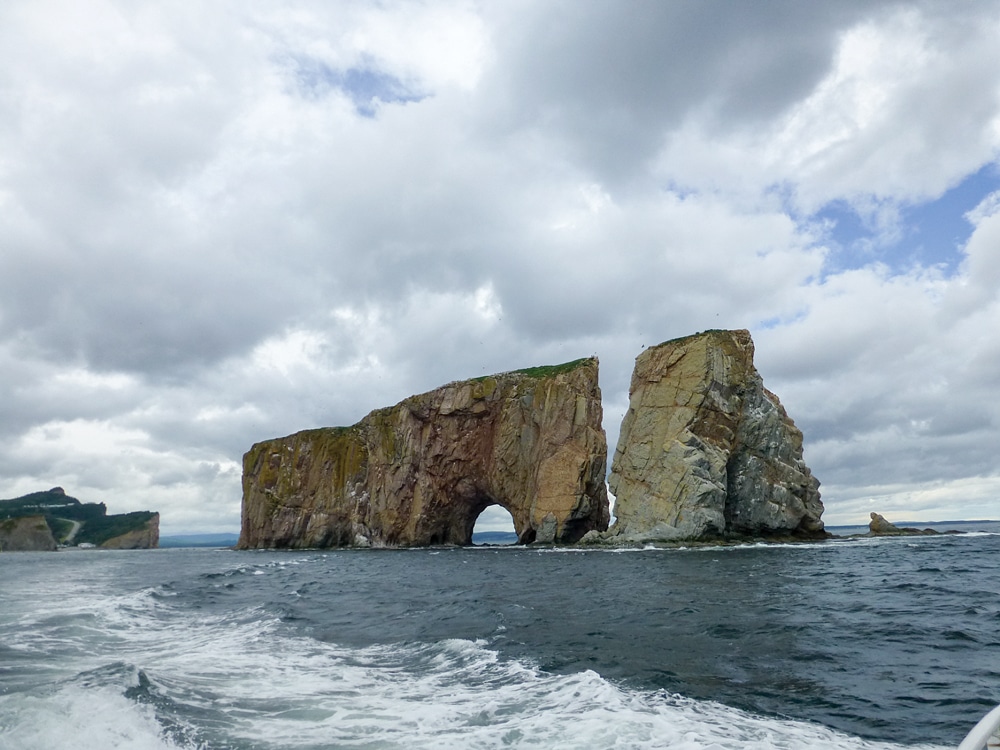 In the PercÃ© harbor, a pierced limestone island rises 289 feet.

Scenery changed one morning after we left a campground in the small city of Sainte-Anne-des-Monts. Craggy mountains loomed above the curving highway, waves sprayed the road to our left, and waterfalls streamed down on our right. Around a bend, the red La Martre Lighthouse stood out against the gray clouds and we drove up to take a look. Built in 1906, the wooden octagon stands guard, automated now but still capable of rotating its Fresnel lens in a pool of mercury by a system of weights and cables.

An hour back on the road revealed blue skies and a white lighthouse, guardian of the Cap-de-la-Madeleine coast since 1871. Managed by volunteers, the Sainte-Madeleine-de-la-RiviÃ¨re-Madeleine Lighthouse has a cafe, a small museum and the temptation of dry camping on the grounds. But with even more lighthouses to see, we continued driving, now encountering steep grades. Pulling off at hilltop rest areas brought photo opportunities, like Grande-VallÃ©e, where the church of Saint-FranÃ§ois-Xavier perches on a plateau in a cove below.

A rain-gouged, gravel side road led us up to our reward: the cast-iron Pointe-Ã -la-RenommÃ©e Lighthouse, known to be one of the prettiest in the GaspÃ©sie. Its bright crimson tower was surrounded by shingled wood buildings, green grass and views to the sea below. Called “the world’s most traveled lighthouse,” Pointe-Ã -la-RenommÃ©e was sent to Quebec City’s old port in the 1970s as a tourist draw but returned to the cliff in 1997 following a citizens’ campaign to get it back. Replicas of the lightkeeper’s house and a 1904 Marconi wireless station now house museums.

After a busy day on the road, we reached the spot where the St. Lawrence River ends and the Gulf of St. Lawrence begins, guarded by the white marble-clad Cap-des-Rosiers Lighthouse, Canada’s tallest. Named for the area’s wild roses by French explorer Samuel de Champlain, who mapped the St. Lawrence River in 1603, the “cape of roses” now marks the entrance to our destination for Canada Day weekend: Forillon National Park. After checking in and buying firewood at the interpretation center, we plugged into a 30-amp site we reserved months ahead at Des-Rosiers Campground. 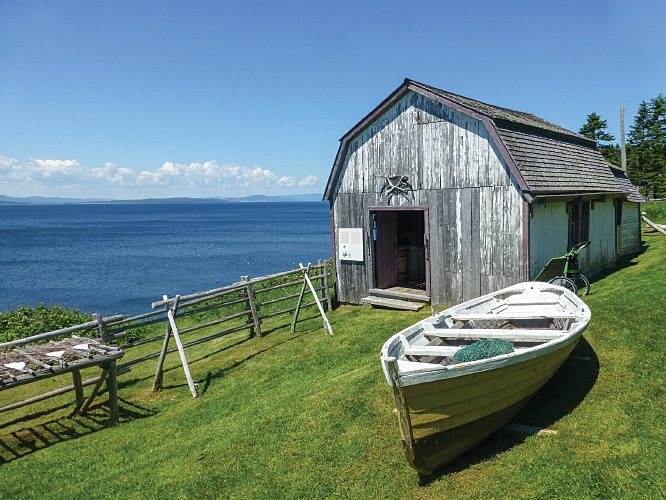 At Anse-Blanchette, learn about families who once farmed and fished in today’s Forillon National Park.

The next morning Bob started off on a hike along the Les Graves trail past coves and beaches that would lead to a lighthouse and Land’s End, the tip of the Cap-GaspÃ© peninsula. Whales spouted offshore, porcupines climbed trees, and a big-eared, young black bear cub greeted him on the two-hour hike. Meanwhile, at the Grande-Grave National Heritage Site, I toured restored homes and a general store that re-create the lives of fishing families who once farmed by the water.

In the evening we walked down the short campground path to a pebble beach for sunset views of the soaring cliffs, and over dinner talked about Forillon’s diverse beauty. Bob had seen sheets of fog roll down the mountains, while I had watched a chipmunk find breakfast in a patch of tiny wild strawberries. As if on cue, a brown porcupine lumbered through our campsite and climbed a tree.

After admiring the soaring seascapes of Cap-Bon-Ami’s cliffs the next day, we hiked the 1-kilometer (0.6-mile) La Chute (waterfall) trail humorously described as “beginner” level. To recover from the steep trail without handrails and to prepare for the climb back up, I lingered awhile at the 56-foot-tall waterfall in a large red chair. Parks Canada places them at especially scenic locations, and there were many in Forillon.

Another jewel of the GaspÃ©sie awaited us back on Highway 132 in the fog-shrouded town of PercÃ©. Bob plugged into our full-hookup site at Camping du Phare in a drizzle, and we slept soundly. The next morning’s bright sun revealed spectacular campground views of the water and clear weather for a boat ride. We reserved two seats on a 9 a.m. departure from the town wharf since, like most other visitors, we wanted a closer look at ÃŽle-Bonaventure-et-du-Rocher-PercÃ© National Park. 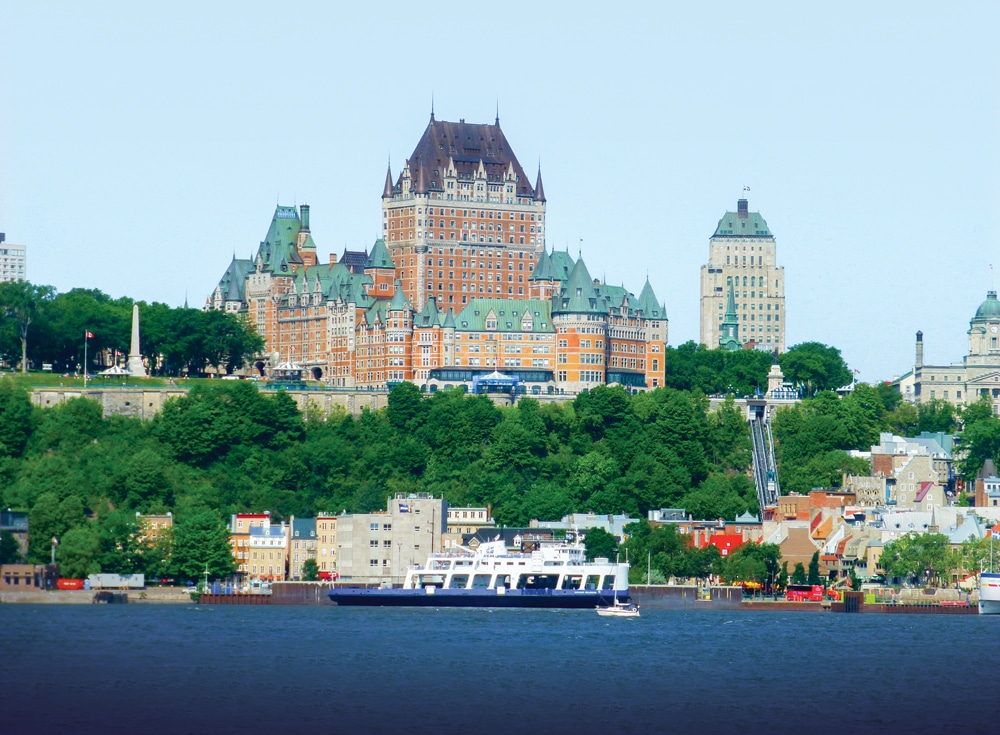 Quebec City: For a pre-GaspÃ©sie immersion into the province’s French heritage, stop first at Quebec’s charming capital. A convenient base, Camping Transit, in the suburb of Levis across the St. Lawrence River, has full-hookup sites and a free shuttle service to the nearby ferry dock. Keep your camera handy as the ferry approaches the city for a magnificent view of the landmark Chateau Frontenac Hotel in the Upper Town, easily reached by a funicular railway. Spend an absorbing day on foot exploring, shopping and lunching in the upper and lower sections of Vieux-Quebec, the old city.

Our captain headed first to the famous pierced rock in the harbor. Rising 289 feet in the harbor, this limestone island has been around at least 375 million years, and caught the attention of explorer Samuel de Champlain, who named it in 1607 for the 49-foot-tall natural arch at one end. After giving us views of Rocher-PercÃ© from all sides, our captain headed through increasingly rough seas toward Bonaventure Island.

With plenty of outdoor space on the double-decker boat, we took photos of thousands of birds along the rocky cliffs. A naturalist on board explained that about 120,000 northern gannets and at least 10 other species, including common murres and black-legged kittiwakes, are found on Bonaventure, one of the most significant and easily reached gannet colonies in the world.

On calm days, passengers can land at the island’s dock, view restored homes and hike across the island to view the northern gannets up close, but our captain wisely decided to turn back to town. He offered the option to go back on a later boat but we decided instead to stroll through the shops and galleries of PercÃ© and indulge in soft-serve ice cream cones.

We celebrated the July Fourth evening with grilled steaks and set out our camp chairs to drink in our panorama of a lighthouse behind us and the town’s two islands in front of us. The pierced rock glowed in a pink and lavender sunset and, inside after dark, we watched the sparkling lights of the town through our windshield.

After three relaxing days we headed out again and soon realized that the French atmosphere of the province was becoming more English along the south coast. Signs, Anglican churches and place names like New Carlisle and New Richmond graced this area where descendants of Irish, Scottish and loyalists joined earlier Acadian settlers.

We pulled into our final campground at a modern resort and marina operated by the town of Carleton-sur-Mer. Our waterfront full-hookup site was by the beach at the end of a strip of land jutting into Chaleur Bay with the Chic-Choc Mountains looming above. The complex promised a full menu of outdoor activities: golf, hiking and cycling, as well as water sports like windsurfing, kayaking and boating.

But high winds and a rainy spell left us content to watch whitecaps on the bay from inside our cozy RV. We had come to the GaspÃ© Peninsula for relaxation and had found it, and more. Spectacular views, easy navigation, waterfront camping and plenty of fresh seafood all added up to a perfect summer vacation – with just the right touch of French flair. 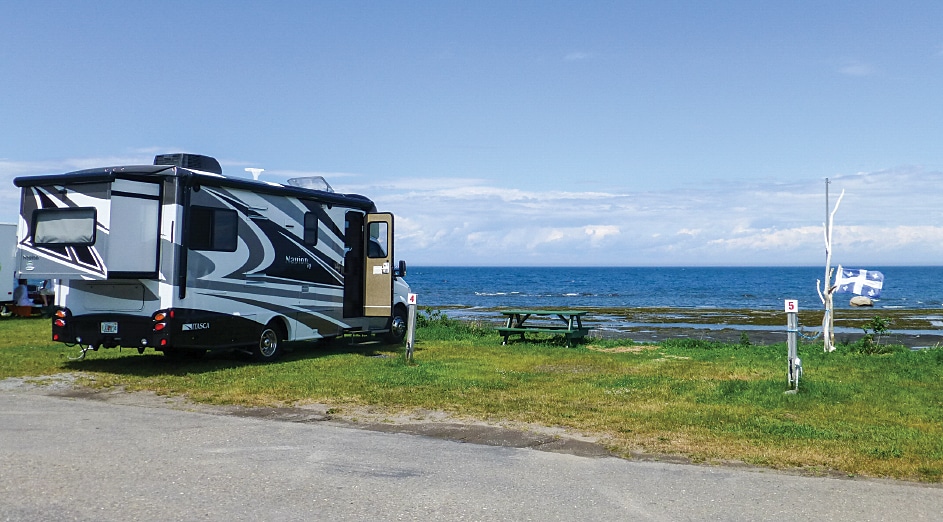 Reservations are rarely needed, but call ahead if you plan to visit around St. Jean Baptiste Day (June 24) and Canada Day (July 1).